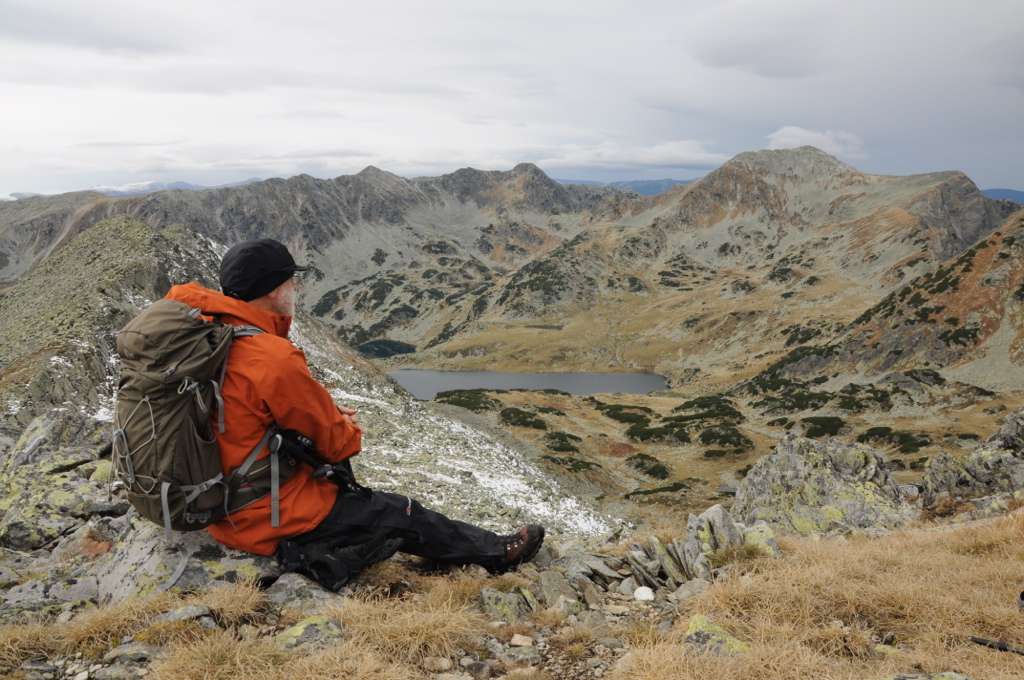 It was the start of a three day walk into Romania’s Retezat Mountains. Nik, my son-in-law, and I were going with Iulian Panescu, a mountain guide and photographer. Instinctively I’m not keen on being guided in the mountains, preferring to do my own thing. However, I began to consider the advantages of being with somebody with local know-how after learning of the aggressive Romanian sheep dogs. Iulian knows what to say and do with such creatures like a Transylvanian Crocodile Dundee. Also, local maps are not always reliable.

The Retezat Mountains are one of the highest massifs in Romania, being part of the Southern Carpathians. The highest peak is Peleaga, at an altitude of 2509 metres.

For some time we had been wanting to visit these mountains whose 80 lakes seem to mirror the sky. The Retezat region was Romania’s first national park and has over twenty peaks higher than 2000 metres (over 6,500 feet). It is strictly protected both nationally and internationally. 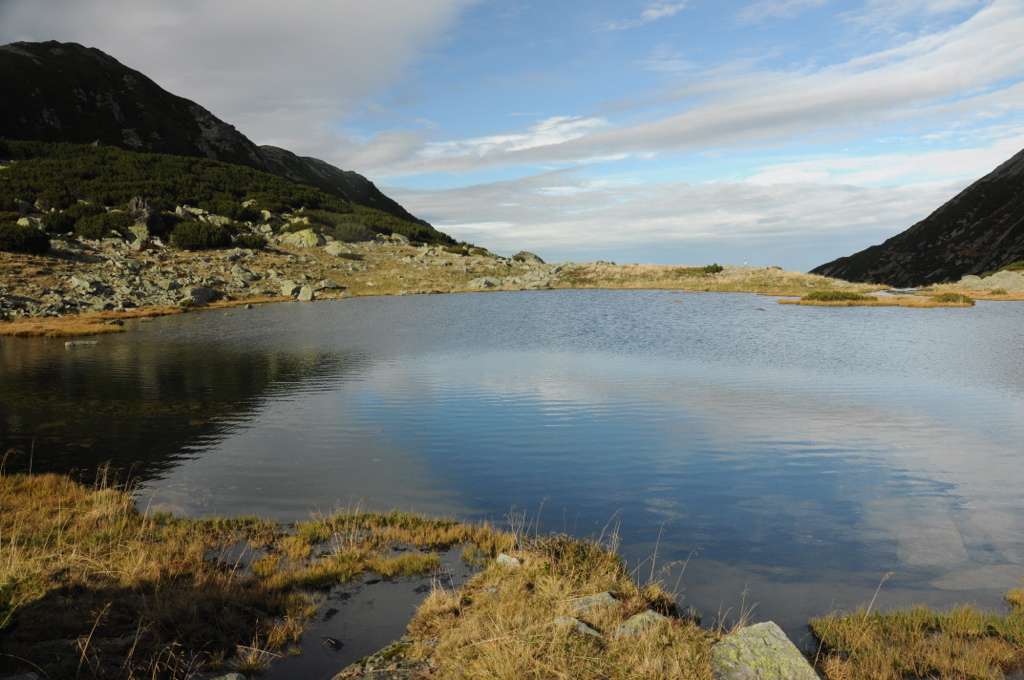 We strode upwards on a path into an autumnal mountain forest. Leaves, like free-fall butterflies, fluttered downward as we zig-zagged between tangled roots, colourful fungi and scattered rocks. We settled into our stride.

After six kilometres of walking, we spotted Gentiana Cabin, our temporary abode. I regard all mountain huts as places of undeniable charm, simply because of their very location. This cabin was more than able to wear that mantle with its attractive wooden construction and cosy situation amid the trees. Inside, a huge shiny Transylvanian terracotta stove provided the majestic centre piece for the interior along with solid wooden bunks, chairs, tables and solar powered light. Petre, the hut guardian, brought us all large mugs of mountain tea and so we ate a little, enjoyed some chatter, laughter and then crawled into our sleeping bags but not before a meditative moment staring at myriad of stars that shone from every corner of the crystal clear sky. 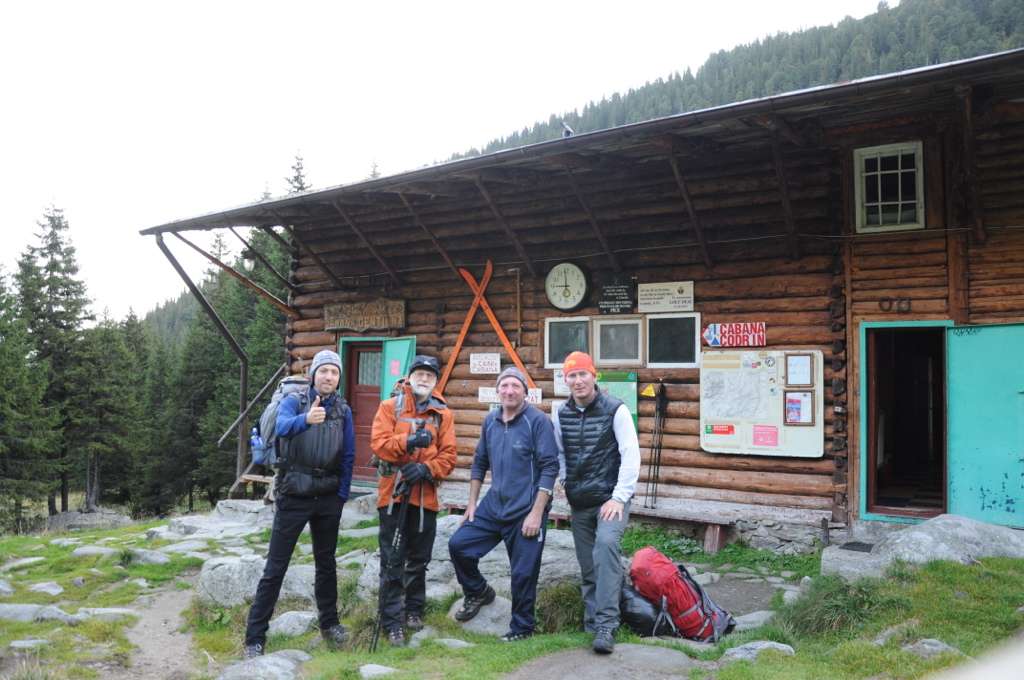 The following morning Iulian led the way up the Valea Pietrele through thinning trees, onto a stony path and into a zone of one metre high dwarf pines. We came across the paw-print of a bear; its claw marks were easily discernible where it had tried to steady itself over the mud. There are estimated to be around 6,000 bears in the Romanian forests, one of the largest populations in Europe that roam around the park fauna along with chamois, wolves, lynx, otters and marmots.

Eventually we arrived at Pietrele Lake, the first of many ‘blue eyes’, born like all the other Retezat lakes, at a time when glaciers were receding. Higher, we entered a vast world of pure rock. Facing us was a ridge of pinnacles and sculptured rock faces.

“Valeu Pietrele translates as the Valley of the Stones”, explained Iulian. 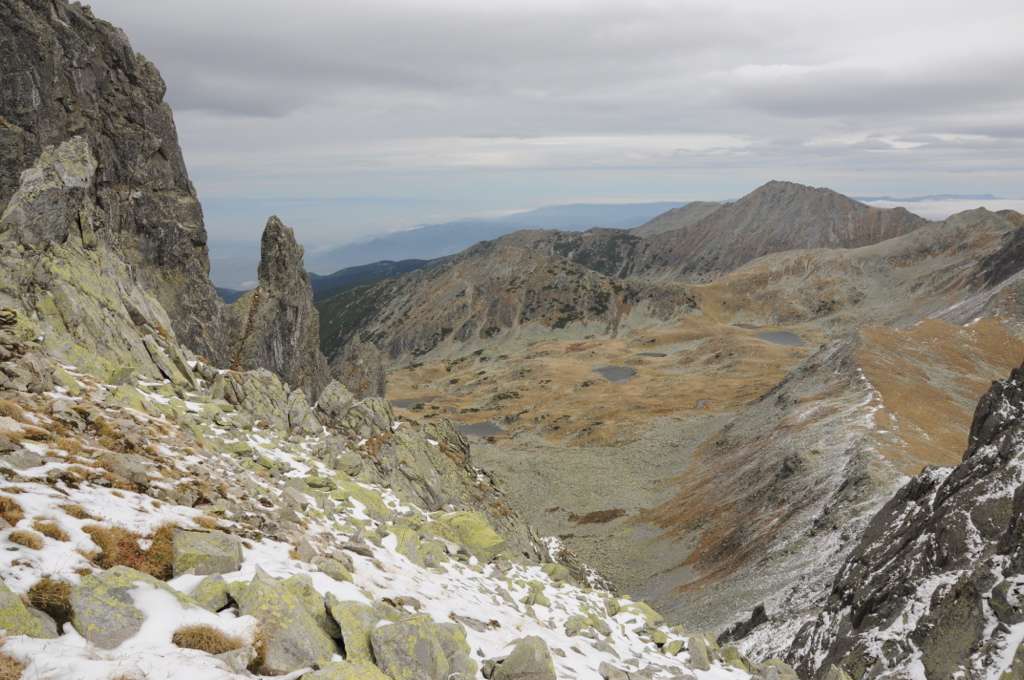 The Valley of the Stones (c) Iulian Panescu

Now, as a professional guitarist, such imagery provided Nik with much to muse upon as he began seeing the features of his ‘Stones’ heroes, Jagger, Richards and Watts, within each weathered slab of rock. As the path zig-zagged to the saddle of Curmãtura Buccurei we could now see over into the next valley and a further four tarns. Even on an overcast day such as ours, these glacial lakes possessed a turquoise and mystical gaze. Iulian pointed to a scrambly route ascending Bucura Peak at 2433 metres (7982 feet). From a summit of stacked rocks the panorama revealed numerous peaks with draping ridge lines and yet more glacial lakes.

We began clambering downward and then along a ridge towards our next peak. Peering into the valley below us, we counted over a dozen chamois grazing on patches of grass, no doubt stocking up before the inevitable onset of winter.

We reached the final scramble which would take us to the very top of Peleaga Peak, the highest of the Retezat mountains at 2509 metres (8231 feet). Snow and ice had gathered beneath a Romanian flag fluttering in the wind. Standing at the top we enjoyed a spectacular view of the entire Retezat mountain area with its peaks, ridges, valleys and shimmering lakes. A truly breathtaking scene. Luckily the weather remained clear but the cloud-base was gradually sinking. 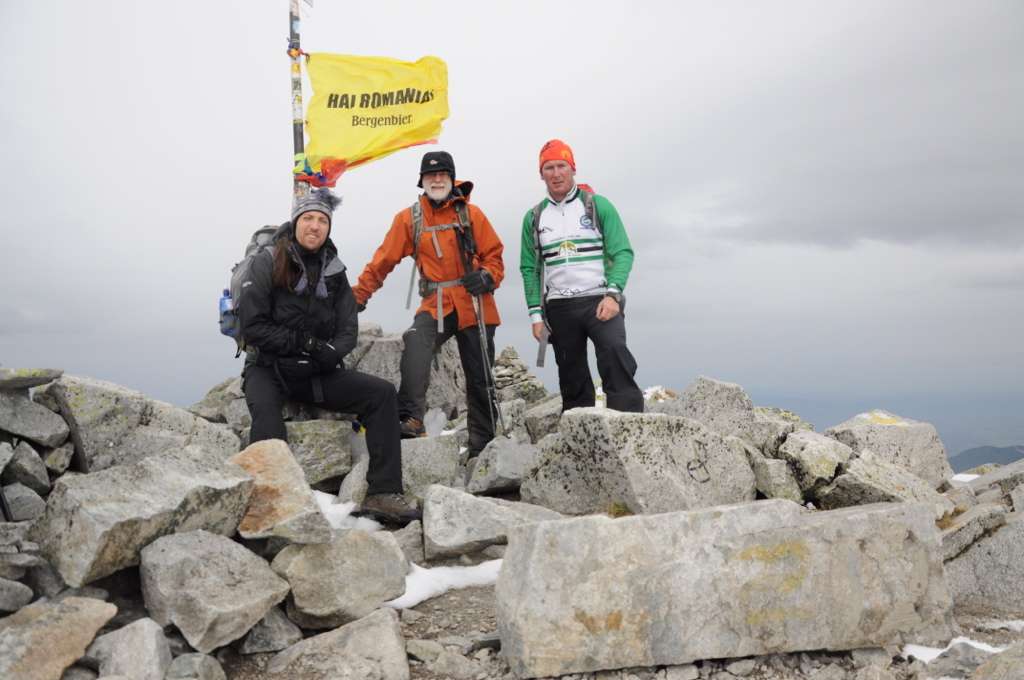 At the top of Pelage Peak, the highest summit in the Retezat Mountains (c) Iulian Panescu

Our day continued down the other side of Peleaga Peak. We paused briefly out of the wind to allow Iulian to photograph a nearby chamois scrambling amongst the rocks. The sure-footed deer with its brown coat, cream facial dapples and short curved horns searched for morsels of autumnal vegetation. In the far distance we noticed another mountain called Retezat Peak standing with a rather obvious truncated summit. Legend says that as two giants fought with their swords, the very top of the mountain was sliced off.

Our rocky meander descended down to the large Bucura Lake. Next to it was a small refuge, where we took a break. The cloud had followed close behind us as we had descended. We sat enjoying our food under the lean-to of this small hut just as drizzle began to gently fall. Continuing, we walked around Bucura Lake and on up to the saddle of Curmãtura Bucurei once again. We then retraced our steps back to Gentiana Cabin where a considerable amount of food, mugs of tea and some beers were enjoyed. 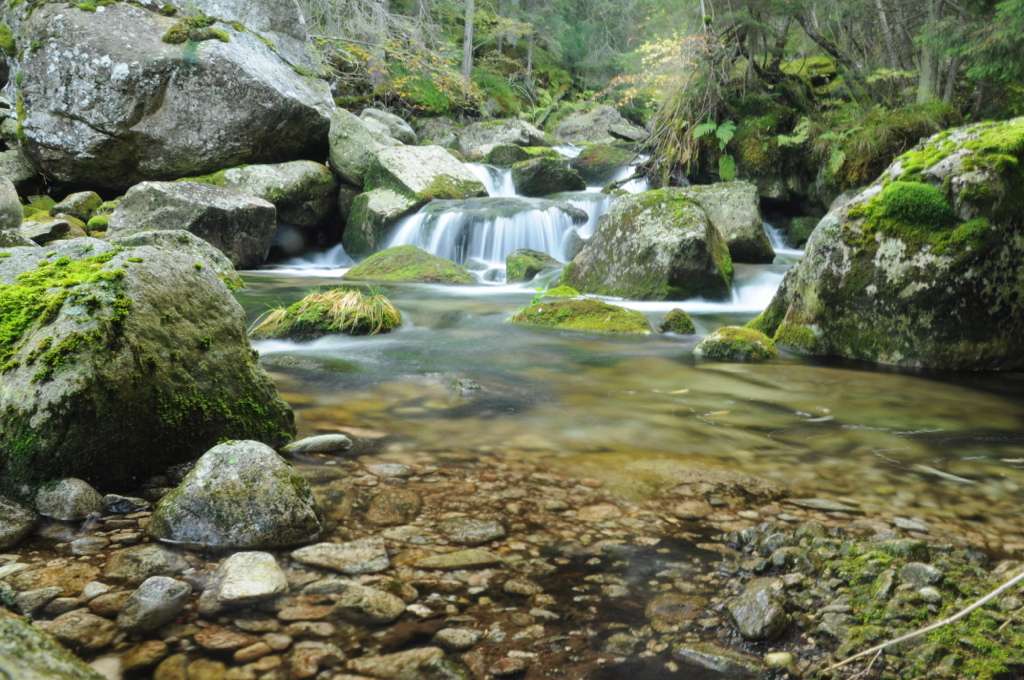 After another night in our mountain hut, we said our farewells to Petre and walked back down through the trees. We stopped periodically to enjoy and photograph a number of incredible forest waterfalls on our way back to where our trip had begun. It was agreed, the Retezat Mountains were indeed spectacular – the descriptions had not deceived! For those who love mountain environments with an abundance of nature, this corner of Romania just has to be visited.