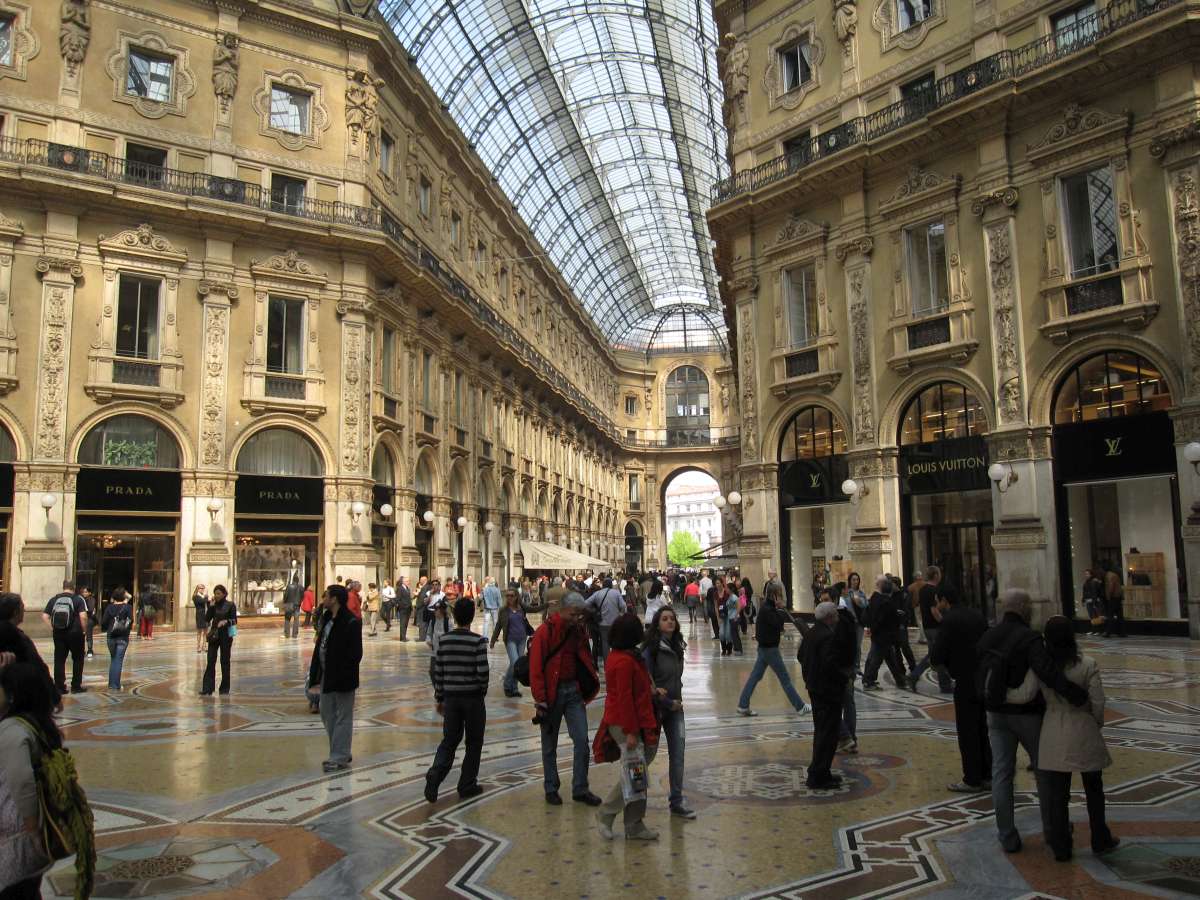 Milanese architecture is nothing to write home about, the streets are mundane decorated only with graffiti and apart from a few choice sights such as the stunning Duomo Cathedral, Milan is somewhat ordinary.

Yet Milan remains a popular short break destination mainly because shoppers love to travel. It’s absurd, but shopping abroad seems so much more of an event than doing it back home. The couture that makes it into your suitcase feels like a piece of wearable culture. Better still if it’s a bargain!

So, if retail therapy is what you are after, here’s where to look:

The best designer shopping Milan is within a rectangular shaped area dubbed Quadrilatero d’Oro or golden triangle. In particular, the most stylish streets are Via Montenapoleone (known locally as Monteapo) and its parallel street Via della Spiga. The two are connected by Via Sant’ Andrea. It’s hard to believe that the entire length is a mere fifteen minute walk because with designers such as Gucci, Prada, Versace, Valentino and Ferragamo in Via Montenapoleone; Dolce & Gabbana, Gigli, and yet more Prada in Via Spiga; Armani, Fendi, Trussardi and Missoni in Via Sant’Andrea it’s easy to spend a whole day in this tiny section of Milan.

Fashion of the more terrestrial sort can be found in the pedestrianised area of Via dei Fiori Chiari (by the Brera museum) and in Via Solferino. There are also shops that cater to those who love to wear designer clothes for less such as shoe shops and warehouses selling off last year’s designer styles in Corso Buenos Aires, near the station. Factory outlets such as R J Outlet (Via Zumbini 37) offer good value on all the designer clothes as does Vestistock (Piazza Lavater Via Ramazzini, 11) for leather bags and shoes.

Design lovers should also cross over Piazza San Babila – at the southern end of Via Montenapoleone – to Corso Monforte, Via Durini and the surrounding streets which are overflowing with showrooms selling fabulously designed chairs, lamps and vases.

The trendy area around the Navigli with its lattice work of canals just outside the centre, is Milan’s version of Portobello Road, with antiques, ethnic shops, secondhand fashion and record shops.

The sales – saldi – happen in January and July. Expect discounts of up to 50%. These are also the times to buy the latest must-have fashion items from the new collections before everyone else.

Milan is especially renowned for its twice yearly Fashion Week which takes off at the end of February and the beginning of October. Though you may well bump into celebrities and well heeled fashionistas, it is an extremely hectic time in Milan.

Opening times are generally 9.30am-1pm and 3-7.30pm, though a number of the boutiques and larger stores stay open through the lunchbreak. On Mondays, food shops are open only in the morning, other shops only in the afternoon.

Depending on the exchange rate, prices in the big-name Italian designer boutiques are anywhere between 20% and 40% less than in London or New York. Shoes are worth buying too: try the two Alfonso Garlando shops, facing each other at the lower end of Via Madonnina, near the Brera or La Vetrina di Beryl (Via dello Statuto 4). If you find yourself buying more than you can carry, the designer boutiques are happy to arrange for shopping bags to be sent back to the hotel. The larger hotels, such as the Four Seasons, ensure that their guests get the star treatment by ringing ahead to fix appointments.

For sheer opulence, luxury and ‘superbe’ service try Four Seasons Hotel. A dramatically reborn 15th century convent with 118 rooms and suites, the intimate Four Seasons is just a few steps from Milan’s couture houses and financial district on the exclusive Via Gesù, between Via Montenapoleone and Via della Spiga.

For a designer experience, try Hotel Principe di Savoia. There’s a free limo service to take guests to the front door of Versace, and from spring you can request Luxury Portal TV, a new service that puts guests at the top of the toughest designer waiting lists.