Alpe d’Huez is one of France’s biggest self-contained ski areas with 250km of piste. There are big beginner areas, one on the edge of the old town, the other in the more modern Bergers section, both connected from late 2018 by the Alpe Express gondola. A charmingly retro dustbin lift – people stand in a series of waist-high cages – still rises slowly through the resort.

There are hotels in the old part of town, apartments a walk away and the charming Altiport ski-in ski-out village of chalets on a hill with views across the resort. 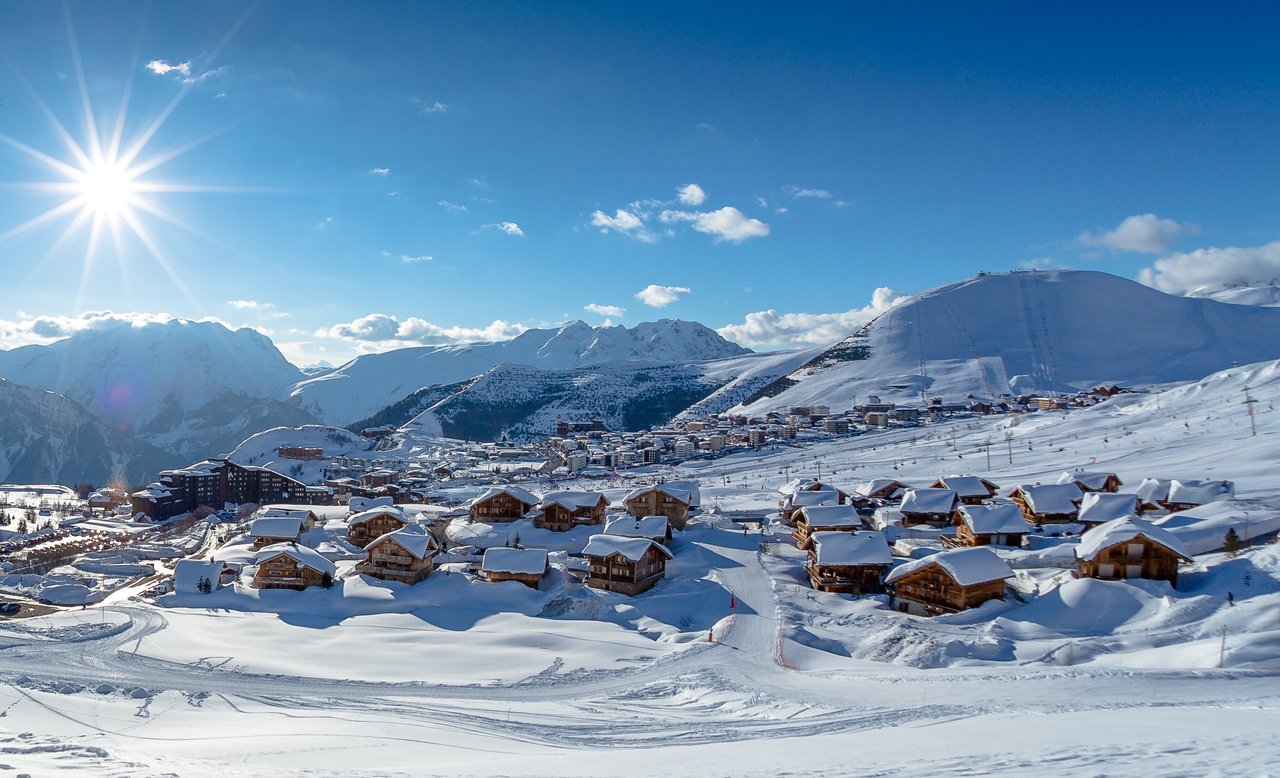 Unlike many purpose-built French resorts, Alpe d’Huez has a sense of permanence, the old and new parts sitting pleasantly side by side.

There’s plenty to do here off the slopes – the big, heated open-air swimming pool is always a delight, there are plenty of bars and restaurants and March 2019 saw the first Tomorrowland festival, a coming together of music, dance and more on an extravagant collection of outdoor and indoor stages.

But while there’s plenty of night time action, this is also a big family destination with easy runs from one side of the resort to the other.

The skiing at Alpe d’Huez

Look around you and you can ski just about everywhere – not least straight up the middle. The DMC, a two-stage gondola, heads up to Lac Blanc at 2,700m and there the Pic Blanc cable car takes you to the resort’s 3,330m high point on the glacier.

Here is the Sarenne, a 16km black run, the Alps’ longest (although after a tense start the latter stages are easy) all the way, with the aid of one chairlift, back to resort. The top also gives you the Tunnel, a cut through the rock on to a steep, bumpy hair-raiser. And there are easy glacier runs ( if you can face the looks people give you when you take the cable car back down).

From the Bergers base area in the new part of town the Marmottes chair and twin-stage gondola accesses the glacier while missing the steepest runs.

But while there are plenty of black runs around the place, Alpe d’Huez is somewhere for cruising, with long, easy reds and blues. All the way down and round to the village of Vaujany right down at 1,250m (you might have to hop on a lift for the final bit before the cable car back up).

Reds pour down from the Dome des Rousses and there are endless options down to resort on several sides of the snowy bowl. One side, Signal, gives fast pistes on the other side of a ridge, down to the village of Villard while there are mostly easy-going runs on the Auris slopes.

Wherever you find yourself there’s almost always another way down – which is great for families as there’s little chance of getting trapped at the top of a black, although there’s always an option for something just a little bit more demanding

The ambiance: All the convenience of a modern resort but with something older at its heart. And the Altiport area is different again, a 15-minute walk or free shuttle bus from the centre – it’s right by the little airport used by light planes and helicopters and has its own Restaurant l’Altiport, snug and traditional, serving a first-class raclette, the dish involving a half wheel of cheese under a heater, melting on to potatoes and cold meats.

The scenery: Jagged Alpine backdrops at their best, Mont Blanc in the distance, the resort spreading out and lifts heading off in all directions, most up but some down, into a ravine to Auris En Oisans 1600, or down the mountain to Huez 1500.

The skiing: It’s a big place with lots to do involving very little effort – there’s little accommodation that is more than a couple of minutes from the slopes.

And there are long runs to the handful of villages which give the feeling of going on a journey rather than simply being on lifts all the time. And within several seasons there should be a lift connection to the resort of Les Deux Alpes, creating one of the world’s biggest ski areas with almost 500km of runs.

The X Factor: The jetsetter ambiance of a helicopter transfer to nearby resort Les Deux Alpes. The flight takes less than 10 minutes but the views are awesome as you see the lifts and runs of both resorts from on high.

Le Signal 2108: Contemporary restaurant and bar that’s a world away from the French self-service places of yesteryear. There’s a neat, glass-walled dining area and a discreet terrace that keeps most tables tucked away from any breezes – but still opens up views across the resort from the top of the Signal area. Think dishes such as seared tuna with risotto, or a chunky lamb shank. Downstairs is a colourful sandwich bar with seating.

La Folie Douce: One of the small chain of all-singing, all dancing mountain-top apres-ski haunts. The place for a stylishly modern meal on the terrace, if you don’t mind oddball performers in leather and tights. The teriyaki-battered cod with string-like fries was excellent. As the afternoon goes on things get louder. All done with raffish nightclub style, there’s a throbbing outdoor bar area – but rather chilled interior with a posh snack bar too.

Expensive: The five-star Daria-I Nor opened in December 2018 and, named after the pale pink beauty of the famed Koh-I Nor diamond, you know it fancies itself to shine. Lots of aged wood, rich velvet and diamond motifs and, despite only 37 rooms, there are three restaurants: the haute cuisine of L’Améthyste, tasting menu of La Table du Daria and casual dining in the sophisticated lounge bar. Swimming pool and all the trimmings. Doubles from €195 (£170) per night, B&B.

EasyJet offers return flights to Lyon from various airports including Gatwick, Stansted and Luton from £30 single. Ski France’s sister company, MV Transport, has transfers from €440 (£380) for eight. Car rental is available at the airport.