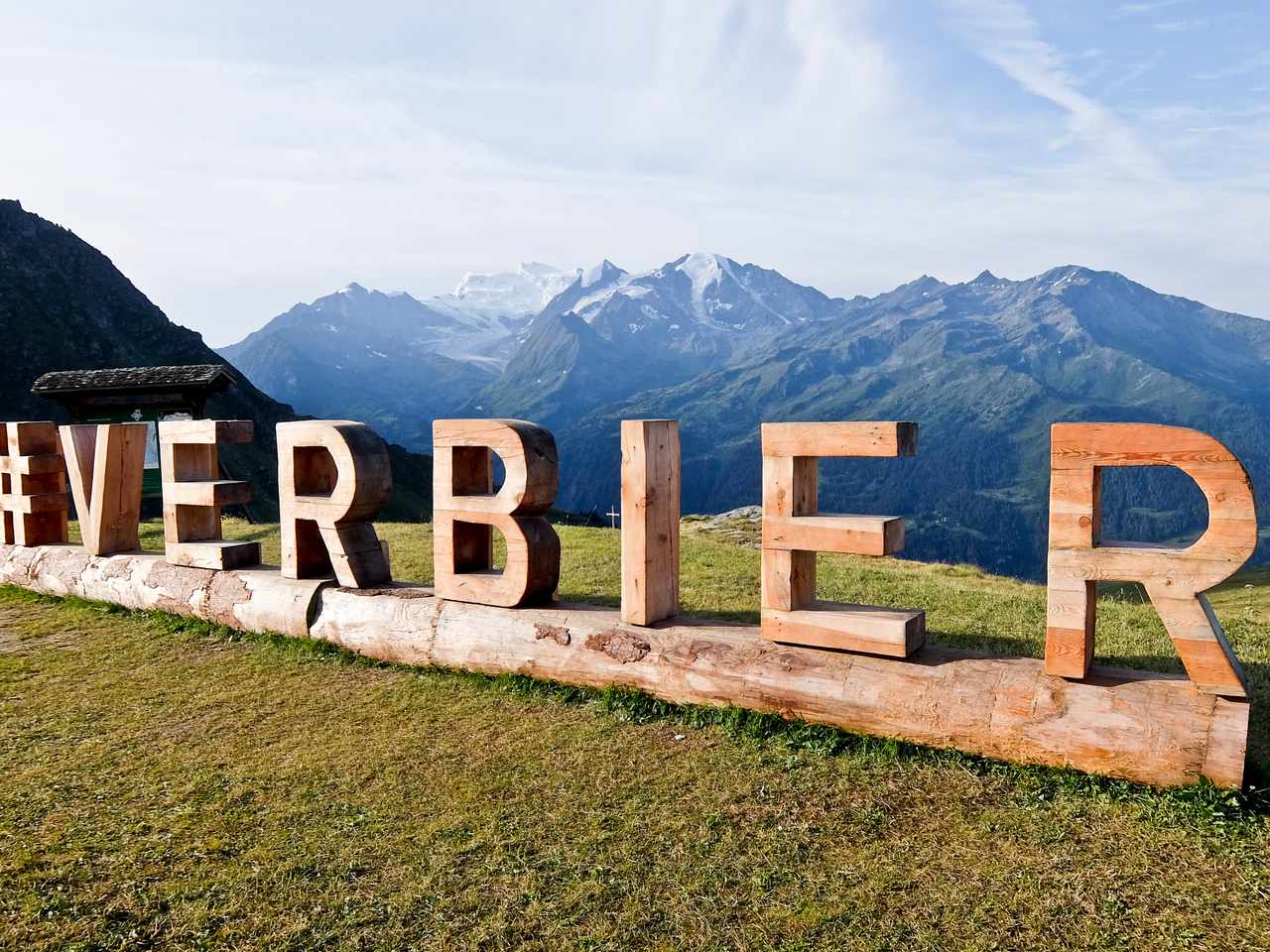 Verbier, along with other alpine ski resorts, wants tourists in the summer as well as the winter, and they’ve devised a special offer. Every hotel guest, staying one night or more, is entitled to the Verbier Infinite Playground (VIP) Pass.

This grants free travel on cable cars and postal buses plus a reduced price or free entry to more than 25 activities. It sounds like fun, so I set off to give some of them a try 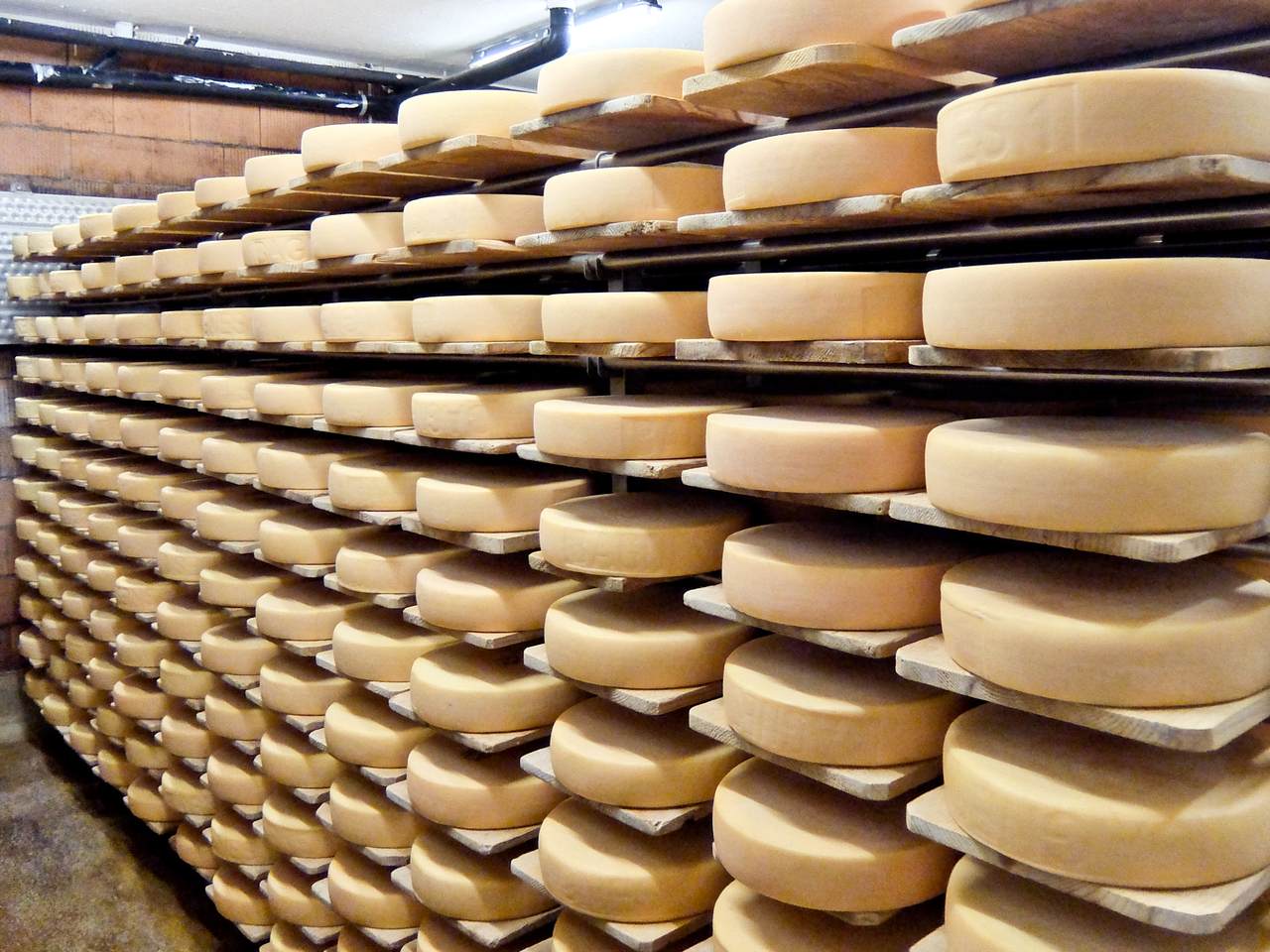 The day I arrive it’s raining heavily so it makes sense to retreat to the indoor workshop at La Laiterie de Verbier. Marc Dubosson is going to show me how to make traditional Tomme cheese so I put on my apron and take my place at my copper cooking pot.

He fills it with that morning’s milk and I light the flame underneath and start heating it up to 35C. When it reaches temperature, I add a small glass of bacterial milk culture and then some rennet and stir. I then let it cool whilst Marc shows me the cellar.

As well as Tomme, it’s crammed full of wheels of Raclette, all maturing. He makes 18-2000 wheels a year, each costing around CHF100, and a quick calculation shows that there’s more than half a million francs worth stored here. Back upstairs, the cheese has formed a skin which I’m told to cut it small squares. I then heat it up again, stirring as I go, then drain off the whey and put the curds into a mould and press. This is then washed in salt and a couple of days later I pick up my cheese to take home. 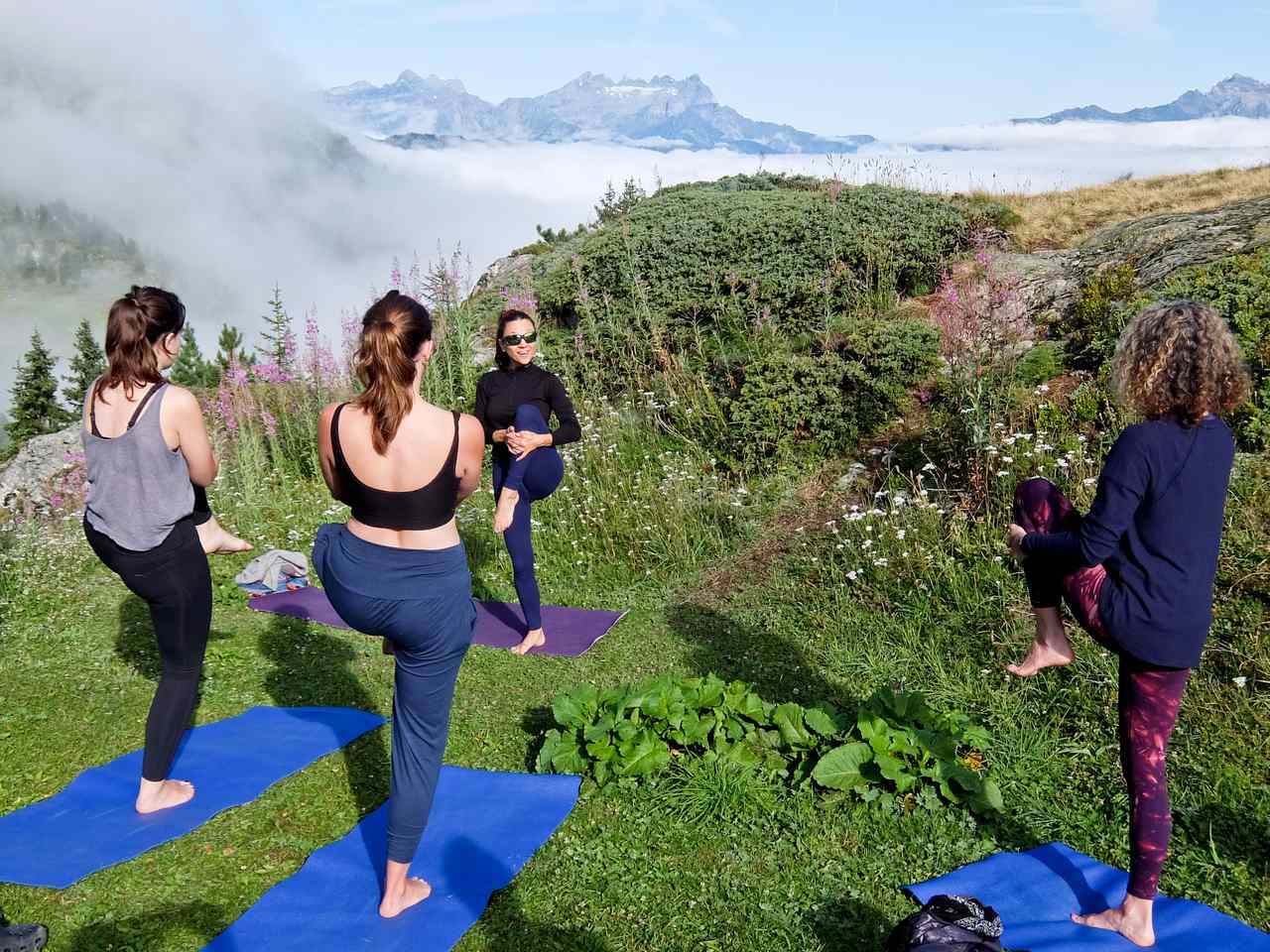 I spend the night at Cabane Brunet, a mountain hut at 2103m eating even more cheese. The morning dawns bright and the rain has stopped so I get a one hour yoga session on the grass outside provided by Wholeycow Studio. I can’t quite make the stretches of Svetlana Negashova, the brilliant teacher, but nobody is paying too much attention and it’s an idyllic situation. Relaxation, at the end of the session, when the only sound is the rushing of the stream, is the highlight.

Tour of the Alpine Pasture 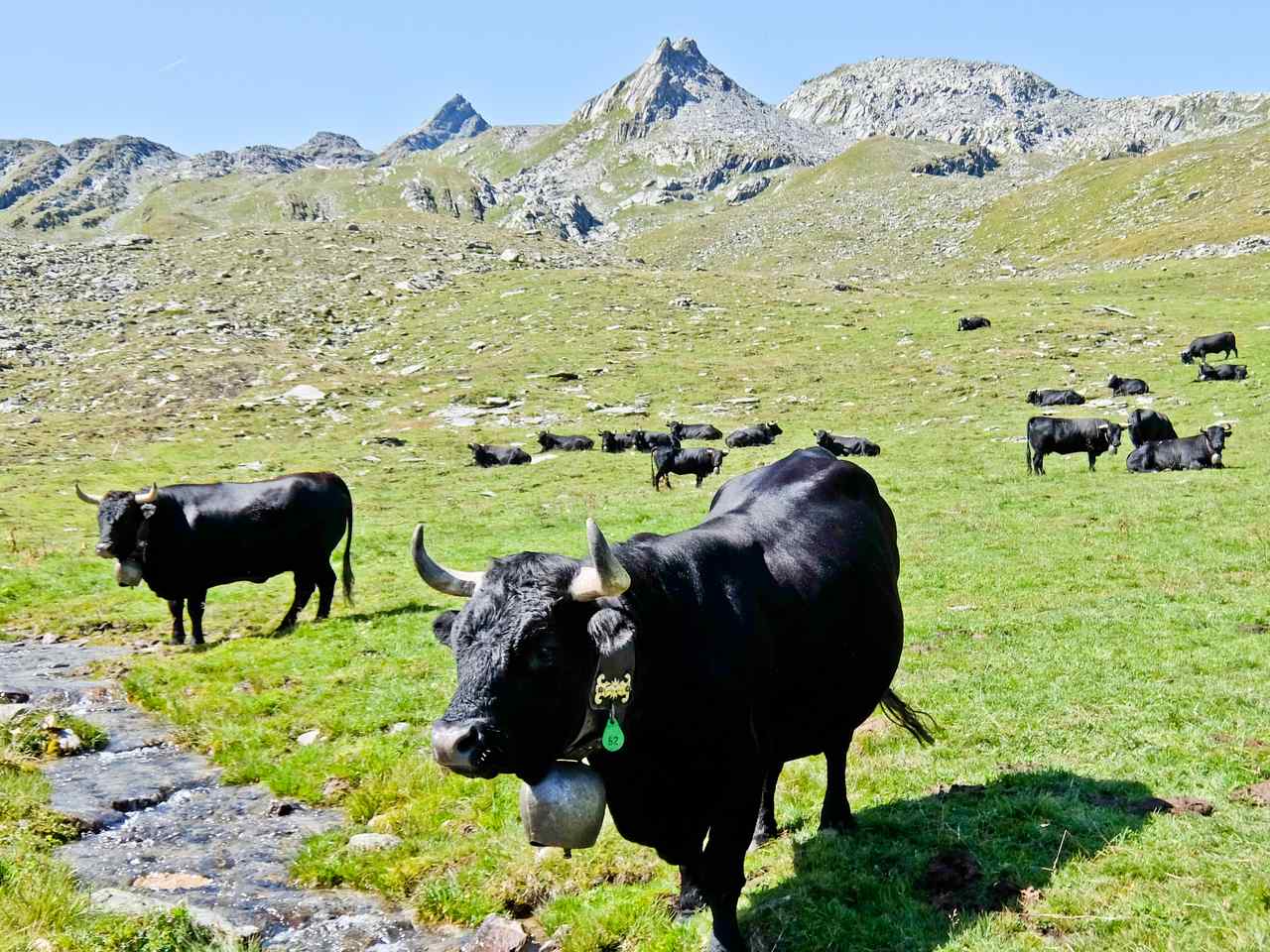 Above the Cabane is the alpine pasture of Sery and Marc Maret, my mountain guide, takes me up among the cows. These hardy Herens cattle are one of the smallest breeds in Europe and are well adopted to altitude. They’re black with a muscular body and relative short legs and very quickly establish their place in the herd’s hierarchy by fighting each other. This has led to a tradition of organised cow fights throughout the canton, with the winner being crowned Queen.

As it’s late summer, the herd’s hierarchy has already been established and there’s no sign of combat. Instead we eat lunch alfresco at 2200m with cheeses made from their milk. As well as Tomme and Raclette, there’s also a fresh variety called Serac, a type of ricotta. Homemade apricot preserves and rye bread complement the cheese and it’s all washed down with local wine. 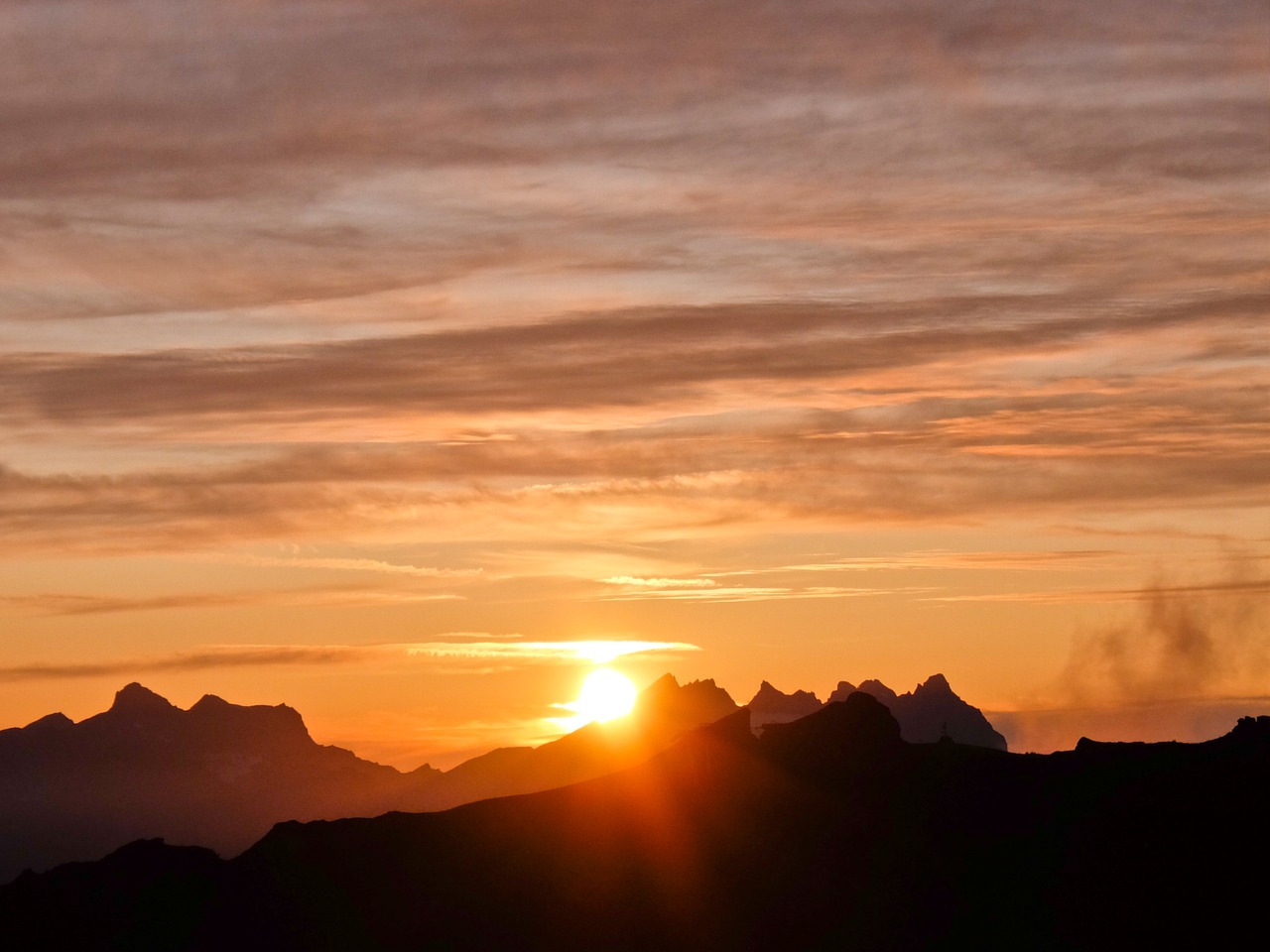 Later that afternoon I hire an Ebike in Verbier and take it up in the cable car to Les Ruinettes at 2200m. From here I follow a track through the outdoor sculpture park to Cabane Mont-Fort, perched precariously above the valley. There’s a tremendous sunset and it’s an early night as I have to be up at 4am. Next morning it’s dark as I ride the bike down to La Chaux, a slightly perilous descent with only my head torch to guide the way.

It’s also very cold, but the cable car takes me up to Mont-Fort at 3300m, then I climb to the summit on a roped path and wait. Of course I’m not alone, as there are quite a few people with the same idea of seeing the sunrise. As the light comes up there’s a 360° view of some of the most beautiful peaks of the Alps, including the Matterhorn, and Mont-Blanc. Unfortunately there’s some cloud so the sunrise is a bit of a let-down. The consolation is an excellent breakfast at the Igloo des Gentianes.

I pick up my E-bike back at La Chaux and cycle across the side of the mountain before descending to La Tzoumaz. There I meet Cherries von Maur who tells me that we’re going to forage for our lunch. She steers me past plants that might have been watered by dogs, before pointing out wild spinach, also known as Good King Henry. Apparently it needs cooking three times, otherwise you risk kidney stones. Dandelion leaves are also edible but it’s late in the season so they’re too bitter to eat.

Instead we collect nettles, braving their sting by pinching the tops with our fingers, and various edible flowers including fireweed and clover. Berries are out in force including wild strawberries and raspberries, but the surprise are the clumps of red lingham berries, lying close to the ground. Add some wild rhubarb and we have our dessert.

At the Maison de la Forêt we chop the nettles into the couscous she’s prepared earlier. There’s also the Serac cheese to spread on local rye bread which we top with the flowers. The fruits go into a pot to make a delicious compote. Local wine completes a tasty lunch.

I have my final dinner at the Hotel La Cordée des Alpes with Verbier ambassador Géraldine Fasnacht. She’s an extreme athlete and won the first of her three ski trophies at the Xtreme Verbier competition when she was only 21.

Needing something crazy to do in the summer, she took up parachuting and then base jumping, throwing herself over cliffs. Now she dons a wingsuit and flies off the top of mountains including the Matterhorn. She’s keen to teach this sport to others but, before you even think of joining her, you should watch her videos.

TRANSFER: The Swiss Transfer Ticket covers a round-trip between the airport/Swiss border and destination. Prices are £112 in second class and £182 in first class.

PASS: The Verbier Infinite Playground (VIP) Pass offers free entry or discounts to more than 25 of Verbier’s top activities and attractions and is available to every guest staying a minimum of one night in the region and paying the tourist tax.

TRAVEL PASS: The Swiss Travel Pass offers unlimited travel on consecutive days throughout the rail, bus and boat Swiss Travel System network. This pass also covers scenic routes and local trams and buses in around 90 towns and cities and also includes the Swiss Museum Pass, allowing you free entrance to 500 museums and exhibitions. Prices from £185 in second class.

Half board is available at Cabane de Mont Fort  and Cabane Brunet is available from June to September for £62 pp per night.

After a couple of nights on the mountains the 4* Hotel La Cordée des Alpes offers real luxury and has an excellent restaurant.  Rooms from £175 including breakfast.

A cheese making session at La Laiterie de Verbier needs to be booked in advance.

Verbier has information about the destination.