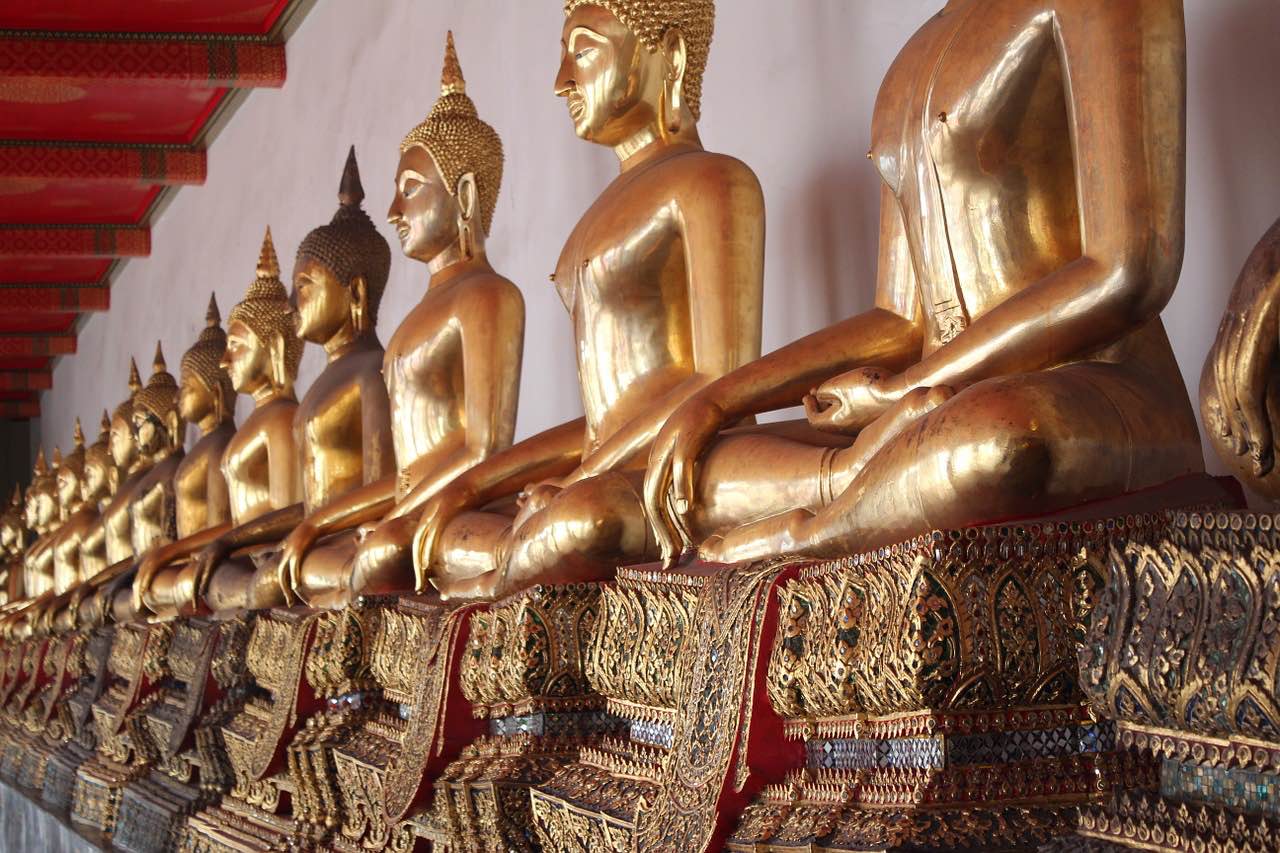 Who can resist Thailand with its legions of dazzling golden temples, idyllic beaches on paradise islands, bustling markets, pulsating cityscape, rural charm and the palate-pleasing cuisine? It was hard to decide: Bankgok or Chiang Mai? So we visited both.

In Bangkok we embarked on a less touristy journey while in Chiang Mai we ventured on a more spiritual escapade visiting the amazing temples and countryside.

Bangkok: Far from the madding crowd

Our guide Michai took us to the parts of Bangkok not frequented by tourists down narrow streets in residential areas to get an insight of how the locals live. In the blacksmith and goldsmith neighbourhood, there was a plethora of shops selling giant Buddha and religious statues for temples and private properties. 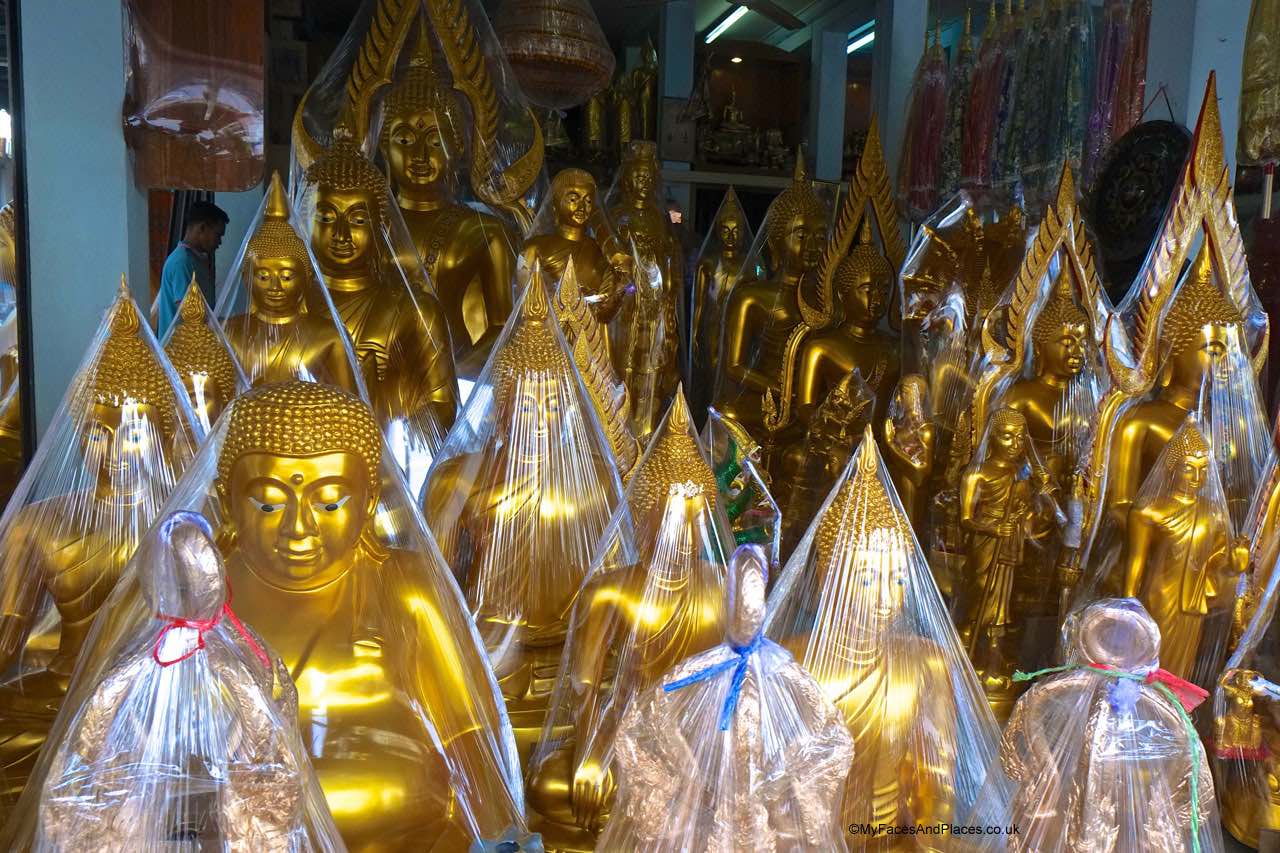 We strolled through the little India of Bangkok where the Indian community trade in shops and market stalls packed to the rafters with clothes, textiles, spices, electronics and all sorts of retail paraphernalia. Chinatown nearby is in a more prosperous area in Yaowarat Road where the thriving Chinese community is the largest trader in gold in the country and it is amazing to see so many shops glittering with gold jewellery alongside retailers of Chinese herbs, food and restaurants.

Temple of the Gold Buddha 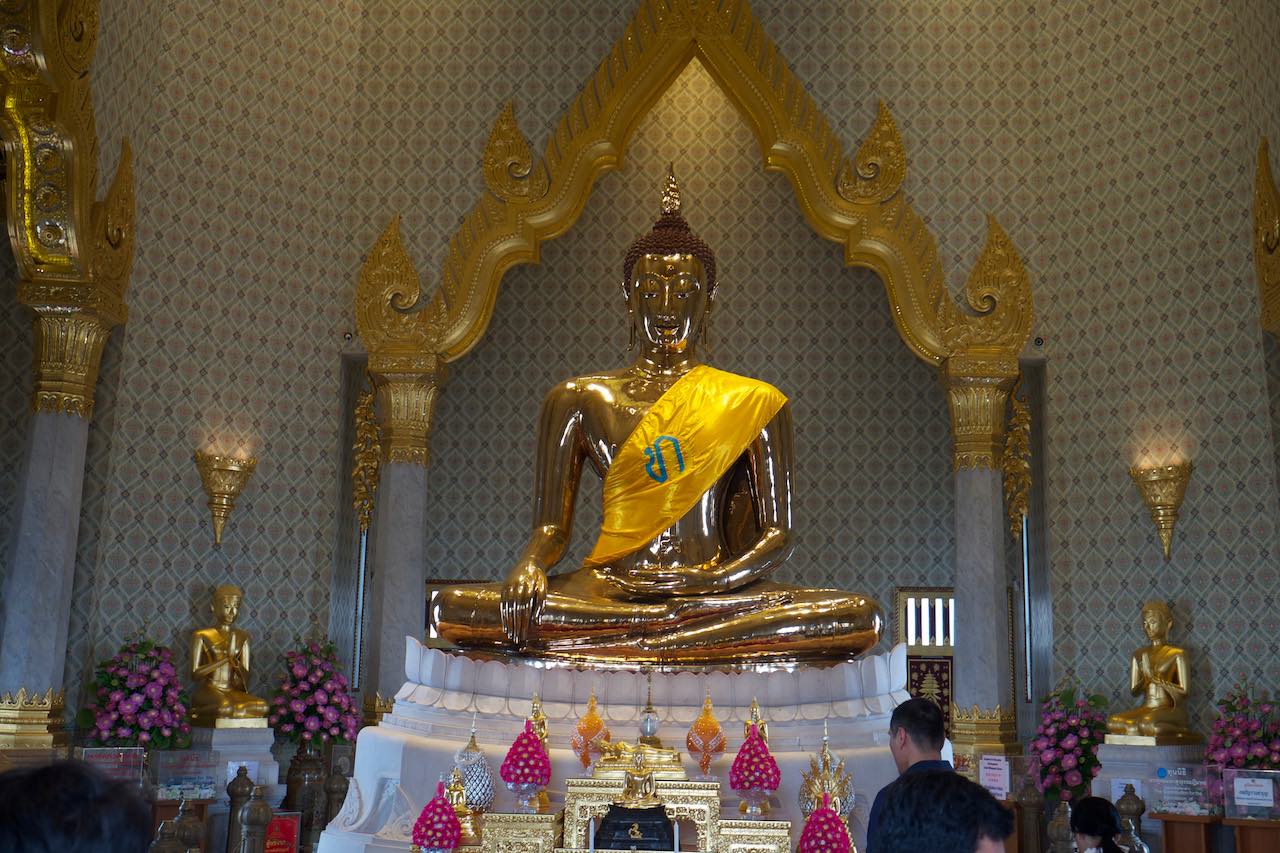 One of the most iconic temples in Chinatown is Wat Traimit or the Temple of the Gold Buddha. It is believed to hark back to the Sokhothai dynasty in the 13th to 14th century. The massive seated Buddha is 3.3 meters tall and weighs a hefty 5.5 tonnes in solid gold! The divine Gold Buddha is enshrined in a sacred chapel in the pinnacle of the temple under a golden pagoda. The vision of the resplendent Buddha in all its glory was spellbinding. 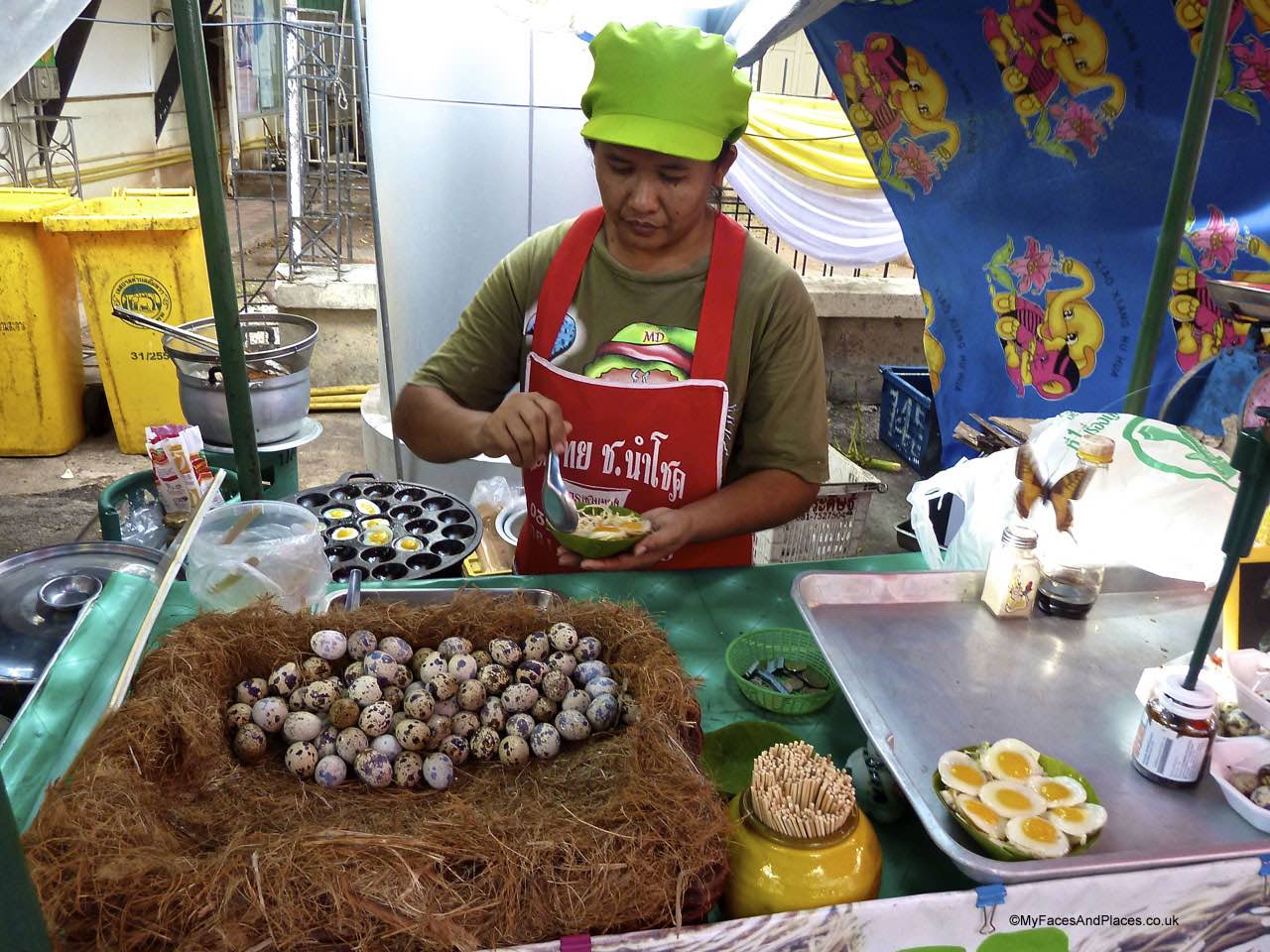 We wanted to get away from the usual touristy markets in Bangkok so we decided to skip town and checked out the suburbs. Our first port of call was Mae Klong railway market in Samut Songkhram Province, locally known as “closing umbrella market”. 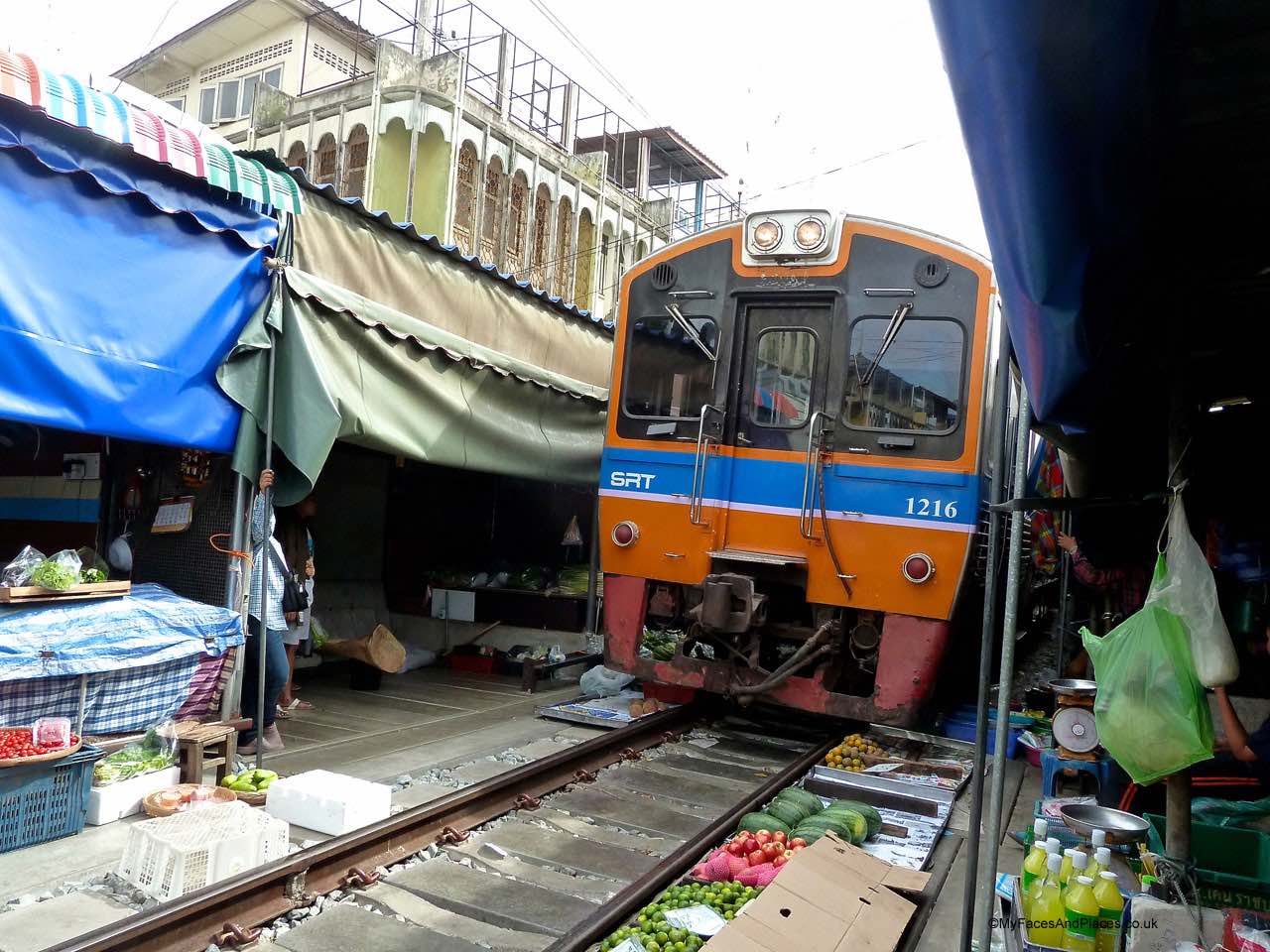 It was the most insane market I have ever seen. Stalls selling fresh seafood and farm produce literally set up shop inches from the railway tracks sheltered by awnings and umbrellas. At the witching hour an announcement bellowed out to the traders informing them how many minutes before a train approached to get ready to pull back their shelters. As the train approached sounding its whistle, the traders pulled back their awnings and umbrellas on cue like choreographed performers. As soon as the train moved on, it was business as usual. The train runs 8 times a day serving the small towns in the region. 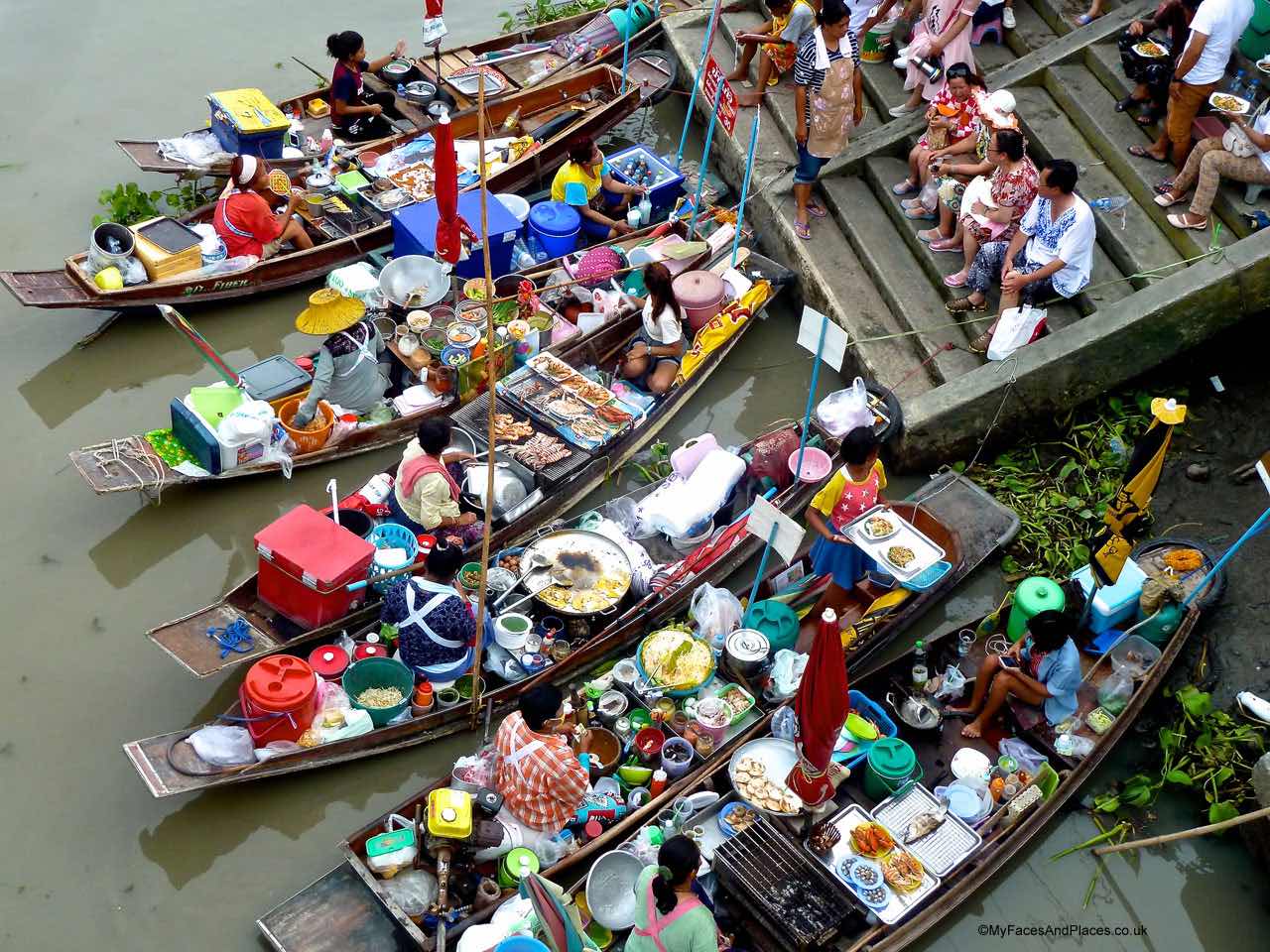 Next stop is Amphawa Floating Market, which only operates on weekend from Friday to Sunday from 12pm till 8pm. It is predominately for the locals who come in hoards to enjoy the street food and the carnival atmosphere. The place was heaving when we arrived to a delightful cornucopia of street foods all freshly prepared in front of us. A canal runs through the market where a fleet of sampans anchored by the bank were merrily grilling, boiling and frying seafood, meat and noodle in their small boats cooking up a storm. Diners ate sitting on the steps by the boats or on wooden stools in front of shops by the canal. We ate our way through the market eating for England. Burp!

Chiang Mai: Rose of the north

Chiang Mai, which means “new town”, was the ancient capital of the Lanna Kingdom founded by King Mengrai in 1296 to succeed the old capital Chiang Rai. It styles itself as a Creative City, vying for a place in UNESCO. The city is built around the Ping River, which the Lanna people believed is the home of the Naga, a mythical dragon-like serpent that guards the city. The city is renowned for its artistic flair as reflected in the beautiful Lanna architecture and marvellous works of art.

In The Realm Of The Gods 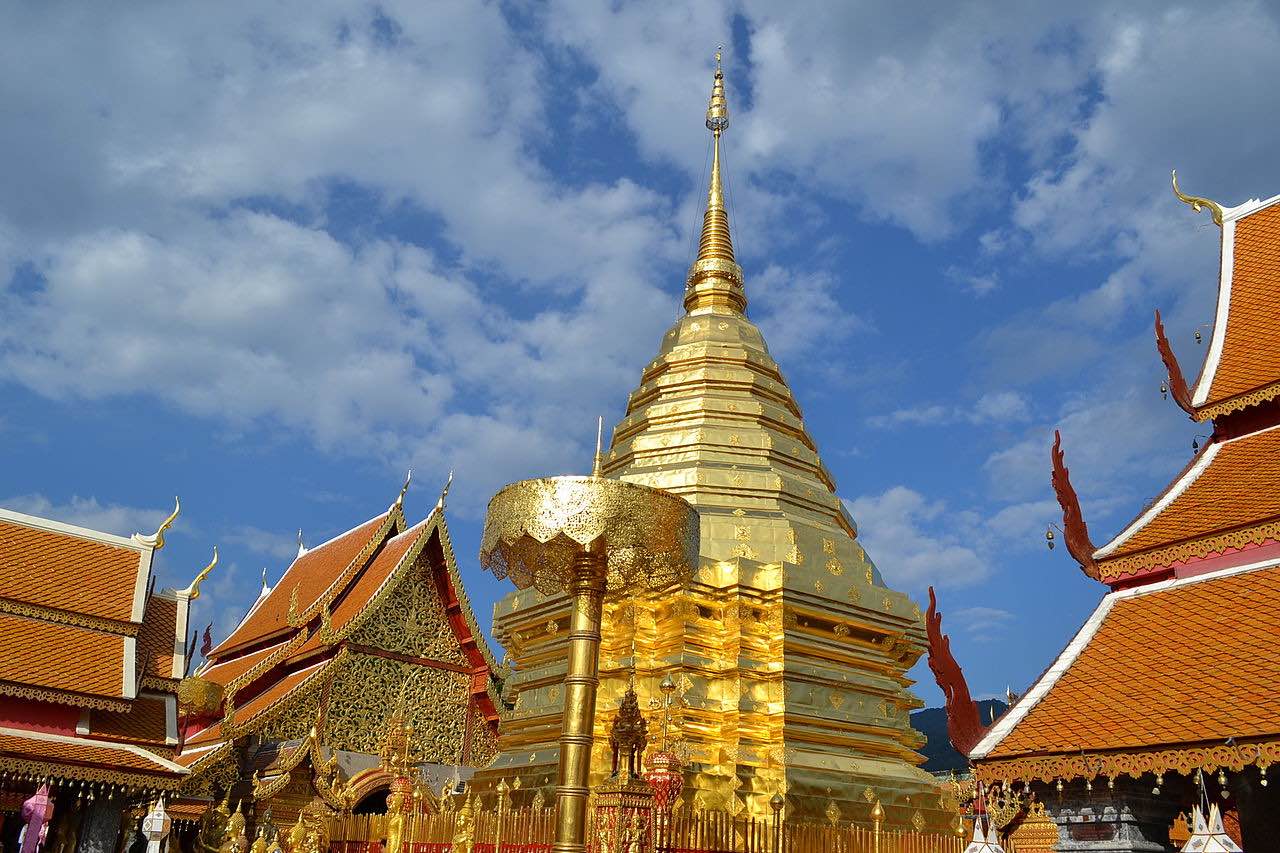 The highlights of Chiang Mai are the beautiful temples in the city and in the surrounds. One of the most important temples is Wat Phra That Doi Suthep, perched high up on the mountain 15km from the city. It was founded in 1383 on a site that a white elephant carrying a relic bone of Buddha was said to have chosen. The Wat is a glittering complex of golden temples, majestic pagodas and Buddha statues with a viewing platform that commands a stunning view of Chiang Mai. We joined the throng of devotees circumambulating the central chedi while other worshippers burned incense and made votive offerings to the plethora of Buddha statues surrounding the chedi.

While up in the mountain we visited the Doi Inthanon National Park nicknamed “roof of Thailand”, the highest point in the country at an altitude of 2,565 meters above sea level. The park was opened in 1972 covering an area of 483 square km of cloud forest and deciduous dipterocarp forest. The habitat is an ideal roost for many bird species making the park an ornithologist’s paradise. A Buddhist shrine in the forest and two Chedi temples dedicated to the King and Queen of Thailand loom mysteriously in mist. 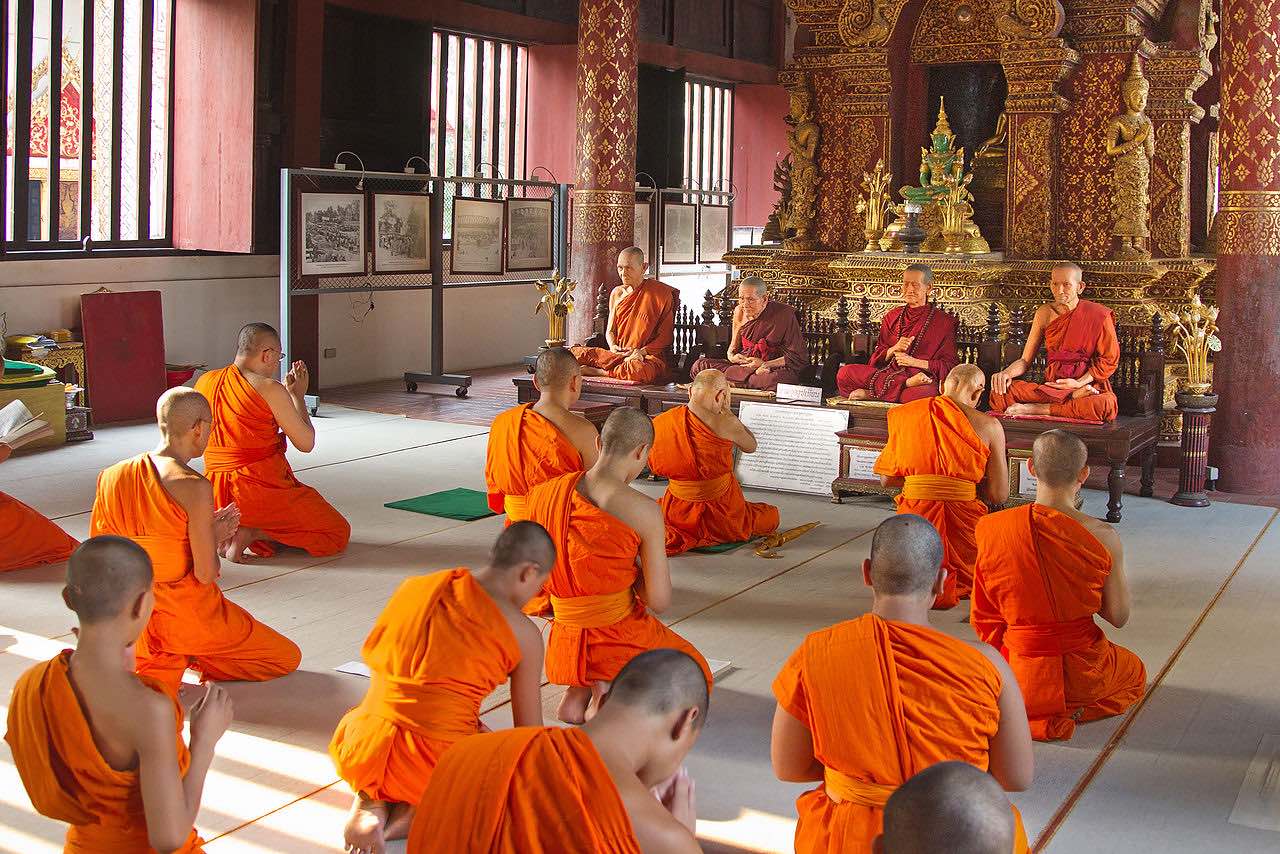 The most revered temple in Chiang Mai is Wat Phra Singh. It is a big congregation of glorious chapels, an ordination hall, library and monastery reflecting the splendour of the Lanna architecture. Gilded pagodas and ornate gabled roofs guarded by Nagas, ornamented carvings, stunning mosaic works and murals manifest the wealth of the temple and the immense skill of the artisans in this region. In the meditation hall monks in saffron robes are deep in meditation in the presence of magnificent Buddha statues.

Walk With A Local

For tours and great guides in Thailand (and worldwide), contact www.toursbylocals.com, a great source to find reliable qualified guides worldwide.

The Riva Surya in Bangkok is a charming boutique hotel in colonial style on the Chao Phraya within easy reach of major attractions in the city.

The Siam is an elegant luxury resort on the Chao Phraya oozing with style and class in historic Dusit district of Bangkok.

137 Pillars House in Chiang Mai is a stunning resort within a gorgeous garden steeped in heritage and exquisite Thai colonial architecture.