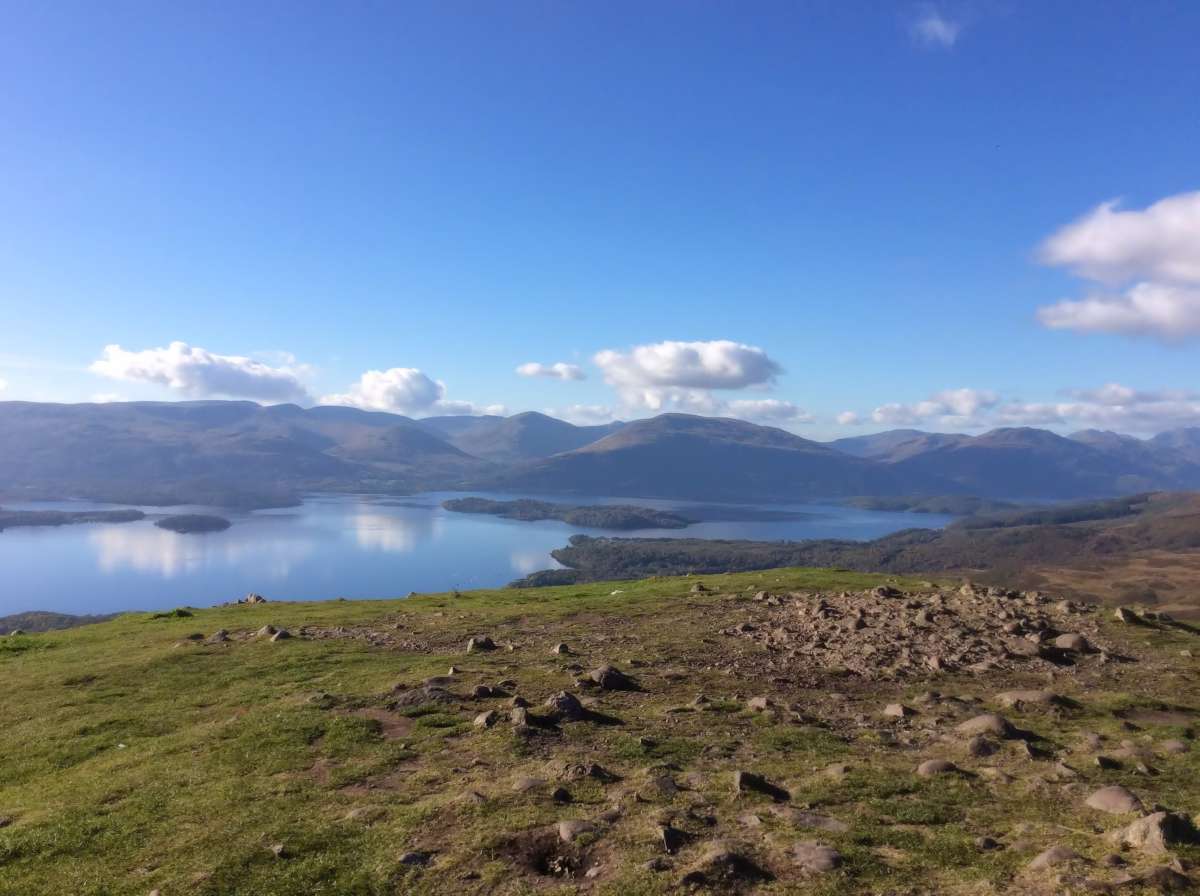 I had taken the high road and was about to explore the bonnie, bonnie banks of Loch Lomond which were all mine for the next three days.

This is Great Britain’s largest inland stretch of water and the surrounding national park, which is situated just 40 minutes on the train north of Glasgow, boasts some of the most spectacular scenery in northern Europe.

It’s a haven for anyone who has even a passing interest in the outdoors. Cyclists, walkers, wildlife enthusiasts and those looking to indulge in a spot of fishing can all fill their boots.

Arriving in late October, we fully expected a carpet of cloud and daily downpours. Alas, you’ve got to make the most of it. Get your waterproofs on and get out there and enjoy it.

But we hit the jackpot. Tee-shirt weather in Scotland, in late October. Not a cloud in the sky and warm enough that I returned home (I live in Southern Spain) with more of a tan than I had left with.

We started off at the picturesque village of Drymen, a popular overnight stop for hikers on the West Highland Way and about 8km inland from our intended Lochside destination of Balmaha.

Our path led us though some diverse scenery. Look one way and you’re presented with a tundra-like landscape that brings to mind the wilds of Alaska, look another and there’s the reds, golds and fading greens of autumnal conifers upon the rolling hills that surround the lake.

We walked for about 5km, enjoying the rich tapestry of landscapes on offer before rising up Conic Hill’s sharp little summit and taking in dramatic views of the Loch and its many islands.

A row of lush, verdant islands, glistening like jewels in the early afternoon sun. I imagined I was in Fiji, Australia’s Whitsundays or somewhere else equally tropical. But then, my partner handed me a can of Irn Bru (a local fizzy soft drink) and I knew I was far from the tropics. I was most definitely, without question, in Scotland. And I was loving it. 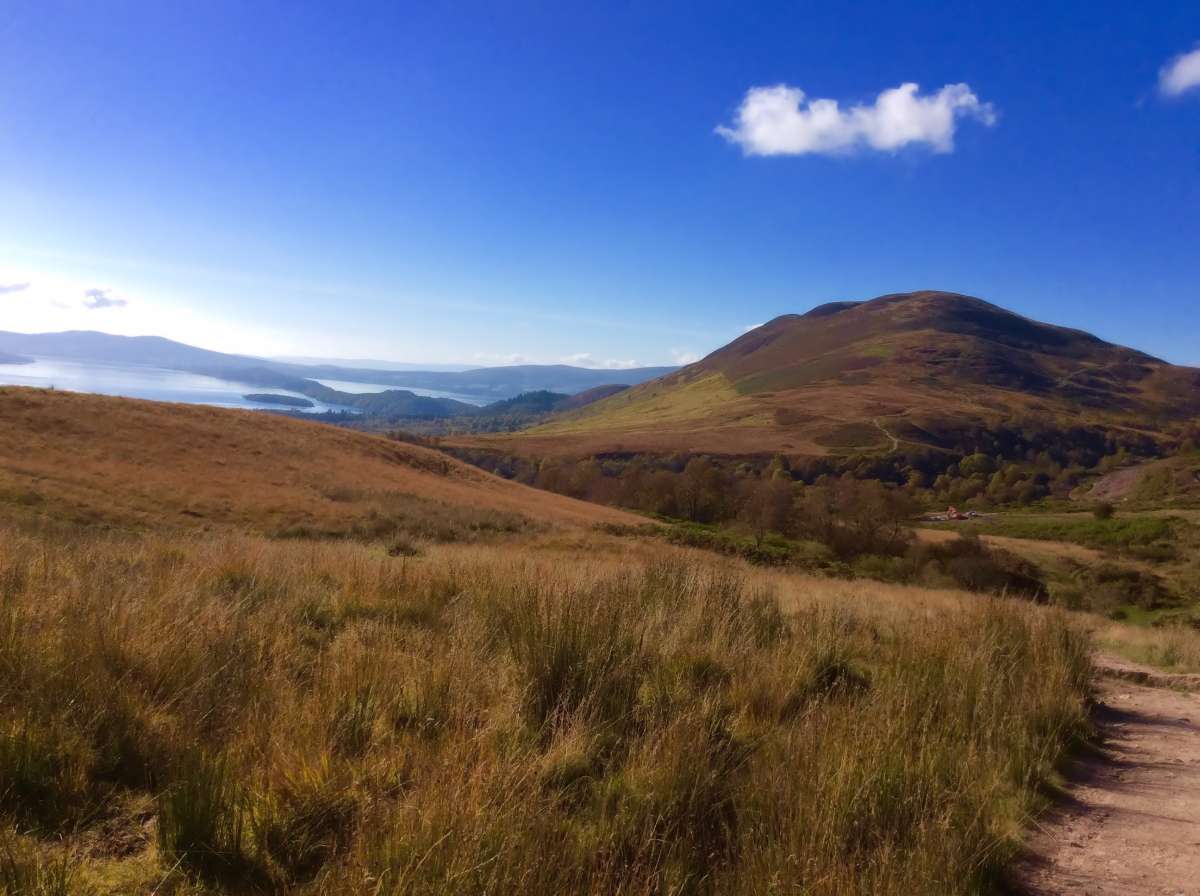 The next day we returned to Balmaha where we hired a rowing boat and made the short voyage to the “enchanted” island of Inchcailloch.

That’s the description on the official website. And, while the tourist board may well have been playing fast and loose with the dictionary, there was something a little bewitching about this 50 hectare entanglement of trees and earth.

The island receives around 20,000 visitors a year, but when we arrived it was eerily quiet.

We walked along a rickety jetty and proceeded down the narrow woodland path which took us deeper into the arms of the forest until we reached our first point of interest – an ancient burial ground belonging to the legendary McGregor clan, kin of the beloved Scottish folk hero Rob Roy. 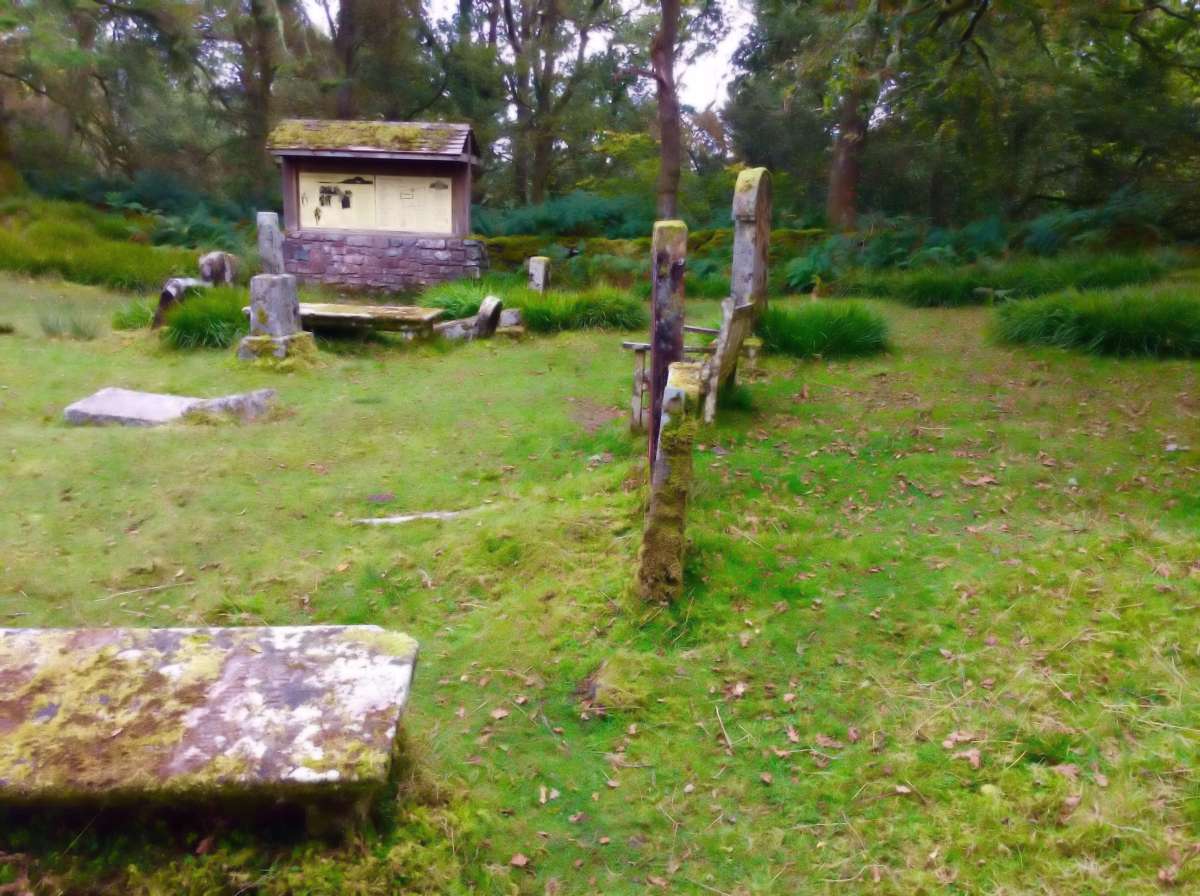 The information board at the gate also revealed the origin of the island’s Gaelic name ‘Inchailloch’, which translates to “Isle of the old woman”. The old woman in question was Saint Kentigerna, who was in part responsible for the spread of Christianity throughout Scotland.

Suddenly, out of nowhere, a creature shot past me at breakneck speed. I reeled back in shock, caught a fleeting glimpse of the beast and was relieved it was just a deer.

Roe deer have been roaming Incahilloch since the time of Robert the Bruce when the island was used for hunting. But they’re not the most curious residents on the Loch, not by a long stretch.

Neighbouring Inchconnachan is actually home to a colony of wallabies. A quirk of history, the colony was introduced by local aristocrat Lady Colquhoun in the 1940’s and has since grown to become one of the few populations of wallabies outside Australia.

While there were no antipodean anomalies to be seen bounding around Incahilloch our mini excursion was proving worthwhile. We had soaked up a little history, got acquainted with the local wildlife and there was still time to head to the shore and enjoy the sunset before returning to the boat. 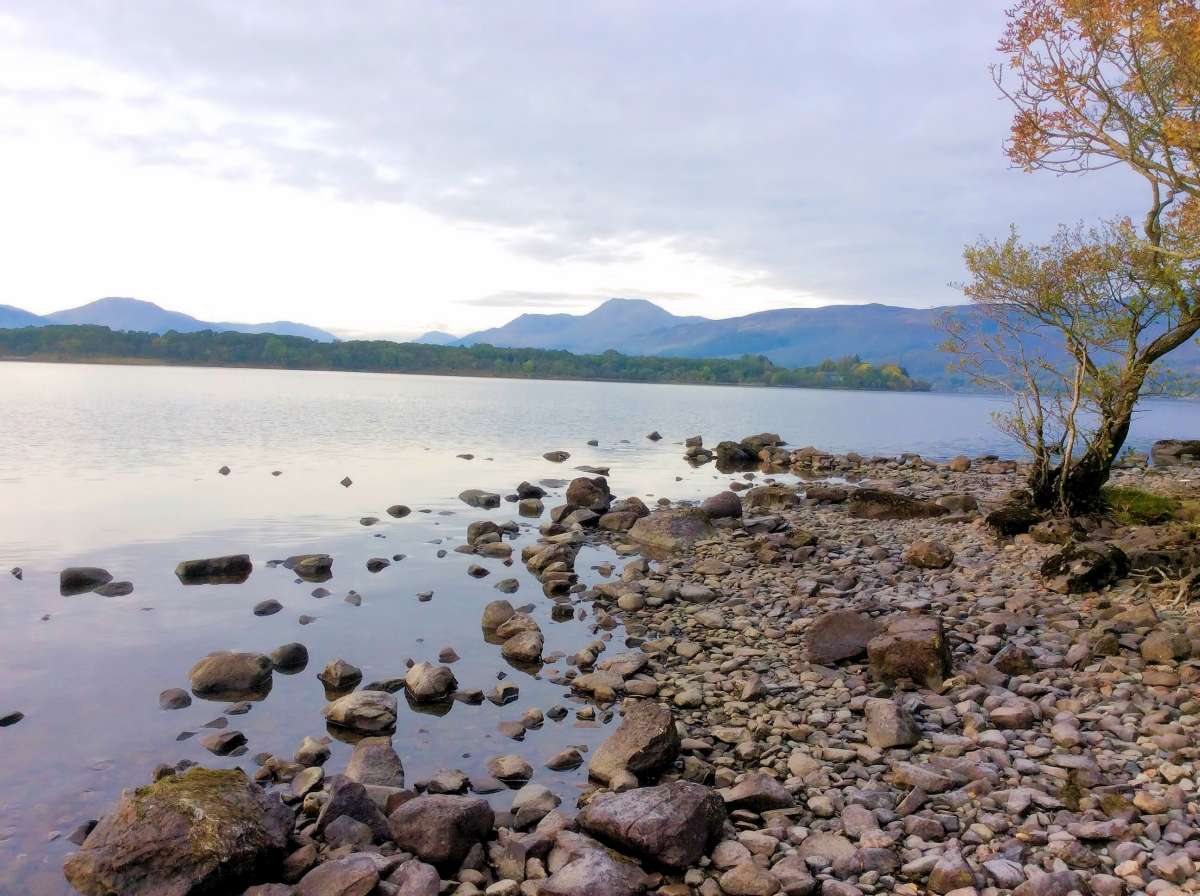 Tranquil views from the shore at Inchcailloch © Aneta Domagala

Several locals had informed us that the village of Luss, situated on the western banks of the Loch, was the loveliest in all of Scotland.

Unable to resist the opportunity to visit a place described in such glowing terms we ploughed through a full breakfast, hired a couple of bicycles and embarked on the 15km or so ride that would take us there.

On the way we stopped off at the tiny hamlet of Aldochay situated on the very edge of the Loch and opposite one of its larger islands Inchtavannach.

Covered in a rich carpet of oak trees, Inchtavannach boasts twin summits rising in excess of 200 ft and a large solitary house visible through a clearing in the forest.

The poets Samuel Taylor Coleridge and William Wordsworth visited in 1803 and I’m sure it provided them with plenty of romantic inspiration. Still, as impressive as it was, I was drawn to the far smaller islet that couldn’t have been more than 25 metres from the shore.

The man-made Islet, or ‘Crannog’, had been created by Iron Age dwellers as a safe haven from predators.

My thoughts turned away from the Iron Age as I studied the cottage next door. One of only three residences in the area, it was filled with around 50 garden gnomes and all manner of cutesy sculptures from miniature bunny rabbits through to a family of ornamental ducks.

And then I realised what it is that makes this part of Scotland so likeable. A cottage daubed in eye-watering chintz can stand just feet away from a site of ancient historical significance and not even look the tiniest bit out of place.

The strength of the region’s heritage became even more apparent as we arrived in Luss, a village so quintessentially Scottish that it has its own kilt-maker and bagpipe works.

The village is composed, almost entirely, of charming, near identical, 18th and 19th century cottages, that were once home to the workers at the nearby slate quarry and built by one of the few philanthropic companies that actually cared for the welfare of their staff. 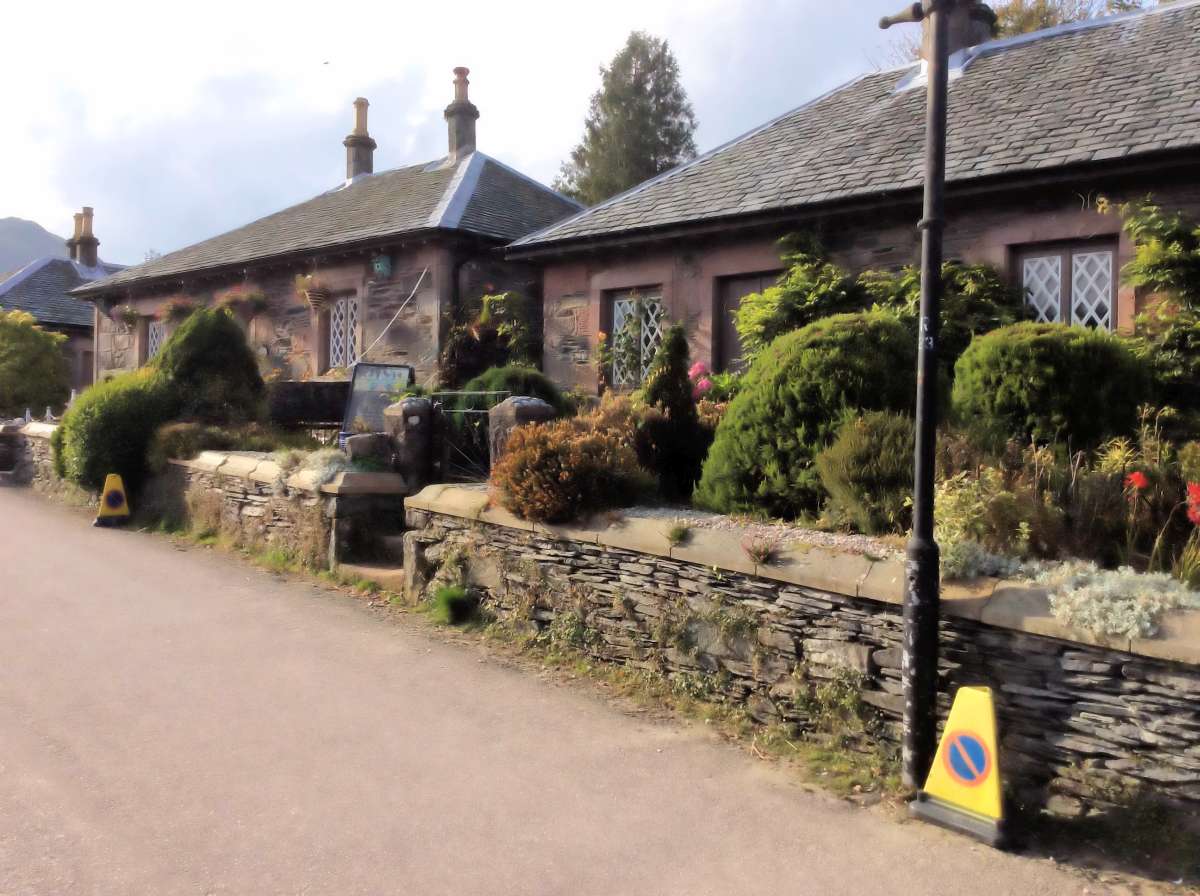 Identical cottages in the village of Luss © Aneta Domagala

The cottages now operate as convenience stores, coffee shops and homes for the locals, but they look almost exactly as they did 150 years ago. The care taken when they were first built has clearly continued to the day.

Luss is exceptionally easy on the eye with Ben Lomond, the most southerly Munro (a mountain with a height over 3000 feet), dominating the view north over the Loch and the Luss Hills rising to the west.

And that, apart from a small souvenir shop selling shortbread and whisky, pretty much sums it up. There’s no fanfare and not even a hint of tackiness – just a solitary signpost declaring Luss as ‘Scotland’s loveliest village’.

Clearly, there’s no need to make a song and dance about things in this part of the world.

Luss, like the whole Loch Lomond region, is special because so much of what makes it remarkable has been carefully preserved. And why would you want to change it? It’s more than lovely enough just as it is.

2015 Travel Photographer of the Year