Top 10 things to see and do in New York City

New York is the city that never sleeps. Here's what you must check out. 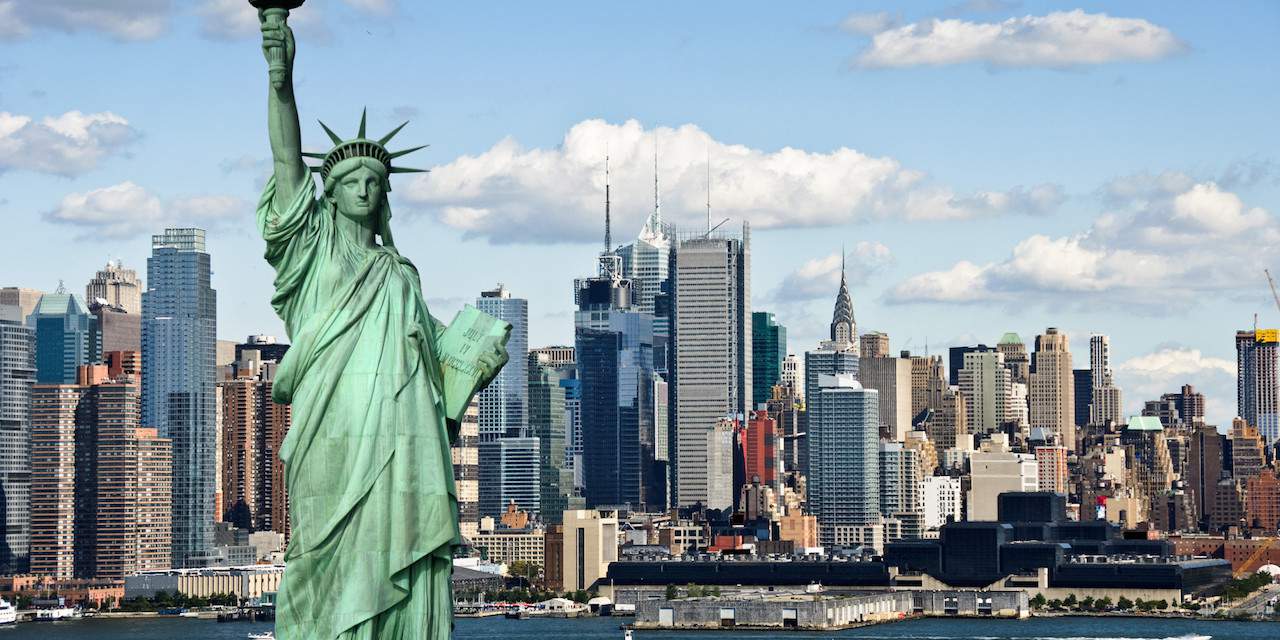 The ‘city that never sleeps is one of the world’s most exciting, most colourful and most intoxicating destinations. New York is a shopper’s paradise and there are bargains to be had.

What never changes is the fact that the city is one of the world’s greatest entertainment and cultural capitals and crammed full of sights, museums and dazzling theatres. So whether it’s for gifts, sales bargains, a Broadway show, jazz in the ‘Village’, the sight of the Manhattan skyline, or simply for the city’s unique atmosphere, this is a city break to take before you die. 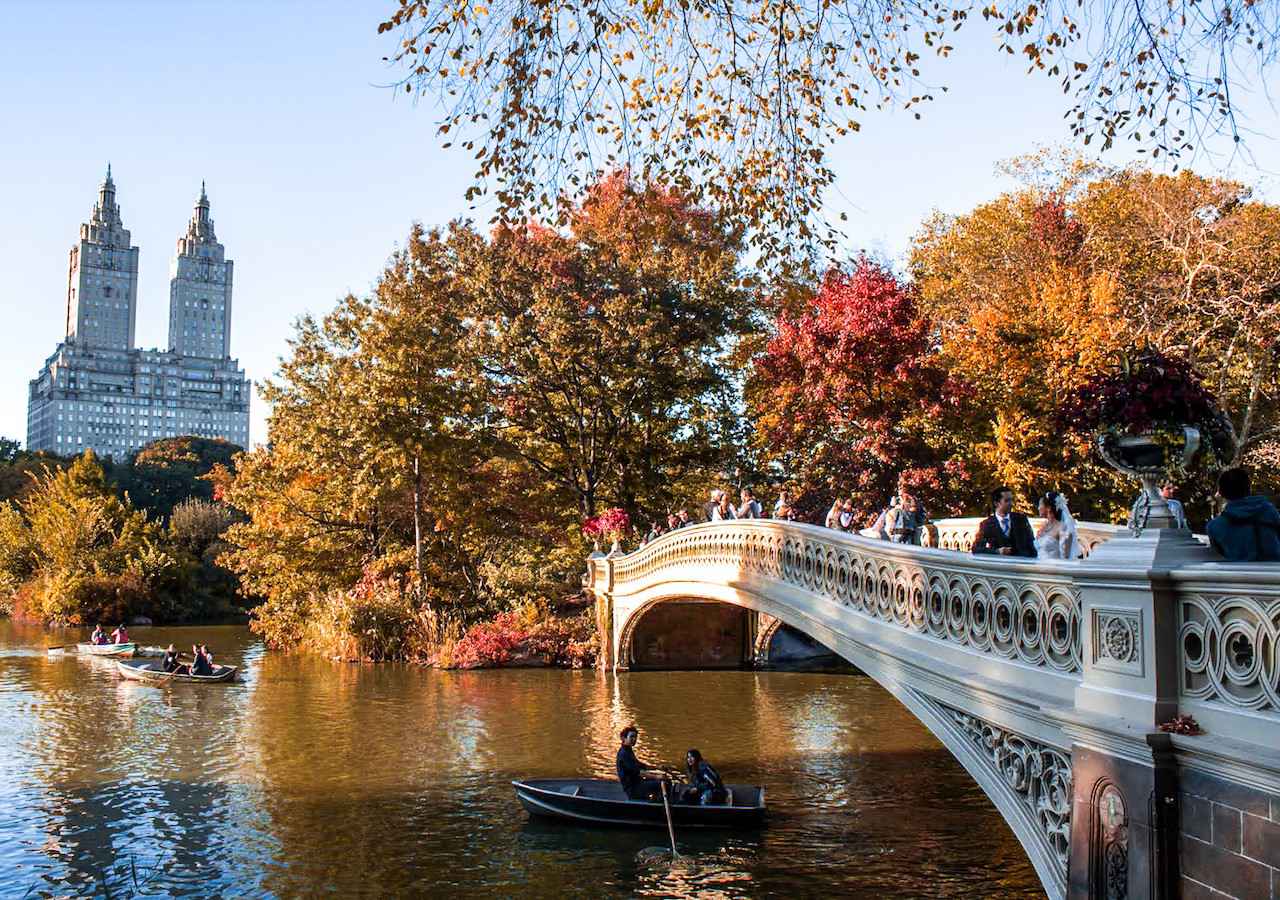 New York’s chill out zone, Central Park, was the first landscaped park in the United States and it’s located in the heart of New York. Manhattan locals escape to here from their skyscrapers and hectic lives to enjoy some time away from the madding crowd. The park has appeared in so many films and TV series, it even has its own celebrity status.

Central Park hosts the much anticipated annual Summerstage. This is a series of free concerts held throughout the summer months at the Rumsey Playfield in the centre of the park. In all, there are 1,100 free concerts scheduled to take place, not just in Central Park but also city-wide in public spaces throughout New York. Show stoppers include Cassandra Wilson, Joss Stone, Arrested Development and Rufus Wainwright.

Don’t forget to visit the Strawberry Fields three-acre landscaped area of Central Park that has been dedicated to the memory of John Lennon who used to live across the street in the Dakota building. His wife, Yoko Ono, still lives there. 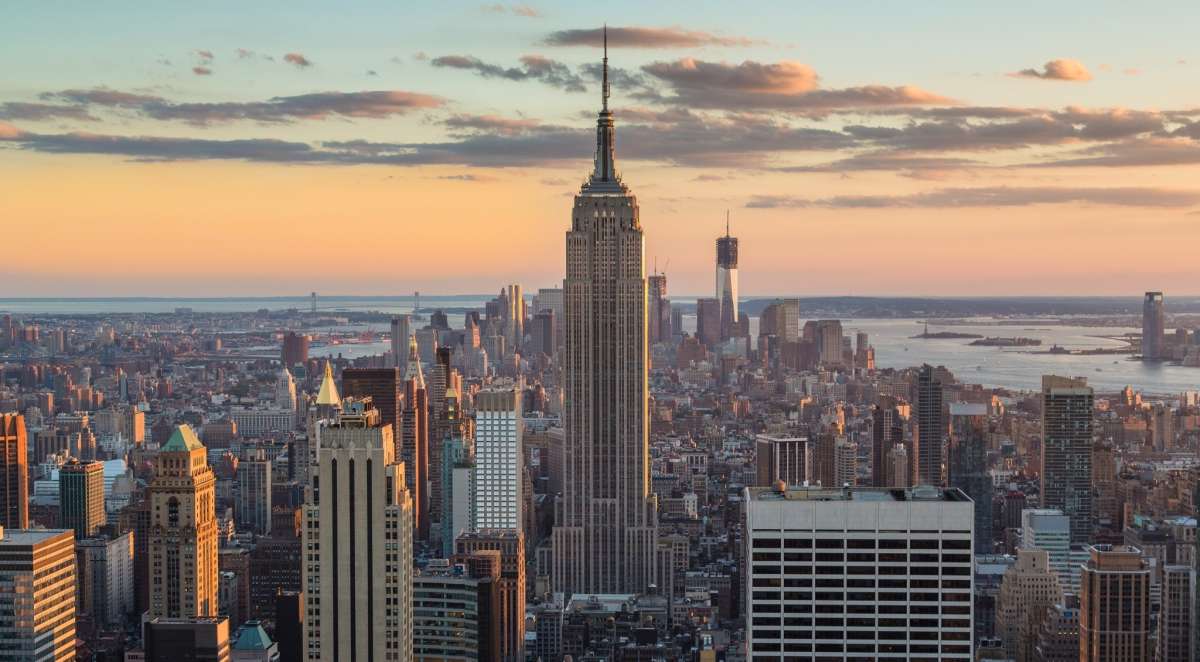 First timers to New York should go directly to the lime-stone art-deco dazzler – the Empire State Building. The shimmering gold lobby is enough to make the trip worthwhile but it is the views of Manhattan that you are after.

The vista from the observatory on the 86th and 102nd floors is superb. Be sure to download the free app Empire State Building Observatory Experience App from the Apple Store or Google Play.

The queues can be tiresome but getting there really early or very late helps. Or to avoid them altogether, buy your tickets online.

For a magical moment, get there in time for sunset and watch the play of light as the sun sets over the city. Incidentally the Empire State Building soars 1,454 feet above Midtown Manhattan 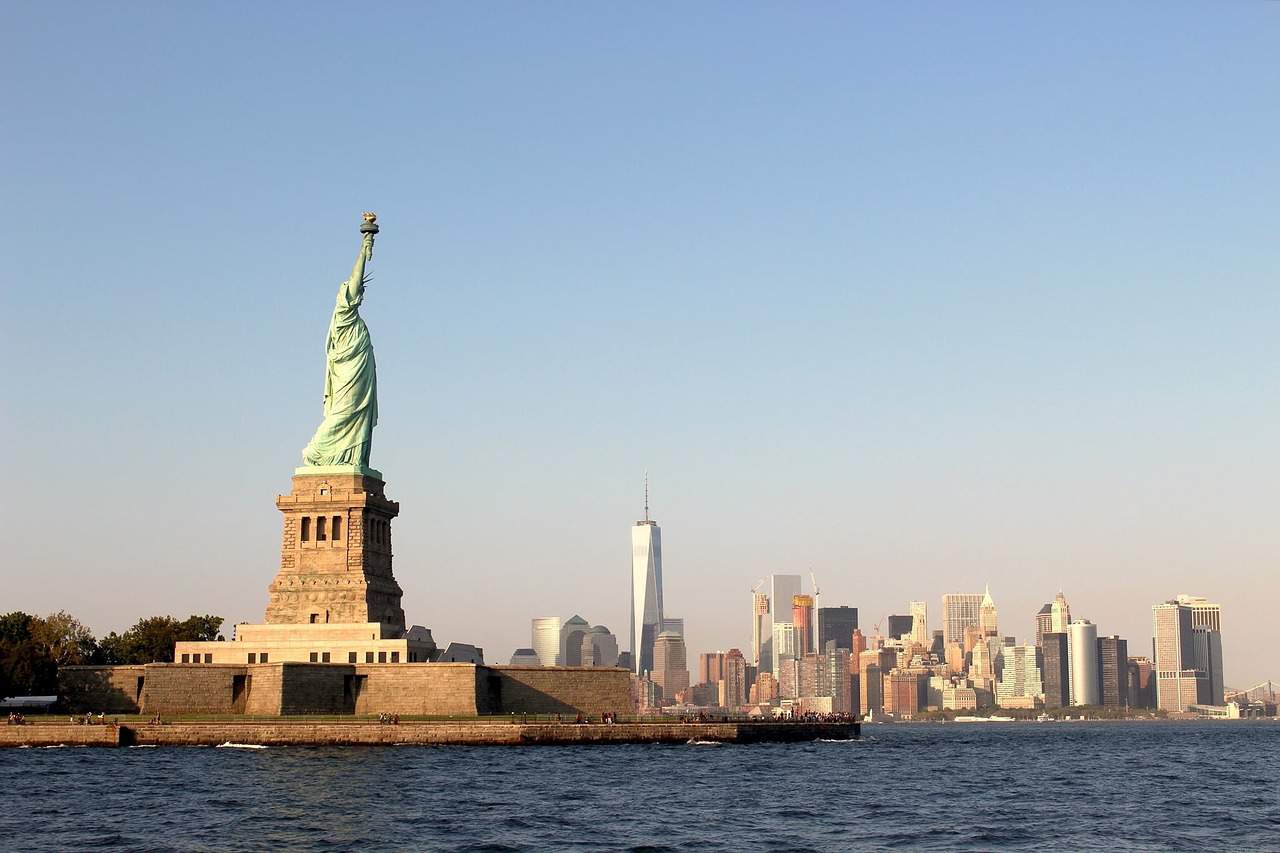 This imposing statue of a woman wearing a stola, a radiant crown and sandals trampling a broken chain whilst carrying a torch in her raised hand, was designed by sculptor Frederic-August Bartholdi Standing tall in the middle of Liberty Island.

It is known as the “Liberty Enlightening the World’ and was a gift from France to celebrate the American Centennial in 1885. It was unveiled on October 28th 1886 and is the ultimate symbol of the American Dream. It is whispered that the stern face of the statue was modelled on Bartholdi’s mother due to the uncanny resemblance, though this has never been confirmed or denied by the sculpture.

At 305 feet (93 meters) tall it remains America’s finest visual and spiritual landmarks and the first thing you see when you sail into New York’s harbour.

You can enter the pedestal and the monument’s crown but buy your tickets well in advance. The Statue of Liberty exhibit is located on the second floor of the pedestal of the statue and offers a complete history of her symbolism and you can see a full size replica of her face and feet.

Admission: Free. Ferry ticket to Statue of Libery and Ellis Island costs from $24 for adults and $16 for kids. 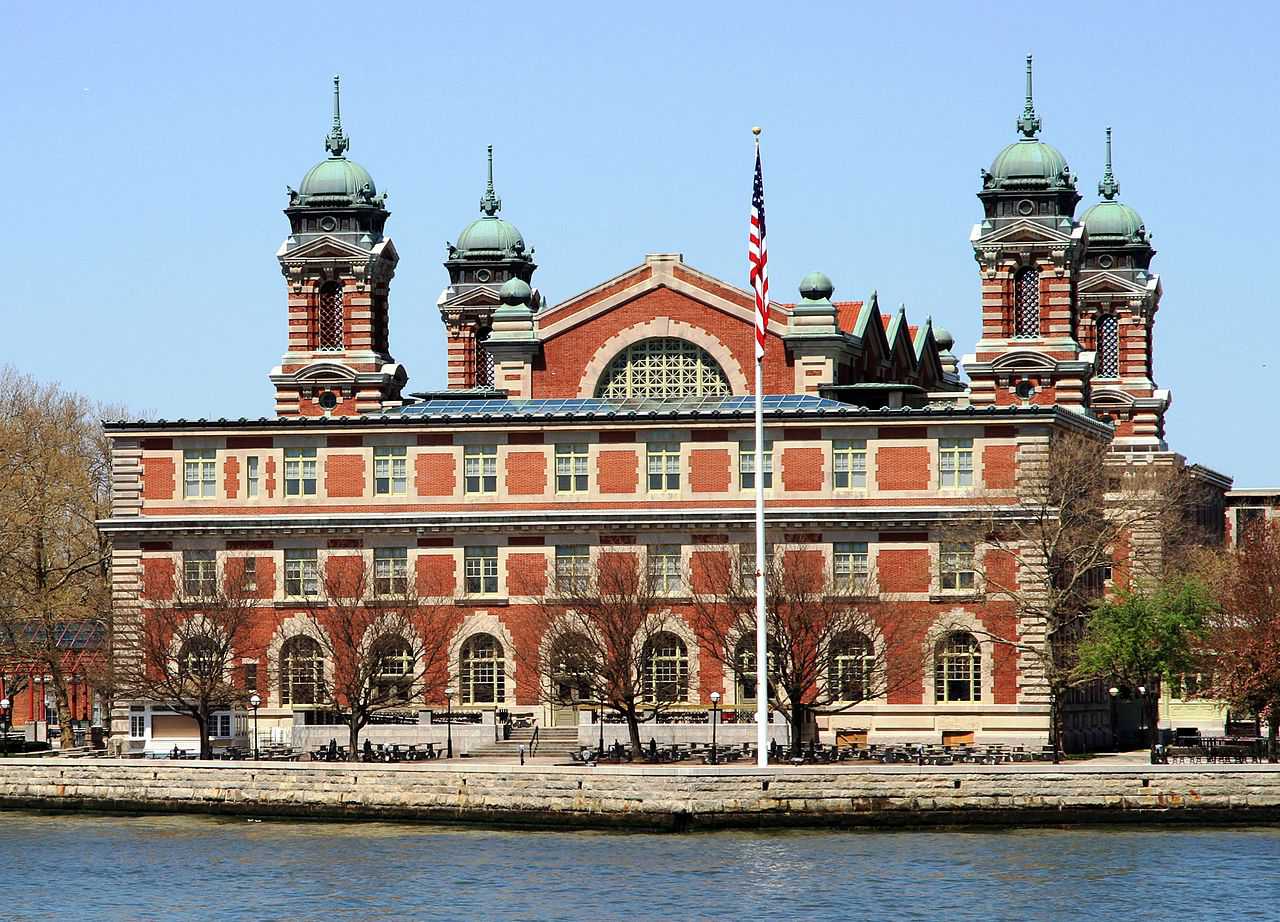 (c) Ingfbruno; cropped by Beyond My Ken

Ellis Island, reached via ferry from New York, was the gateway for over 12 million immigrants from 1892 to 1954. All were in search of freedom of speech, freedom of religion and prosperity.

Since 1990 it has reopened to the public as a museum and is one of New York’s most moving attractions. The museum depicts the story of immigrants to America through their eyes, has a wall that commemorates more than 500,000 immigrants and their families. There are also interactive exhibits and if you are trying to trace your ancestors this could be a good place to start.

Admission: Free. Ferry ticket to Statue of Libery and Ellis Island costs $24 for adults and $16 for kids. 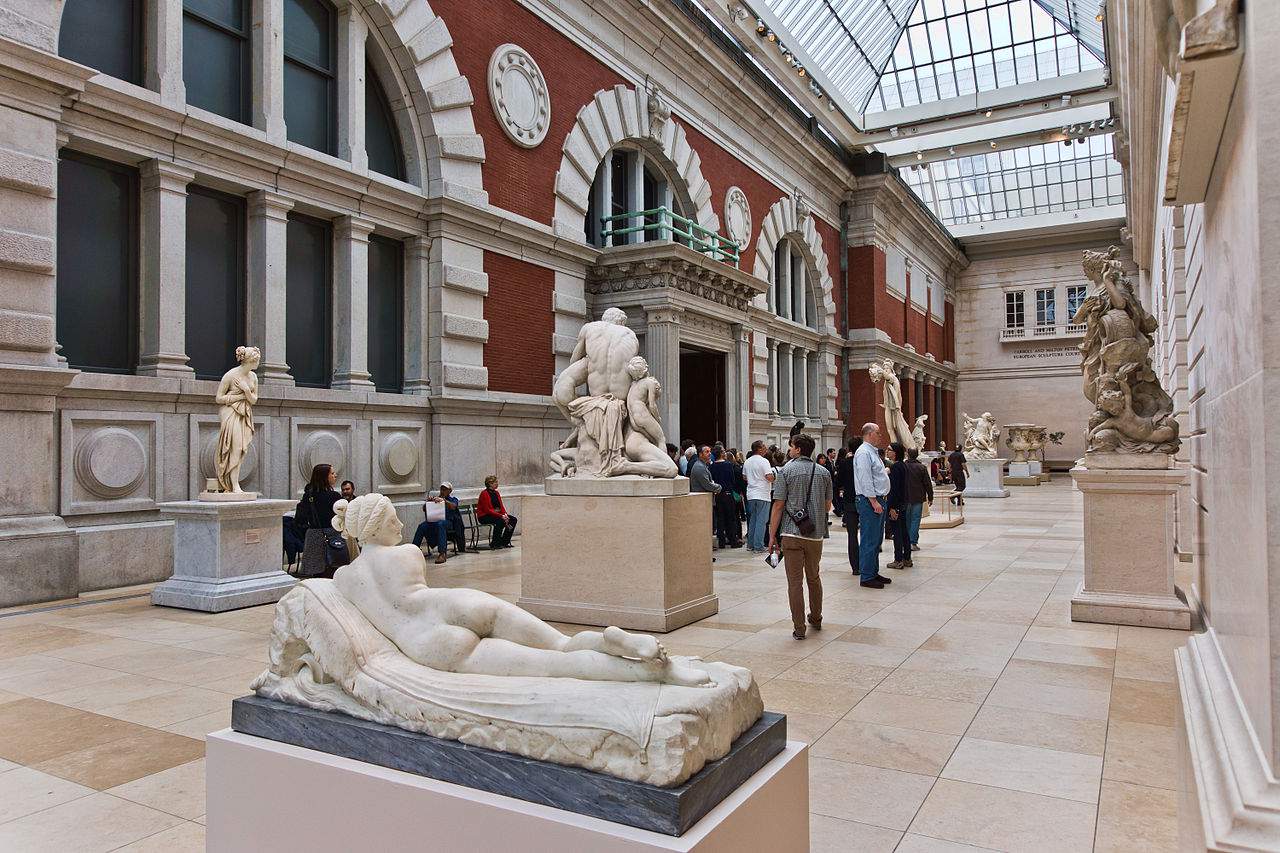 The Metropolitan Museum of Art, located on the eastern edge of Central Park along the Museum Mile, was created by a group of New York bankers and financiers who felt that their home town needed an encyclopaedic museum of world art.

Known generally as The Met, this amazing museum delivers. Access is from the sidewalk on Fifth Avenue where palatial steps Doric columns and tall windows greet you. Inside, immense stairways and water fountains add glamour and grandeur and a sense of awe. Even if you ‘don’t do museums’, this one will still be a winner.

This huge museum offers every category of art in every known medium from every part of the world. In all, there are a staggering 2 million works of art so there’s bound to be a section you’ll love. Perhaps The Temple of Dendur and Egyptian Art wing, The Equestrian Court in the Arms and Armory section, the collection of Cypriot Art, the Picassos, the Greek and Roman sculptures or the rooftop garden with its modern art installation.

Our tip: Allow at least a few hours, get a map and plan your route carefully otherwise you’ll probably get lost, and wear comfy shoes. Don’t leave without visiting the rooftop because from here you’ll get a staggering view over New York city.

History of art in New York (and where to see it) 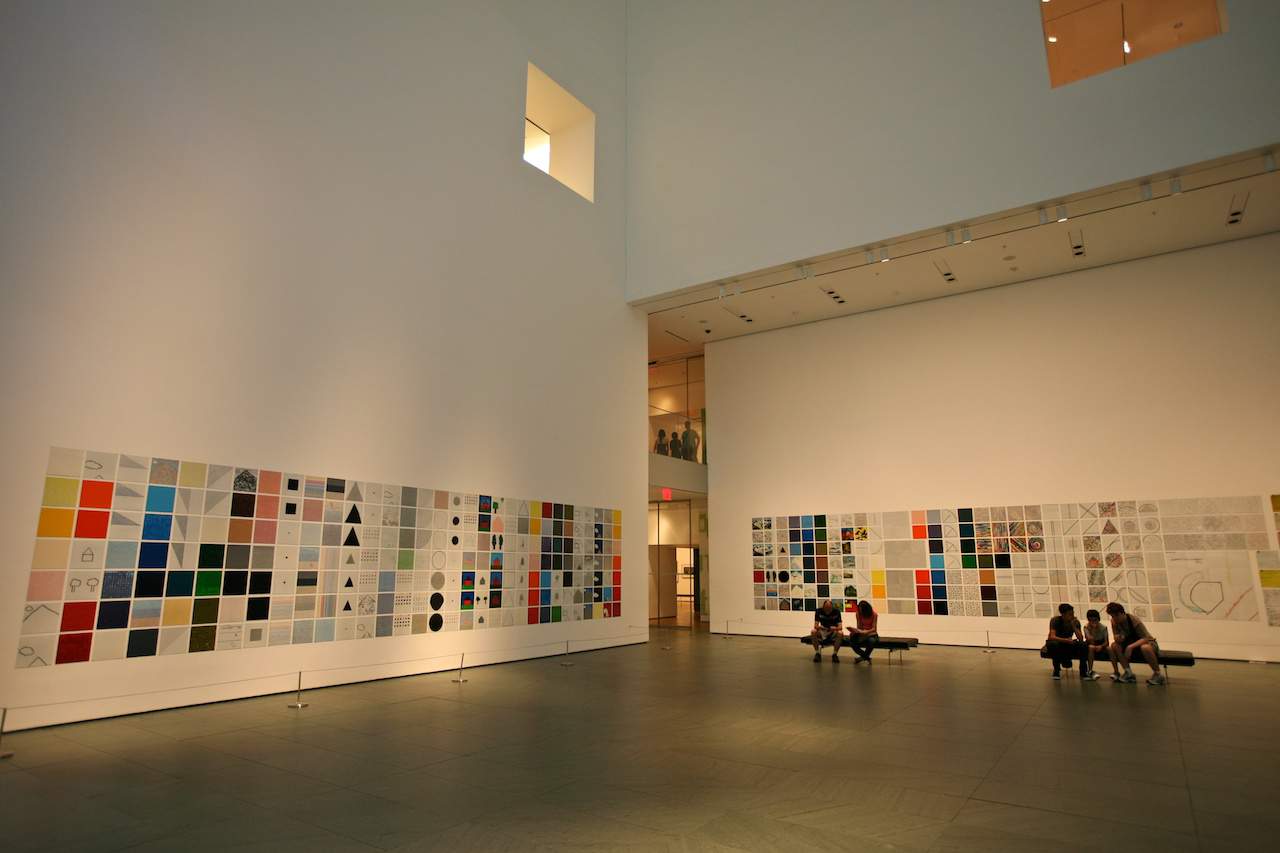 This amazing museum, located in midtown Manhattan, is New York’s most prestigious and has the largest collection of artwork created between 1880 to date. To give you some perspective, MoMA‘s library and archives hold over 300,000 books, artist books, and periodicals, as well as individual files on more than 70,000 artists, so allow at least a couple of hours for your visit. If you get hungry while you are there, dine at its award-winning restaurant called The Modern. 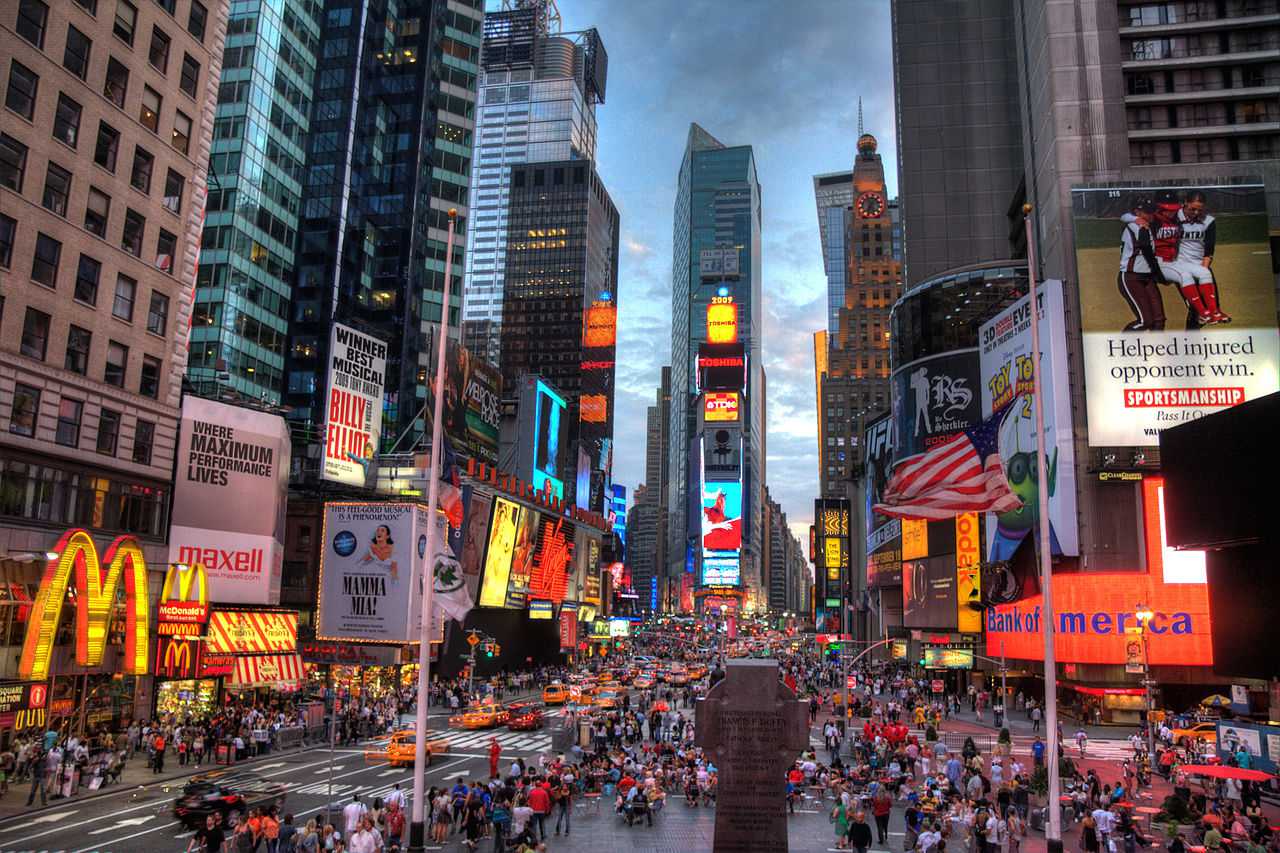 Times Square, located in New York City’s vibrant borough of Manhattan, is the central hub for nightlife, restaurants and entertainment for New Yorkers. If it looks familiar when you get there it’s because it is featured in hundreds of TV productions. In particular, the Robert De Niro and Jodi Foster film Taxi Driver was shot here.

It stretches from West 42nd to West 47th streets and has the accolade of being one of the world’s most iconic landmarks. At night, the square simply dazzles with the bright lights, animated advertisements and large TV screens showing newsreels. Depending on your perspective, it’s either a neon nightmare or the place to be.

Broadway, the city’s theatre district is located just off Times Square and is home to over 50 theatres, more than 30 hotels, cinemas, shops, restaurants and bars. Everyone should catch a show before their leave New York. Most musicals do afternoon performances on Wednesday, Saturdays and Sundays so you could squeeze in a matinee in between shopping and dinner. 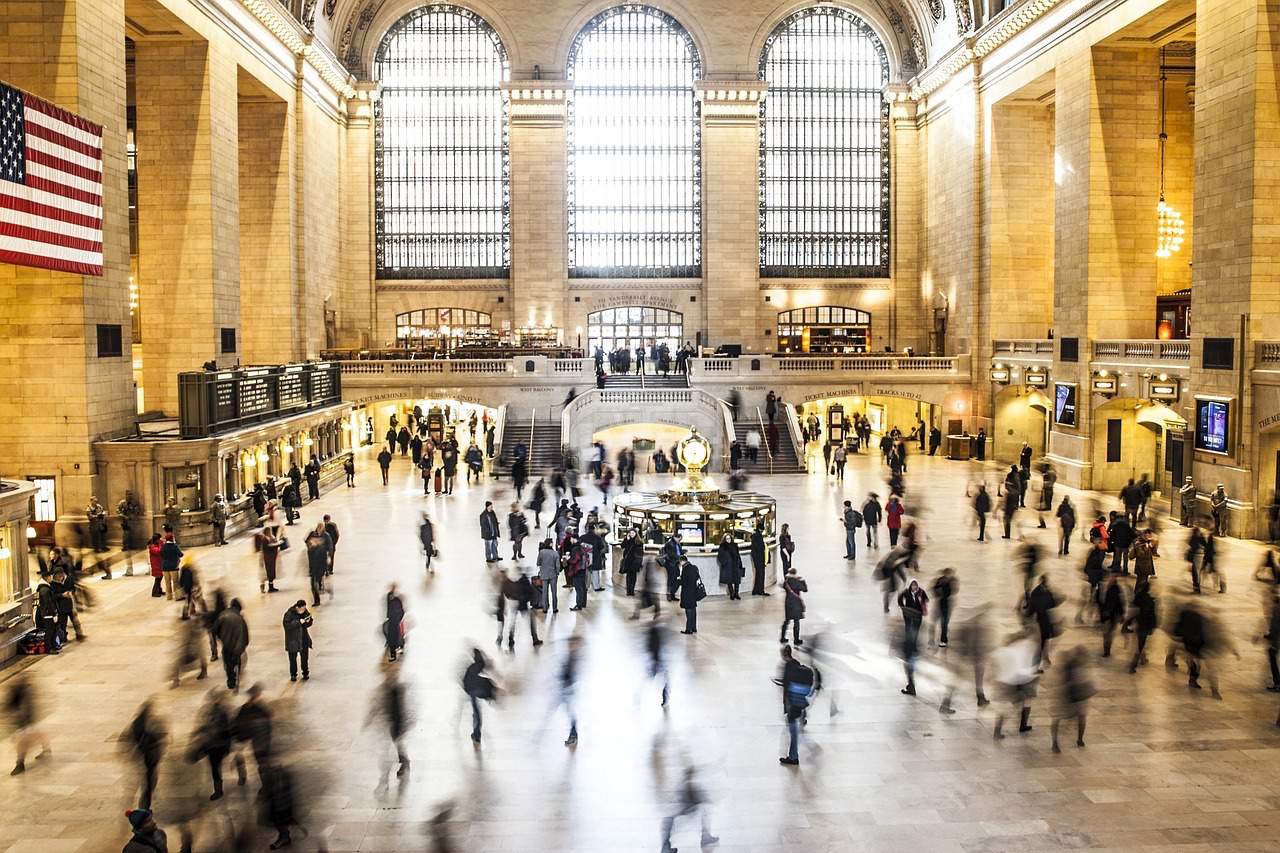 Manhattan’s Grand Central Station is famed worldwide as the bustling hub of transportation. Constructed in 1903-1913 it is a grand Beaux-Arts building serving as a transportation hub connecting train, metro, car and pedestrian traffic. Every day a staggering 5000,000 travellers pass through the monumental Grand Central railway station every day, yet few people know about the Whispering Gallery.

Find it just outside the Oyster Bar restaurant in the lower concourse in a domed area where people generally congregate. As elsewhere in New York, the noise is constant but amazingly if you stand facing a pillar and whisper, someone standing facing a pillar diagonally opposite to you will hear it. Try it with a friend – it is actually more discrete than using your mobile. 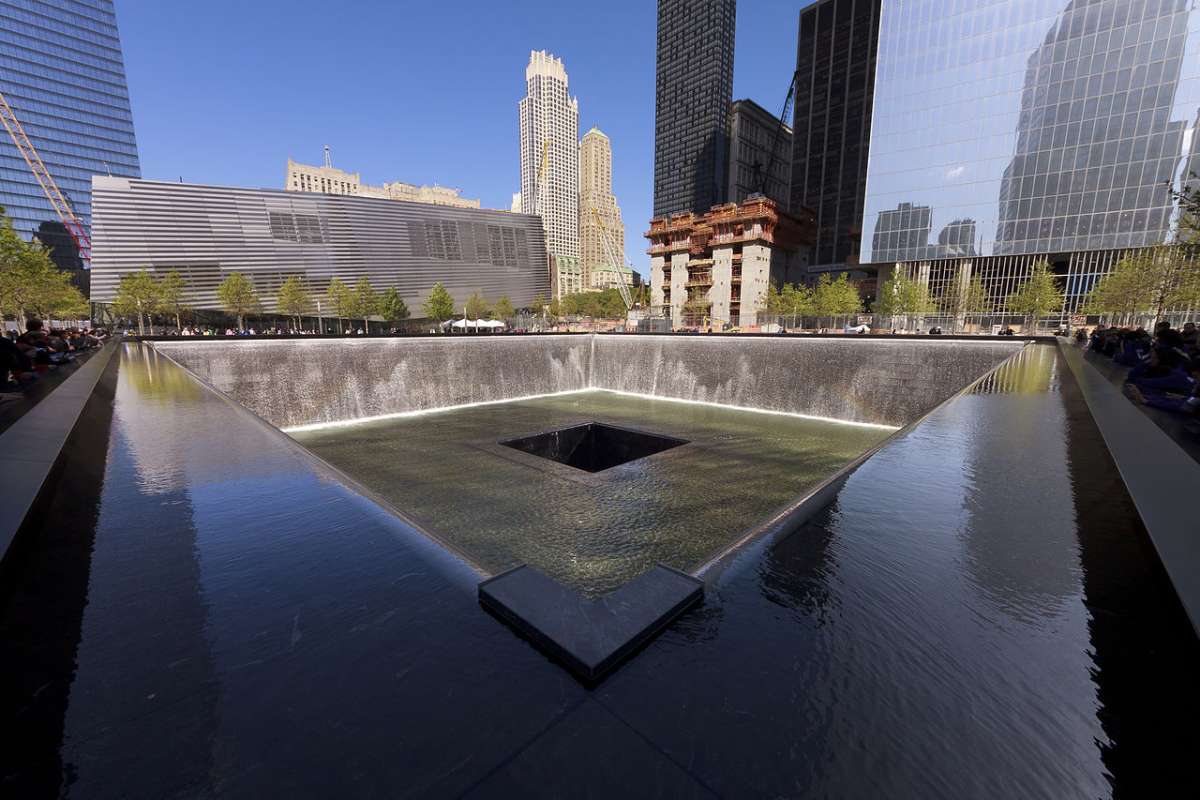 The skyline on Lower Manhattan used to have the twin towers of World Trade Center but their destruction in the September 11 2001 terrorist attack left a gaping hole both in the landscape and in the city’s soul. Today, this area (bordered by Vesey Street to the north, the West Side Highway to the west, Liberty Street to the south and Church street to the east) is referred to as Ground Zero and there is a Wall of Heroes that lists the names of those who died that day. There are also photos of how the World Trade Center was initially constructed in the 60s and finally opened in 1972.

After much debate, the Lower Manhattan Development Corporation set up a competition for ideas of how to use the land. A design for a tower, to be called 1 World Trade Center and nicknamed Freedom Tower, submitted by Daniel Libeskind was finally selected. The new design was unveiled on June 28 2006 and the building will most likely be ready for occupancy sometime in 2013. When completed, 1 World Trade Centre will be 1,368 feet (417 m) and be the tallest building in the United States and the tallest all-office building in the world.

Next to the new tower is the Ground Zero memorial. A very peaceful place with a waterfall and the names of all the people who lost their lives that day inscribed around the edge. To visit the memorial, book a visitor pass for free online or on the day.

The Rockefeller Center, built by the Rockefeller family, is a huge but attractive complex of 14 commercial lime stone buildings around a central fountain that overlooks its world famous ice rink.

The complex stretches from 48th Street to 51st street and Fifth Avenue and the Avenue of the Americas (Sixth Avenue). It houses the largest indoor theatre – Radio City Music Hall – so named after the complex’s first tenants – the Radio Corporation of America. Beneath is a complete shopping extravaganza with cafes and restaurants.

TOP TIP TO SEE THE HARBOUR: The Staten Island Ferry offer a free 25-minute ride around the harbour. You’ll pass by (without stopping) at the Statue of Liberty and Ellis Island.

TOP TIP FOR SHOPPERS: Who wouldn’t put shopping on their To-Do list in New York. Sales start December 26 and last till the end of February. Expect 30-60 per cent at high street stores and up to 80 per cent in warehouses.

Look out for Barneys Warehouse, 255 West 17th Street, for savings of up to 80 per cent on labels such as Prada and Chole. Scoop, 532 Broadway, stocks the coolest brands, Earnest Sewn jeans and Sigerson Morrison shoes are much cheaper than in the UK. Non-designer wear sales are really good at Saks and Bloomingdales. Macy’s can be chaotic.

TOP TIP FOR DIE-HARD SIGHT-SEE-ERS: Buy a New York CityPass for $116, which gives you entrance to all the major museums plus a range of tourist attractions, including the Empire State Building and a cruise around the Statue of Liberty.