Home WorldEuropeMalta Top 10 things to see and do in Valletta, Malta
MaltaTop 10

Top 10 things to see and do in Valletta, Malta

A UNESCO World Heritage Site in Valletta you can dine on the finest natural harbours in the Med, and experience classic opera in one of the oldest theatres in Europe. 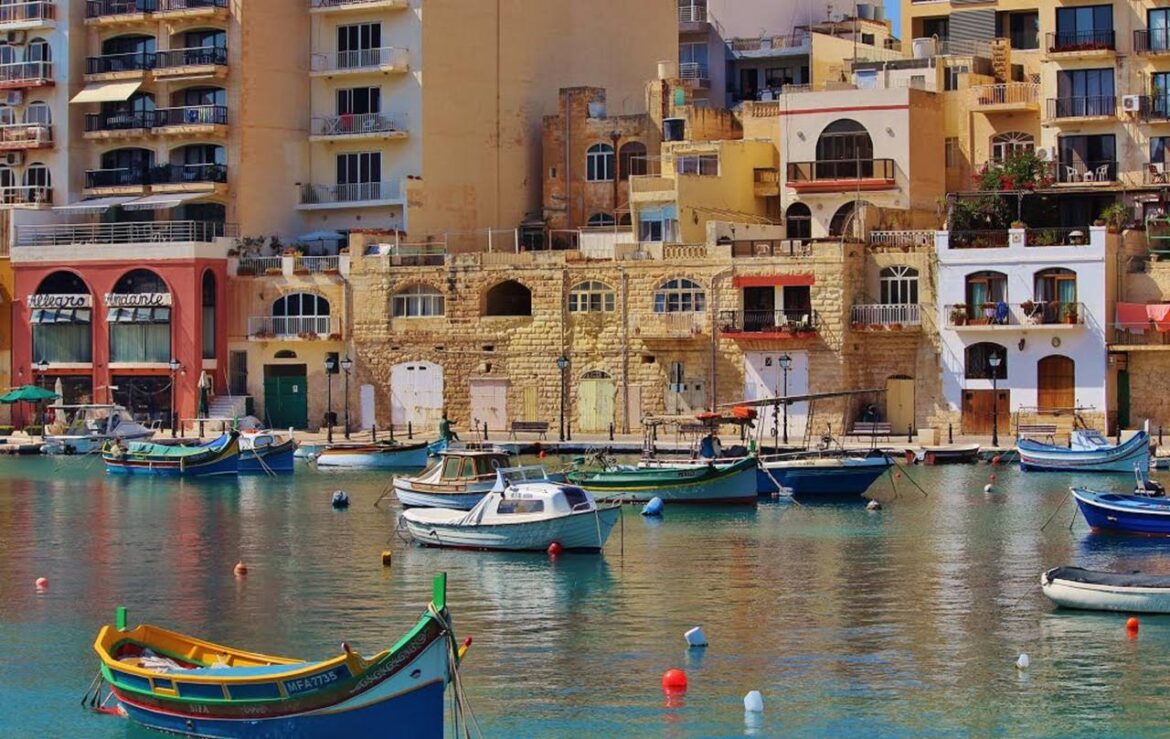 Whether you are an adventure traveller or a sightseer, an art-history enthusiast or a beachgoer, a backpacker or planning a weeklong high-end vacation, Valletta is a destination perfect for every kind of traveller—offering experiences as dynamic as its culture—for every occasion and passion.

Nightlife, Baroque architecture, Upper Barrakka Gardens; from the bustling streets of St John Street to a boat tour on the traditional dgħajsa (a Maltese gondola, to 16th-century palazzo, stays welcoming you for a stay unlike any, there are countless things to do, and much more places to be. Here are 10 of the best things you can see and do during your next trip to Valletta.

The Is-Suq Tal-Belt is a 19th-century Victorian-era marvel across the iconic Saint John’s Co-Cathedral where you can begin your journey to understanding the core of Valletta’s culture. Take a walk to explore the food market, shop for indigenous artefacts made by local artisans, and people watch. The Maltese name translates to ‘City Market’, which is precisely the experience this place offers, and then some with al fresco dining, exhibitions, live music, and more.

Take a tour of the St. John’s Co-Cathedral 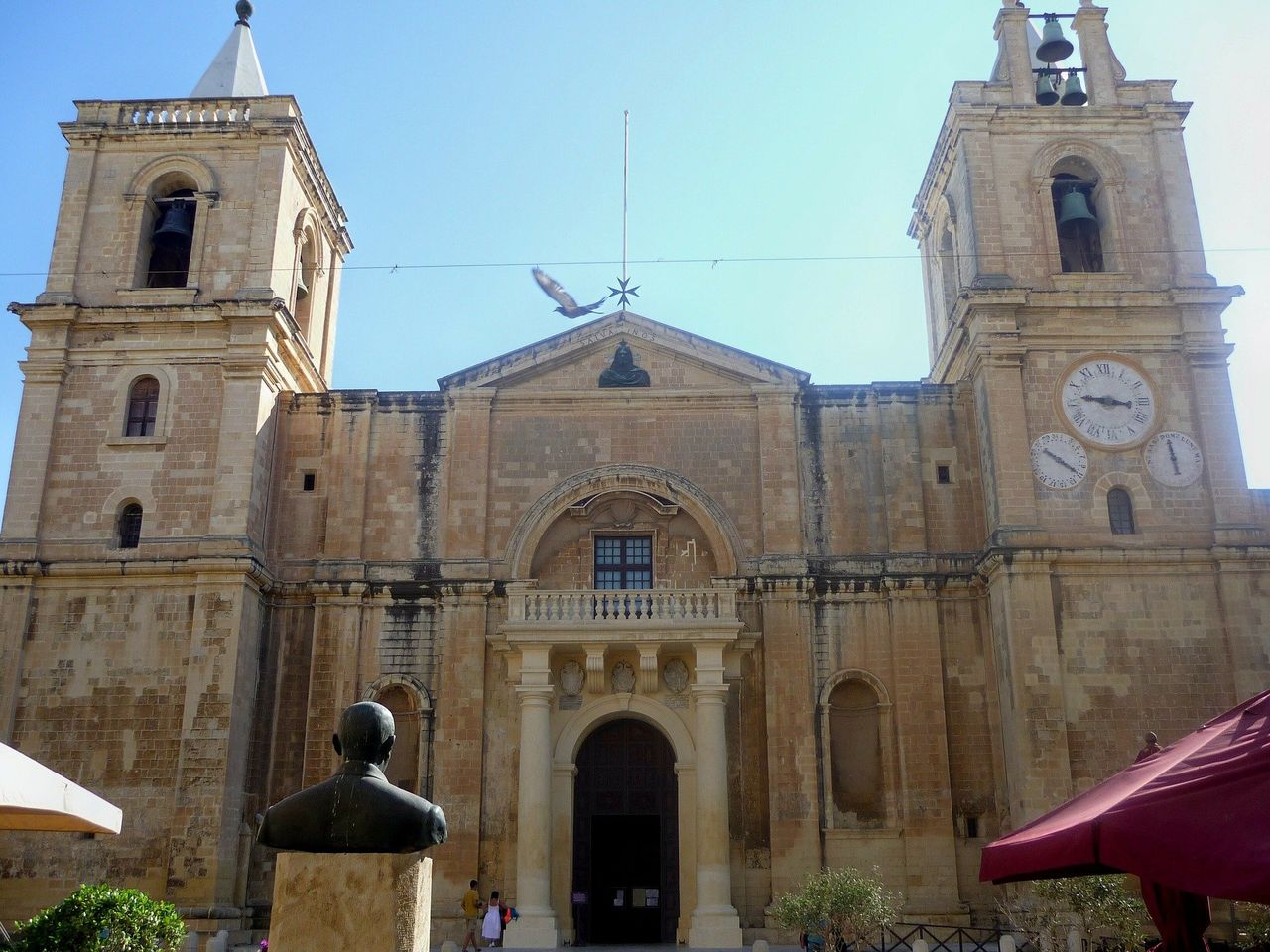 The Roman Catholic co-cathedral is one of the most noteworthy landmarks in Valletta that pays an ode to Saint John the Baptist. Built by the Knights of St John, the Baroque definition reflects the emergence of this theatrical version of Renaissance architecture in the 16th-century. Take a step back in time on a walking tour or catch a street show hosted in the courtyard, which also acts as a venue for a lively experience. Don’t forget to catch a glimpse of the only signed masterpiece by Caravaggio.

Brunch in a historic setting at the Harbour Club 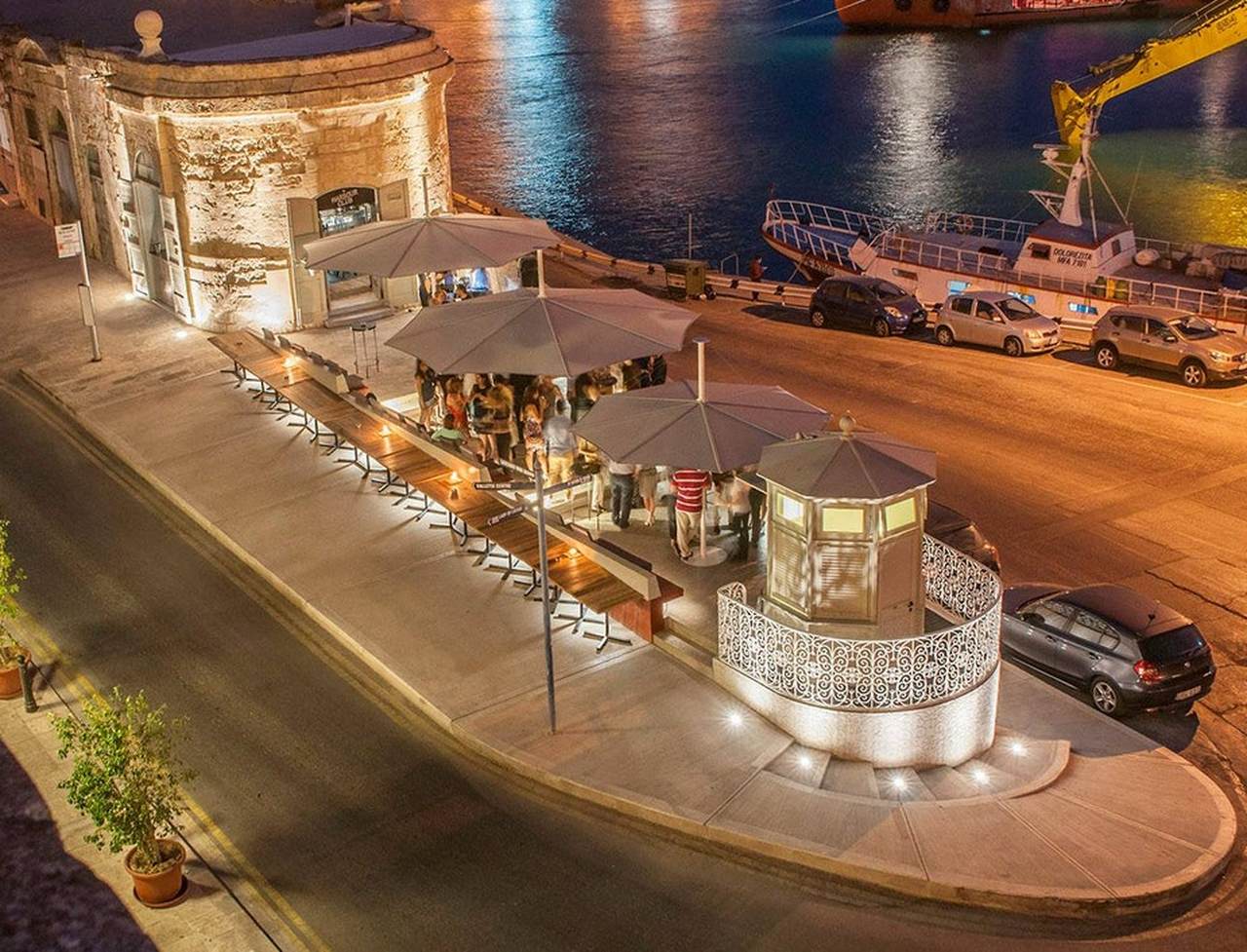 The royal and intimate setting of this former ice house built in 18C doesn’t only offer a fine-dining experience and panoramic views of the Grand Harbour, but the cuisines prepped with local produce from the island take centre stage at this sustainable-first establishment. The French influence in their Mediterranean cooking is undeniable and pairs well with their tailored wine menu for brunch on their sunlit terrace.

Step back in time with a Maltese gondola ride 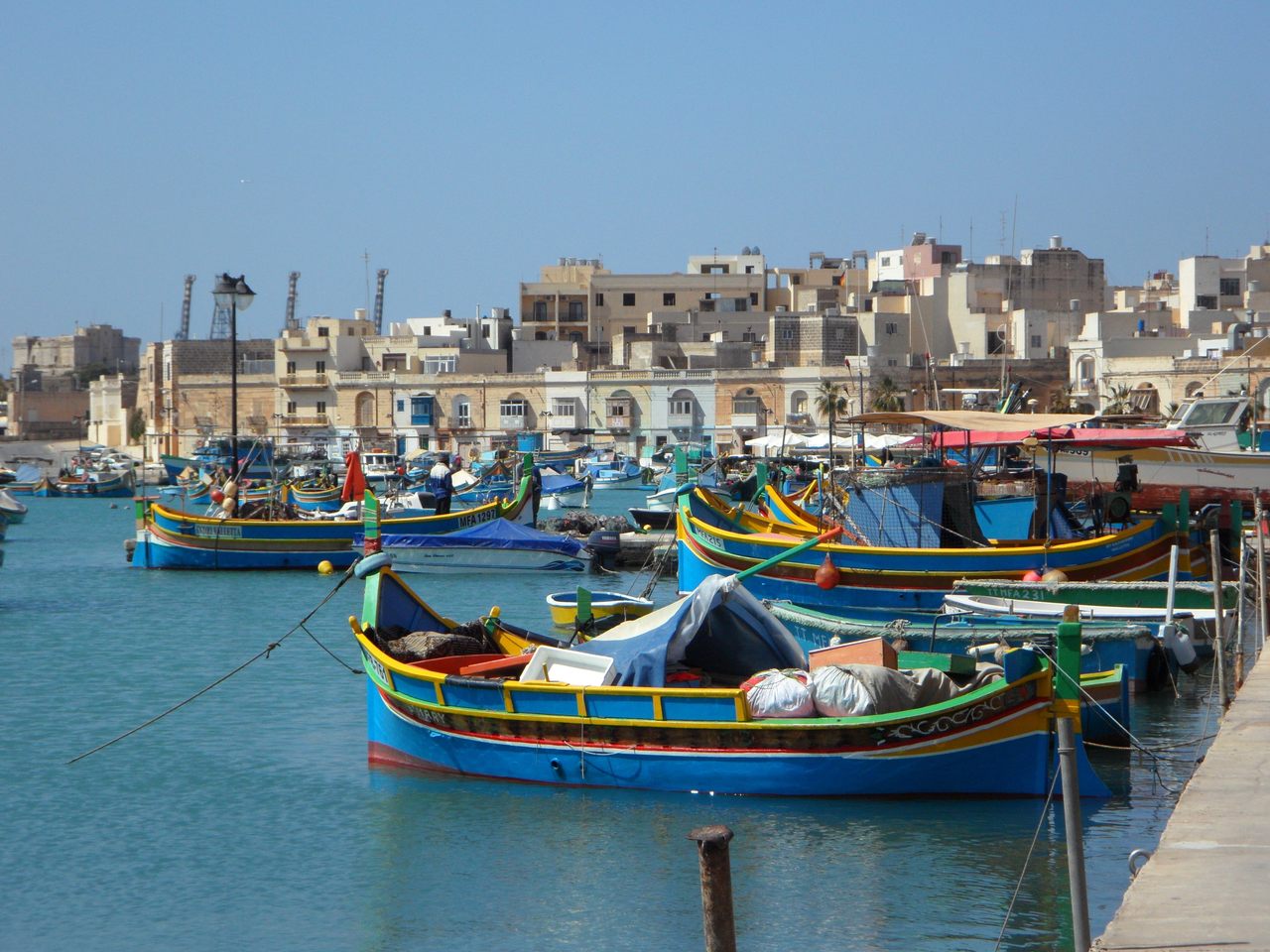 A throng of Maltese gondolas near the Harbour.

Synonymous with the Venetian gondola experience, a Dgħajsa ride across the Grand Harbour post-brunch might be the best way to relax and unwind for the afternoon. The vibrant rowboats take you from coast to coast and drop you off at The Three Cities—Vittoriosa, Senglea and Cospicua—a trio of fortified cities where timelessness has preserved history. Unlike Venice, the Dgħajsa rides are less like a touristic activity and more cultural, inexpensive, and often the least crowded place to be.

Wine and dine in Trabuxu 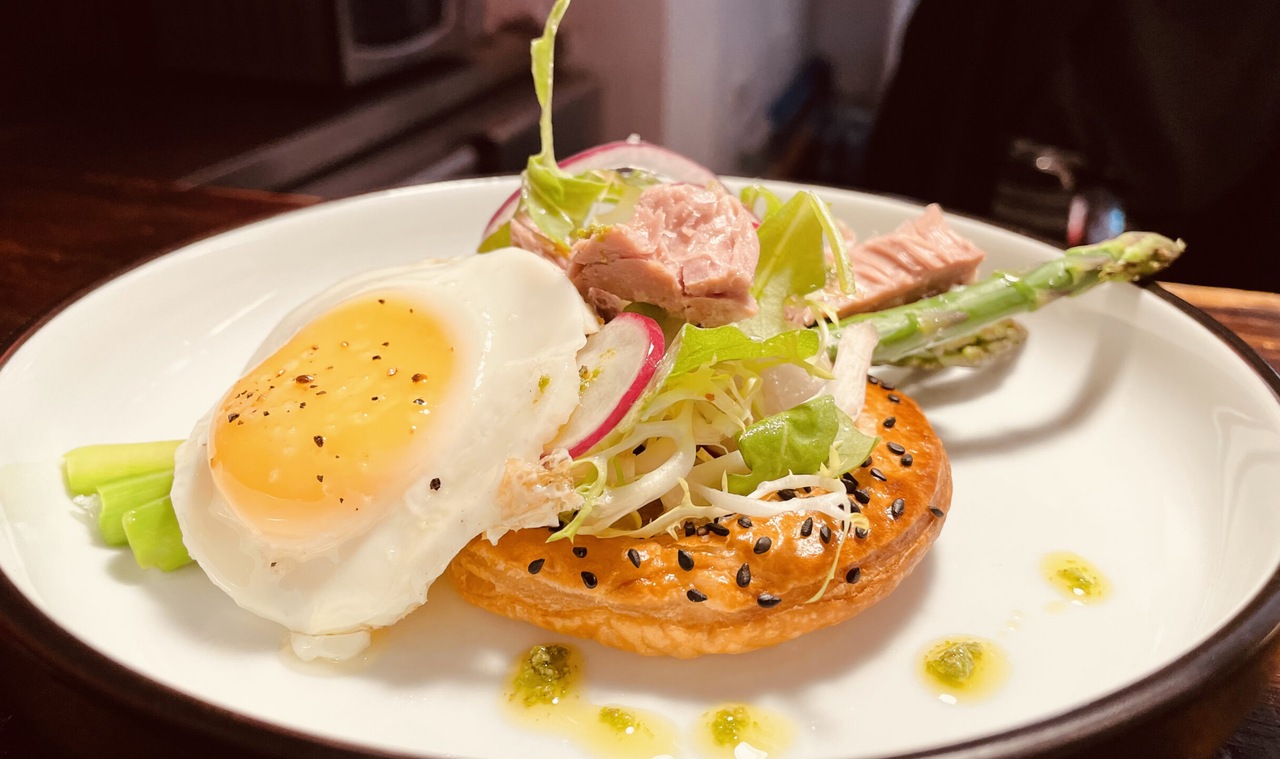 A platter of tempura soft shell crab with quail egg.

Muted wallpaper with a hint of Parisian decor, and paintings that lure you in, ultimately making you stay and eat just so you can linger a little longer, Trabuxu bistro is a hidden gem and also a dilemma. It’s a secret that locals want to keep to themselves but also want to share with the world. Sit down with a fine glass of red as you read through the Mediterranean menu but stop on the rigatoni with wild boar cheek and request the lamb even if it is not on the menu. 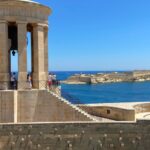 VALLETTA PRIVATE WALKING TOUR
See the sights of Valletta on a 3-hour private walking tour with a guide who provides insight into the history and architecture of Malta’s capital. Explore both the top attractions and less-visited locations in the city, hearing interesting facts as you go.  Price £117.68per group (up to 4).

Experience the spirit of Valletta on a stroll down Republic Street

Every city has that one street, a path that embodies the spirit, knows the history, and captures the very essence of the destination. In Valletta, it’s the 1 km long Republic Street that extends from City Gate to Fort St. Elmo. Not only is this street the main artery of the city, but the bustling cobblestone is also home to countless shops, restaurants, and cafes, offering a glimpse of Malta’s melting pot of cultures.

Unwind at the Upper and Lower Barrakka Gardens

The glory of eastern Valletta, the Upper and Lower Barrakka gardens near Siege Bell, is where the bustle of the city seemingly stops, bringing in the serenity of unhindered panoramic views and sprawling gardens dotted with noteworthy monuments.

The Upper Barrakka, located near Castille Place, is where you can see the cannon fire ceremony, and the Upper Barrakka Lift connects the city centre with the Grand Harbour. The Lower Barrakka Gardens can be found just above the St. Chirstopher’s Bastion, where you can watch the time fly by as you fixate on the oddly soothing experience of watching ships sail from the Harbour as you snack on traditional pastries from curbside shacks.

Drop by the Toy Museum 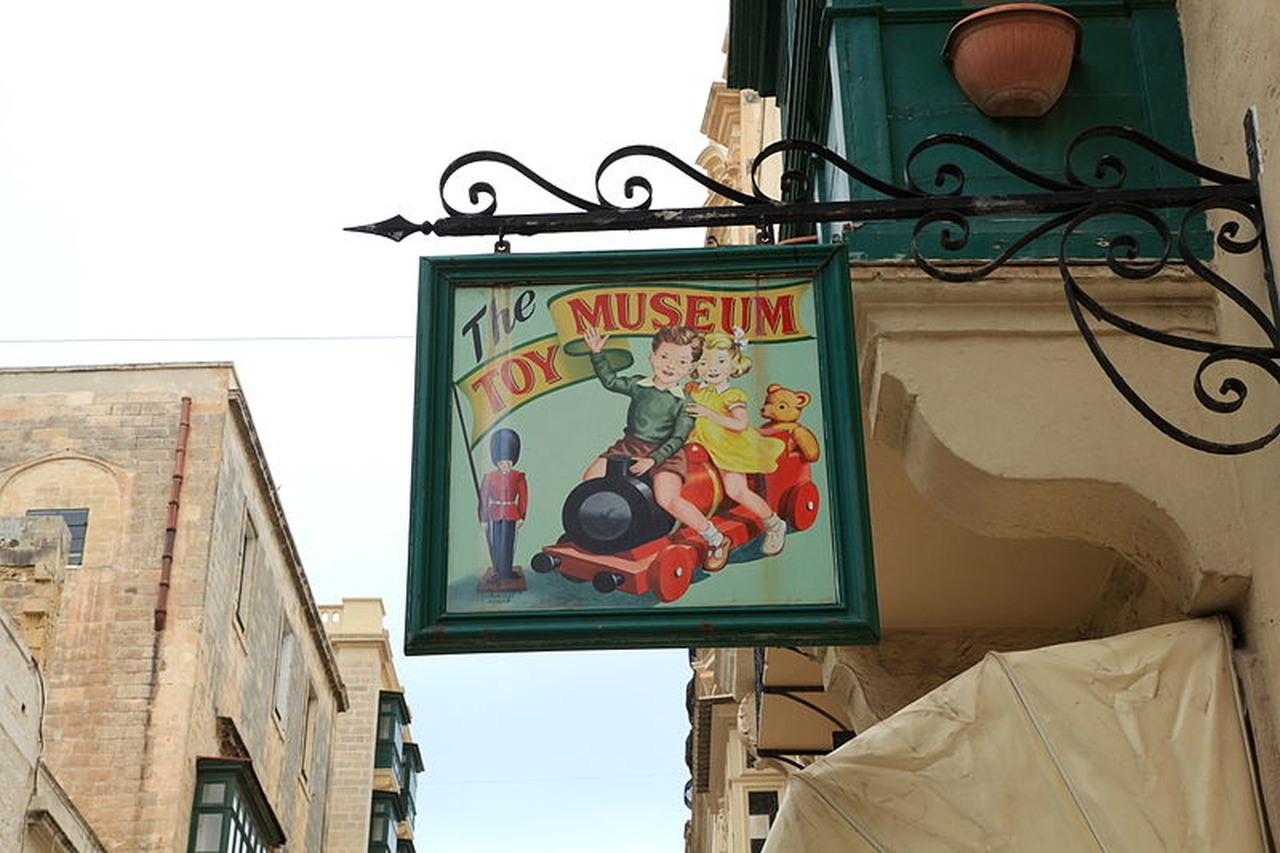 The Malta Toy Museum on Republic Street in Valletta is not a store but a nostalgic museum that takes visitors back to the 1950s, when the revolution of these trinkets began. The display includes everything from matchbox cars to dolls, all from Vincent Brown’s collection. This founder established the place in 1998 after he visited a similar museum in England and felt inspired to start his collection.

Spend an afternoon at the Valletta Waterfront 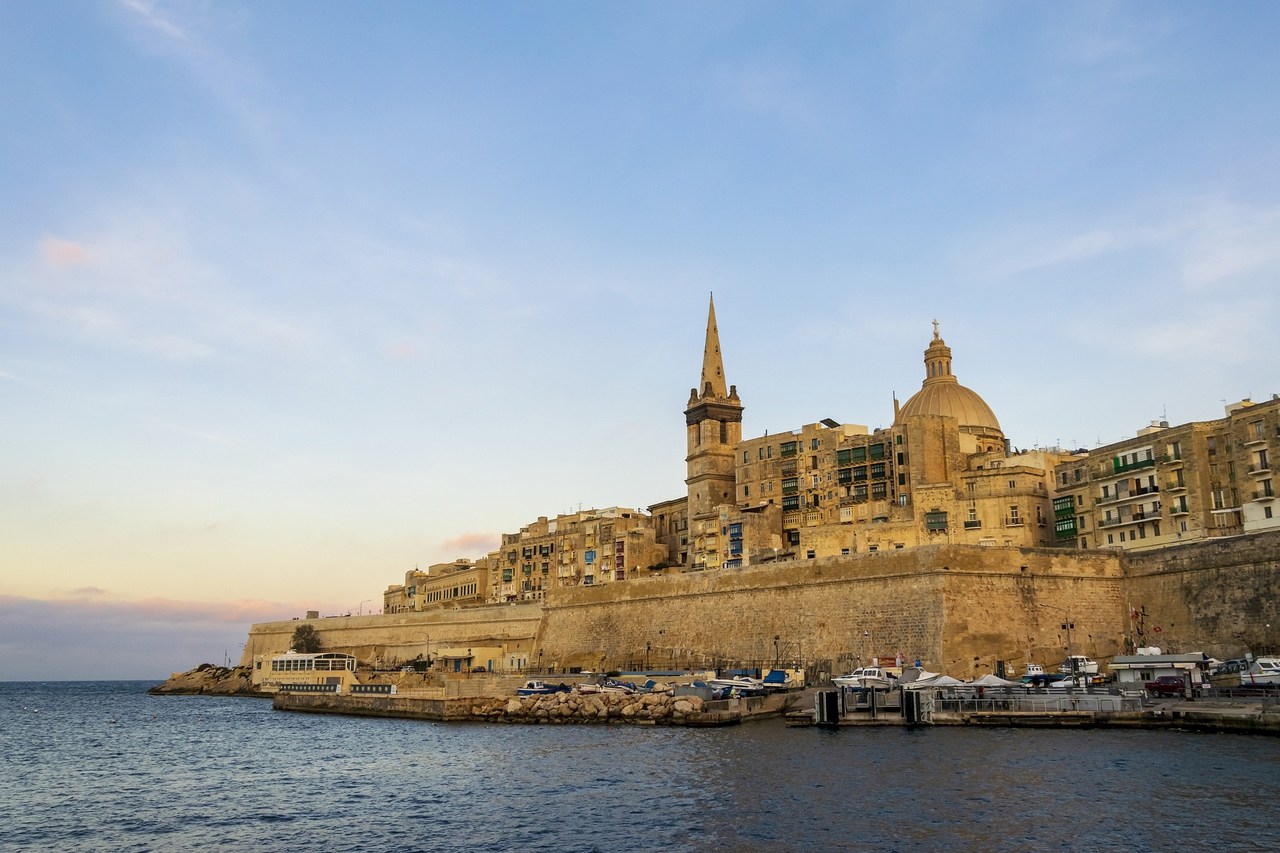 Valletta on the water

Another spectacular promenade that exemplifies Baroque architecture and its significance in the city, the Valletta Waterfront, boasts 250-year-old warehouses and a trifecta of landmarks: the Pinto Wharf, Forni Shopping Complex, and Church of the Flight into Egypt. The green balconies and vibrant venues are always glowing with jolly travellers on a shopping spree. When it’s time to kick back after a busy day, there are award-winning restaurants to enjoy a course of multicultural cuisine with exotic tipples. 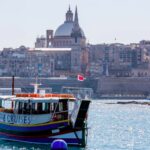 ENJOY A TRIP AROUND THE HARBOUR:
Take a boat cruise that shares the highlights of Valletta’s two natural harbours and ten creeks. Includes informative commentary about the region from its history to the present. From £13.08 per person

The history of this performing arts venue can be traced back to 1731 when Grand Master Fra António Manoel de Vilhena requested the theatre’s construction. The blue opal ceiling, vast gilt chandelier, and popular acoustics are magical elements of Manoel best observed during a show. Whether it’s an opera or a musical performance, don’t forget to catch a live show in this invaluable Maltese building before your departure. https://www.teatrumanoel.com.mt

I love Malta. I’m American and grew up there. I lived at armless house in gmangia. It was 69 to 76 when I lived there. I can’t wait to go back and visit. I love the history and the people.