Home WorldEurope How to travel by train across Europe
EuropeTravel Articles

Agatha Christie pointed out the romance of travelling by train. And while we may not want to shell out on the luxury of the Orient Express, we can at least indulge ourselves in a touch of exotic travel by rail in Europe — without breaking the bank.

An InterRail Pass provides unlimited travel on Europe’s trains for a given period in up to 30 countries (non-EU citizens, use Eurail Pass instead).

Once, the InterRail Pass was used predominantly by students with time on their hands during university vacations and the desire to travel cheaply. But today, in these ‘green’ times, it has become a fashionable mode of travel for all – and the pass provides maximum flexibility.

Here’s how it works. You buy a pass for a single country or a Global pass for up to 30 countries depending where you wish to visit. The card is valid for travel within a given period — say, any five days in a ten day period or any day for 22 days or a month. You can travel as often as you like — and you’re free to change your itinerary at any time.

After you have bought the pass, the only extra costs are a small seat reservation fee (slightly more for overnight trains). These can be paid for in advance if you know your itinerary, or on arrival at the station if you want to be spontaneous.

In fact, spontaneity is one of the great joys of the InterRail scheme. To be able to change your plans without paying a surcharge is a big benefit.

Rail is the new hip mode of travel. Not only do you avoid the slog of lengthy immigration and security checks at airports, you travel city centre to city centre. At the same time you’re doing your bit for the environment (trains have low carbon emissions) and you see the countryside rather than getting an airborne artist’s impression of it from 30,000ft. And along the way you meet the locals and sample the different lifestyles of the countries you visit.

There’s also much to be said for travelling outside the main holiday season. The trains and cities are less crowded and you can usually get into your favourite museum without having to wait in line at the door. Head north and east for the snow, south for the sun.

I set off on a 16-day rail trip around Europe and I discovered there was a certain pleasure in not knowing precisely which route I was going to take. When I arrived in Brussels, one possibility was to head north to Scandinavia, but so grim were the weather prospects there at the time that I decided to head east to Cologne, home to one of Europe’s finest cathedrals, before travelling on to Berlin. 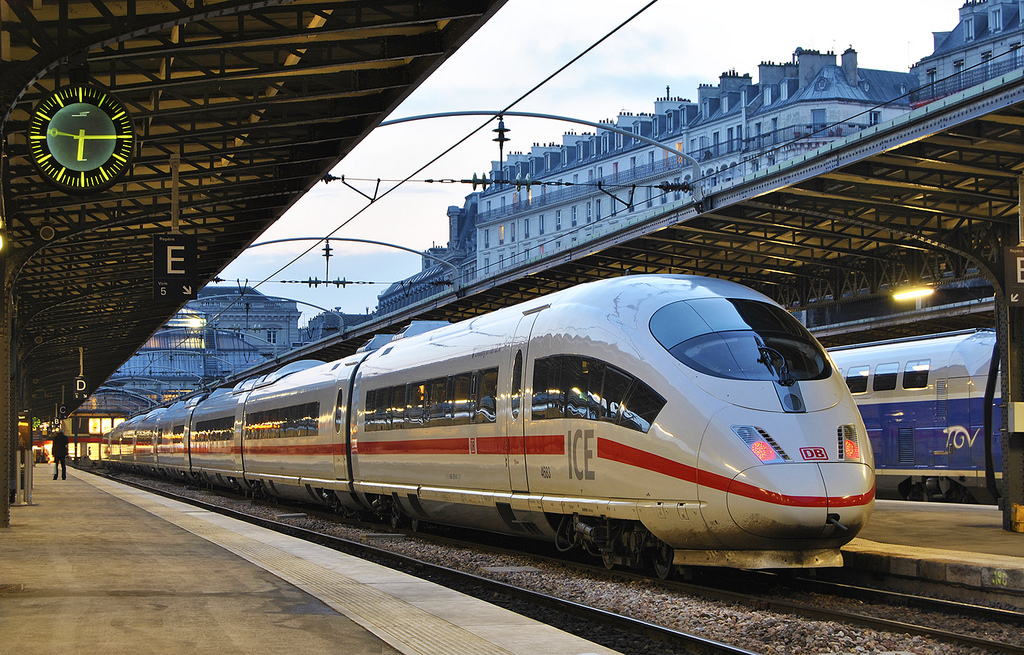 There, I dallied for a couple of days, soaking up the unique atmosphere of a city which, although technically reunified, is still very much a place of two distinct parts. Even with the Wall gone, there are constant reminders in East Berlin of the discarded political experiment.

For many, of course, seeing the effects of that failed experiment is part of the appeal. Many of the city’s finest sites, including the iconic Brandenburg Gate, are in what used to be East Berlin.

From Berlin, my InterRail pass carried me south to Prague and Vienna and then on to the incomparable delights of Venice, where I spent three days ogling some of the most beautiful buildings on the planet. In this extraordinary place you cannot walk for a minute without being bowled over by something that’s really worth a stop, whether it’s St Mark’s Square or the magnificent outline of the Church of Santa Maria della Salute.

With my cultural cup already more than half full, I decided Venice was a good point to begin the journey home.

I caught a fast train to Milan, not so much for a spot of retail therapy but to see La Scala and climb the steps to the roof of the cathedral for a breathtaking view of the Alps.

From there I made my way to Zurich and finally to Paris where, with a kir in hand at a pavement café on the Champs Elysees, I reflected on the whistle-stop tour. I had visited seven countries in 16 days, travelled throughout in comfort and every train left on time. Truly, transport of delight.