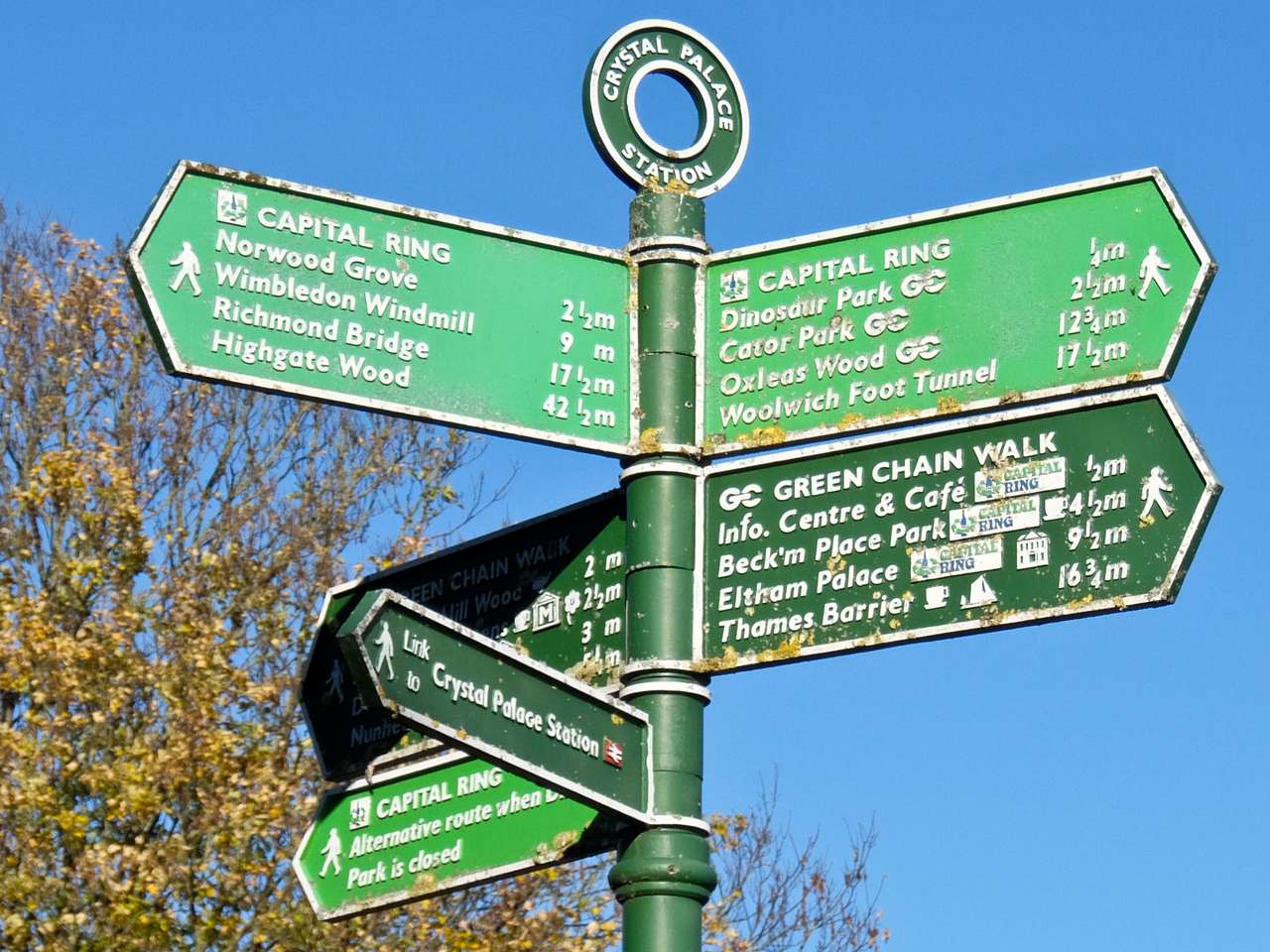 While the London Loop is the M25 of London walking, the Capital Ring is more like the North and South Circulars, passing through the inner boroughs, utilising their green spaces. It’s easy to access by public transport and you can do it in sections, catching a bus or a tube if you feel tired. There’s a surprising amount countryside including parks, commons and towpaths, and road walking is kept to a minimum.

I’ve done various parts over the years but on a sunny autumn day decided to tackle two sections from Crystal Palace to Wimbledon Park.

The route crosses three commons: Streatham, Tooting Bec and Wandsworth with residential parts of South London in between.

I take the train to Crystal Palace and start by climbing to the lofty heights of Norwood. It gets its name from the Great North Wood which once covered the high ground south of the Thames.

It’s confusing but there was also a Great South Wood, south of here, covering the Weald of Kent and Surrey.

I leave the streets, lined with large Victorian villas and enter Westow Park, my first bit of green. It links to Upper Norwood Recreation Ground and, after some road walking up Beulah Hill, once a popular spa, I enter Biggin Wood. 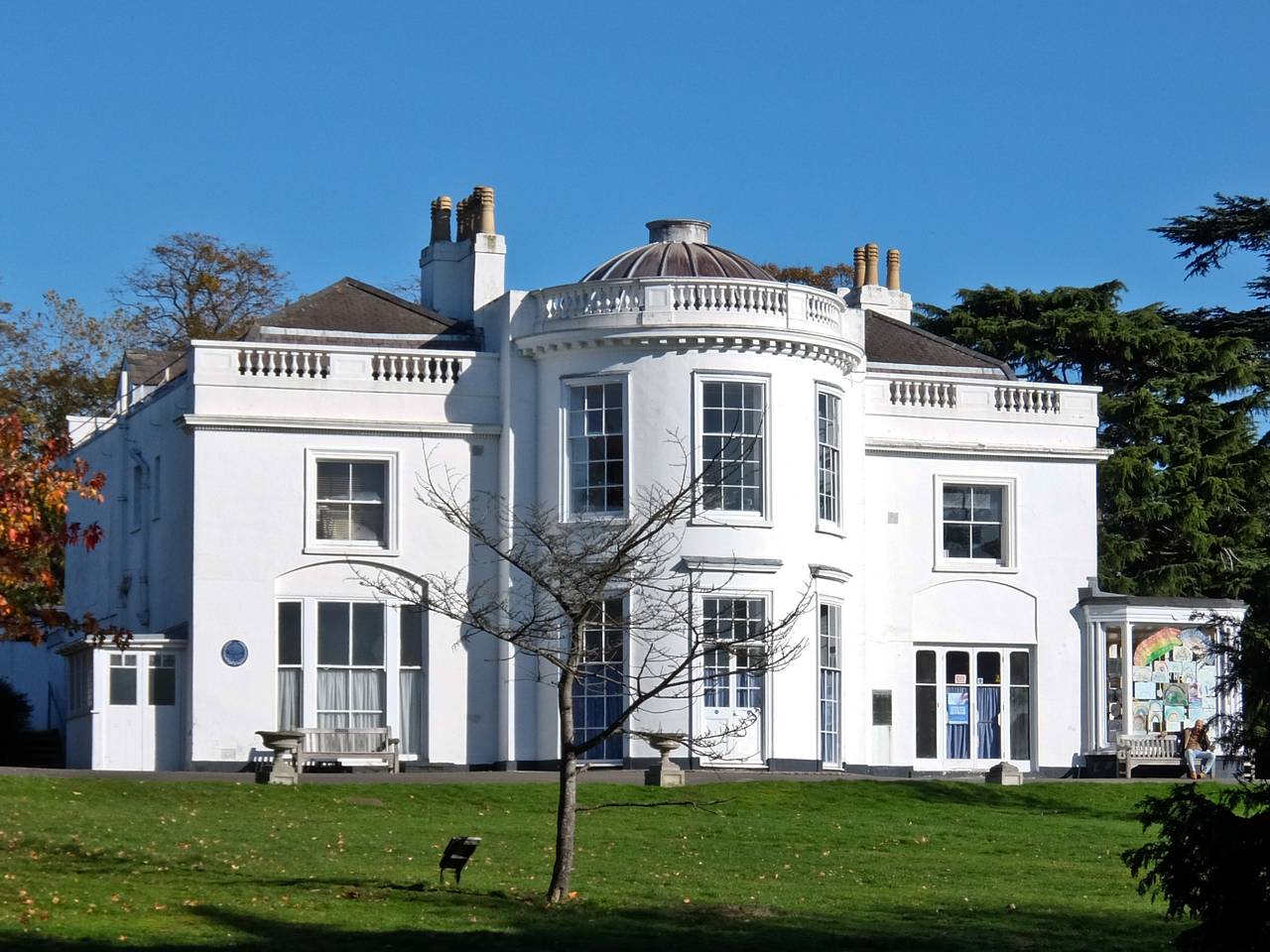 Norwood Grove – a handsome white 19th-century mansion built by the founder of the P&O shipping line.

This is one of the few remaining remnants of the Great North Wood. Just around the corner in Norwood Grove, is a handsome white mansion, built in the 19th century by the founder of the P&O shipping line.

I climb through the house’s extensive gardens and get panoramic views across Croydon and the North Downs from the top of the hill. The trail leads into Streatham Common, one of the largest open spaces in Lambeth, full of dog walkers and joggers.

There’s even a small brewery here and a popular park café, but there’s no time to linger as I head downhill into Streatham. The busy A23 to Brighton interrupts the peace and quiet I’m soon into quiet residential streets.

After leaving Streatham Common station I parallel the railway line and reach what looks like a Victorian mosque with stained glass windows and a series of domes. 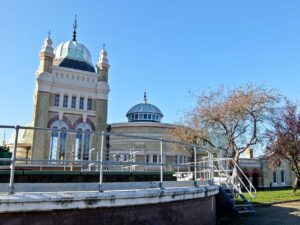 It’s actually Streatham Common Pumping Station. It was built in 1888, and still in use today. After some quiet road walking, I arrive at the entrance to Tooting Bec Lido, one of the oldest swimming pools in the UK, the Bec getting its name because of a medieval link to the abbey of Le Bec-Hallouin in France.

I’m now on Tooting Common and pass the lake, once a gravel pit, now home to exotic water birds, and follow a trail lined with horse chestnut trees.

It leads to the residential streets of Balham, immortalised by Peter Sellers as the “gateway to the south” and then enters Wandsworth Common. I stop for beer and fish and chips at the imposing Hope Pub. 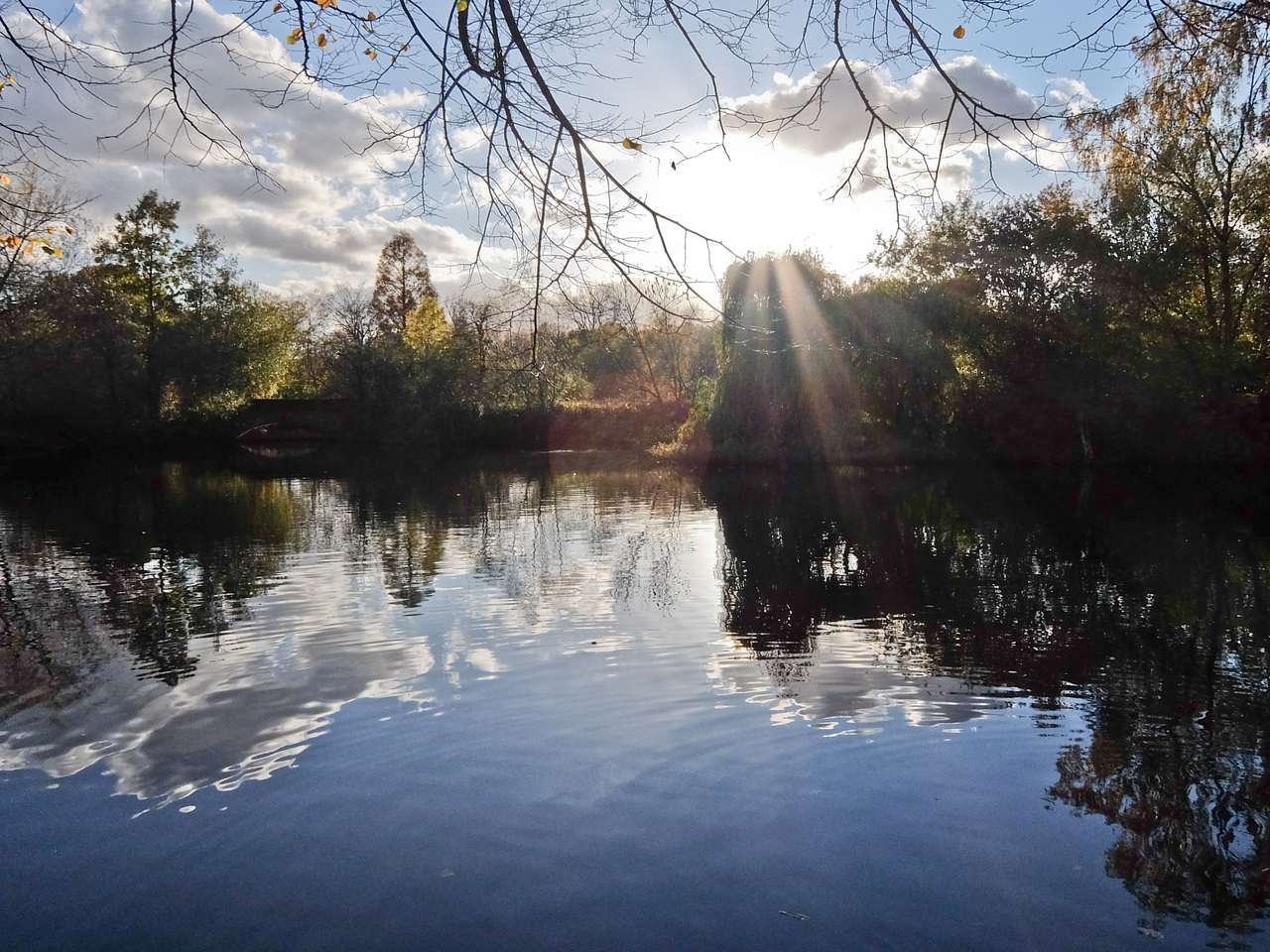 The lake at Wandsworth Common

There are a couple more lakes on the common before the forbidding walls of Wandsworth Prison, once the major place for executions for London and the south.

On the other sides is Wandsworth Cemetery, full of WW1 graves of soldiers who died at the military hospital in the nearby Royal Victoria Patriotic Building. I’m now in Earlsfield and cross the River Wandle, one of the Thames’ major London tributaries to reach Wimbledon Mosque, dating from 1977. It’s just a short walk from here to Wimbledon Park Station, my final destination.

When I started this walk, South London was like another country to me and I’ve been pleasantly surprised. The interconnected green commons minimise the amount of road walking and there’s a great sense of space.

Even the residential streets seem wider than those in the North, probably because they were developed later and had to make space for motor vehicles. Hiking from Crystal Palace to Wimbledon is definitely recommended and can easily be done in a day.