Home WorldEuropeGreece A tour of Naxos the largest of the Cyclades, Greece
GreeceTravel Articles 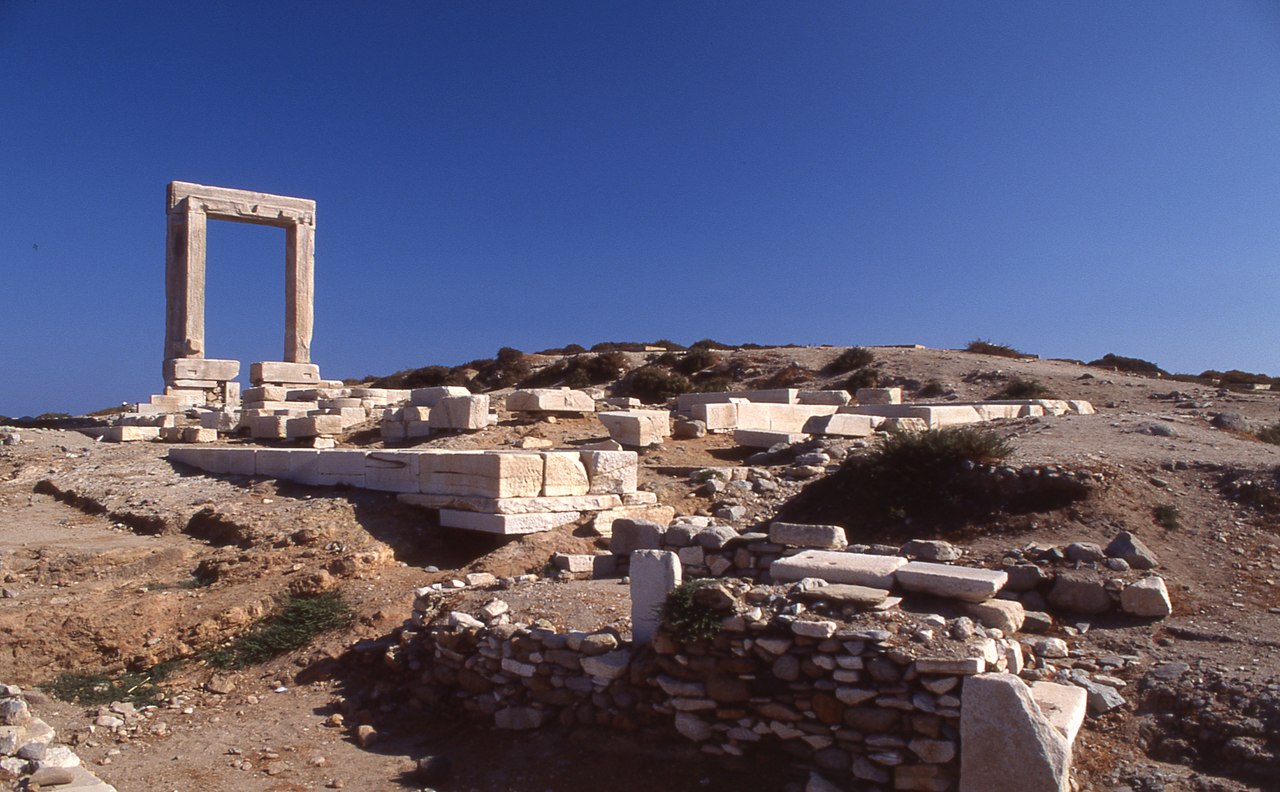 I’m heading for Naxos, supposedly the island where Dionysus, the god of wine and fun was born. It’s the largest of the Cyclades and probably the most fertile due to rain clouds forming on its mountains.

I can see those in the distance as I approach Chora, the capital, but I’m immediately impressed by the defensive citadel overlooking the bay, and the remains of the Temple of Apollo, Two imposing marble columns topped with a lintel, known as the Portara, rise high into the sky.

Like most islands, the port is lined with cafes and restaurants but behind it, steep alleys lead up to the historic neighbourhood, topped by the Kastro, a defensive bastion of twelve towers, although only one, the Tower of Crispi remains. It was built by the crusader Marco Sanudo in the 13th century when he founded the Venetian Duchy of the Aegean.  Still, many Venetian mansions survive, often with descendants of the original families still living there. Unusually for Greece, there’s a Catholic cathedral here and a 17th century Ursuline convent. Nikos Kazantzakis, who wrote Zorba the Greek, studied in the French Commercial School nearby 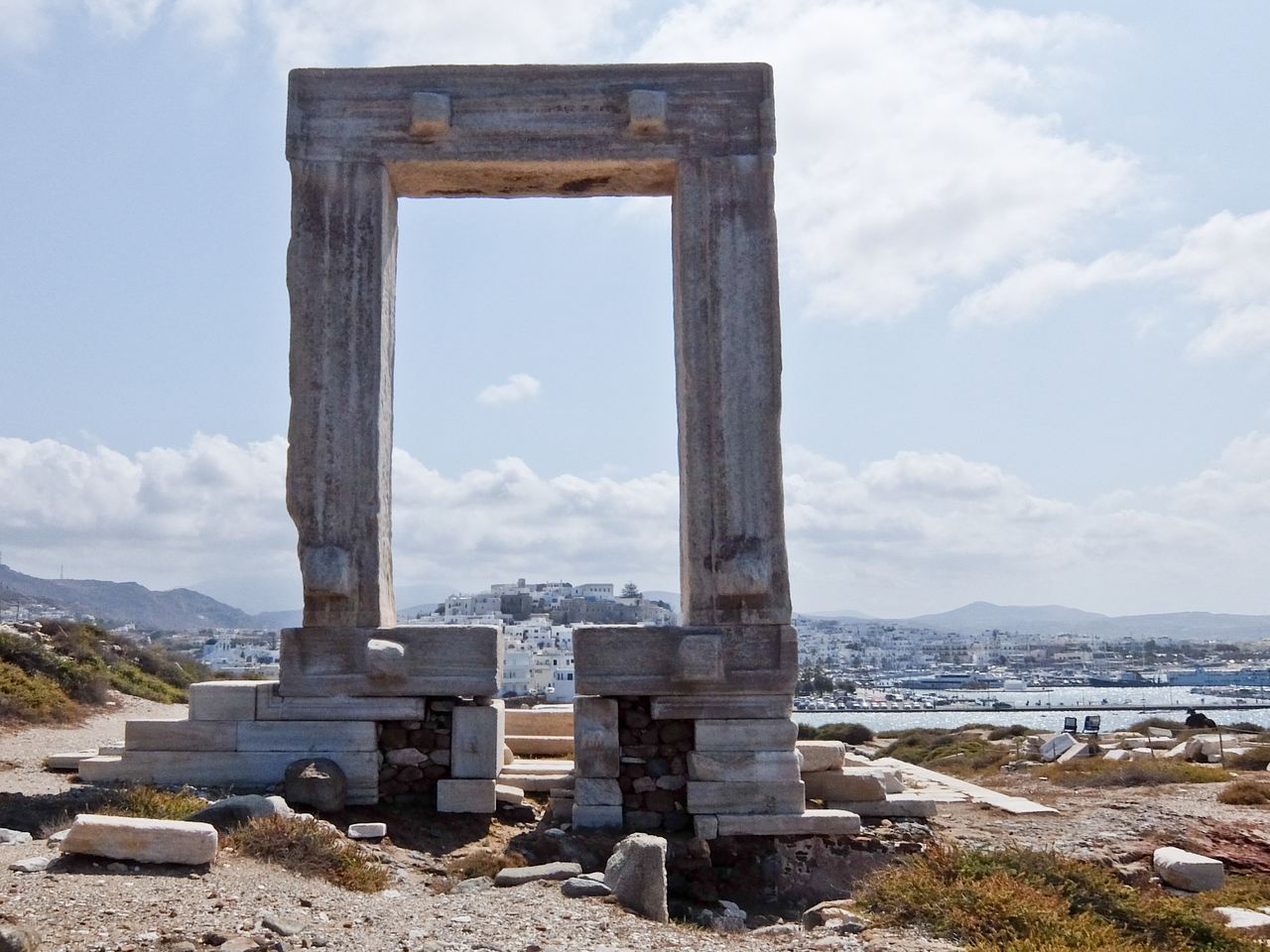 I brave the waves pouring over the causeway to cross over to the Temple of Apollo, started by the tyrant Lygdamis around 530 BC. Most of the stone was pillaged to build the Kastro but the Portara, or ‘Doorway’ was simply too big to cart away. According to mythology, this is where Dionysus duped Theseus into abandoning Ariadne on his way back from Crete. It’s an impressive sight and in the evening people gather to watch the sunsets.

I start at Agios Georgios, Hora’s town beach, and continue south past the beautiful Agios Prokopios, sandy and shallow in a sheltered bay just beyond the headland of Cape Mougkri. This merges into Agia Anna, and then there’s the long, unbroken stretch of sand which is Plaka Beach. More gorgeous bays follow, punctuated with rocky outcrops, as far as Pyrgaki, literally the end of the road.

The peaks around Mount Zeus are calling so I get in my car to explore the interior of the island. It’s very green, full of olive trees and grape vines with potatoes growing on the plain near the sea. As I start to climb I see white villages dotted on the hillside with the mountains towering behind them. 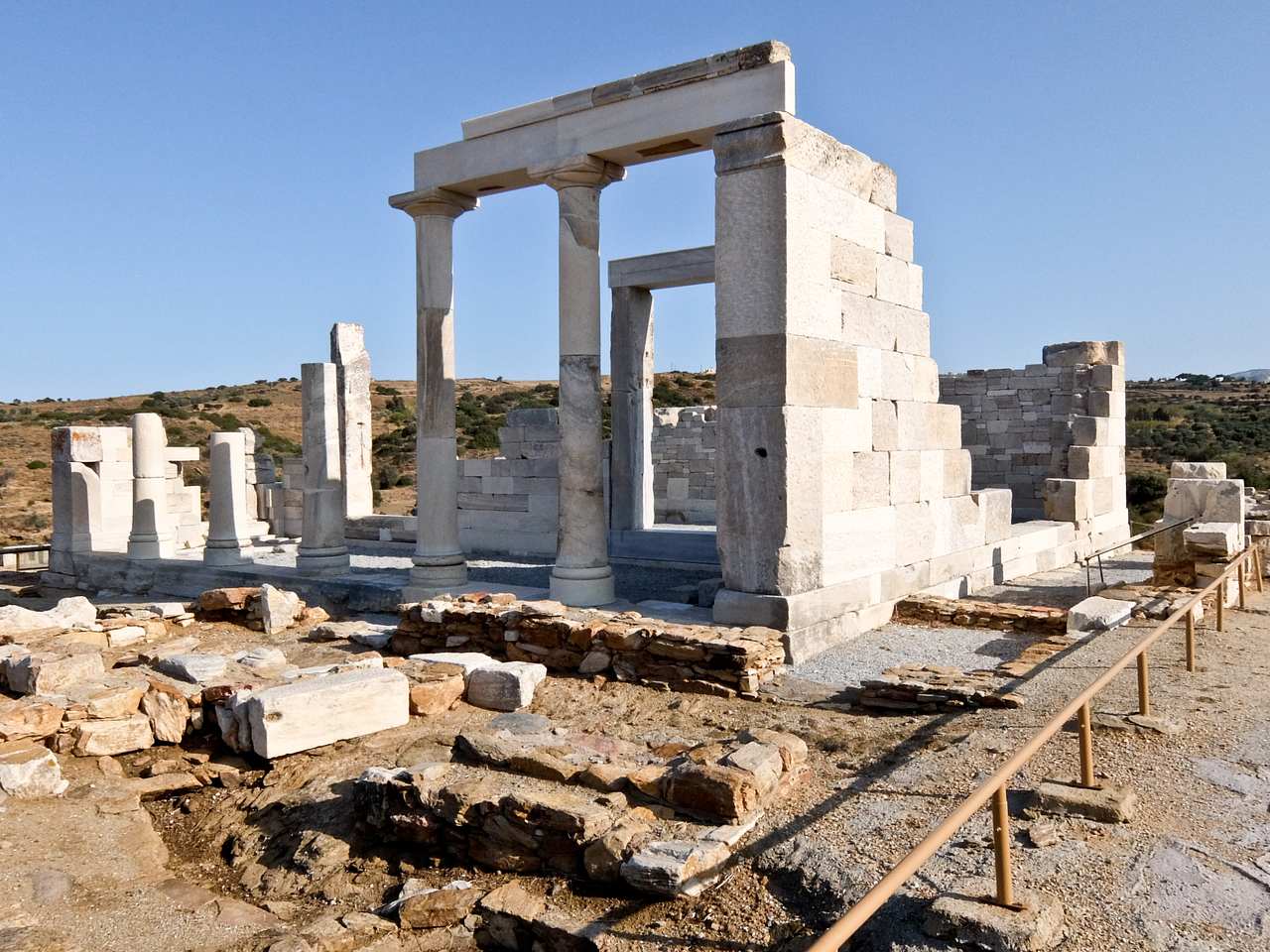 Demeter was the goddess of grain, and this temple was built to encourage the harvests in this fertile area.  It dates from 530 BC and later an early Christian basilica was built over the top of it. In 1977 German archaeologists moved to one side and the temple was partially reconstructed. It’s an attractive site, sitting proud in the middle of the fields and there’s an excellent museum detailing its history.

The area between Melanes and Kinidaros has been the island’s marble quarry since ancient times and the hillside is scarred by huge gashes. Naxos marble is not as fine grained as Paros but better suited to large structures rather than fine classical sculpture.  The rock would undergo rough processing at the quarry before being moved to the final destination.

In Flerio there remain two examples of Kouroi, large marble statues from the 7th and 6th centuries BC, each measuring about 5.5m. Both of these sleeping giants have broken limbs, perhaps damaged by bad workmanship, and they were abandoned forever. 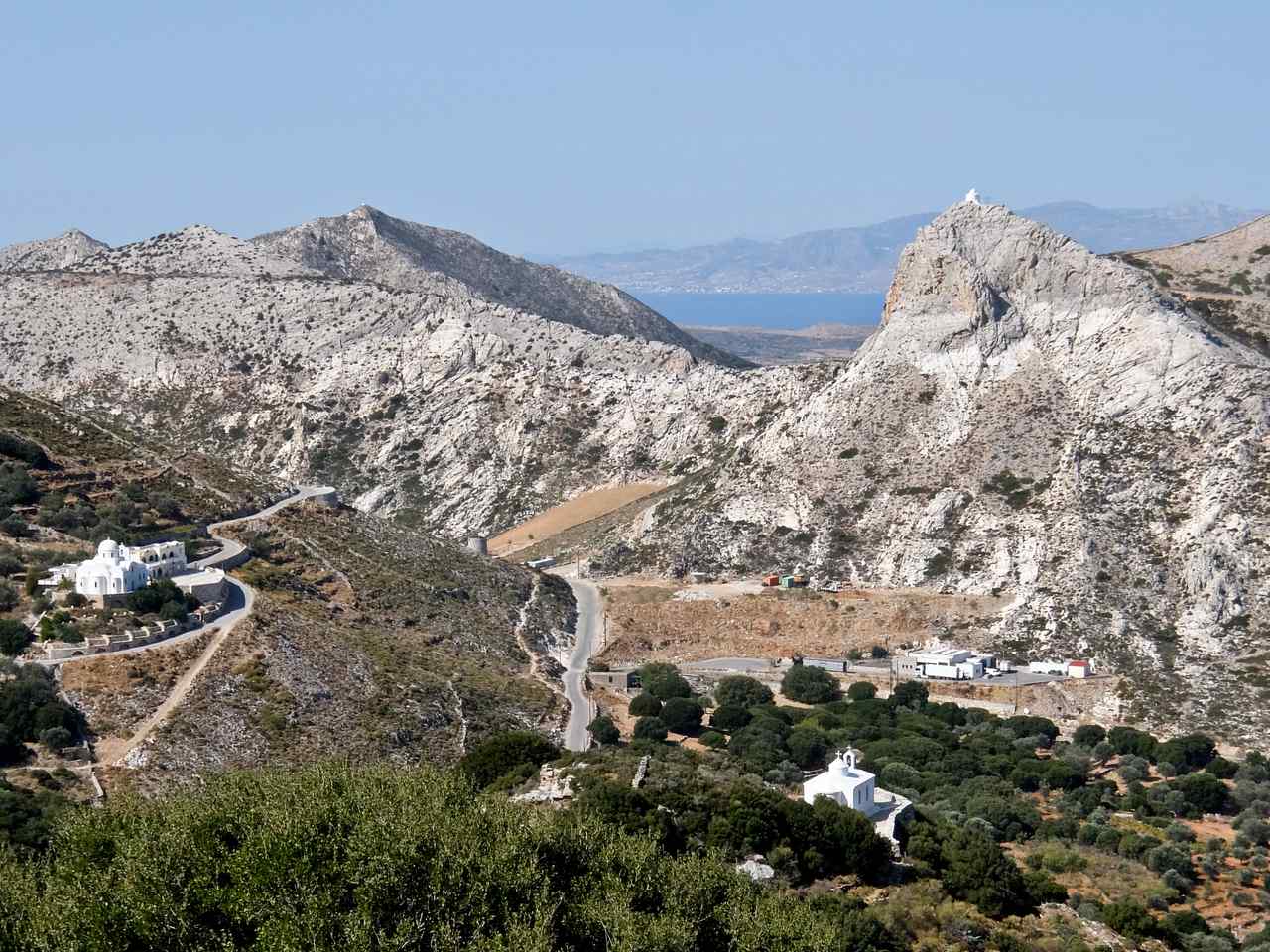 Naxos is the largest of the Cyclades group of islands and boasts the highest mountain.

Halki was once the capital of Naxos and it lies at the heart of the Tragaea mountainous region, about 20 minutes’ drive from Hora. Handsome old villas and Venetian tower houses remind you of its history and it’s full of arty boutiques. The local distillery, Vallindras Naxos Citron, was founded in 1896, and is still producing the island’s unique spirit Citron, made from lemon leaves.

At the centre of the island, Apiranthos sits at the foot of Mt. Fanari, at an altitude of 600m and often has snow in winter. It’s close to the marble quarries and its narrow streets are paved with the stuff. Add Venetian towers, pretty two-storey houses, and picturesque squares and you have an undeniable sense of grandeur. Interestingly many of villagers are descendants of refugees who escaped from tyranny in Crete in the 18th century and they retain their own dialect. 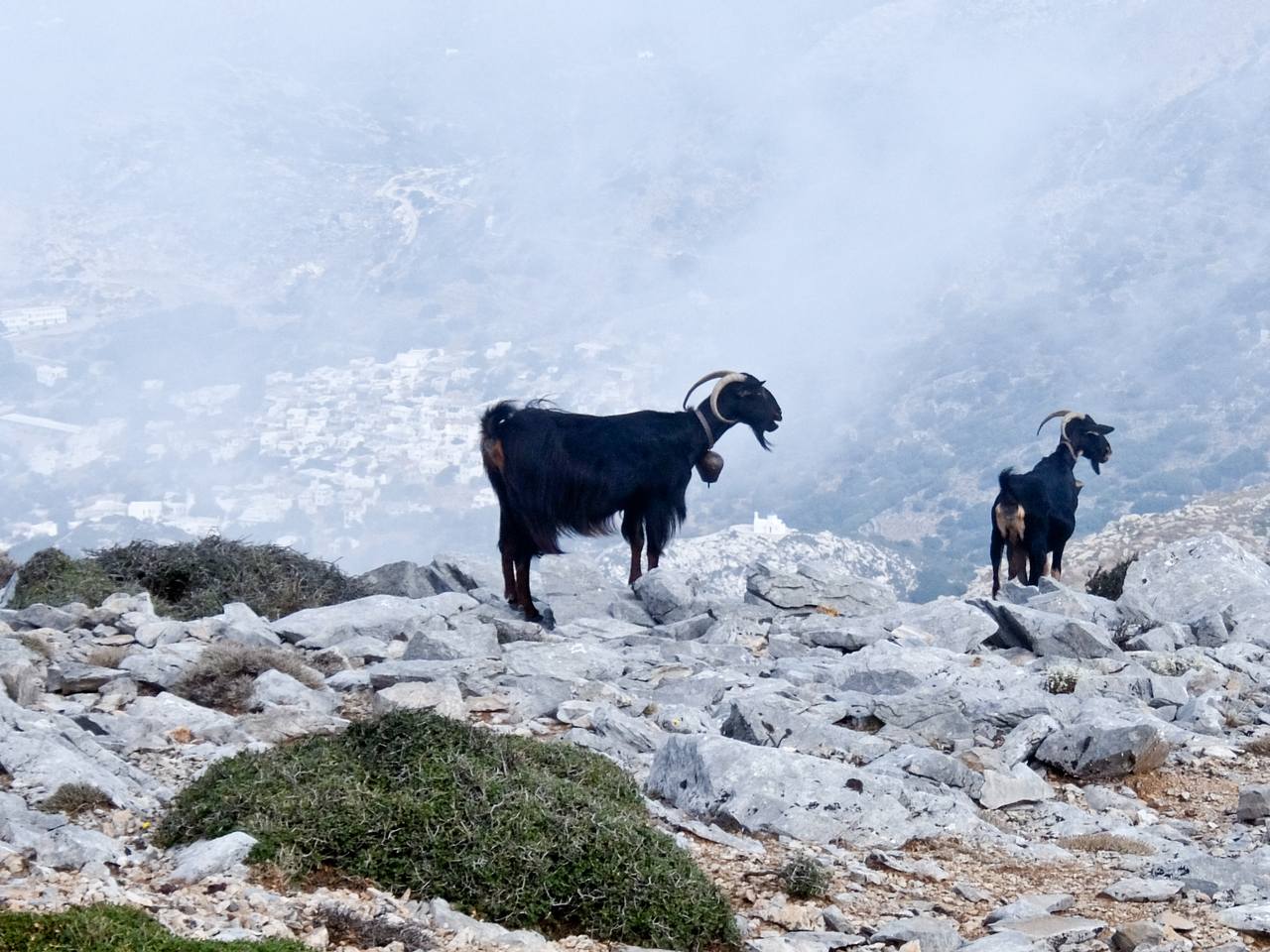 Filoti is the largest village in the region and is the staging post for climbing Mount Zeus. There’s a circular walk which takes around three to four hours, but I drive up to Agios Marina church at around 550m and start from there.

It’s just over an hour to the top on a well-marked trail and never very steep, although I’m caught in low cloud just below the summit. From there I’m rewarded with tremendous views over the whole of Naxos and its island neighbours.

GETTING AROUND: Naxos is a ferry hub so ideal for island hopping. The boat from Piraeus takes around six hours. Although there are limited bus services on the islands, a hire car is useful.

STAY: The Princess of Naxos is on the outskirts of town, opposite the beach, with a swimming pool.

EAT: Meze serves up excellent seafood on the port. To Elliniko serves traditional food in a garden inside the town. Kozi is good for grilled meats.