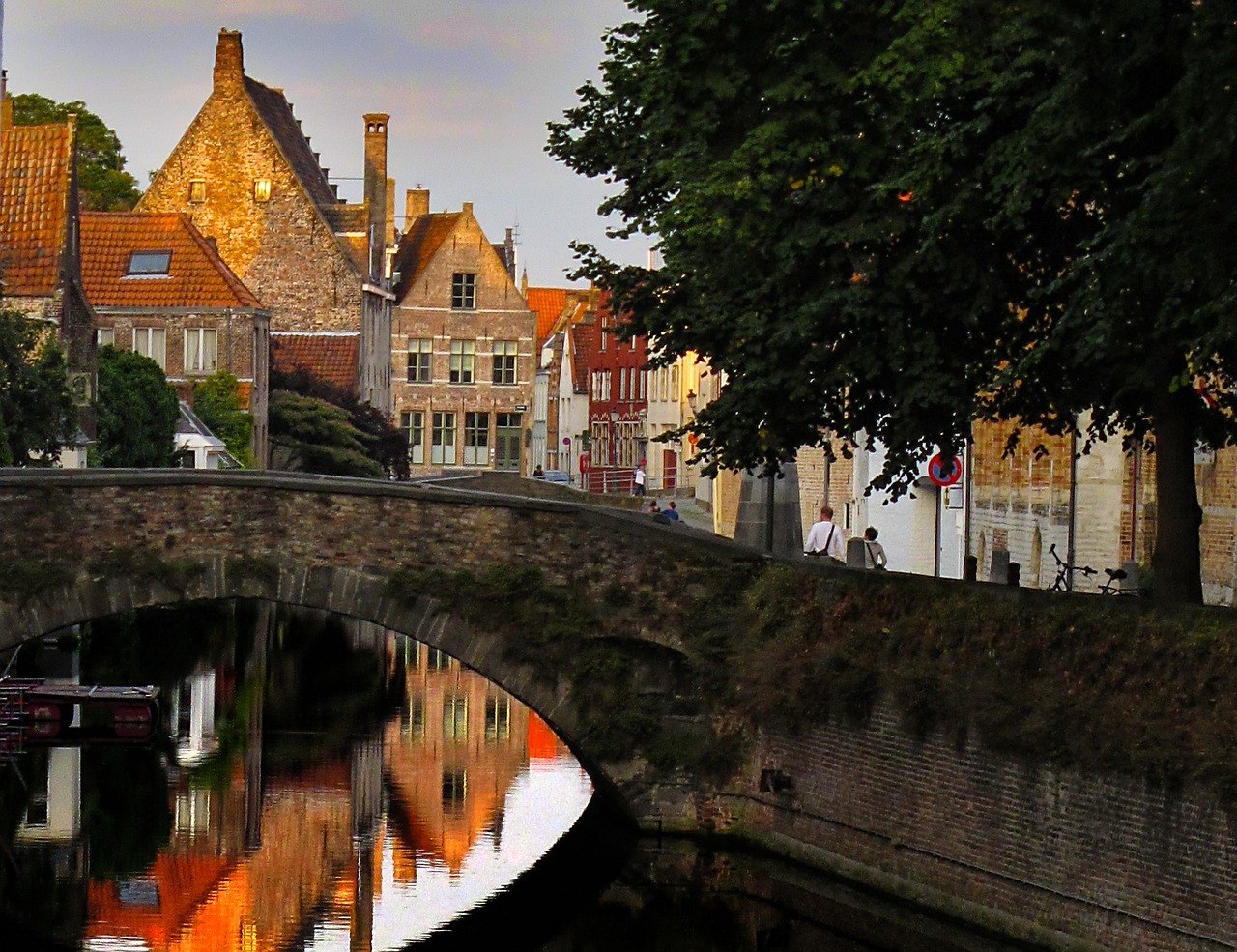 We all love to go off the beaten track sometimes, but if all you want is a short indulgent break, then make your way to the delightful city of Bruges and release your inner lip-smacking, camera-swinging, beer-swilling, sight-seeing, chip-guzzling, chocoholic tourist and… relax.

Bruges is home to just 20,000 people yet over three million tourists swing by every year. July and August are the favoured months, but in May and June or September when the weather is temperate you can still enjoy that tourist vibe and walking around this compact city will be more of a saunter than a day at the dodgems.

Known locally as The Egg, because it is confined within a series of canals giving it an oval shape, Bruges was featured in the film In Bruges starring Colin Farrell and Brendan Gleeson. But the city is far more appealing than this dark comedy suggests.

Traditionally, lovers flock here to rekindle their passions. Is it the maze of canals that shimmer as they flow beneath flowering arched stone bridges or the quaint cobbled streets and gabled roofs that overlook them? Or is it the horse drawn carriages or sumptuous architecture? Whatever the reason, this ancient city exudes romance from every nook and cranny.

And it is easy to get to, just a short hop across the Channel from Dover to Calais and a speedy hour and a half drive. Once there, ditch the car (there’s an underground car park at under ‘t Zand, the market square), and embark upon a twenty minute canal boat trip for a narrated orientation tour.

Or relax in al fresco cafés that edge Markt Square (the main square) and enjoy the hypnotic clops of horses’ hooves and the regular quarterly chimes of the carillon from the square’s belfry as it plays out Green sleeves. If you have the energy, climb the tower’s 366 steps to see the bells close-up and enjoy the views from its top. 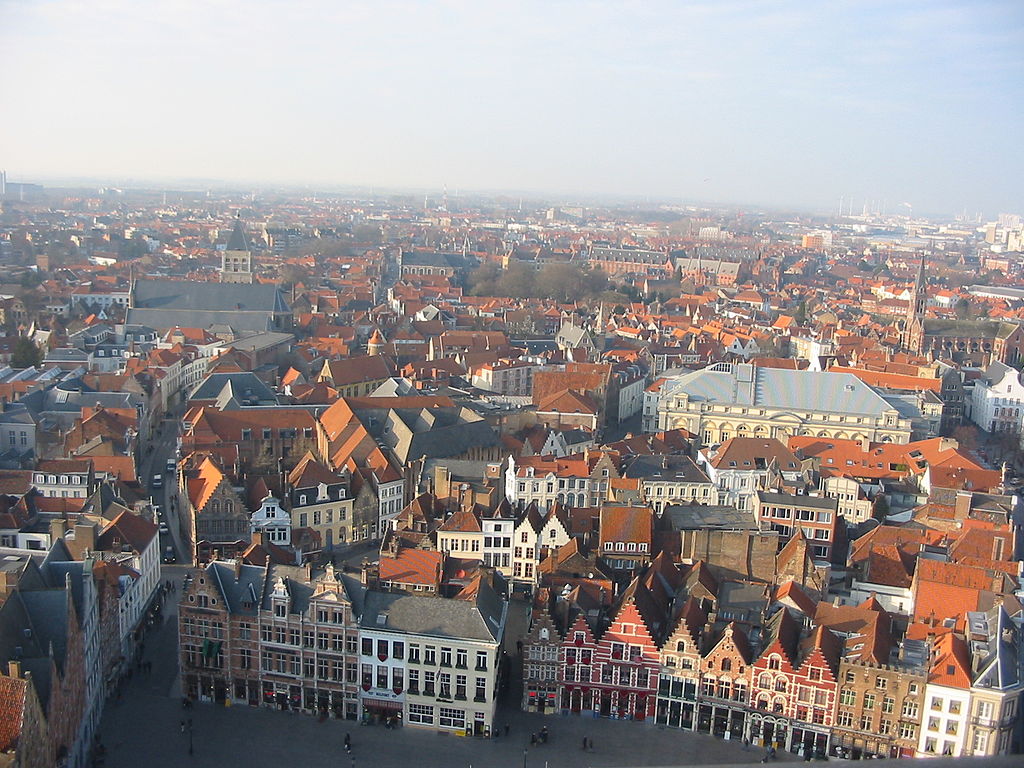 View of Bruges from the Belfry (c) Donarreiskoffer

There’s nowhere to sit in the next square – Burg Square – but it does have the most striking architecture Bruges has to offer. A flamboyant Gothic town hall with lacy white stonework nestles next to the old Public Record Office built in an exemplary Renaissance style, followed by the neo-classical former Court of Justice and opposite is the mystical looking Gothic/Renaissance Steeghere – the porched entrance to the Basilica of the Holy Blood. Its wooden door may be modest but it opens up to a vast, complex Basilica. Lighting is heart-poundingly dim save the flickering candles but it’s an apt ambience for its most precious relic – a Phial obtained in Jerusalem said to contain drops Jesus Christ’s blood.

If you crave a little culture, pop into the Groeninge art museum (12 Dijver), the best Bruges has to offer. Inside is an impressive display of Flemish art from the 15th century to the present day. Alternatively the nearby Gruuthusemuseum, (17 Dijver) a former medieval merchant’s house, has an interesting collection of tapestries and musical instruments.

Beer drinking is part of the social fabric of Belgium life and so it would be churlish not to visit Bruges’ last remaining working brewery, De Halve Maan (Walplein 26) where a fun 45 minute tour (5,5 euros) ends with a glass of the house beer. The bar extends into a vibrant al fresco beer garden made all the better when you find out that at €2 a glass, this is the cheapest place in town to guzzle this hoppy nectar. You’ll find the brewery next to a canal and the lovely Begijnhof, a 760-year-old nunnery whose gardens you can loiter in for a while if the mood takes.

Twin this with a visit to one of Bruges’ most popular beer bars, Brugs Beertje (Kemelstraat 5). There are over three hundred beers including a variety of sickly sweet fruit beers and a selection from small Flemish breweries such as De Ranke XX Bitter or De Dolle’s strong, blond Arabier.

But let’s face it, most are not here for the beer, but for the sublime Belgian chocolates. Within walking distance there are a staggering 40 chocolateries with enticing shop windows choc-full of pralines, figurines, sweets and slabs.

Two I particularly enjoyed were Dumon (Simon Stevinplein 11) that has a small café where you can enjoy a glass of white or dark hot chocolate, and The Chocolate Line (Simon Stevinplein 19) where chocolate is not only for eating and drinking… its for inhaling too…. Pop in and try it, its quite a buzz.

If you still have the stomach, then the Chocolate Museum, (Wijnzakstraat) offers an historical overview of this much-loved confection from its Mayan origins, to the Spanish conquistadores to the chocolate connoisseurs of today. Displays show utensils and imagery with narrative in English. The tour ends at the chocolate factory with a demonstration and samples to taste. To get there you pass a variety of ornate chocolate statues including an imposing larger-than-life chocolate statue of the US President, Barak Obama.

There is a chip museum but I would miss that in favour of buying the real things at a friterie. This is true Belgian street food, made with Mirabelle potatoes served in a cardboard carton, wooden fork and a dollop of mayo or ketchup to taste.

You can get any type of cuisine in Bruges but for a superb feast of Flemish food make a bee line for De Vlaamash Pot (the Flemish Pot) at Helmstraat 3-5. Plush red walls, ornate chairs, gold trimmings and chandeliers set the scene. Cheese croquettes, asparagus in a sublime butter and egg sauce, waterzoi (various white fish like cod and soul served together in a creamy soup) and my personal favourite Carbonnade a la Flamande (beef cooked in beer and brown sugar and served with chips) are all on the menu.

A word of warning though: Bruges is all about indulgence, so ditch the diet and prepare to dapple with debauchery, otherwise you will be missing out.

Currency exchange – avoid getting ripped off at the airport