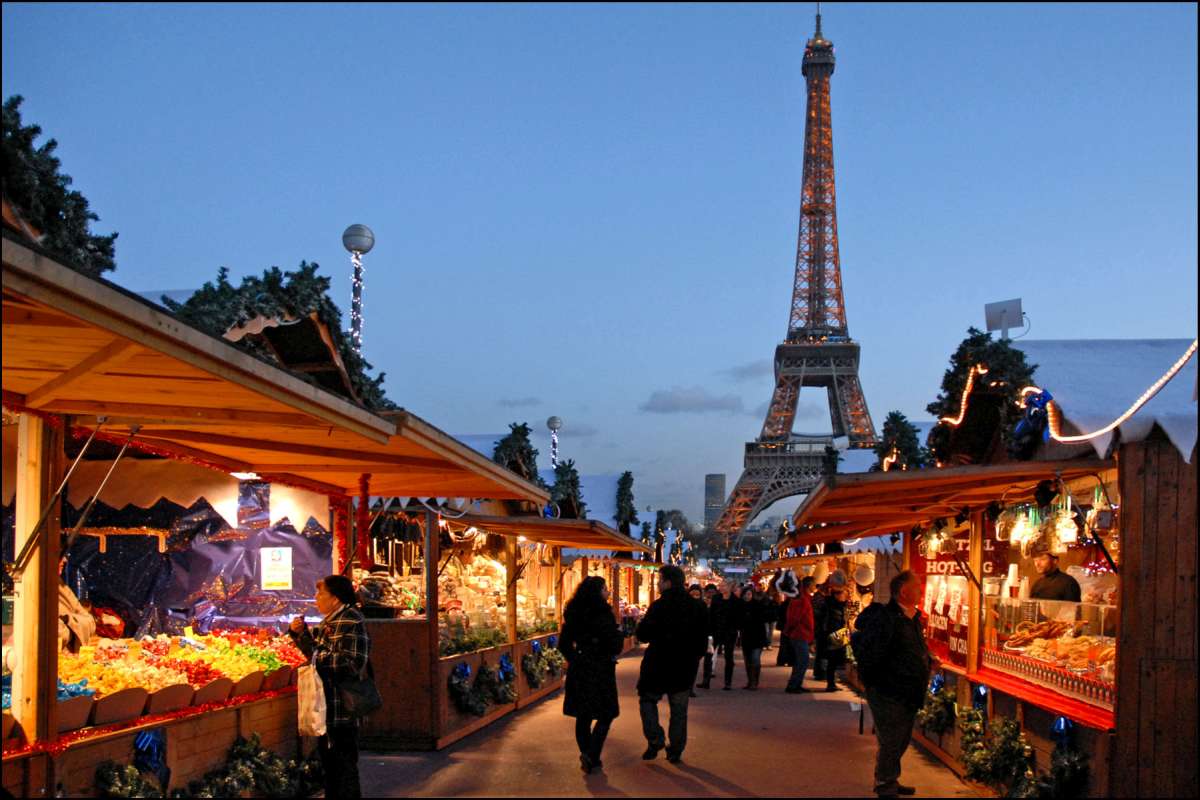 Where: Champs-Elysees, Paris
When: From mid November 2017 to early January 2018

Anyone who has stood on top of the Arc de Triomphe and caught the laser light show on the Eiffel Tower will know Paris as a City of Lights. At Christmas though the illuminations on the trees that fringe the Champs-Elysées and the fir trees on Rond-Pont take this accolade to a whole new festive dimension.

Shop windows, of course, look sensational and for designer shopping check out Rue St-Honoré, the oldest and finest shopping boulevard made which has recently been extended to Rue du Faubourg-St-Honoré.

The city opens up its annual ice rink by Hôtel de Ville (December 19 to March 1??) and for this year there is also one indoors in the Grand Palais. From December 14 up to January 4 there will be DJs and light shows which will look spectacular under its glass vault.

This year Paris is hosting a range of photographic events during November for the city’s Month of Photography, including the Paris International Photo Fair at the Grand Palais (13-16 November).

Incidentally, for those that want to be in Paris on Christmas day, it’s good to know that public transport will be open for business as usual as do many restaurants and cafés.

You will most probably arrive at the Gare Lille Europe, just a short walk from the gorgeous, compact town centre that oozes youthful energy and affluence.

You’ll feel and see it in Old Lille where the greatest fashion and designer shops show their wares. And though they are there all year, they come alive over the festive season.

Follow the irresistible aroma of cinnamon and roasted chestnuts to Place Rihour, an impressive square with an equally impressive war monument. For over a month, the 80 chalets of the Christmas market do what they can to entice shoppers. For edible goodies, look out for regional products such as gingerbread, waffles and crepes.

In the Old Quarter, the streets compete for attention with their decorations. At Rue de la Grande Chaussée it’s all about elegance and at Rue de la Monnaie there’s evergreen garlands with gold and red ribbons, to the trendy Rue Esquermoise where huge disco balls sparkle overhead.

Incidentally, Rue Esquermoise is home to Meert Restaurant & Tea House, where a list of teas as long as your arm, and the best waffles in town can be savoured.

Numerous antique shops and art galleries line the streets and a pleasant market enlivens the Place du Concert every Sunday morning. In the centre and pedestrian streets, you’ll find the big department stores and international brands.

On the Grand Place, the Furet du Nord is one of the biggest bookshops in Europe. In the station district, the Euralille shopping centre, designed by Jean Nouvel, houses a hundred shops, restaurants and a hypermarket beneath its futuristic design. It’s not atmospheric but a place to shelter and shop if it should rain. 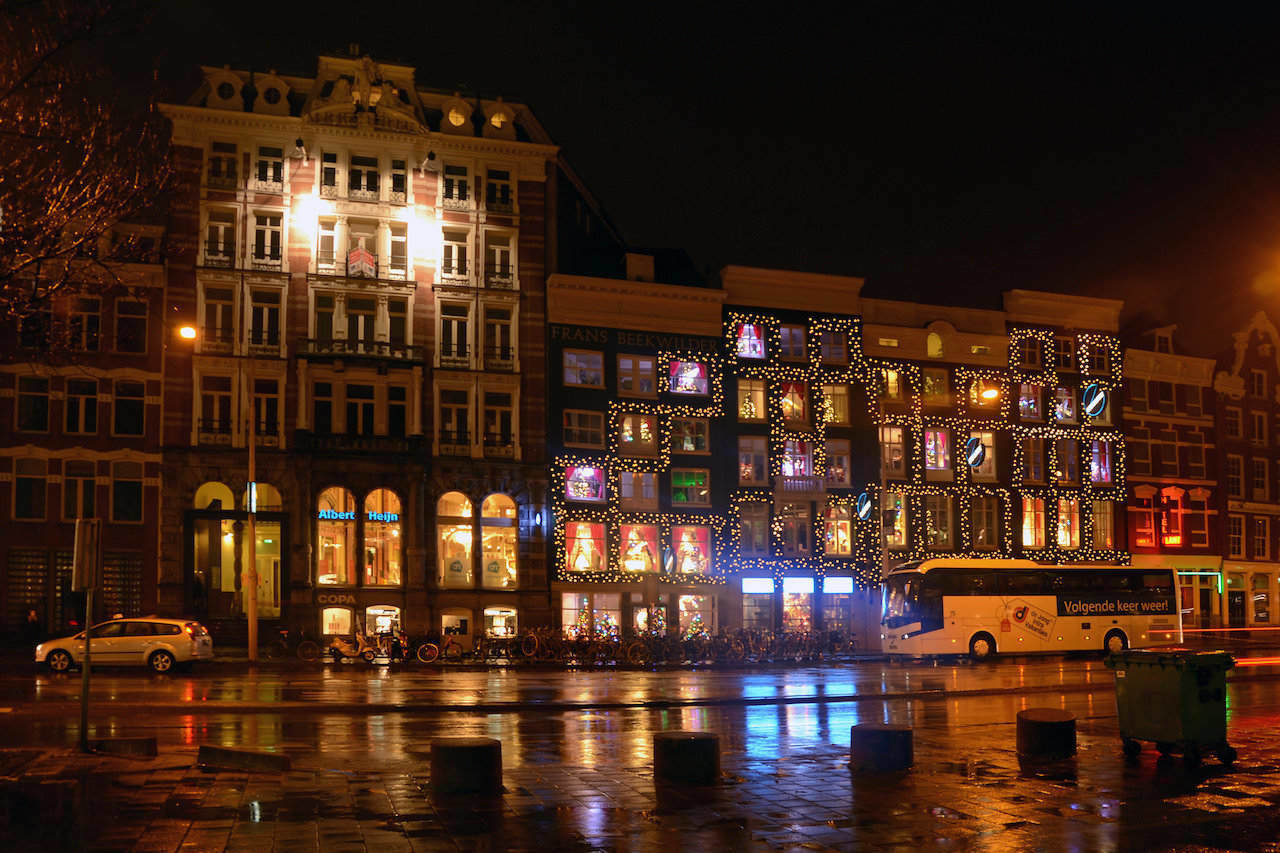 You may be able to tip-toe through the tulips in the summer, but Amsterdam in winter is just as appealing. The tall gables are still elegant and there is some romance in sharing a brisk walk along one of its many canals and then stopping every now and again for a pint of Dutch beer.

Or even nipping into a museum or two. The Rijksmuseum, where you can see Rembrandt’s The Nightwatch looks spectacular after its recent refurb. Or the Van Gogh museum in the Amsterdam Hermitage is a lovely way to spend an afternoon.

There isn’t one large Christmas market, it’s more a case of several dotted around 26 neighbourhoods. However there will be an illuminated 20-meter tree in front of the Royal Palace.

Some years, when the temperatures drop -4°C, the canals freeze up and turn into skating rinks. But this is not reliable. However, there are two great ice rinks that are available come-rain-or-shine. One of these is the ice rink at the Museumplein in front of the gorgeous Rijksmuseum. And another at Leidseplein where the aromas of waffles and sausage from the surrounding stalls will be in the air as you skate.  This is also home to a small but quaint Christmas market. 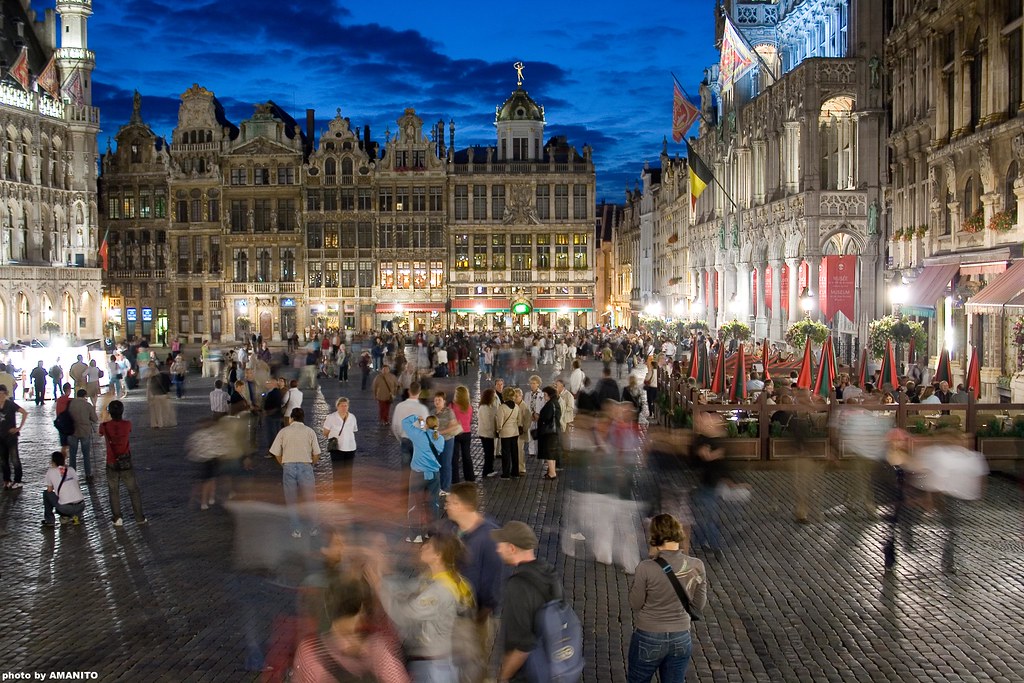 Where: Around Grand-Place, Bourse, Place Sainte-Catherine and Marché aux Poissons
When: 24 November 2017 to 31 Dec 2017

It is the capital of Belgium and seat of Europe yet this tiny city is famed for a bizarre collection of offerings from fine chocolates, chunky chips and waffles, and a comical statue called the Mannequin Pis. The urinating child has been standing above his basin at the corner of the Rue d’Etuve and the Rue du Chene, a few minutes’ walk from the Grand Place, since 1618. He has an extensive wardrobe so he may well be wearing something festive over Christmas.

But nothing beats the architecture, especially around the Grand Place where some amazing examples Art Nouveau and Art Deco architecture hem the square. These gorgeous buildings form an elegant backdrop to the annual Winter Wonderland, which takes place November 28 right up to January 4. Every evening there is a dazzling sound and light show and an illuminated ferris wheel.

Around 240 wooden chalets topped with fake snow are set up around the Bourse (Stock Exchange), Place Sainte Catherine (where you will find merry-go-rounds on Place Sainte-Catherine), and the Marche aux Poissons (fish market) selling all sorts of gifst. Look out for pâté, jam, truffles, nougat, biscuits and, in particular, speculoos (spiced shortcrust biscuit baked during the festive season).

There’s also a seriously big skating rink at 200 feet long which is easy to find by the Marche aux Poissons.


Read also: Top 10 things to see and do in Brussels