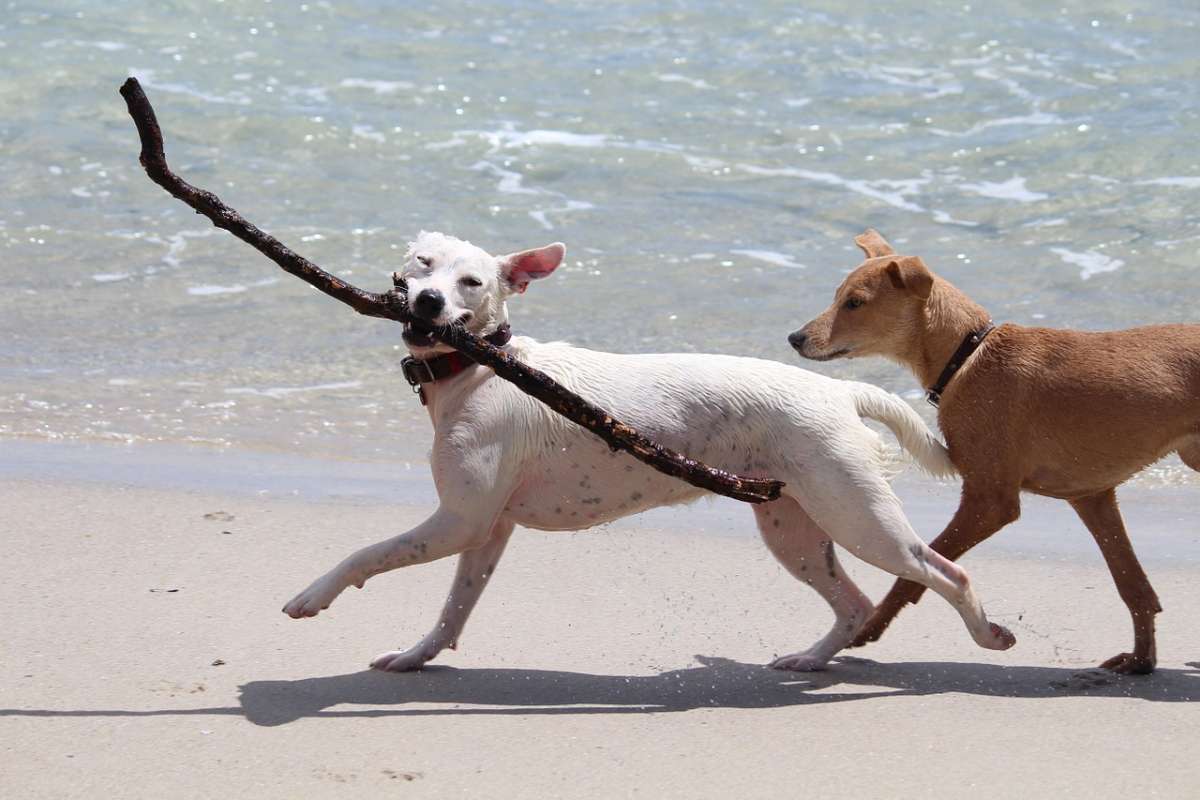 Sweep and I decided to see what the Isle of Wight offers dogs. Sweep is a 7-year-old cocker-poo with the intelligence of a poodle and the enduring charm of a cocker spaniel.

I travelled with him, my friend Sarah, his owner, and a copy of the recently published booklet, Pawprint – a doggy guide to a holiday island. An island where canines can be taken, without the bother of pet passports and expensive inoculations!

We decided to go in October as after that time all the beaches are open to dogs.

The ferry from Portsmouth to Fishbourne augured well, with plenty of water bowls; a whole deck where dogs are allowed and a special litterbin for any excited furry passengers.

Once on the island we headed for our accommodation, Mersley Farm, a garlic farm started 12 years ago, by Colin and Jenny Boswell. It’s a great place, with a comprehensive shop selling everything garlic related and a thriving café as well as all the information needed about the amazing bulb.

Although Sweep had to be on a lead he was happy, although a bit alarmed by the field of Highland Cattle. Things were calmer in our lovely “Mill” cottage where we were pleased with the double door from the lounge, which meant that upstairs could be dog free.

That evening, we visited The Dairyman’s Daughter which we soon realised coincided with the weekly meeting of the Isle of Wight Folk Club. Sweep behaved in an exemplary fashion and was an instant hit with all – and even seemed to be listening with interest to the many beautiful old English songs.

Next day, assiduously reading our Pawprint guide, we visited Niton and examined one of Golden Retriever “Noah’s” favourite haunts. Nicknamed “Little Colorado” this is the National Trust land at the end of the old ruined road from Niton to Blackgang. To the right is the huge rock face of Gore Cliff but the guide told us to keep away from this area, and instead head left from the NT car park through grassy mounds, and a wide, rock-edged hidden valley.

There are long runs for dogs and great views of St Catherine’s Point for owners, although sadly the weather was not kind. We decided to abandon the walk a bit earlier than planned and treat ourselves to a delicious Italian lunch at the Bonchurch Inn, where once again, bringing Sweep inside was not a problem.

I was anxious to go onto Seaview, as I had last visited as a teenager, and wanted to see how much I could remember and also because once again it features in Pawprint. It was great for Sweep who wagged his tail enthusiastically, whilst running along the wide beach and meeting other dogs. The tide was out and his enjoyment at sniffing the seaweed was palpable.

On our way home we stopped off for tea at the impressive and historic Priory Bay Hotel with its famous plaque stating that Ernest Bevin, Foreign Secretary in 1948, here prepared his speech for the House of Commons when he proposed the establishment of a Western European Union.

In the sunshine of the next day we drove to Mottistone Manor. It was a great treat for Sweep as we left the House behind and climbed the wooded path to the Neolithic Long Stone and walked to edge of the Tennyson trail with the most amazing views over the cliffs. We eventually went off to lunch at the 600 year old Sun Inn where Sweep was given a dog biscuit, by owner Lesley Blanchard – a good move as it stopped him being too jealous of our bountiful lunch. After we drove down the Military road along the coast overlooking Compton Bay on to where the poet Tennyson lived at Farringford House.

On our last day we visited Alum Bay and took a dramatic walk to the Needles. Sweep was on a tight lead for safety although the viewpoint was fenced and netted and there was no fear of falling down the cliffs. At the end of the land mass is the Old Battery, the Victorian coastal fort built in 1862, because of a threat of French invasion and now a museum owned by the National Trust. It was extremely windy but so good to get a good view of The Needles and the most westerly point of the island.

On our last evening we had to visit a pub with a dog in the title. The Pointer Inn which was crowded with Cribbage players in the Bar and diners like us, tasting the excellent food. Again Sweep was allowed to accompany us and was given a very upmarket drinking bowl.

We were away just 3 nights but the difference of the microclimate found on the island, the exhilarating walks and good food, made it a successful and fun break, and we came away feeling real well and refreshed. It’s not difficult to see why many of the tourists we met on our travels, visited on a regular basis.

Get there: Lucy travelled on Wightlink‘s 40-minute Portsmouth-Fishbourne crossing, one of three routes. Car ferries also operate between Lymington and Yarmouth (35 minutes) and there is a passenger catamaran service from Portsmouth Harbour to Ryde Pier Head (approx. 20 minutes). Dogs travel free on Wightlink ferries.

Stay: Mill Cottage at Mersley Farm, Newchurch. A one-week self-catering break at Mersley Farm (home to the world-famous Garlic Farm) costs from £87 per person (based on six-sharing) and includes return Wightlink car ferry crossings from Portsmouth or Lymington. Short breaks are also available.

Must visit dog-friendly pub: The Sun at Hulverstone offers visiting canines a welcome biscuit and is starting its own doggy-menu for hungry hounds.