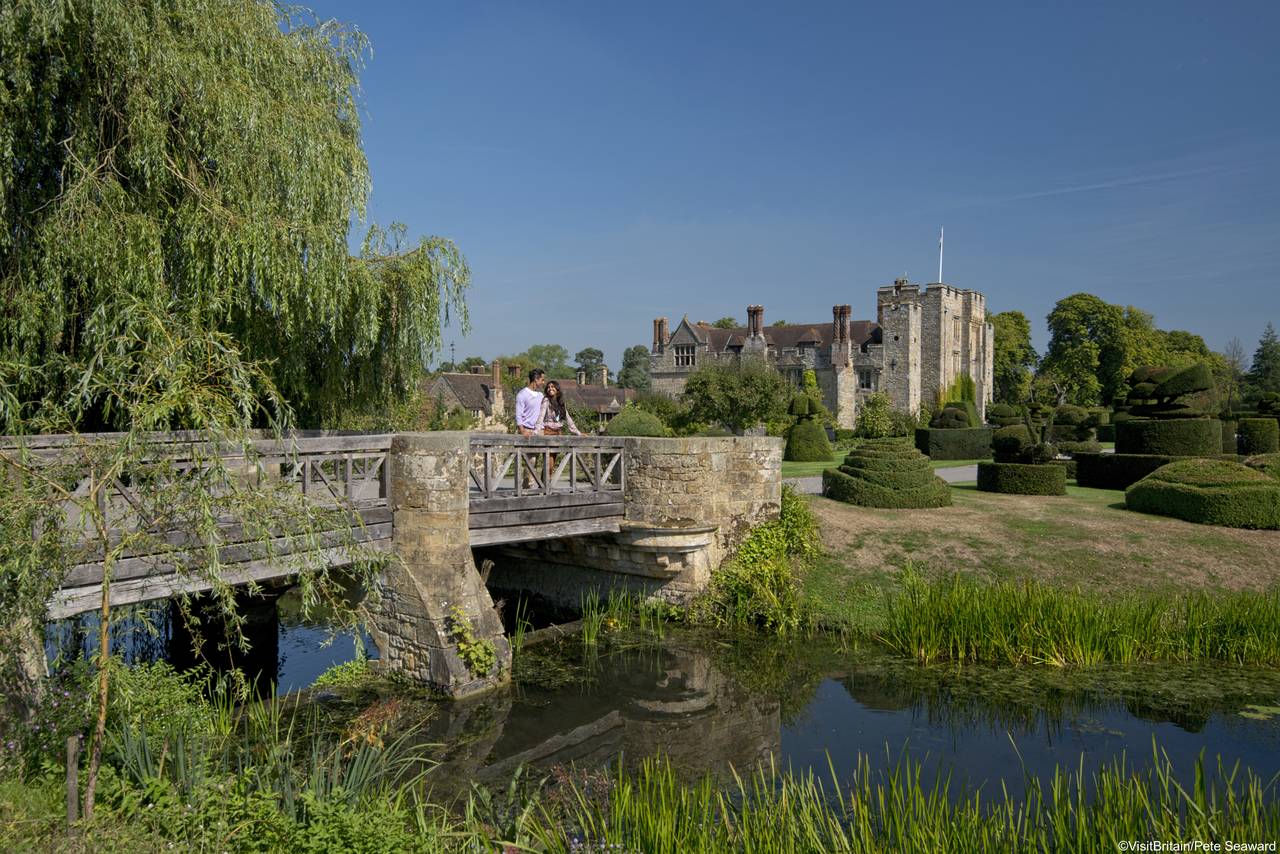 England is famous for its ancient castles and some have become famous themselves. Sometimes their fame comes from their royal residents, such as Windsor Castle. Other times you may recognise them from the silver screen. Indeed Highclere featured in Downton Abbey and Alnwick Castle was the site where Harry Potter learned his wizarding skills and flying a broom.

However you know them there’s something magical about seeing these majestic architectural beauties the autumnal months when the leaves begin to fall and the countryside becomes a burnished carpet of reds, golds and yellows. You just know that with millennia of English history behind each turret or wall there will be a myriad of tantalising tales and royal gossip.

Windsor Castle and its park

Just to the west of London lies the world’s oldest and largest inhabited castle, having been a royal residence for around 950 years. First developed by William the Conqueror in the 11th century, Windsor Castle is regularly used by the Queen as a weekend retreat, as well as hosting state occasions and royal weddings.

The Round Tower dominates the skyline and sits atop the oldest part of the castle while St George’s Chapel acts as the spiritual home of the Order of the Garter – an order of chivalry dating back to the reign of Edward III in 1348. 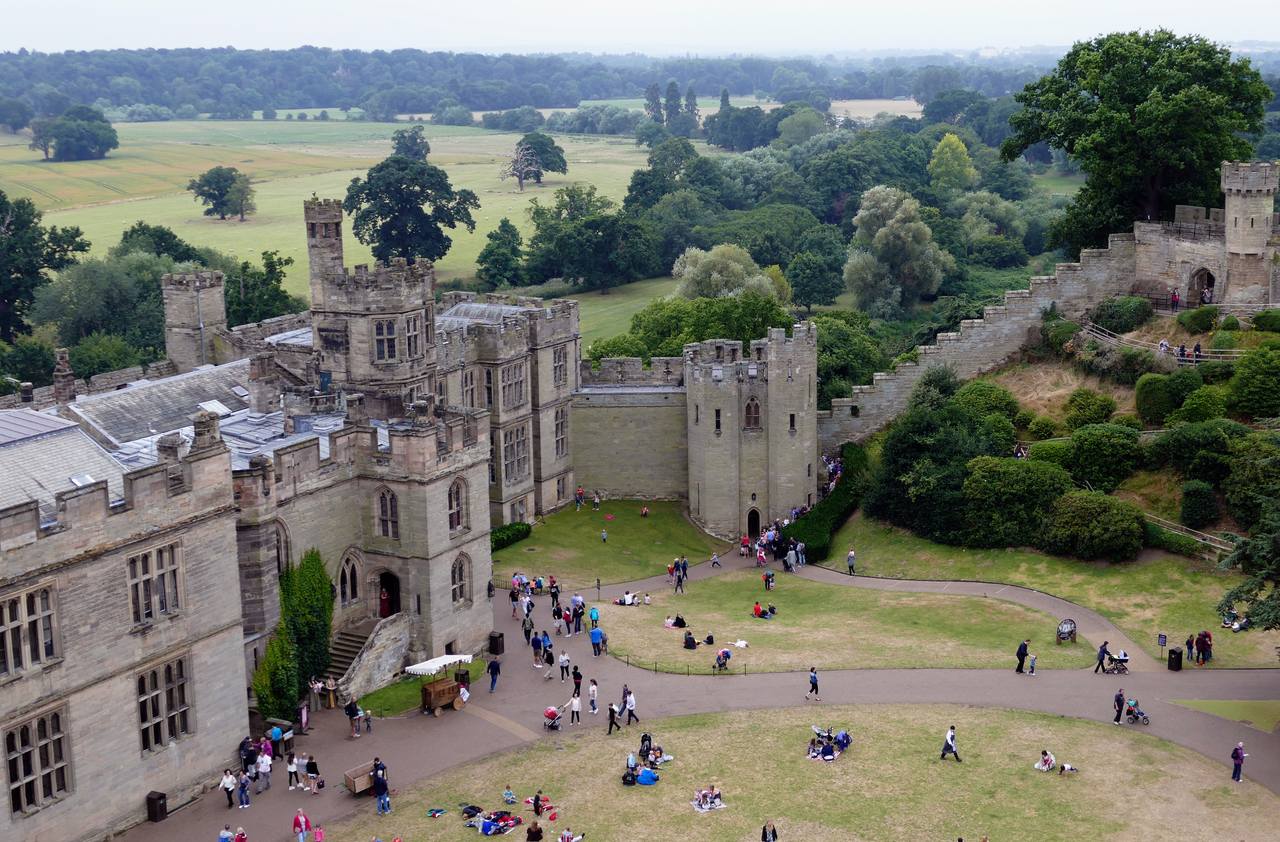 An imposing fortress in the heart of the Midlands, Warwick Castle provides a taste of medieval English life. Pass beneath the castle’s impressive portcullis, wander along its ramparts, take in archery exhibitions and explore 64 acres of landscaped gardens on the way to discovering 1,100 years of history. Children can venture back through time in the Horrible Histories Maze, or book into the Castle Dungeon to unravel some of Warwick’s darkest secrets with the help of live actors and spine-tingling special effects.

Top pick stay: The city-centre luxurious The Globe comes with a restaurant and bar and just five minutes walk from the Warwick Castle. 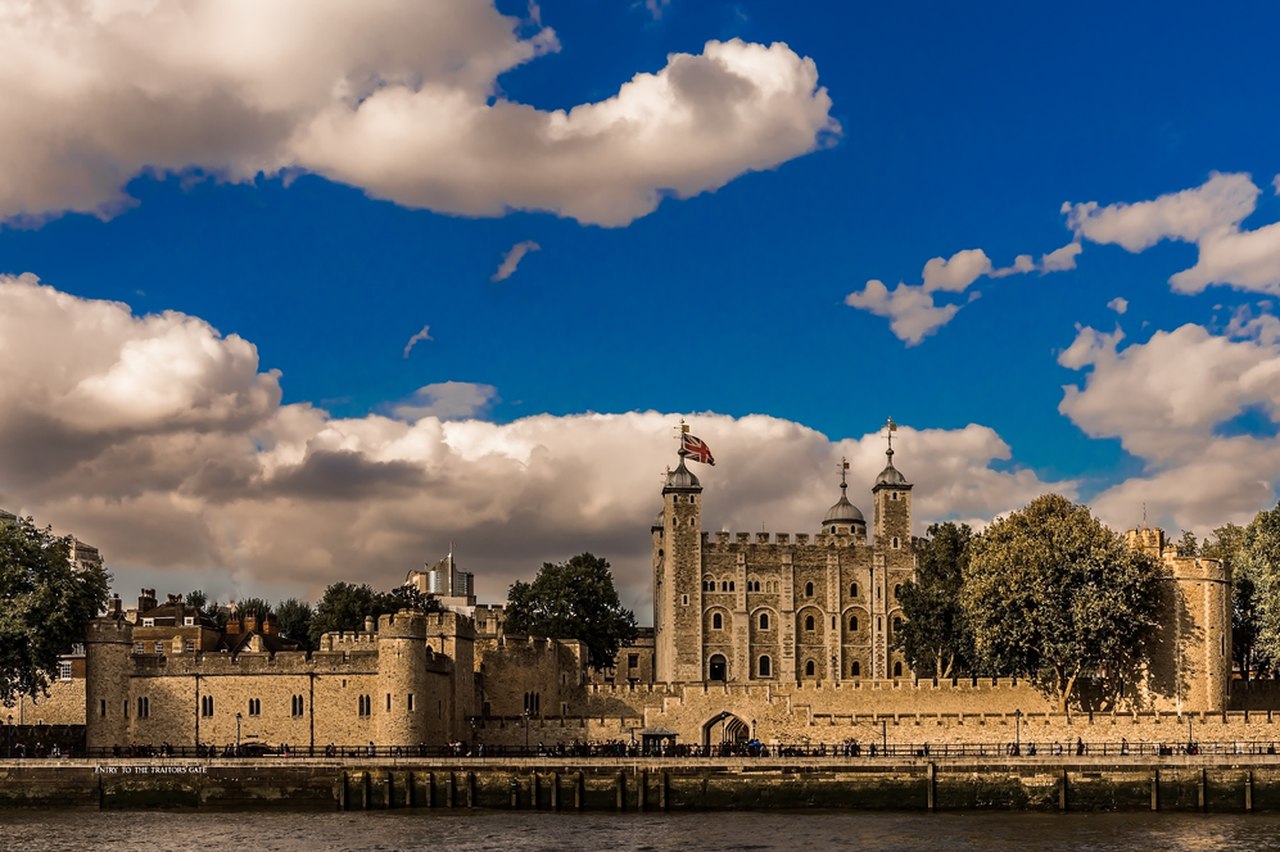 Tower of London – home to the crown jewels

Once a royal residence and notorious prison, the Tower of London is a World Heritage Site with 1,000 years of history. The imposing fortress is now home to the Crown Jewels, a collection of more than 23,000 dazzling gemstones, while visitors can meet the guardians of the tower – its legendary ravens!

Learn more about this feast of Norman architecture from the Yeoman Warders, often known as Beefeaters, who have guarded the tower since Tudor times. 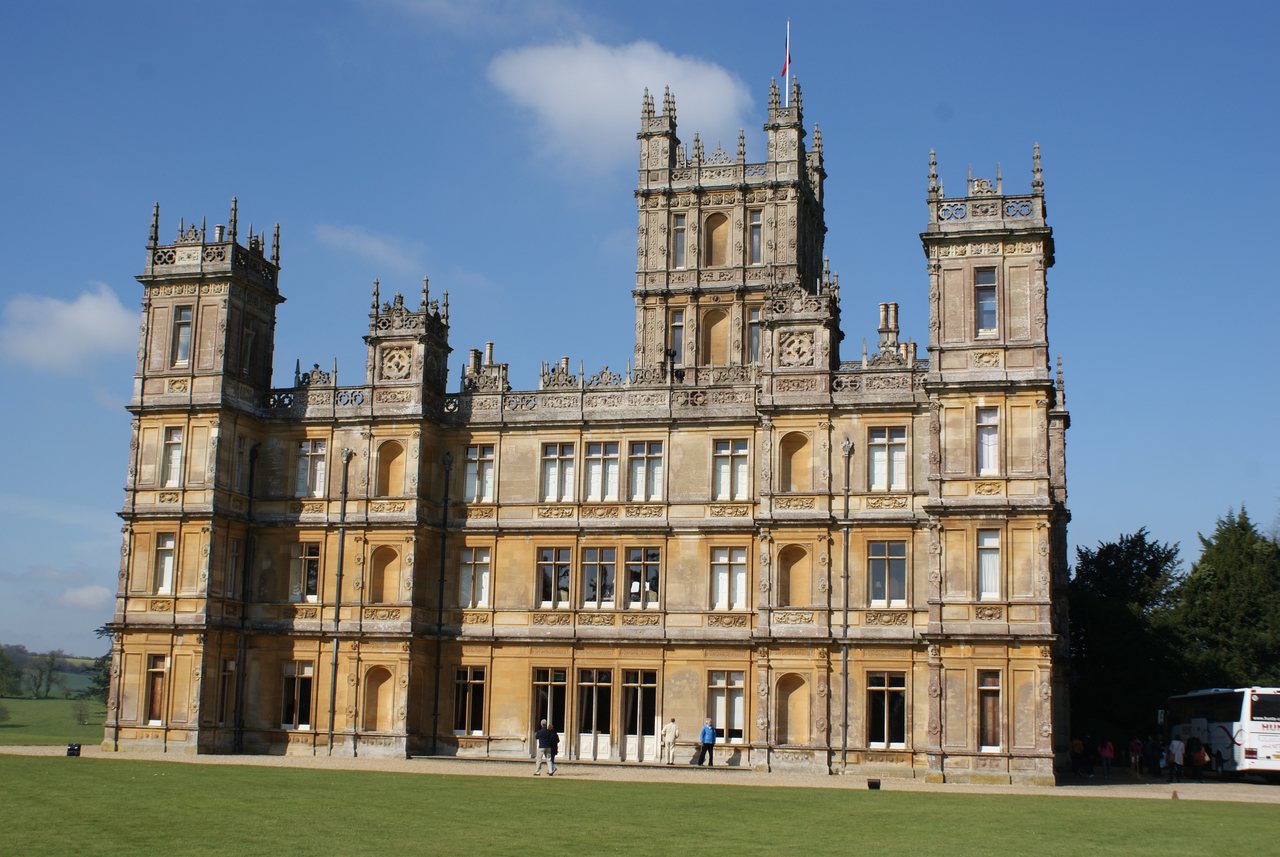 One of the stars of TV’s Downton Abbey, Highclere Castle in Hampshire provided the backdrop for four series of the show and the hit movie. Initially a medieval palace, Highclere was transformed in the mid-19th century by Sir Charles Barry, the architectural mind behind the Houses of Parliament in London.

Alongside tours of its many rooms, including those used as the staterooms from the Downton Abbey movie, visitors can explore gardens dating back to the 13th century and 1,000 acres of stunning parkland, designed by the renowned landscape gardener, Capability Brown. The castle is home to the Earl and Countess of Carnarvon, whose family have lived there since 1679, and also houses a unique display of Egyptian antiquities celebrating the 5th Earl of Carnarvon’s role in the discovery of the tomb of Tutankhamun. This year, the castle will also hosts special autumn and winter tours, including Real Lives and Film Sets and Christmas at Highclere.

Top pick to stay: The Pheasant is a traditional country inn famed for its seafood restaurant. It’s just a short drive from the castle.

With a history spanning more than 700 years, Hever Castle was the childhood home of Henry VIII’s second wife, Anne Boleyn. Initially a moated defensive castle dating back to 1270, this romantic setting is packed full of Tudor portraits and tapestries, and features fine views out over Hever Lake.

Set within the 125 acres of grounds is a 100-year-old Yew Maze, as well as award-winning gardens, with startlingly beautiful dahlia displays and the warming sugary scent of the Katsura tree perfuming the frosty air. Pre-booking to explore Hever Castle and its grounds is essential.

Top pick to stay: The luxury Hever Castle B&B in 125 acres of formal gardens in this 13th-century double-moated castle. Access via the private gated entrance. 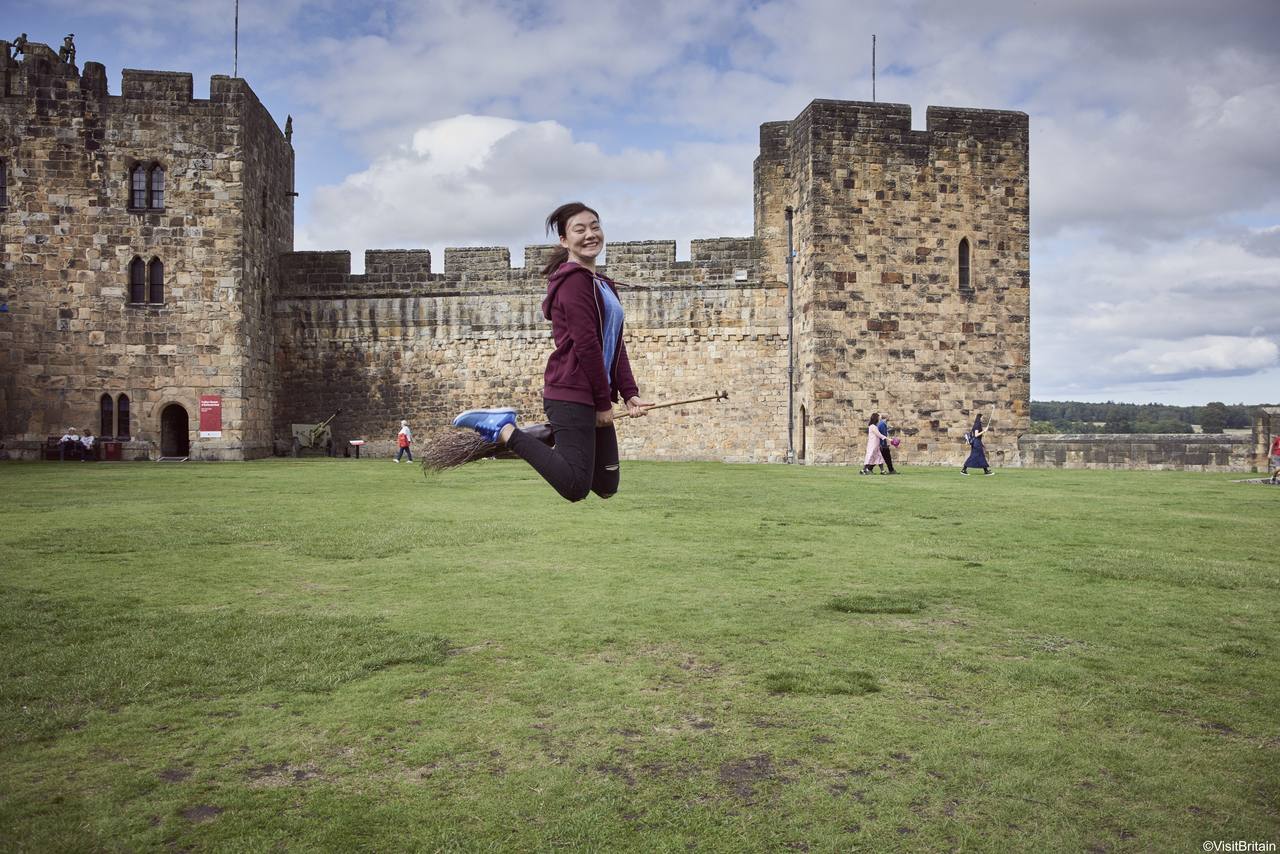 Young woman hovering on a broomstick in the Outer Bailey of Alnwick Castle, Northumberland.

The impressive Alnwick Castle was home to the Duke of Northumberland’s family, the Percys, for over 700 years and in its time has acted as a military outpost, a teaching college and a family home over the centuries. Another castle with its origins in the Norman period, the fortress in Northumberland where Harry Potter, the wizarding hero was filmed learning to fly a broomstick within its walls for Harry Potter and the Philosopher’s Stone.

The castle is no stranger to the world of film, having also featured in Downton Abbey, Robin Hood Prince of Thieves and Elizabeth.

Top pick to stay: The pet-friendly Cookie Jar formerly the Convent of Mercy, is just 0.2 miles from the centre of Alnwick and 200 yards from Alnwick Castle. 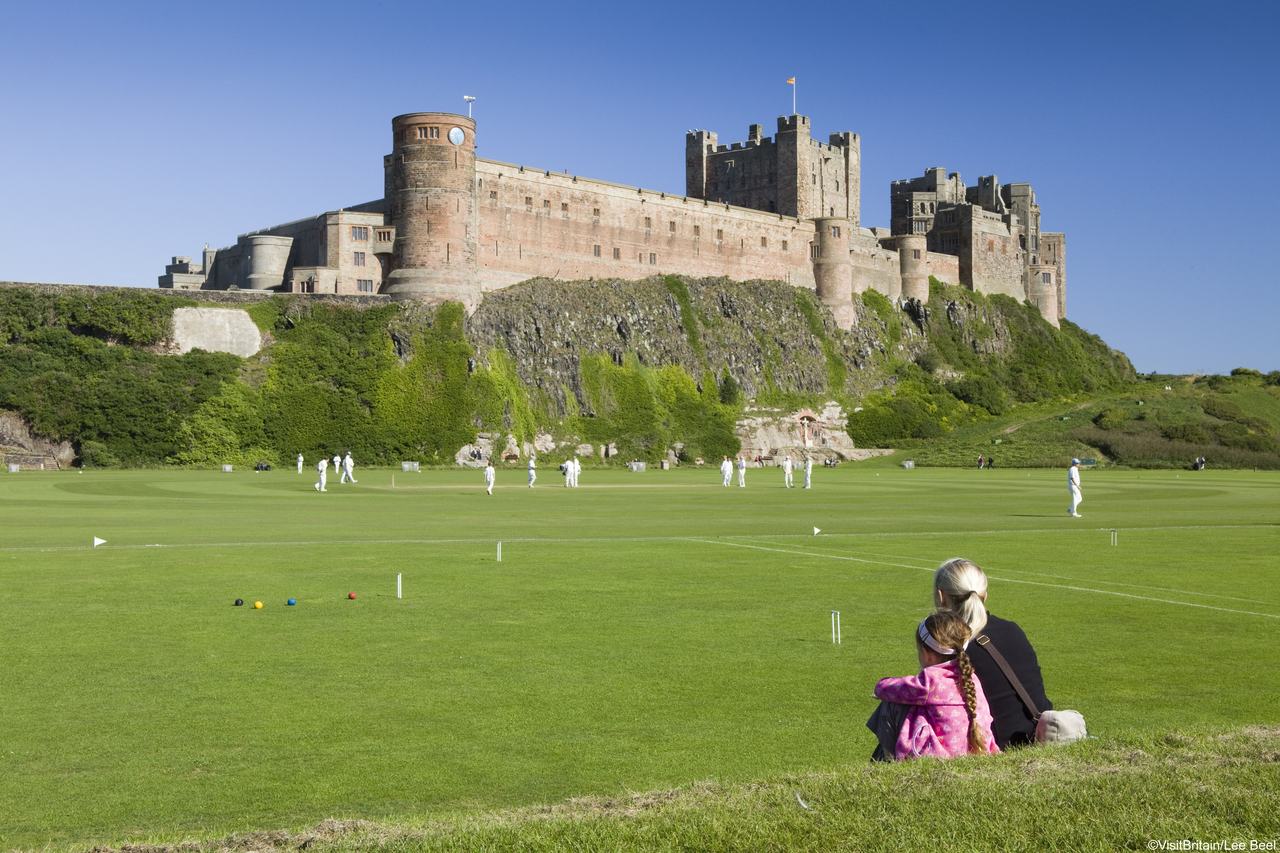 Perched on an outcrop overlooking the Northumberland Coast, Bamburgh Castle started life as an Anglo-Saxon citadel and has a rich and varied history. The mighty keep dates back to just after the Norman invasion, while it acted as a royal palace for numerous kings in the centuries that followed.

Bamburgh holds the distinguished title of being the first castle in the world to fall to gunpowder, having been attacked during the War of the Roses, while a delightful array of artefacts and heirlooms reveal more about its past. Today it stands as the family home of the Armstrong family, descendants of Victorian engineer William Armstrong, who purchased the castle to return it to its former glory. Purchasing pre-booked advance tickets online is recommended.

Top pick to stay: The Victoria Hotel has a great location and a cosy brasserie. 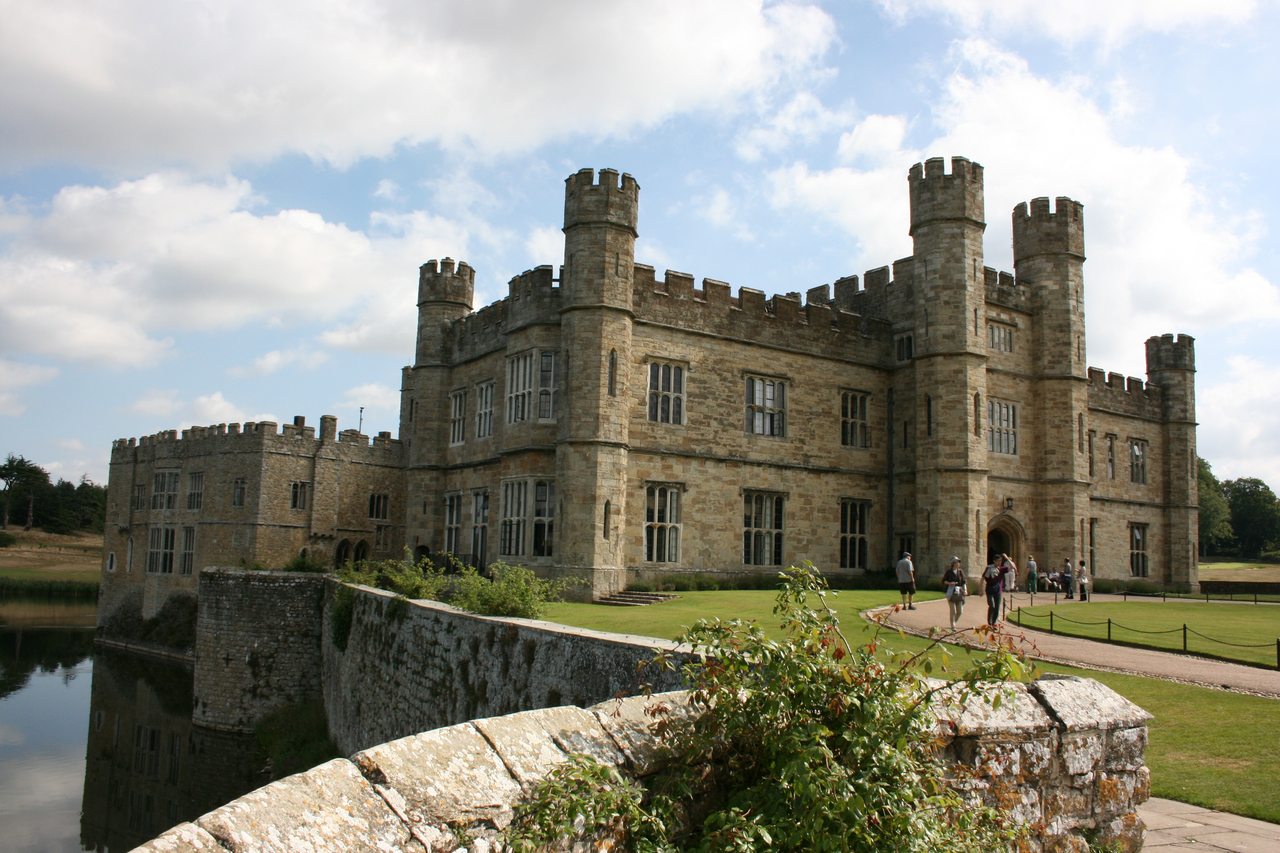 Although the name suggests this lovely castle should be in Yorkshire, Leeds castle spreads over 500 acres in the heart of the Kent countryside. This ancient castle celebrated its 900th anniversary in 2019.

Visitors can trace its journey from its Norman roots, through royal ownership and its time as a magnificent Tudor place for Henry VIII, to the country retreat that stands today. The Gatehouse Exhibition explores this history, while the castle’s Bird of Prey Centre features displays from hawks, owls and eagles, among other majestic birds.