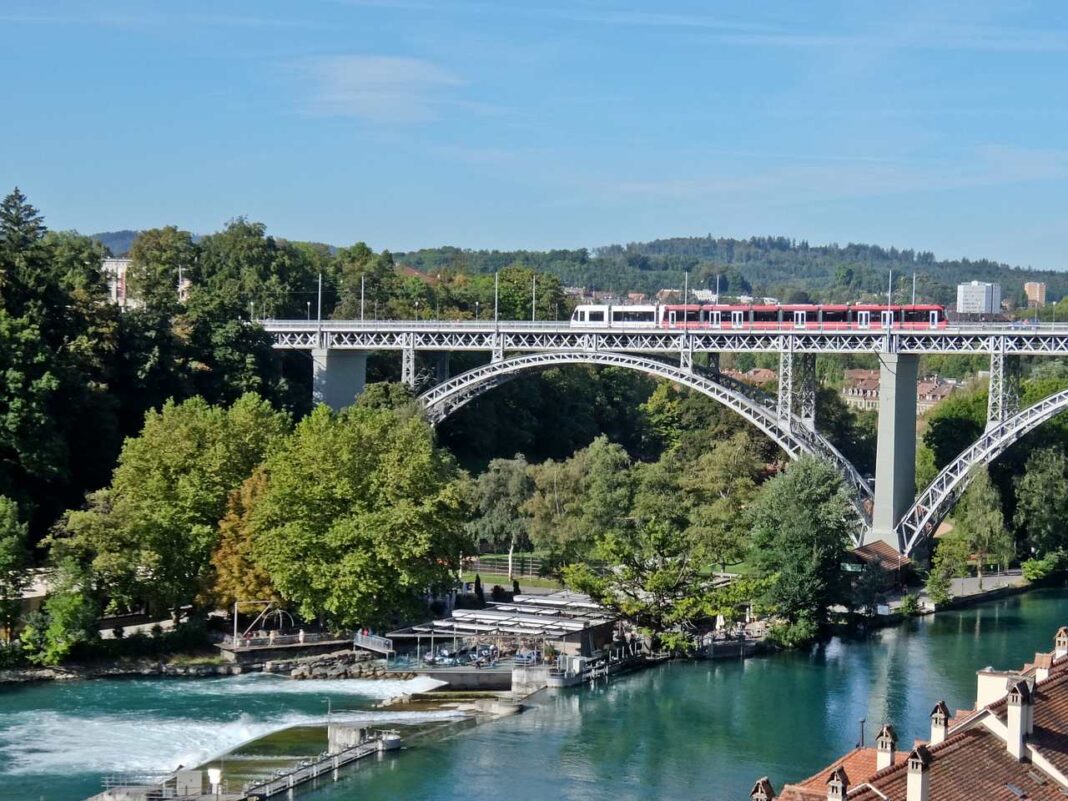 Bern’s old town is UNESCO protected and the layout of its wide streets goes back to medieval times. It was founded in the 12th century on high ground, circled by a tight U-bend of the River Aare, making it easy to defend.

The story goes that Berthold V, Duke of Zähringen declared that he would name his new settlement after the first animal he found hunting in the forest. It was a bear, (Bären in German), and they’re now housed in humane conditions in a special park.

The city is tiny and it’s easy to wander around on foot. The Zytglogge, or clock tower, was built early in the 13th century as Bern’s Western gate and subsequently enlarged. It houses the bells and an astronomical clock with a mechanism manufactured on site, between 1527 and 1530, by Casper Brunner. It’s still going strong and you can climb up inside and watch the complex whirring of cogs and gears as it strikes the hour.

Time was also important for Albert Einstein who lived just down the street for two years when he worked at the Patent Office. The apartment, where he developed his Special Theory of Relativity, has been restored and furnished in period style and is open to visitors.

Floating down the River Aare

In summer, Bern residents keep cool by plunging into the River Aare, often carrying their clothes and shoes in a special waterproof bag. The current carries them downriver to the Marzili. This complex of open-air pools and lawns, just below the Swiss Parliament Building, is perfect for an active lunch break.

I leave my clothes in a locker here and walk upriver for around a kilometre before holding my breath and jumping in. Temperature is around 20C so it’s not too cold, but after 15 minutes I’m ready to get out. As well as steps and handrails there’s a special channel leading from the river to the safety of the outdoor pool. This sounds more difficult than it actually is, but you do need to be a confident swimmer.

There are also strict safety rules – no alcohol or drugs, leave your airbeds behind and don’t dive into the cloudy water. There are also times when there’s heavy rain in the mountains and the river becomes a murky torrent, concealing floating pieces of wood. Mercifully today the water is crystal clear and the sun is shining. It’s a fantastic experience, one I can heartily recommend.

It’s worth taking the funicular up to Gurten, known as Bern’s mountain, although it’s only a small hill rising to 858m. A network of running, cycling and walking trails caters for Bern fitness fanatics. On a clear day, the city is laid out in front of you, with the sparkling Aare River running through the centre, and there are views across to the snowy peaks of the Bernese Oberland.

If you’re interested in the history of the mountains, the Swiss Alpine Museum (ALPS) tackles current mountain issues from all over the world in an unconventional way, with a series of temporary exhibitions. I liked the Memories Lost and Found which has a collection of skiing gear over the ages. The Alpine Workshop highlights mountain crafts including violin making and weaving. In the shingle workshop, you can get up close to the wood and practise your skills.

For those craving the real outdoors, a short train ride takes you out to the town of Schwarzenburg, the gateway to the Gantrisch Nature Park and the mountains of the same name. If you’re not feeling confident enough to tackle those, then anyone can access the Gäggersteg, a unique wooden jetty in the middle of the forest reserve. There’s a circular family walk here but a longer path leads to the Berghaus Gurnigel, part of the Gantrisch Panorama Trail. When it’s clear, night hikes offer magnificent star gazing, although tonight it’s overcast so I stay inside the warm chalet.

FLY: SWISS offers weekly flights from the UK to Zurich and Geneva. One way fares start from £80. From Zurich airport it’s a train journey to Berne on the Swiss Travel System network with a Swiss Travel Pass offering unlimited travel for £186 for 3 days in second class.

STAY:
Best Western Plus Hotel Bern**** makes a comfortable base in the city centre.
Berghaus Gurnigel is a good base for hiking in the Gantrisch Nature Park.

EAT AND DRINK:
The Aarebar Bern is a pop-up bar by the river, perfect for after-swim cocktails.
Restaurant Altes Tramdepot is next to Bear Park and brews its own beer.
Restaurant Dampfzentrale serves modern Mediterranean cuisine on a terrace overlooking the Aare River.
Restaurant Gurtners serves tasty food in Gurten with a great view of the city.
Restaurant Bären, Schwarzenburg has hearty food in the Gantrisch Nature Park.