Hiking the Essex Coast from Tollesbury to Purfleet

A week’s hike, close to the sea, from Tollesbury, near Colchester to the Thames at Tilbury. 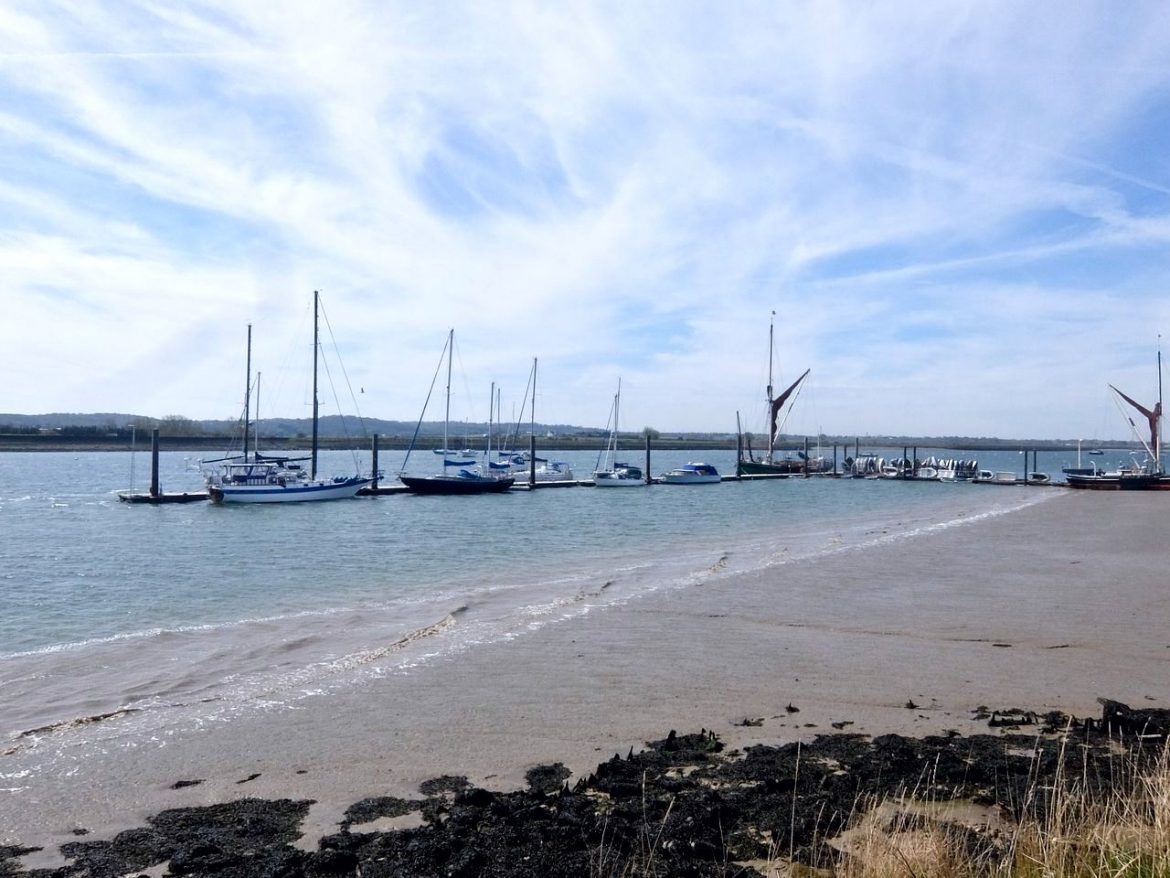 Essex is known for a lot of things, but its coast isn’t one of them. That’s a pity as it’s home to a varied birdlife and one section is the most isolated spot in the country.

Of course, there are the obligatory caravan parks but they’re mainly clustered around the towns and what lies between is wild and unspoilt. It’s also the setting for a new Apple TV+ series, The Essex Serpent.

Also read: Why Mersea Island in Essex is the perfect place to relax in a caravan

This long-distance hike starts on the Saltmarsh Coast Trail in Tollesbury, mainly following the sea wall, and goes south all the way to the Thames. It crosses three rivers, the Blackwater, the Crouch and the Roach, before arriving in Southend and then carries on past Canvey Island to Tilbury on the Thames.

It’s overcast but dry as I take a taxi from Witham, which drops me at Tollesbury Marina. The tide’s out, the boats are resting on the mud and there’s nobody around. I walk on the seawall around Tollesbury Wick, an area designated as a nature reserve, with Mersea Island opposite. In the distance is Bradwell Nuclear Power Station, somewhere I’ll pass tomorrow.

The birdlife is abundant, with lots of waders, and the only people I see are a couple collecting shellfish in the shallows. There’s nothing else for another three hours before I reach the caravan parks, just outside Maldon. Suddenly there are dog walkers, pubs with drinkers outside, but it’s still a long way around numerous inlets before I reach Maldon.

My accommodation is at the top of the only hill for miles, and I’m relieved to discard my boots and soak my feet in a hot bath.

After yesterday’s interminable inlets, rather than face more of the same, I decide to cheat and take the bus. It drops me off at St Lawrence, another caravan haven, and I set off along the seawall. It’s sunny with a gentle breeze, and there are many sea birds feeding in the water. I soon arrive at Bradwell Marina, chock full of boats and there’s even a pub, but I don’t linger.

The nuclear power station looms ahead, long decommissioned. although there are plans to restart.  I can see the village of West Mersea, close across the channel, and nearer, at water’s edge, are sunken barges, and improvised sea defences.

Ruined pillboxes are dotted along the shore, once a protection against German invasion. I pass long shell beaches with the occasional seated fishermen. Soon I’ved turned the corner and arrive at the Othona community where I’ll be spending the night. 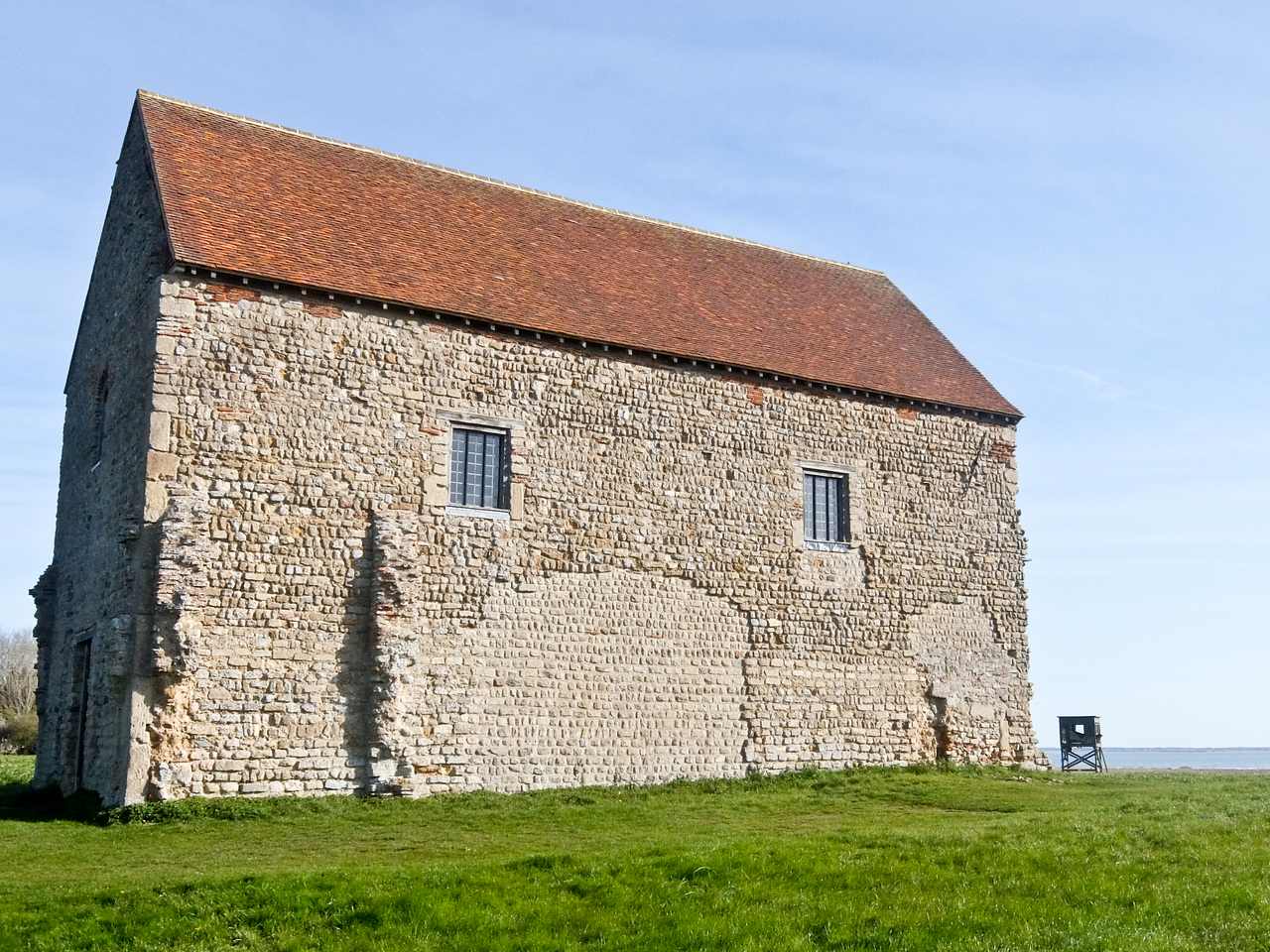 St Peter on the Wall

Before I set out, I take a quick look at the chapel of St Peter on the Wall, one of the oldest intact churches in England, dating from the 7th century. It’s a beautiful morning, the dew heavy on the sea wall, soaking my boots.  There are more beached barges and, although I’m walking through one of the bleakest spots in the UK, all the land is cultivated with small farms in the distance.  What’s certain, though is that there are no people and no dwellings.

After facing the open sea for a handful of miles, I reach the Crouch estuary and turn upriver. During WW2 this was thought a potential invasion route and the seawall is lined with pillboxes including a massive fortification just slightly inland. In the middle of the estuary is Foulness, the fourth-largest island in the UK.

It’s still used as a firing range by the military and loud bangs disturb the silence. As I near Burnham on Crouch, the yachts are out in force in the channel. It’s a delightful place, so I stop for an ice cream on the seafront.

After three days of walking, I decide to take it easy and just walk upriver to the pub in North Fambridge. I leave Burnham’s Yacht Marina, still following the sea wall, past the tiny hamlet of Creeksea.

There’s nothing much else until the sea wall suddenly disappears and I’m directed inland and start to climb. Locals know this as ‘The Cliff’ and suddenly the landscape opens up in front of me.

It’s only a minor undulation and I’m soon back on the flat on the sea wall. I pass the marina at Althorne before reaching the excellent Ferry Boat Inn at North Fambridge. The ferry is long gone but they’re still providing excellent beer and food.  It’s so good that I linger too long and end up taking the train back to Burnham. 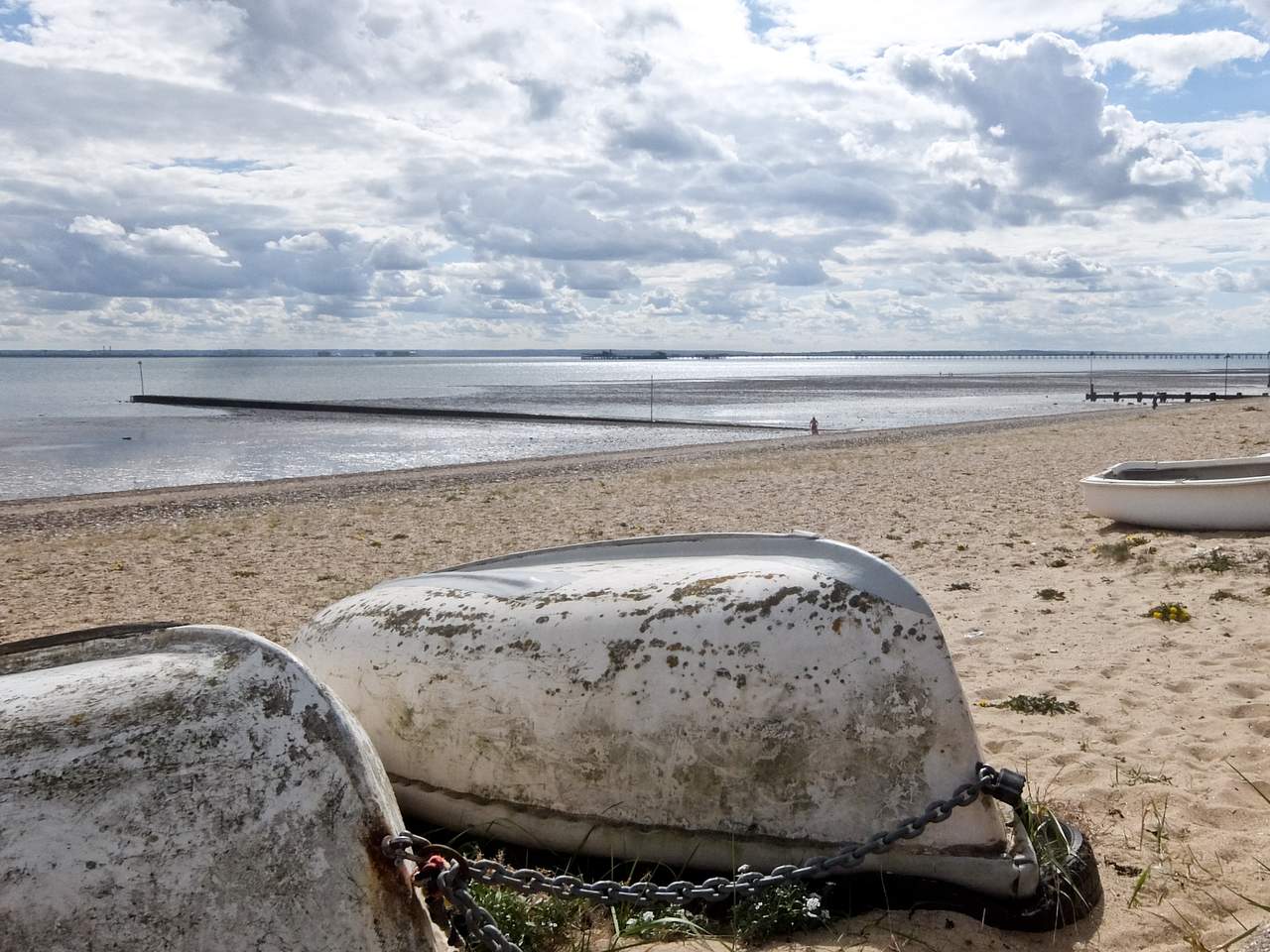 Today, I’m bound for Southend and I start by phoning the ferry, just a one-man small inflatable, to take me across the Crouch to Wallasea Island. Over three million tons of earth from the Crossrail excavations were dumped here to create a wildlife habitat under the protection of the RSPB. Arable farmland has been converted to saltmarsh, mudflats, lagoons and grazing marsh but I’ve no time to linger.

I head inland through the Paglesham hamlets of Churchend and Eastend, across huge fields of grain, to end up once again on the seawall by my third river. This is the Roach and I follow its banks to the crossing place at Rochford. I’m now on the outskirts of Southend and, rather than tramp through urban streets, I take the bus to the centre. It’s then a pleasant walk along the prom, past the famous pier, to my B&B in Thorpe Bay.

Rather than trudge into the centre, I take the bus to Leigh on Sea. This is the start of the Thames Estuary path which will take me all the way to Tilbury. It mostly runs parallel to the railway line, with stations dotted throughout, so it’s easy to do day walks, just tackling short sections.

I follow Hadleigh Ray riverbank, with Hadleigh Castle above me and Two Tree Island to my left, to South Benfleet and then inland to Pitsea.

From here it’s all cross country, past Vange Marsh, then through Fobbing Marsh Nature Reserve. I get my first view of the Thames at Stanford Warren nature reserve, flooded gravel pits with reed beds full of birds. From here it’s a short walk to Stanford Le Hope.

From Stanford, I follow the railway line before entering Thurrock Thameside Nature Park. Once a landfill site, it’s been reclaimed by nature and contains a huge lake, excellent for bird watching.

At East Tilbury, I finally reach the Thames, with the impressive 19th century Coalhouse Fort, guarding the river. Originally built to protect London from the French, it was repurposed in WW2.

The seawall follows the curve of the river to the 17th century Tilbury Fort now fully restored. Henry VIII built the first defences here and Queen Elizabeth famously rallied her army nearby to face the threat of the Armada. These days the Armada has been replaced by massive cruise ships which dock nearby, next to the Gravesend ferry.

I press onwards to Grays, not the most inspiring place, but I’m soon back at the Thames, stopping for fish and chips at a riverside pub.

Huge oil tankers and container ships ply this stretch of the river and the sea wall has been transformed into a gallery of graffiti. Passing underneath the Dartford Crossing Bridge, I arrive at Purfleet, my final destination, and get the train home.

Info: Visit Essex has information about the county.

The Saltmarsh Coast has information about the trail.

Explore the Thames Estuary Path has maps and a detailed guide.

Stay: Luigi’s Al Fresco is a comfortable place to stay in Maldon and has good Italian cuisine.

Thatched Cottages in Burnham on Crouch are a couple of atmospheric, immaculate restored, historic dwellings.

Suenos Guesthouse in Southend has sea views and 5* accommodation.

Top 5 places in the world to swim with horses