They call it Jerusalem of gold, but these days it is green too.

I visited Jerusalem way back in 2016 and it captured my heart then and has done so again in 2022 even more so as it’s changed. In the last couple of years, the city has upped its green credentials. They took the opportunity, when Covid struck, to descend on its empty streets and roll out the plan for accessibility and sustainability. And to great effect.

Ugly pipes and bins that previously insulted the gorgeous twisty lanes of the colourful suq and residential areas, have disappeared into the ecology of the now pristine streets. Undergrown sewage has been upgraded and there is a daily clean-up, litter is frowned upon by everyone. There is no distraction from its beautiful limestone architecture that literally shines in the sunshine. It’s a joy to witness the way market traders and the locals that live on the side street of the suq take pride.

There are even discrete toilet facilities, more signs everywhere and four small privately-owned club cars – similar to golf carts – that you can hail as a  taxi within the old city limits just making the experience a lot easier.

Away from the old city – the modern city that surrounds the old city – there are 70 neighbourhoods in the wider city that have invested in gardens that have sometimes risen from the midst of a dump to beautify their neighbourhood and give them somewhere to chill outdoors while ancient trees are being pampered into health and longevity. Everyone is on board the initiative. 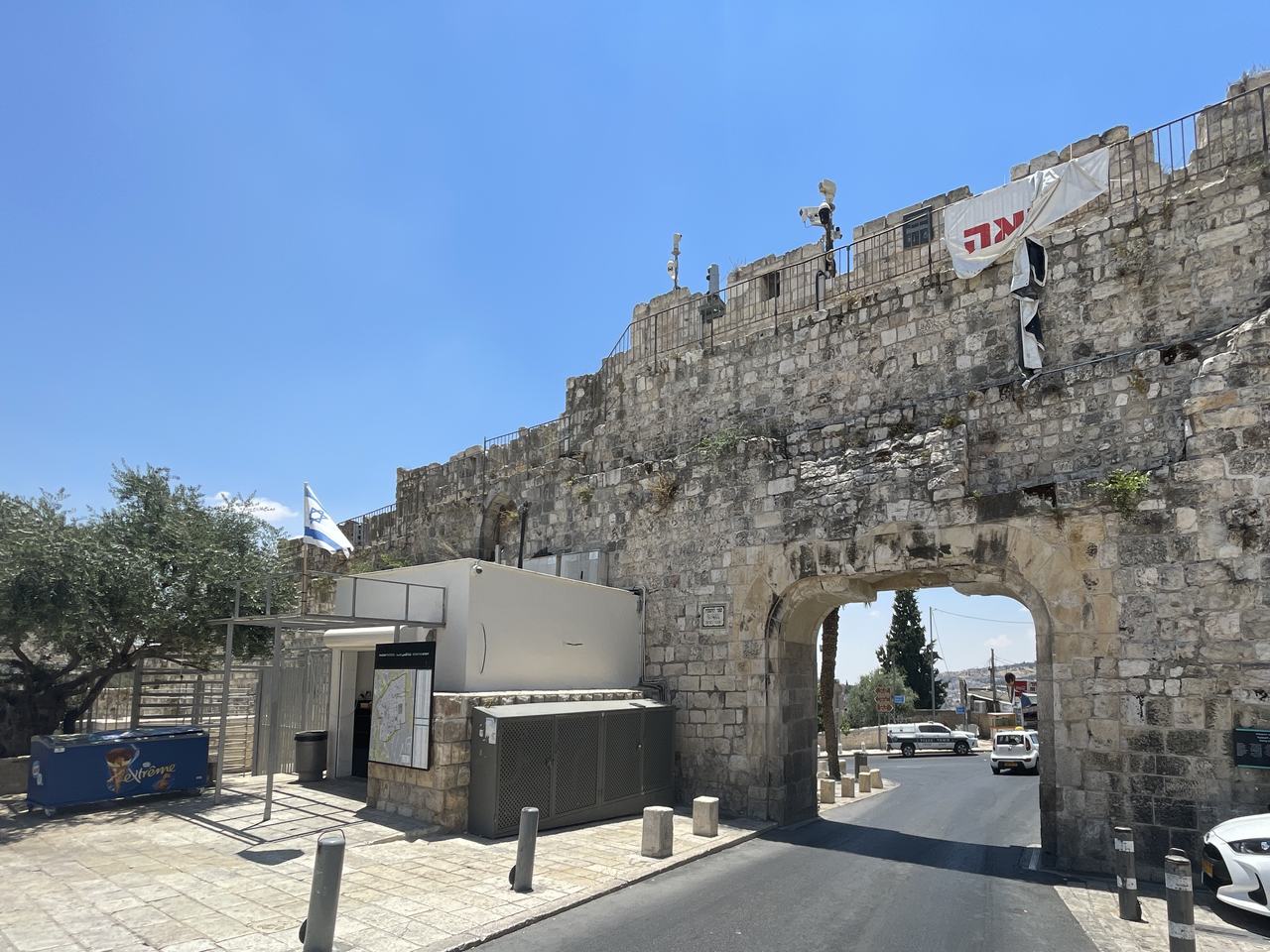 The Four Quarters of the Old City of Jerusalem 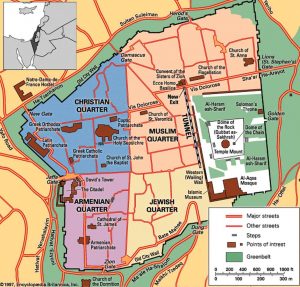 We entered the old city via the amusingly named Dung Gate in the Jewish Quarter, one of seven that gives access to the city. Built by the Ottomans in the 16th century this was where the locals dumped their refuse so that the winds of the day would carry odours away.

For us, the Dung Gate offered the most direct route to the Dome of the Rock and Wailing Wall located in the Jewish Quarter, our first stop.

Dome of the Rock and the Wailing (Western) Wall 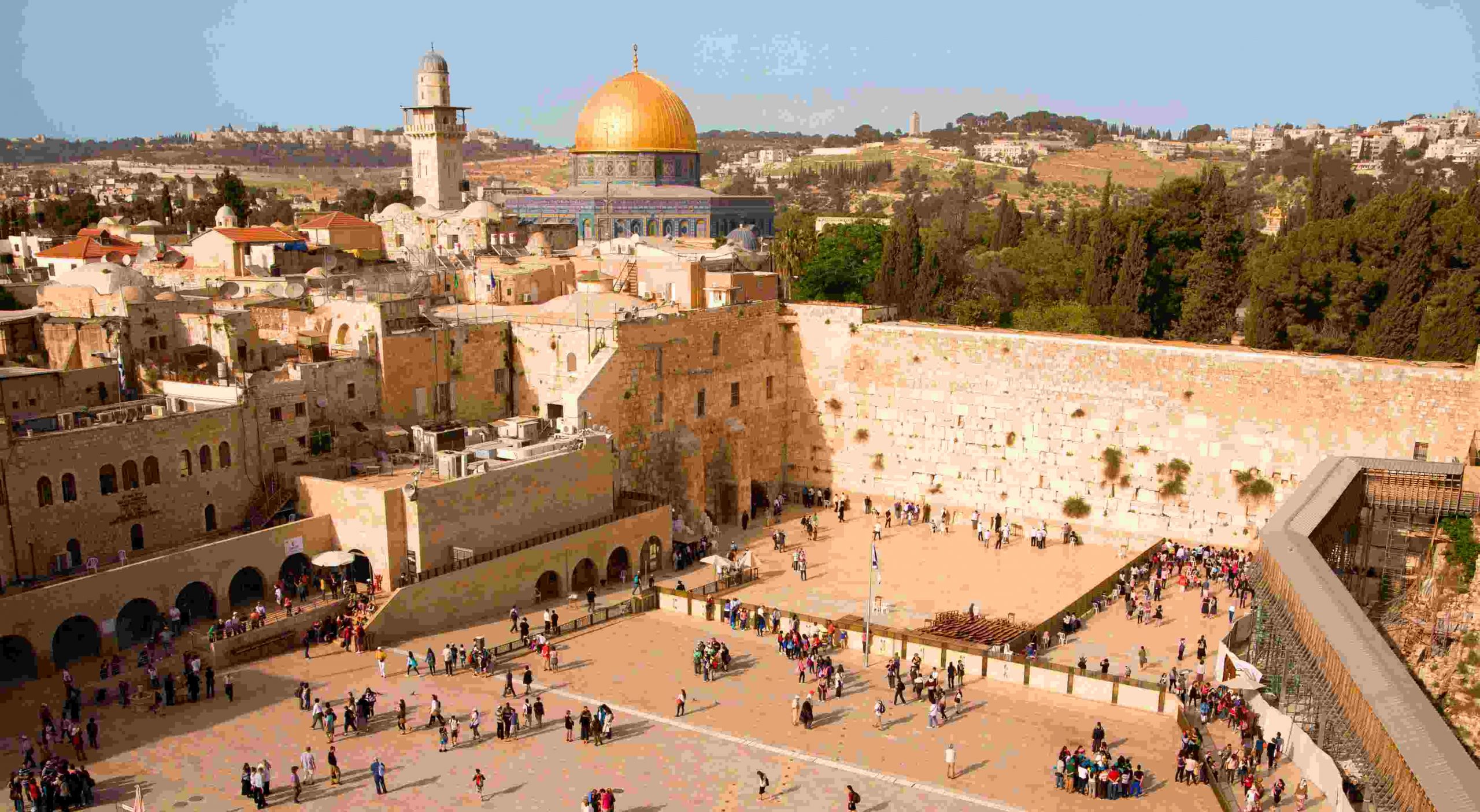 Wailing Wall and Dome of the Rock

There are plenty of destinations in this tiny city to focus on, but in my opinion, the two most evocative are The Dome of the Rock aka the Al Aqsa compound located on Temple Mount and the Wailing Wall both of which are accessible to wheelchair users.

The Dome of the Rock is located on the former site of the second Jewish Temple (c. 516 BCE) and in the Jewish Quarter. Part of that temple, the Wailing Wall, a single wall, still exists right by it and remains dear to the hearts of the Jews.

You can’t visit the Dome of the Rock mosque as this is the preserve of Muslims. Noone can, not even the local Jews and Christians. You can visit the Temple Mount complex and admire the golden dome and the fabulous mosaics on its exterior walls.

Anyone can pray at the Wailing Wall. Men and women are separated into their own sections each with their own prayers, many writing their wishes on a piece of paper and interesting it into a crack of the wall. If you get there on a Thursday you will be able to see dozens of Bar Mitzvah boys going through the traditional transition ceremony from 13-year old boy and emerging as a man.

For the first time ever the Via Dolorosa, a massive draw for pilgrims and tourists, is accessible to people with wheelchairs and prams thanks to accessibility ramps.

Now, no-one is excluded from crossing over the half-mile-long winding Via Dolorosa route passing nine of the 14 stations where Jesus walked over the cobbled stones wearing a crown of thorns to the place of crucifixion in the Church of the Holy Sepulchre.

It starts at the Lions’ Gate (St. Stephen’s Gate) by Antonia Fotress in the Muslim Quarter and ends at the Church of the Holy Sepulchre in the Christian Quarter where the remaining 5 stations reside along with the stone upon which Jesus lay. Faithfuls come to touch, kiss or stroke the stone in the hope of gaining spiritual insight.

Jerusalem is home to the Israeli Parliament (Knesset) and Supreme Court what lords it over the city is Chords bridge or Bridge of Strings, with its needle that pierces the sky. Many admire its beauty, its 188-metre mast with 66 cables symbolising King David’s harp; or is it a bow and arrow?

It was designed by the Spanish architect Santiago Calatrava. It is to be used by the Jerusalem new Light Rail’s Red Line (due to roll out in November 2022) and it has become the main modern iconic symbol and structure of East Jerusalem.

Jerusalem sits atop a hill but to discover the stomping ground of Kind David, King Solomon and other biblical characters means going lower down the hill to the City of David which in the Arab neighbourhood of Siloam.

In 2004 something special happened. A sewage pipe burst at the bottom of the hill. Plumbers and builders were sent accompanied by archaeologists to ensure nothing of value was disturbed.

Turns out that the bulldozers uncovered a staircase leading to the biblical Pool of Siloam (700BC), an ancient freshwater reservoir the size of two Olympic-sized swimming pools that survived the destruction of the city 2,000 years ago by the Romans.

This is where ancient Jews would gather at the end of the Second Temple period, to dip in the pool to purify themselves and would walk up a road half a mile long all the way to the Temple Mount. The stones that make up the road are original each weighing multiple tonnes. I took a moment to close my eyes and imagine the traders that straddled the road plying their wares to the millions passing through. In those days it was an open-air throughway, but now it’s a tunnel with a new city above it.

They are still excavating but hoping to open this underground road to the public soon.

It’s a fascinating story and you can find out more at the City of David website.

How to get from Ben Gurion airport to Jerusalem

You can pick up a taxi to Jerusalem which takes about an hour or use the high speed train linking Ben Gurion airport to Jerusalem’s new Yitzhak Navon station every 30 minutes taking 34 minutes.

STAY: The 6-bedroom Biazi Book Hotel. Charming and well-located for all the sights.

6 hotels in Florida with amazing rooftop or outdoor pools