Known as the Versailles of Naples, this 18th century palace of the Bourbon Kings of Naples is the largest royal residence in the world. 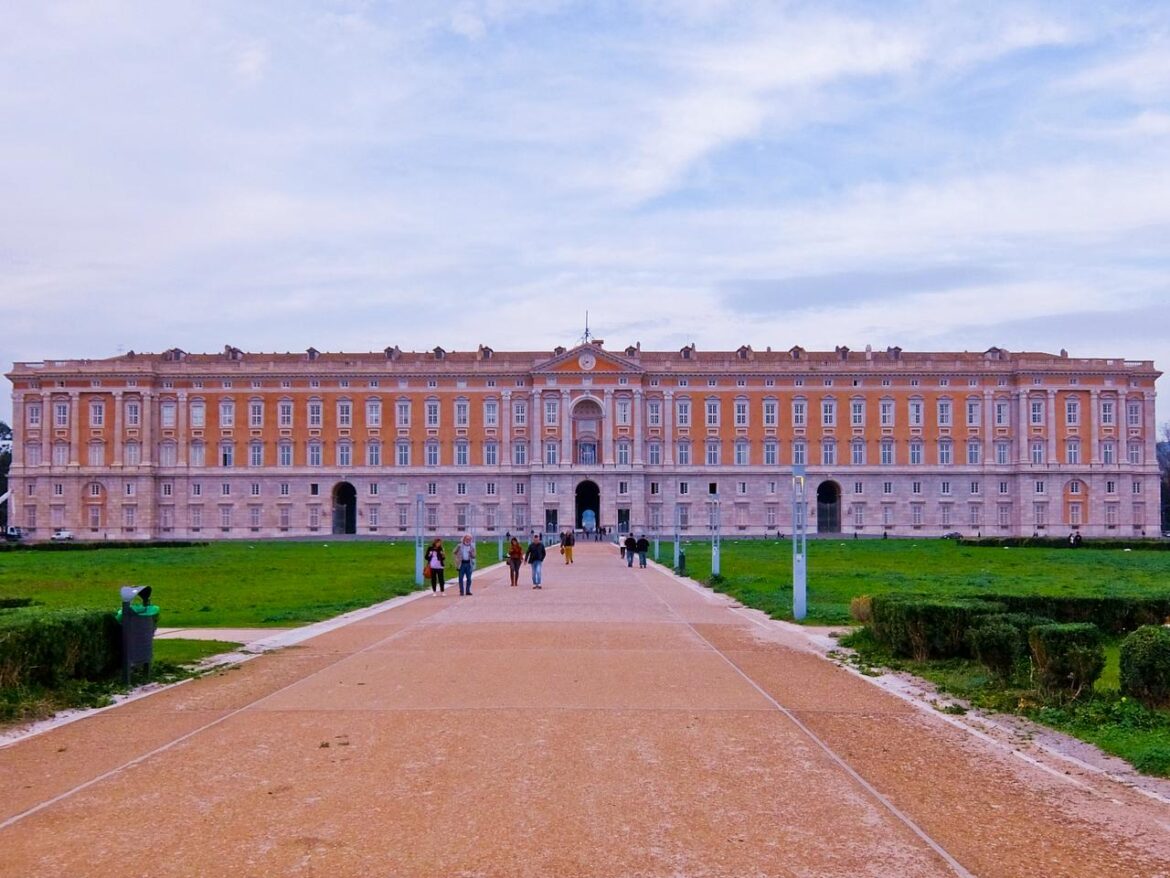 Italy has no shortage of ancient monuments and has 58 sites inscribed on the UNESCO World Heritage list. Naples is a big hitter with its historic centre and Pompeii and Herculaneum fond favourites. With such an embarrassment of riches, it’s no wonder that some of them are overlooked.

To counter this, the Mirabilia Network has been set up to promote the lesser-known Italian UNESCO World Heritage Sites.

Caserta, just outside Naples, hardly features in most guidebooks yet it’s home to the 18th century Reggia de Caserta, known as the Versailles of Naples. The imposing residence of the Bourbon Kings is, in terms of volume, the largest royal residence in the world, covering an area of 47,000 square metres. The palace, park, gardens and wooded area, as well as the Aqueduct Carolino and the industrial complex of San Leucio, built for the production of silk, received UNESCO World Heritage status in 1997.

In 1752, the Bourbon king, Charles VII of Naples decided he wanted a magnificent new royal court and administrative centre for the kingdom in a location protected from sea attack. He, therefore, commissioned Neapolitan architect Luigi Vanvitelli to build a palace bigger than Versailles, 35 km inland from Naples. It was never completely finished but ended up with 1200 rooms, 1790 windows, 34 staircases and five floors. It includes Court Chapel, the Palatine Library, and a theatre modelled after the Teatro San Carlo of Naples.

It’s certainly imposing, even the façade stretches 250m and, at the rear, there’s a massive landscaped park with a 3 km promenade leading 3 km upwards to a waterfall at the top with a fountain of Diana.  On the ground floor, behind the façade there’s a vaulted arcade connecting three waiting areas leading to four internal courtyards, all suitably vast.

A grand staircase leads up to the royal apartments, dating from the end of the 18th century, and early 19th, a marvel of frescoes, tapestries, crystal, stucco and statues.  The style is French Empire but strategically placed among the period furniture are artworks from the Mostra Terrea Motus collection of modern art, commissioned after the earthquake in 1980. At the end of WW2, the palace served as the Allied command headquarters and was the location for the surrender of the German army in 1945. 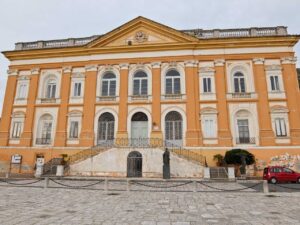 3km north east of the main palace is the smaller summer palace and hunting lodge, built by King Ferdinand I in 1774 from plans left by Luigi Vanvitelli. In 1778 he decided to develop a centre for silk production here, aptly named Ferdinandopoli. Mulberry trees were planted and a silk mill was installed in the palace. The local community were employed to weave the yarn with housing, schooling and medical care provided.

Napoleon temporarily halted production when he invaded in 1799, but a water mill was built behind the palace in 1823 and industrial Jacquard looms were introduced in the 1830’s. Silk is still produced in the area although the palace has now been transformed into a fascinating silk museum, showing all phases of production. A huge water wheel, twisting frames and a Jacquard loom are all that remains of this early experiment in industrial cooperation. 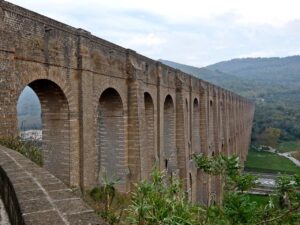 Water for the palaces, gardens and silk centre was brought 38 km from the Taborno hills by the Aqueduct Carolino. Construction began in 1753 and was finished nine years later.

It runs mostly underground but just outside the town, an imposing arched viaduct, “Ponti della Valle” was constructed to span the valley. 529 metres long and 55.8 metres high, it’s modelled on Roman arched aqueducts and rises in three tiers. It’s still in use today, supplying the modern town with drinking water. 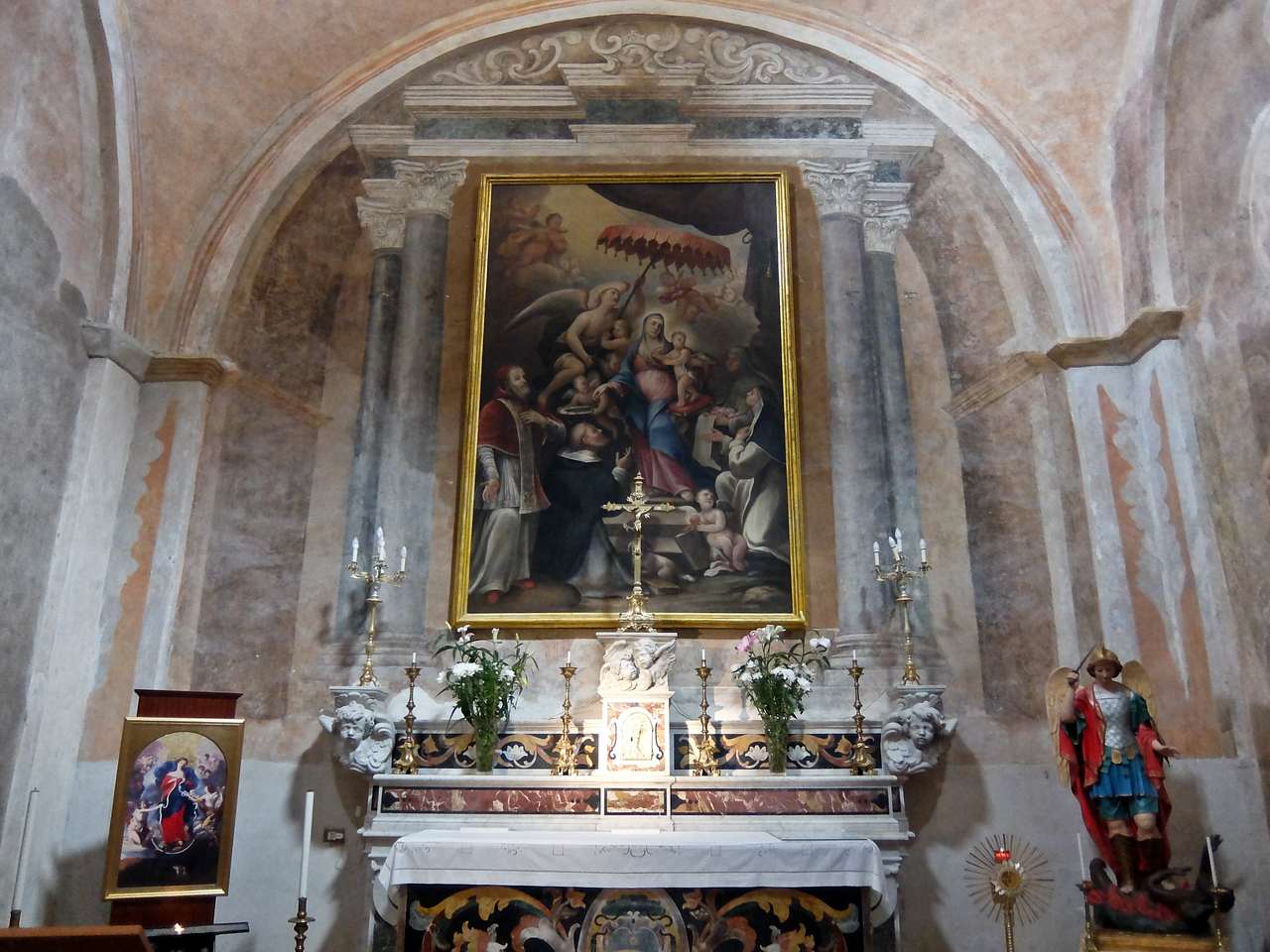 Old Caserta, 10 km from the modern town, is a well preserved medieval hilltop village topped with a ruined castle. The name derives from “Casahirta” (Casa means house and Hirta is hard to reach).The cathedral was consecrated in 1152 and is a perfect synthesis of Arabic, Norman and Sicilian art. The bell tower is Gothic and inside are numerous works of art and a stunning pulpit from the 17th century.

When the palace was built, the entire population was re-located to work in the complex, and even the bishop had to move. These days it’s a popular tourist destination packed with pizzerias, restaurants and bars among its narrow winding streets. It’s worth going there for the view of Naples and the sea, and, on a clear day, you can see the island of Capri.

FLY: Ryanair flies to Naples from London Stansted. It’s a bus or train ride to Caserta.

STAY: The Plaza Hotel is a comfortable base in Caserta.

EAT: Le Colonne serves imaginative Italian food in the centre of the town.