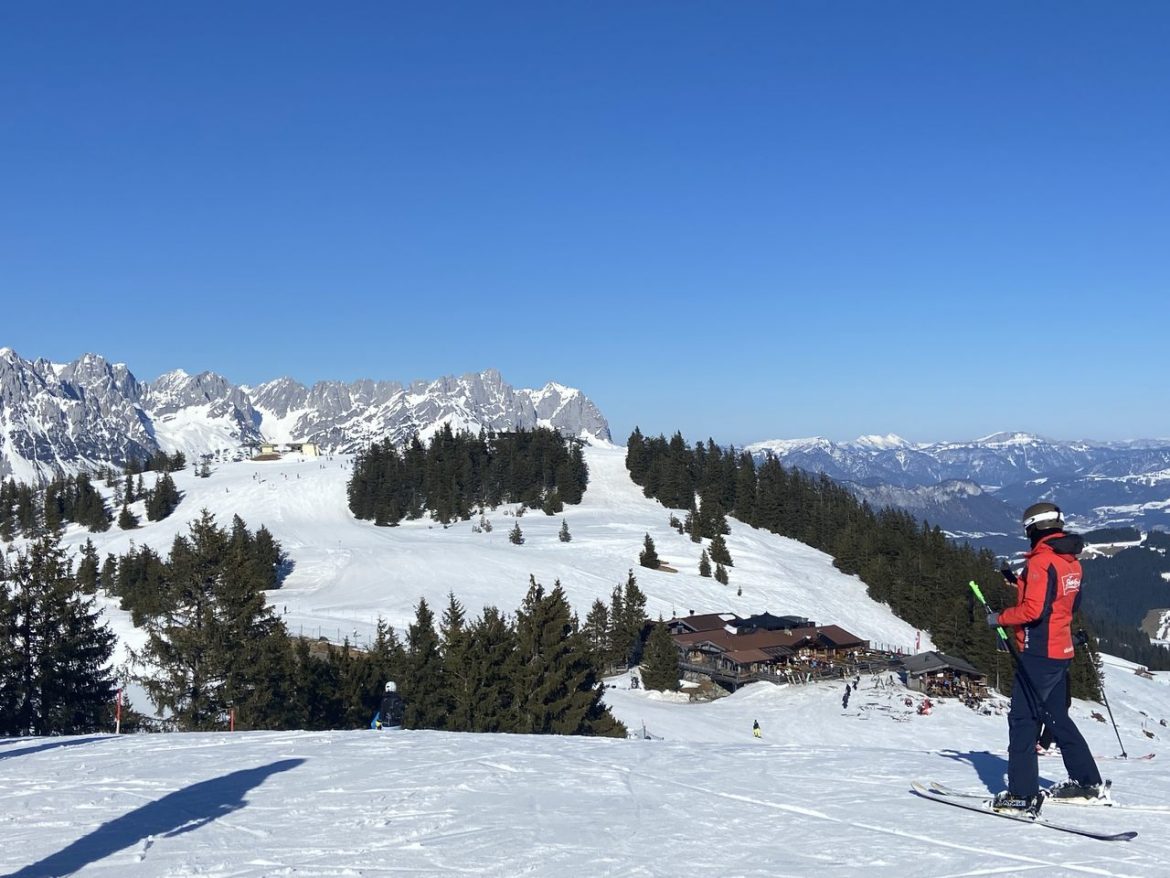 The full name is actually SkiWelt Wilder Kaiser – Brixental, which might be unwieldy but namechecks the two regions that linked up to create this spot. Almost 180 miles of piste connecting nine villages full of mostly easy-going skiing.

Some of the resorts are names that are on most people’s radar – Ellmau, Söll, Westendorf – while others are smaller and less well-known… Going, Scheffau, Itter, Brixen im Thale. But you get to see them all as you ski, except maybe tiny Kelchsau, off the main circuit, with its three little lifts.

The skiing is a fairly even mix of reds and blues sprinkled with a few blacks, so great for intermediates and those who simply enjoy cruising. For better skiers, there are great days out, skiing safaris from place to place, rarely visiting the same run twice. From Scheffau in the midst of the stream of places in the Wilder Kaiser, Going at one end, Hopfgarten at the other, also taking in Ellmau, Söll and Itter, there’s a mass of mountain-top skiing, some in the open snow, much down amongst the trees.

The top point here is 5,500ft, so not massive and not as craggy as some areas. Ski over the back and down to the link with Brixental, a bridge across the main road, and curiously the scenery changes. The peaks here and above Westendorf (high point 6,400ft) are much more alpine.

This is a great place for learners, with beginner areas in each resort and easy slopes from end to end, letting improving skiers explore without fear. Fun parks with jumps and bumps are in most villages for enthusiastic boarders and daredevil skiers.

Experts won’t find too much to challenge them, but the ability to travel from place to place, and the many exhilarating runs down to valley level, go some way towards making up for that.

It’s big, and it’s beautiful, mostly in a pleasing rather than dramatic way, but then there’s more – SkiWelt is also linked, by the Ki-West lift, to the equally impressive Kitzbühel region, another 145 miles of runs.

And then… the KitzSkiWelt Tour, a newly signposted mega day out that lays claim to being the world’s biggest ski circuit, a 55-mile round-trip from Going in SkiWelt to the far edge of the Kitzbühel region and back. You have to be in the right place when the lifts open, as even hardened skiers say they can only just get back before the lifts close, even without stopping for lunch.

An easier alternative, although not by much is the SkiWelt tour, another new signposted circuit, 42 miles clockwise, 52 miles counter-clockwise, that can be started from any village. 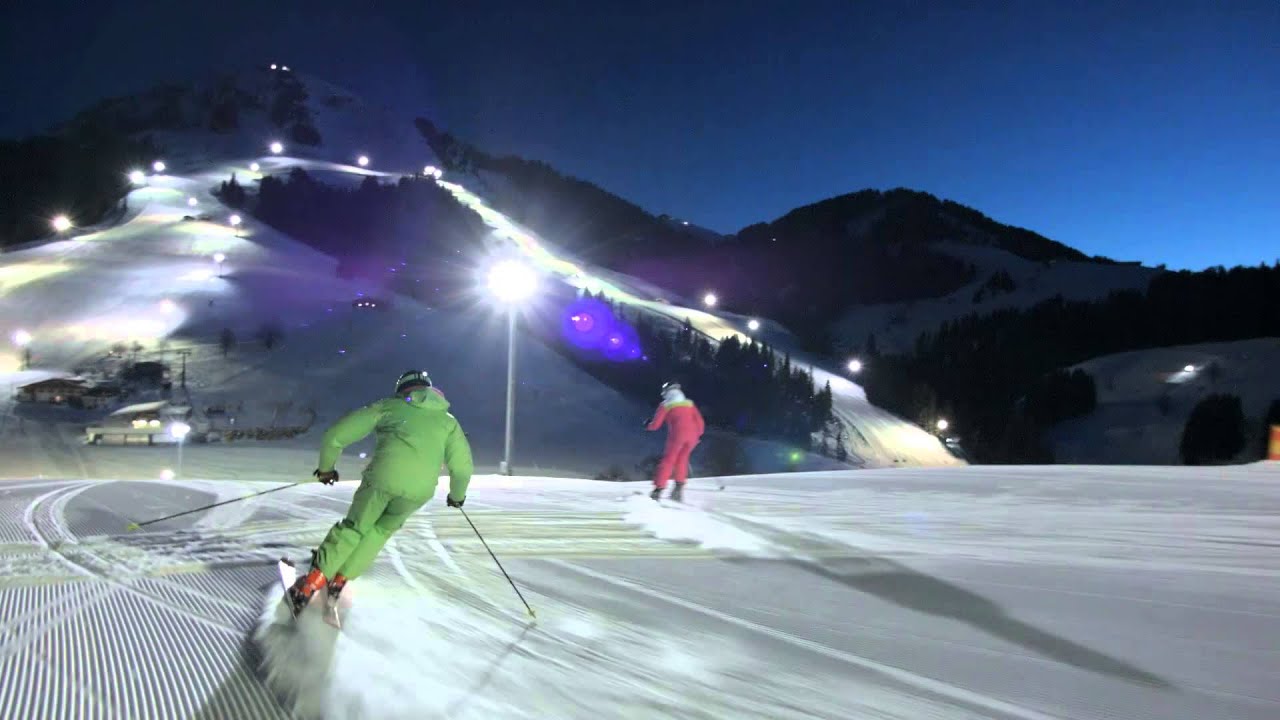 The ski area is an eco award-winner – the Sonnenlift drag-lift, near the link with Kitzbühel, was skiing’s first 100 per cent solar-powered lift, two other lifts also use solar power and Ellmau is this year building a photovoltaic set-up to power both valley and lifts. Other power comes from 100 per cent renewable hydropower. SkiWelt’s 15 snow reservoirs are replenished naturally in summer by snowmelt or rain.

Stöcklalm, on the slopes above Söll, is fun for apres-ski When I visited, a chap in a pinstripe suit was standing on outside tables playing sax to a disco beat as the afternoon drew to a close. We then moved inside for a Saturday teatime fondue – beef, pork and chicken with lots of chips or cheese with real rolls to break up and dunk – ready for 6.30 night ski lift opening. 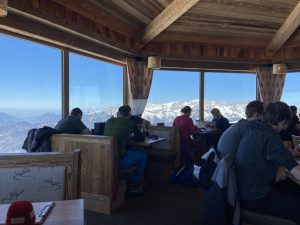 Umadum Stubn, at 6,000ft, Austria’s highest revolving restaurant, a modern timber mountain hut with its interior doing a circle every half hour offering views of 70-plus 10,000ft peaks. Austrian lunch specialities included a splendid Tiroler groestl with a cabbage salad (€11.80).

Close by is the Salvenkirchl church, timber-clad on the outside, classically beautiful inside.

Come evening there are many charming restaurants, depending on which resort you’re staying in. The Sonneck, overlooking the golf course in Ellmau, is a cosily traditional setting but with spirited food by the new, younger team that runs it.

Michlwirl in Westendorf brings together an ancient tavern atmosphere with a modern take on classic dishes, from blood sausage roast to guinea fowl breast with asparagus risotto and wild garlic foam.

Plenty of bars, too, although this isn’t a noted apres-ski destination. The Moonlight Bar at the bottom of the slopes in Söll is a lively spot late into the evening, especially when there’s night skiing.

Above Brixen is Alpeniglu, a collection of snowy igloos. On a spring day, the outside bar is a jolly late afternoon spot. There’s also an indoor (in-igloo) ice bar, dinners can be booked amid the ice carvings in the main igloo, 18 mini igloos offer overnight stays – and there’s an igloo church for the coolest of weddings. 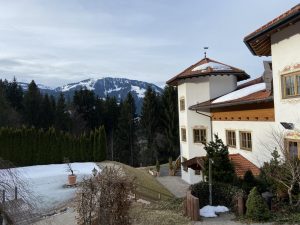 Scheffau is a good bet, right in the middle of things. Hotel Leitenhof sits above the village across the valley from the slopes, five minutes to the big base area by shuttle minibus which calls at the door. There’s a village feel, the main hotel, white painted with turreted rooms, plus chalets on a slope above the bathing pond and another building of suits with balconies at the top.

The excellent restaurant is served by the hotel garden and the surrounding forest, and the circular Pavilion bar.

KRAFTalm is a contemporary rustic delight 4,450ft up on the slopes above Itter, on the site of an ancient mountain hut. The 29 rooms are rich in granite grey, reclaimed wood and designer touches and the spa has an indoor/outdoor infinity pool, sharing the mountain panorama of the glass-walled sauna. Modern Alpine food – and great for a sunny coffee as you’re passing.

Only 50 miles from either Innsbruck or Salzburg airport, 75 miles from Munich, there are flights with British Airways and easyJet. There’s free travel between the villages year round on public transport.