Home WorldEuropeLithuania Soviet Bunker in Vilnius, Lithuania: back to the USSR
LithuaniaTravel Articles 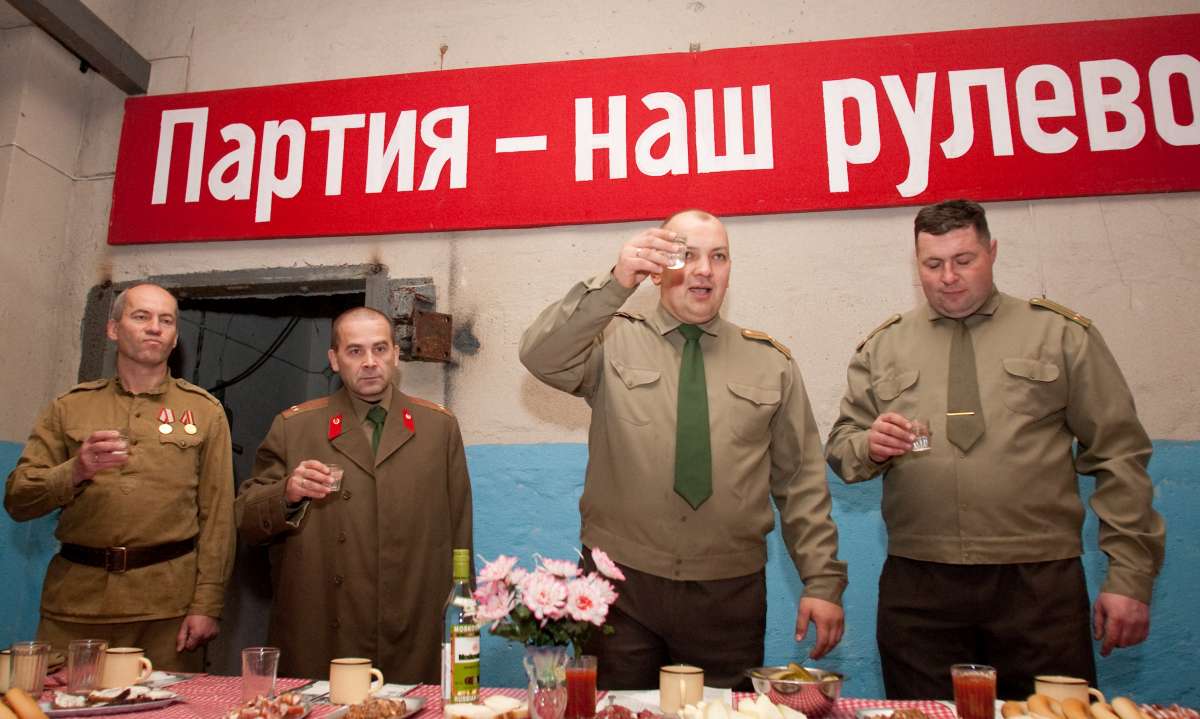 In the run up to 2009, when Vilnius officially becomes European Capital of Culture, an eclectic mix of events reflecting Lithuania’s tumultuous history, culture and identity are already in full swing.

One bizarre living history experience on offer is a survival drama where participants step back to 1984 and into the iron grip of the Soviet Union. Taking place in a disused bunker, the drama is an all too realistic portrayal of life under communism, with big brother a grim reality for the populace of that time. 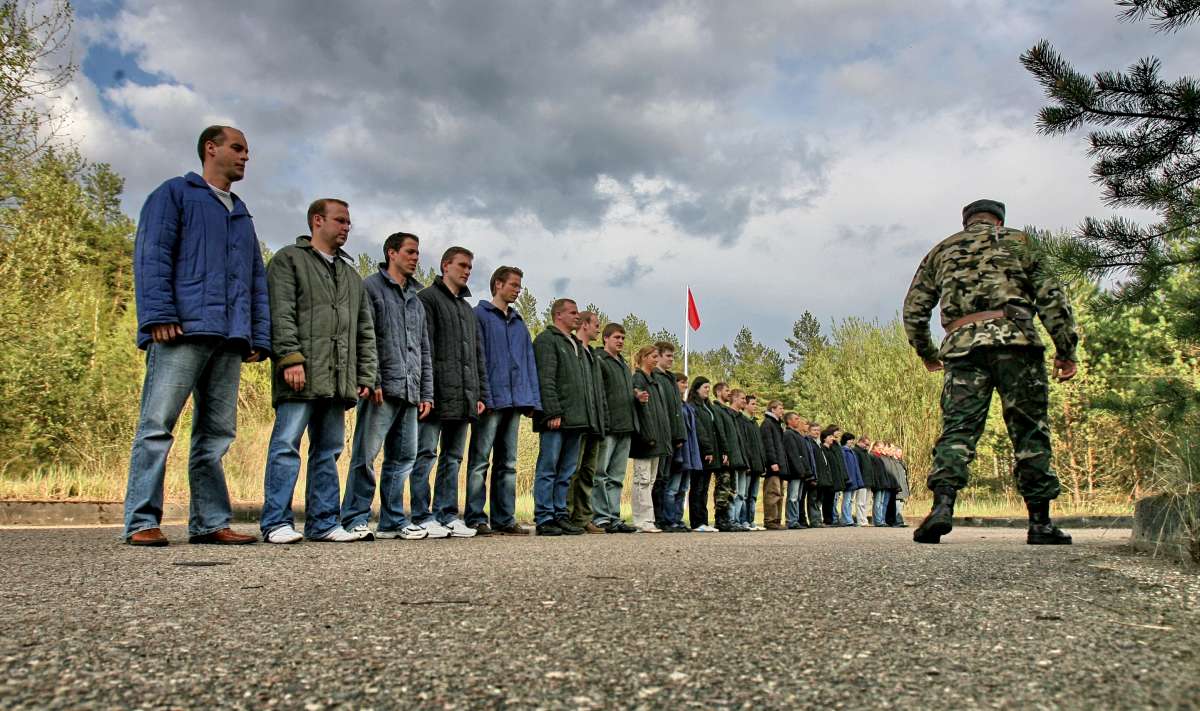 Droplets of rain fell on a parade ground, in a forest clearing some 25 minutes outside of Vilnius. With feet positioned neatly along a painted white line, our 20-strong group apprehensively waited in silence, unaware of what lay ahead. We did not have to wait long before the silence was broken. A deep, stern voice barked out commands in Russian. Standing before us was a bullish-looking man, resembling every preconception of a gulag commandant, wearing a long grey military overcoat adorned with red communist insignia and rank, he started to intimidate the group assembled before him.

”The year is 1984 and you are now under the control of the USSR military”, he denoted sharply, his eyes ran the length and breadth of the line of anxious citizens, “you will not think, but just do everything asked of you without question”. The hammer and sickle flag was ceremoniously raised as a crackly speaker played the national anthem of the USSR. 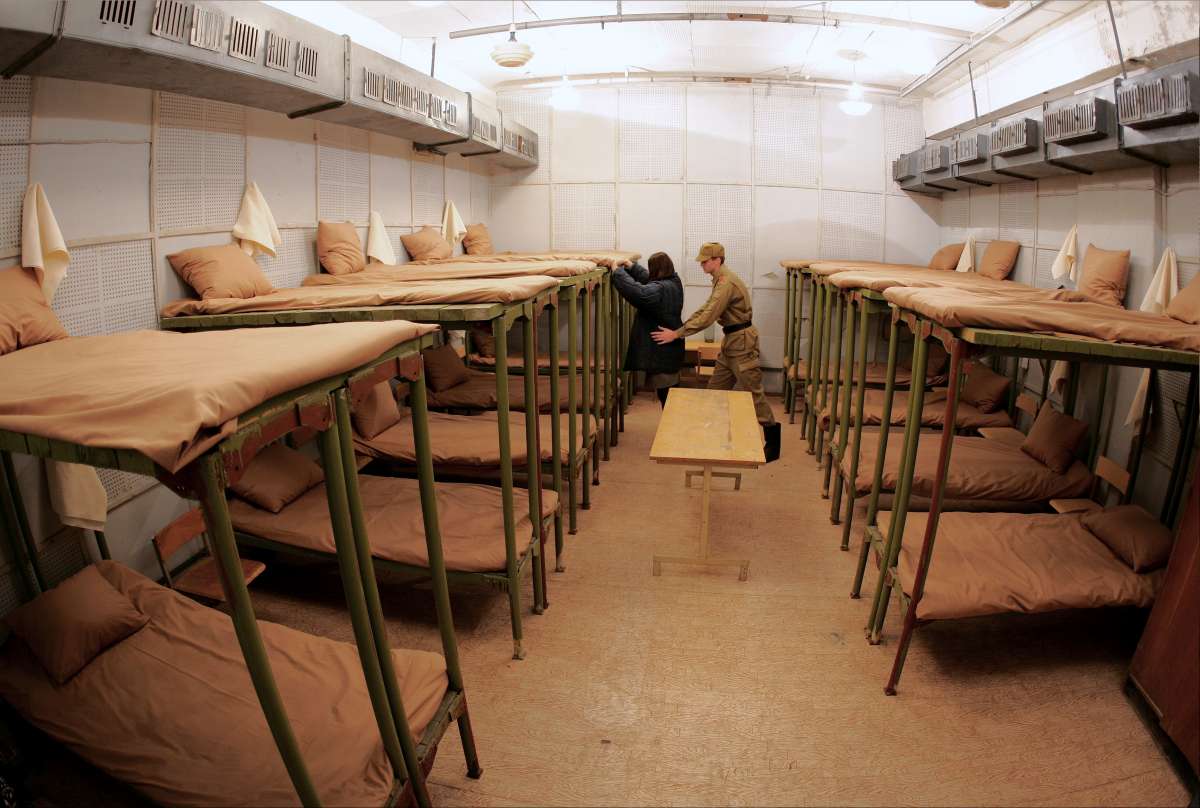 This was our rude awakening to life under the control of totalitarian state government. A few meters from the parade ground stood a single entry doorway, the only indication that a 2,500 sq metre, de-commissioned soviet bunker built in the early 1980’s as a clandestine TV & radio installation, laid beneath our feet. On the orders of Leonid Breshnev, this was one of three installations created within the USSR. This particular bunker has it’s own place in Lithuanian history as it housed Soviet troops before they stormed Vilnius TV Tower in 1991 where 13 Lithuanian citizens were killed in attempting to free the country from the shackles of communism which finally came in 1993.

As we ascended single-file into the dark, dank concrete jungle wearing threadbare work clothes it was easy to forget 2008 and take on the role of a communist citizen of 1984. Reality struck as our group was shepherded at speed along labyrinthine corridors and staircases until disorientated. Lurking within the shadows, uniformed officers stood guard with barking Alsatians, ensuring the atmosphere of fear and subordination remained real and constant. 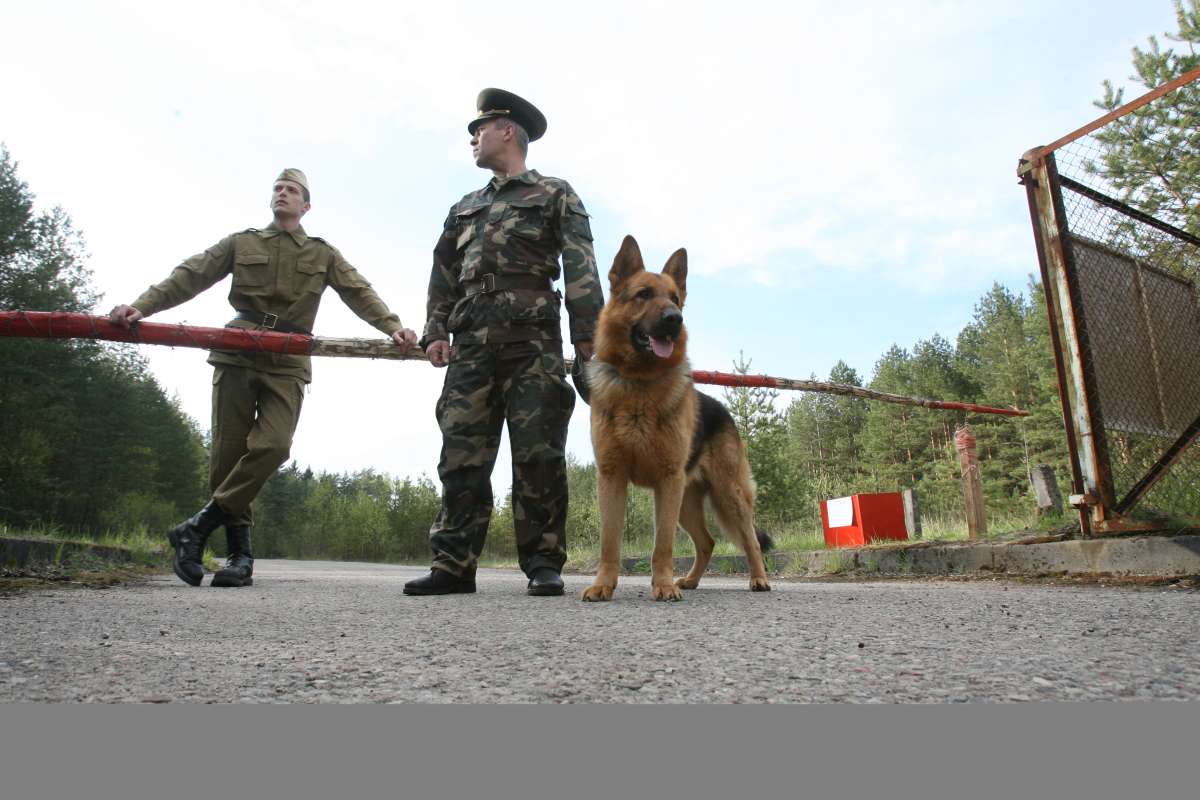 Uniformed officers with barking Alsatians, ensuring the atmosphere of fear and subordination

For the next two hours we are in constant motion, being jostled and pushed to new areas of the bunker, tasked with a series of activities designed to break our resistance, deplete our stamina and prove we are comrades of the state. The first room we are taken too is a boardroom reserved for party members of rank and as such we were ordered to our knees while the bunker commandant propagated the benefits of being a citizen in the USSR. An old television set spluttered into action to show Breshnev giving a speech at the Kremlin, to which we were obliged to clap our support. 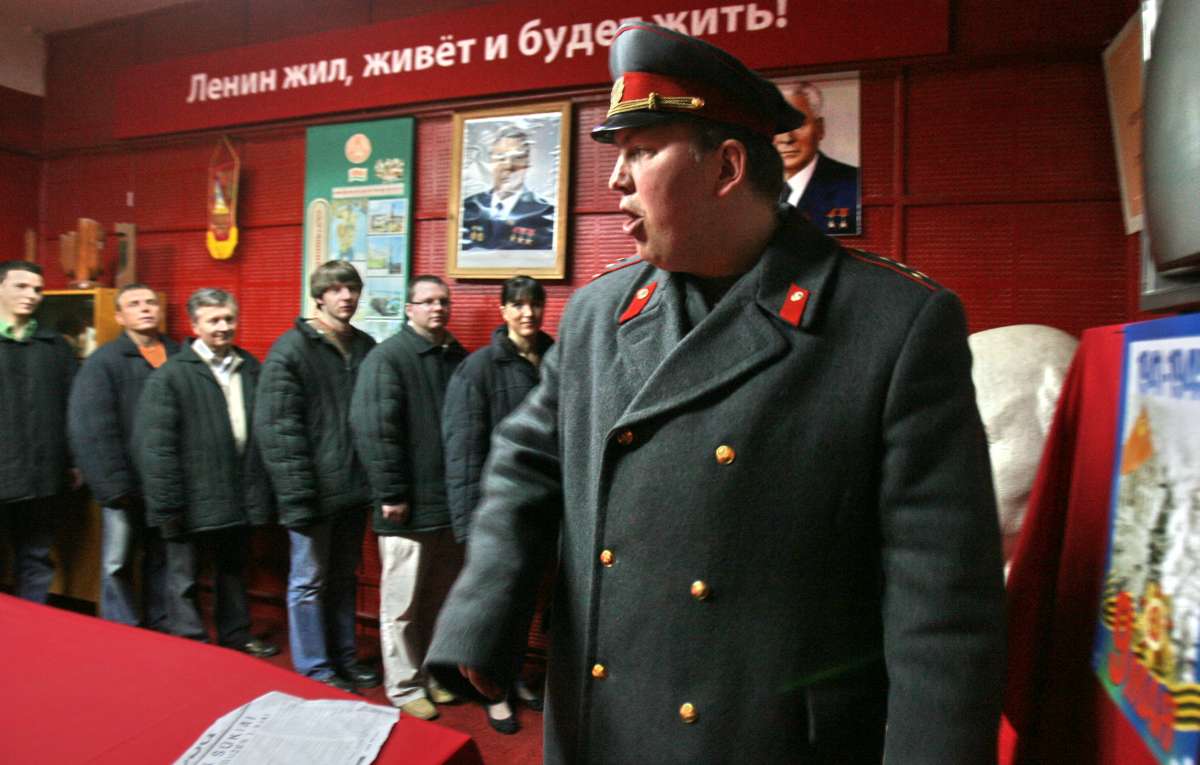 “Stand up straight and against the wall” ordered a KGB interrogator

Split into groups, we were then taught how to use a gas mark in the event of nuclear attack. Positioning canister to mask and then mask to face may sound straight forward, but trying to see and breath whilst being made to jog around the corridors is a far harder proposition. This activity was scant preparation for the interrogation room, where a KGB interrogator awaited. “Stand up straight and against the wall” he ordered, a desk lamp the only source of light, as he prowled the room waiting to accuse someone of a crime against the state. Forcibly, one unlucky citizen signed a statement, before being frog-marched from the room. Moments later a muffled gunshot is heard further down the corridor. 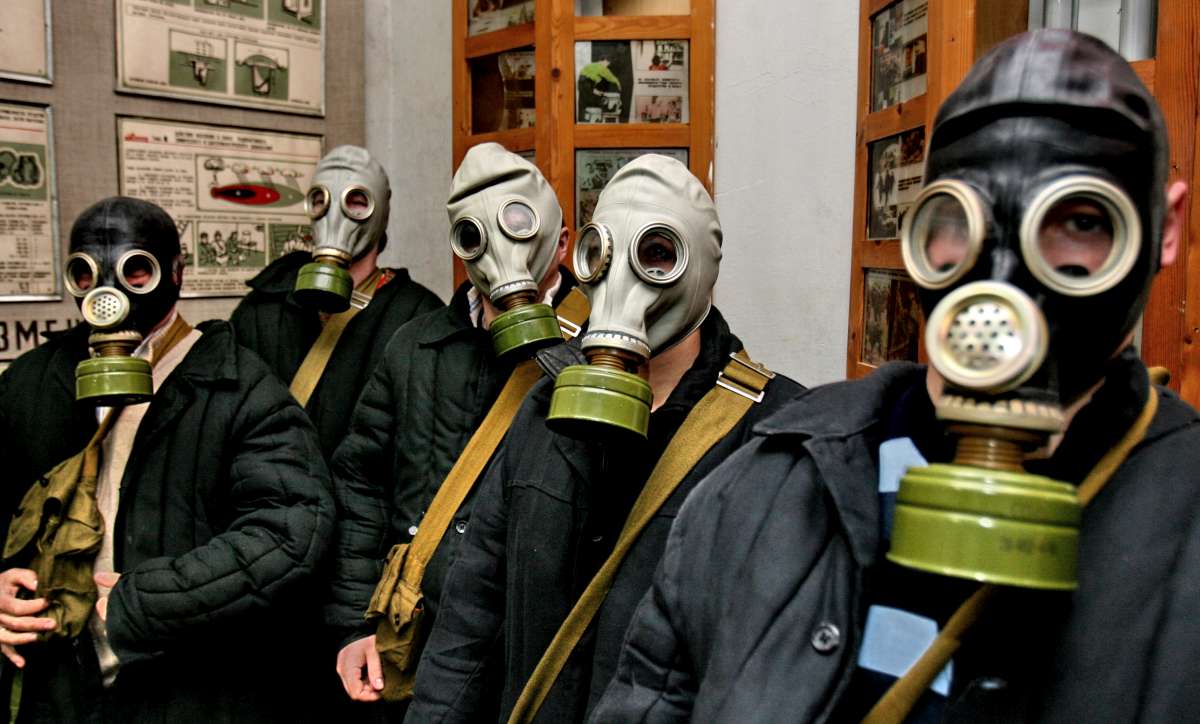 In what appeared to be the deepest part of the bunker, metal and rubber debris was strewn across the floor and across two huge stone tablets raised from the ground. “Everyone in the Soviet Union has work and everyone must work”, the commandant voiced menacingly, “do you want to work?” his question loaded and rhetorical. With that we were made to repeatedly clear the debris from one tablet to the other, to drill home the principles of working for the state. Our endeavours did not impress, as we were locked in a blackout room where the stench of damp stung the nostrils.

Our ordeal slowly came to an end as the guards tentatively pulled us back to reality and away from the nightmares of 1984. Our final task was to choose a memento from the scant choice of soviet items prepared in a make shift bunker shop. Solid blocks of soap wrapped in newspaper or eau de toilette entitled Russian Forest were some of the quirky items on offer. A certificate of participation, along with a shot of Vodka and a tinned meal were our final memories of being Back in the USSR, before the huge steel doors opened out the forest and freedom! 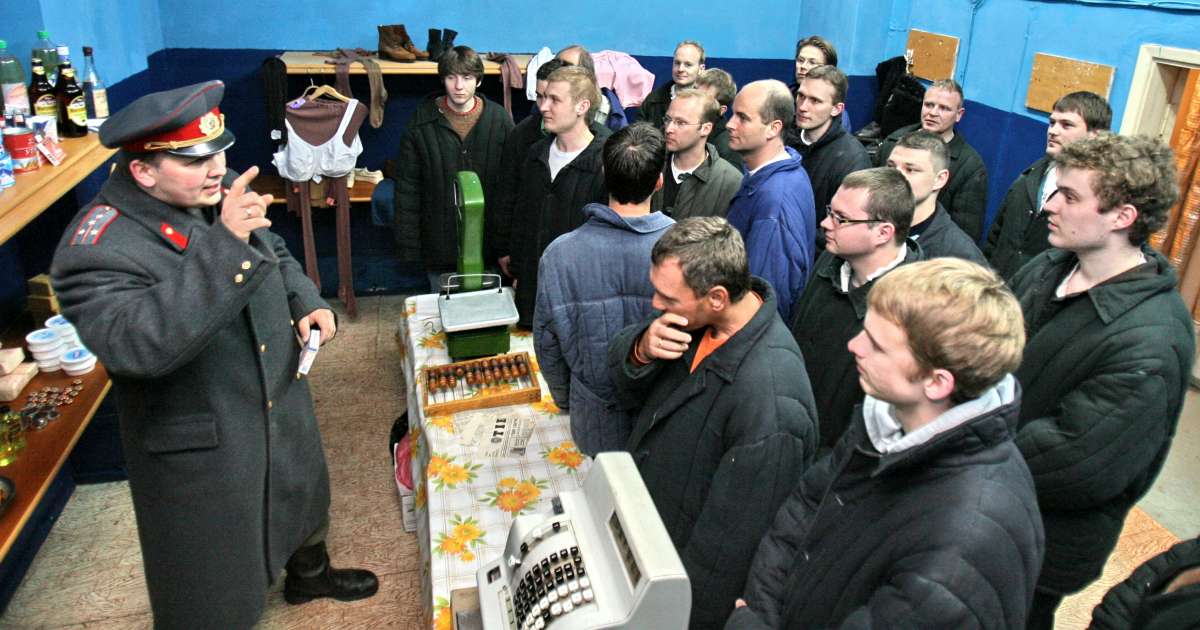