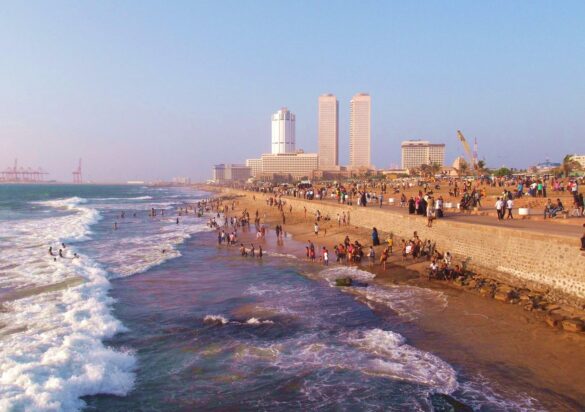 The Foreign Office is advising against leisure travel to Sri Lanka after a series of violent protests and civil unrest broke out on its streets.

Holiday company TUI has cancelled all holidays up to and including 31 May 2022, to the beleaguered country.

The island nation is experiencing the worst economic crisis since its independence from Britain in1948. Civil unrest is growing and  COVID, rising oil prices and a bankrupt government (caused by populist tax cuts by the president and his brother, until recently the prime minister) are cited as the reasons for the growing anger.

In a televised address yesterday, Sri Lanka’s new Prime Minister Ranil Wickremesinghe said the nation urgently needs $75m (£60.8m) of foreign currency in the next few days to pay for essential imports. He added the country has run out of petrol.

Protests have been taking place since March 31, while a state of emergency has been declared in May, alongside an island-wide curfew. Protesters took to ransacking a luxury hotel, the Avenra Hotel, and set it on fire.

Tui said there have been flashpoints of violence against protesters in Colombo and Kandy and ‘further incidents could take place.’

“We’ve unfortunately had to cancel all holidays to Sri Lanka departing up to and including May 31, 2022,” .

“We will be proactively contacting all impacted customers in departure date order.”

Tui added that passengers transiting through Colombo Bandaranaike Airport are not affected.  The Travel Magazine views this as overly optimistic as a shortage of USD will certainly impact the airport’s ability to purchase aviation fuel. No one wants that refuelling stop of 90 minutes to be rescheduled to 90 days.

Tui finishes by saying it ‘continues to monitor the situation and will advise customers should there be any further updates.’ Indeed.

Can a plant-based diet be nutritious, tasty and satisfying? Balance Box says it can. We give it a go.