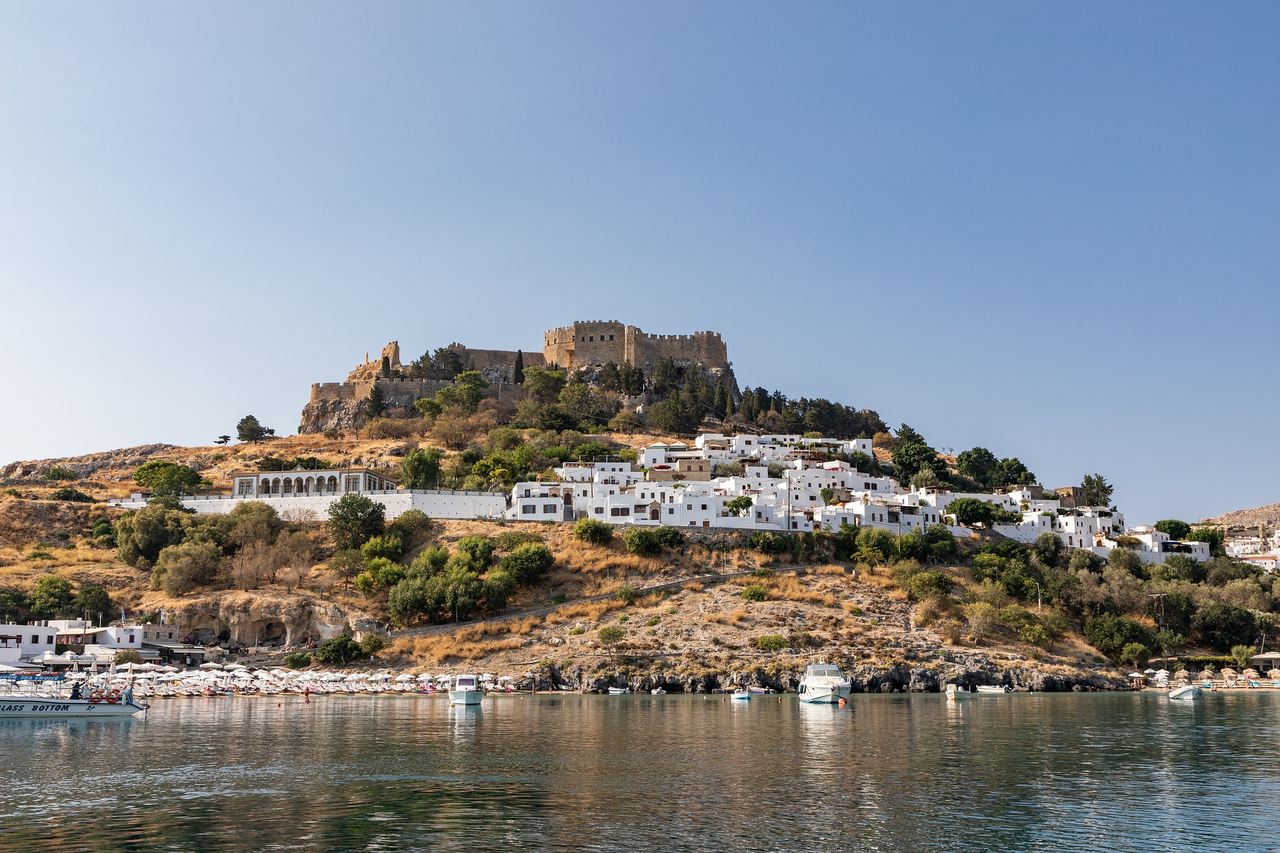 Greek islands are known for their aquamarine shores, pearl-white beaches, and sunsets that unfurl dramatic streaks of colour. But Rhodes’s true novelty and charm isn’t in its beach aesthetic: it lies in its layers of ancient history and the lasting presence of those who came before.

From Rhodes’ Old Town to its flowered coastline, the tales of ancient days are celebrated in the remains of medieval streets, majestic churches, fortresses, and acropolises.

The Streets of the Knights 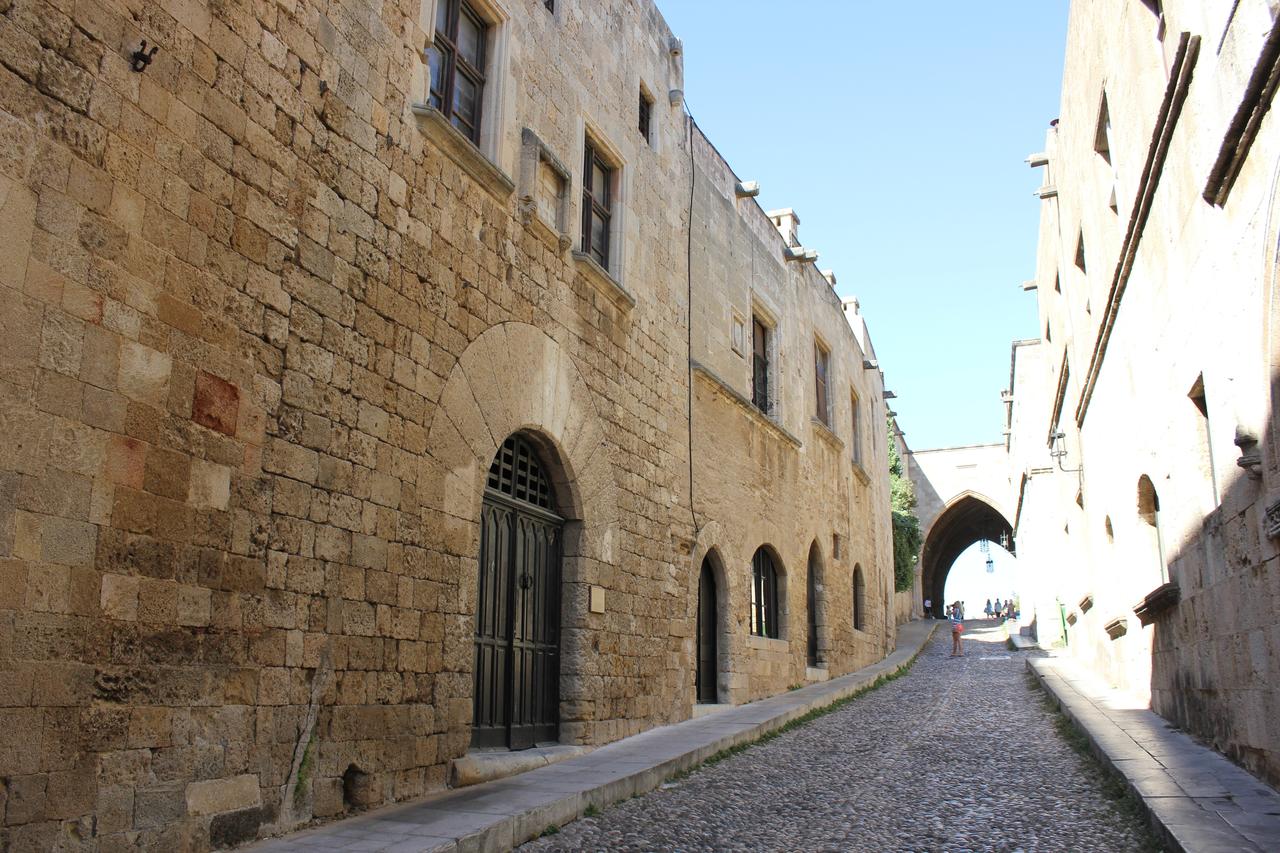 The Order of the Knights of St John housed its European members in this 600m cobblestone street, divided into seven inns for the seven countries from which they came. It’s flanked by a splendid archway, complete with a bridge, turrets, and arched doors and windows.

This might trick you into believing it’s simply another quaint boulevard leading from the Archaeological Museum to the Grand Master’s Palace: but take a moment to spot the original reliefs lining the street, showing off the patriotism, religion, and cultural sentiments of the 14th century.

The most impressive features include the old hospital and the coats of arms honouring Grand Masters Philippe Villiers de L’isle Adam and Raymond Bérenger; the Pope; and England.

Palace of the Grand Master 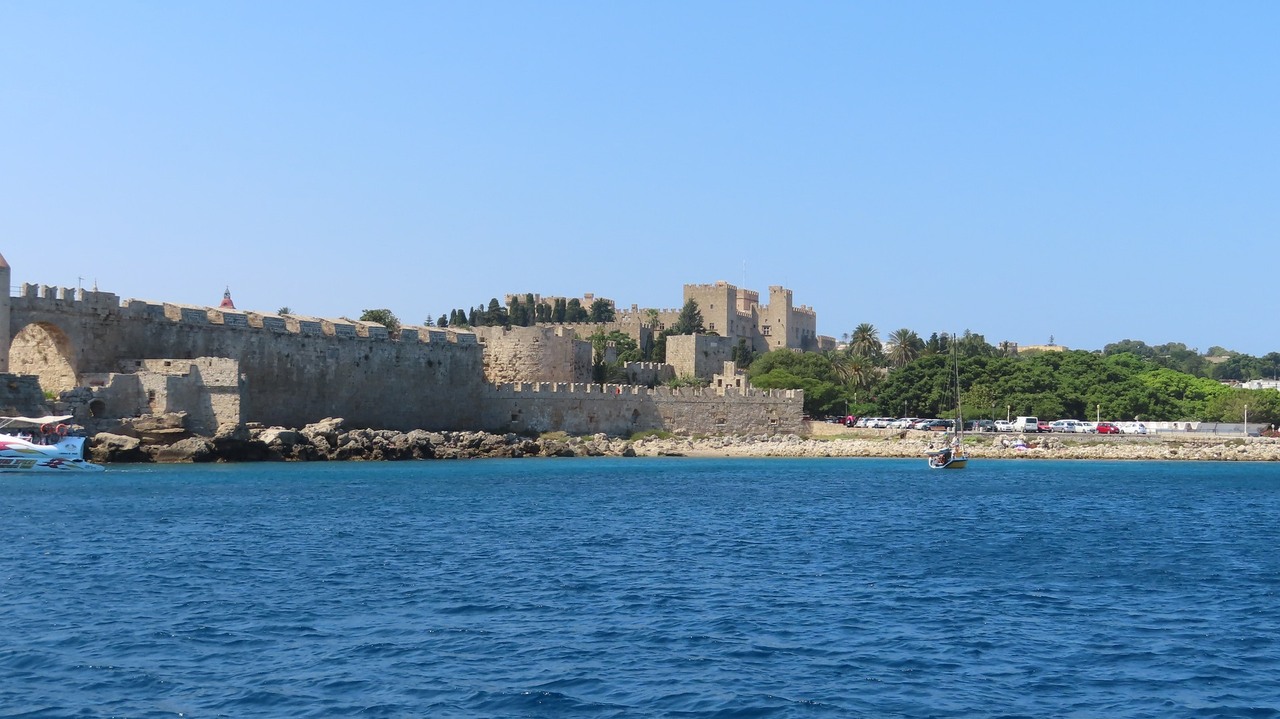 Palace of the Grand Master – photo by xoona

This 14th-century palace served as the Knights’ administrative centre and the Grand Master’s residence. The palace revels in the Knights’ military victories and its vital role as Rhodes’ primary defence, with its spherical towers and 12m-thick walls. The colossal granite cannonballs, triumphantly used against the Turks, litter the bastion’s extensive grounds.

Twenty-four rooms are open to the public, including the Grand Reception Hall and the Grand Master’s private chambers. These display 16th-17th century furniture, hand-woven medieval textiles, multi-coloured marbles, ornately carved seats, and mosaics depicting Medusa. The oriental vases are a wonder and speak volumes about the Knight’s intercontinental activities, but they feel jarringly out of place.

On Orfeos Street in the Old Town, you’ll discover a carefully restored Byzantine-style clock tower with baroque elements, a copper dome, a weathervane, and symmetrical columns.

Dating back to the 7th century, the top of the tower delivers a glorious 360-degree vista, and it can be reached by simply climbing a set of 53 wooden steps.

Here, you can hear the bells clang while marvelling at the distant Aegean Sea and harbour, fronted by the Suleiman Mosque and Palace of the Grand Master. You might want to stop off at the terrace café beforehand to enjoy the complimentary beverage included in the admission ticket!

Neighbouring the harbour, the 14th-century Church of Our Lady of the Burgh is a casualty of the Second World War. But, its skeletal remains are perhaps one of the finest examples of Gothic architecture in the Old Town, offering a faint glimpse of its former glory. Its three aisles are bordered by four sturdy columns, topped with pointed archways and distinct rib-vaulting, backed by long, oval windows.

The site is more impressive at night, as it’s illuminated by spotlights, evoking an overwhelming ecclesiastical feel. This feeling is only enhanced when the church’s steps and interior are ringing with orchestral tunes during the music events frequently held here.

As the largest and oldest preserved church in the Old Town, the 11th-century Church of the Panagia tou Kastrou is a fascinating insight into Greece’s religious changes. Initially, it functioned as an Orthodox church dedicated to the Virgin Mary. But, during the 14th-15th centuries, Catholicism reigned under the Order of the Knights of St. John, who renamed the building Sancta Maria Castelli Rodi. Even later, during the time of the Ottoman Empire, it was converted into the Enderum Mosque.

The rib vaulting, pointed-arched windows, and coats of arms celebrating Grand Master Villeneuve and Pope John XXII are must-sees. Next, try to spot the fragments of wall paintings representing four saints and the mother of God. 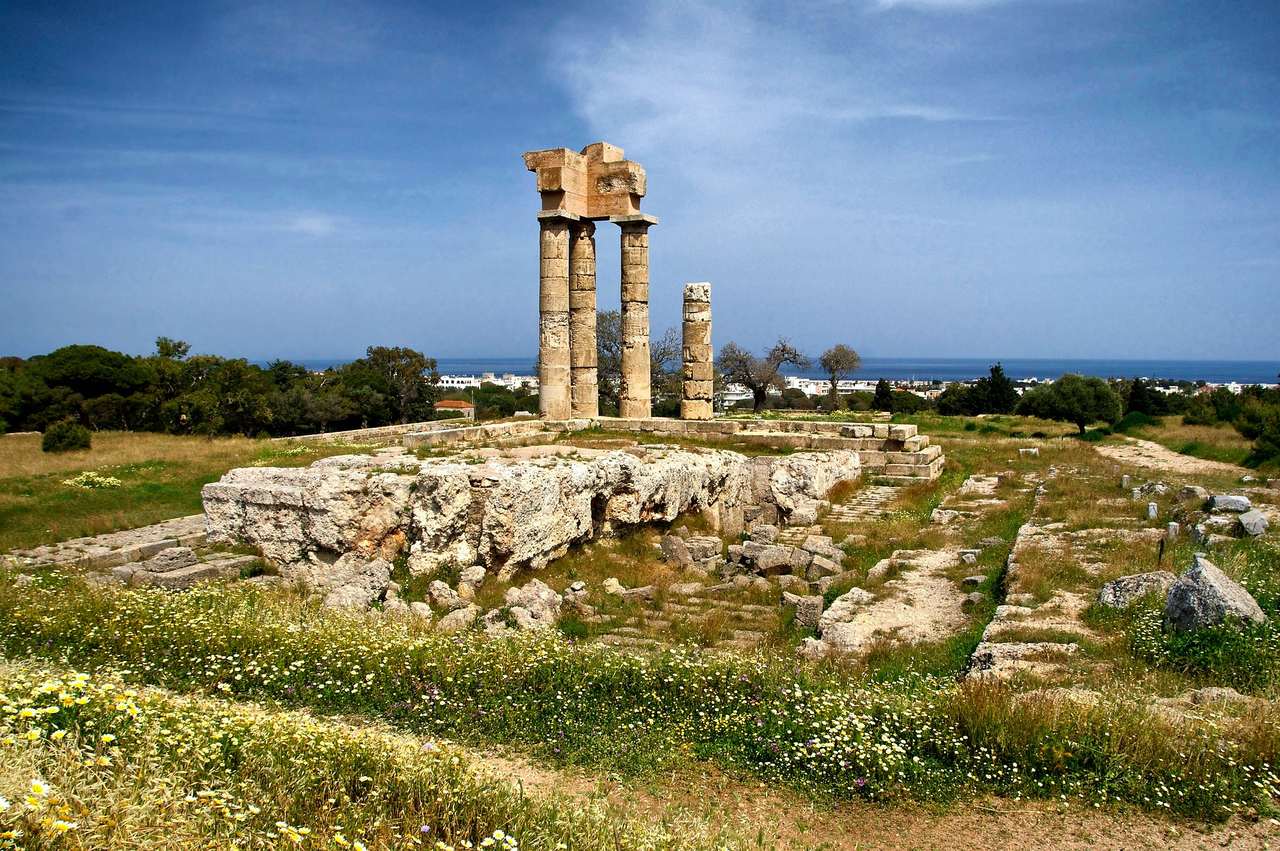 The Acropolis of Rhodes lies on the Monte Smith hill, and, although only a few ruins are repaired, there’s enough to visualise the sites’ original purpose and grandeur.

In true Hellenic style, the acropolis fuses naturally with its surrounding topography. As a result, it is replete with underground sites for cult worshipping, enormous temples – including the Temple of Pythian Apollo – sanctuaries, and public buildings.

The 2nd-century BC stadium is by far the most impressive feature. It is 210m long and displays some original components, like the athletes’ starting mechanism, the sphedone (turning posts), lower auditorium seats, and proedries (the seats assigned to officials). Next door is the marble odeion (theatre) which still stages events, offering you a chance to experience traditional Greek theatre. 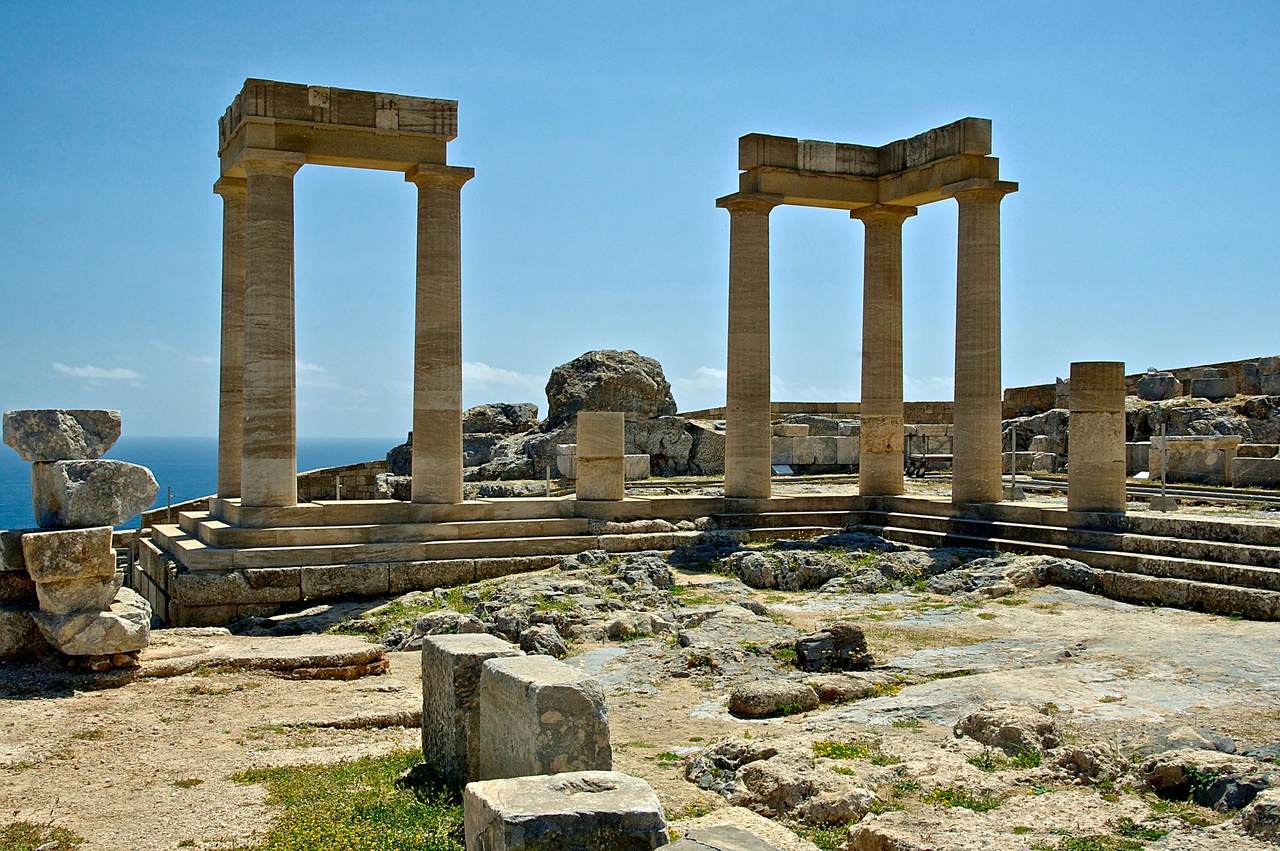 From the white-washed labyrinth of Lindos village, the Acropolis can be seen perching atop a 116m high cliff, enclosed by mighty crenellated battlements. Look for the Rhodian battleship rock carving at the foot of the steep steps leading to this site.

Once within the walls, you’re presented with the temple’s ruins to the goddess Athena Lindia. Here, you can see the beautifully preserved Hellenistic stoa, the Propylaea, and the Byzantine St John Chapel. The former has 20 Doric-inspired columns, which form a stark silhouette against the blues of the sea and sky.

Lindos’ archaeological site extends beyond the Acropolis, among which lies the Theatre (a circular orchestra and auditorium), many churches, cemeteries, and the Boukopion – a place of sacrifices. 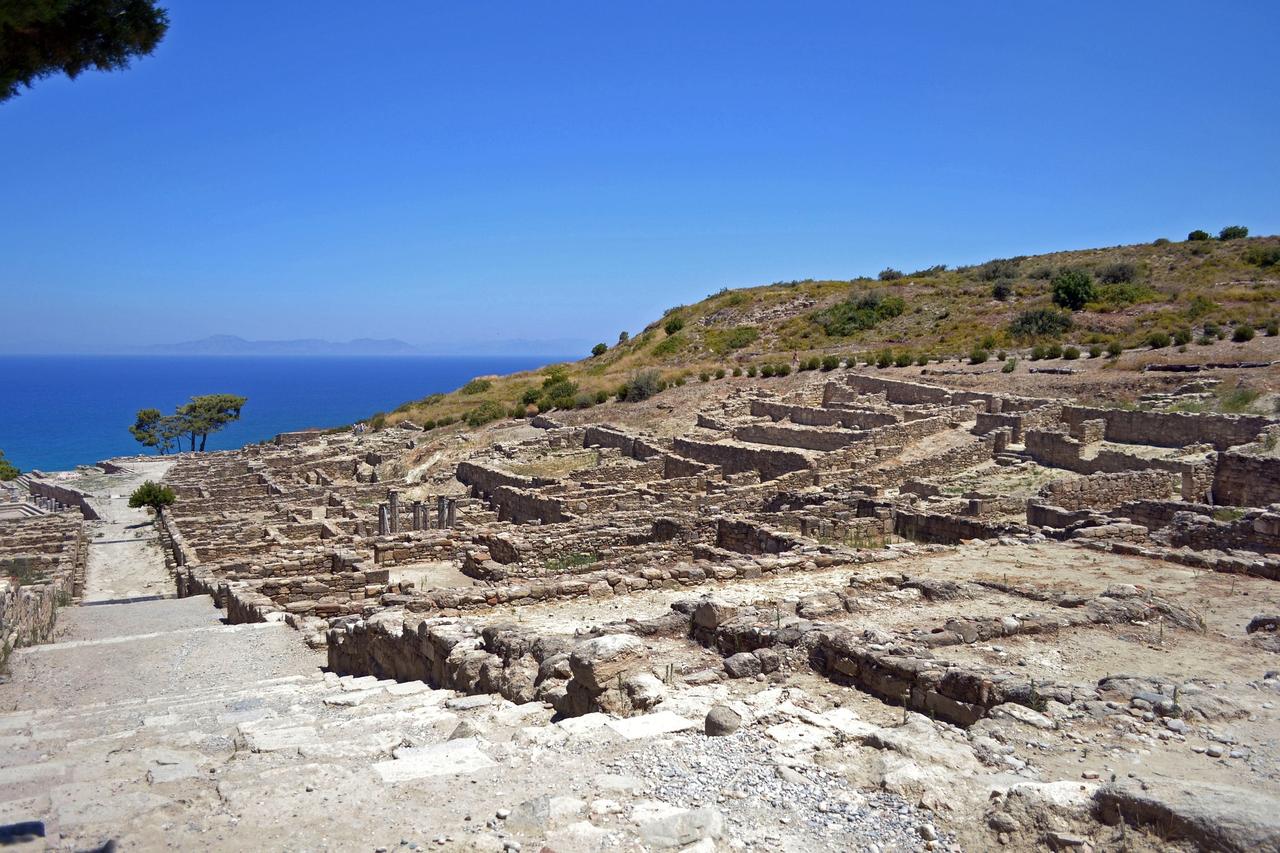 Visit the Ancient Kamiros on the islands north-western coast. The Dorians founded the town in the 6th and 5th century BC, and it lasted until the Byzantine Emperor Justinian’s reign. The remains of the agora (marketplace), the Acropolis, and temples – such as the one dedicated to the goddess Athena Kamirada – are extensive, showing the splendour and prosperity of this ancient civilisation.

According to the Hippodamian system, the urban layout was designed with parallel streets divided into private residences and public buildings. The entire structure is perfectly preserved, providing an intimate insight into the inhabitants’ daily life: their trade (chiefly olive oil, wine, and figs), ceramic industry, settlement, and worship.

This Gothic monastery is hidden among a colony of pine trees, holding a tranquil position on Mt. Filerimos (267m high) and dating to the 15th century and the Knights of St John.

Visit the baptistery’s cross-shaped ruins and the underground church of St. George with its frescoes depicting the knights. There are remnants of ancient Ialyssos, monks’ cells, and the Knights’ church with four chapels. The innermost chapel still displays the original mosaic floor from the earlier Christian church.

There’s also the Via Crucis, a tree-lined pathway outside the monastery claimed by sprightly chicks and regal peacocks. On the right side are reliefs portraying scenes of the Passion of Christ, guiding you to a lookout spot with an enormous iron cross. From here, the vista below becomes a weave of white, blue, and red, fading together as it stretches towards Asia Minor.

From a distance, the Monolithos Castle is concealed within the cascading terrain, despite sitting on a lonely rock summit 236m high. The materials used by the Knights of St John in the 14th century melt seamlessly into this precipice. It might look underwhelming, but the castle is one of the most important defences in Rhodes’ history, withstanding pirate raids and enemy attacks for 500 years.

Here, you’ll find the castle walls and two 15th-century chapels, one beautifully white-washed and the other a stone shell of its original form, looking out to the mountain of Akramytis.

Bournemouth beach bans deckchairs in case people use them as weapons