Top 10 things to see and do in Lisbon

written by Martino Matijevic May 9, 2009 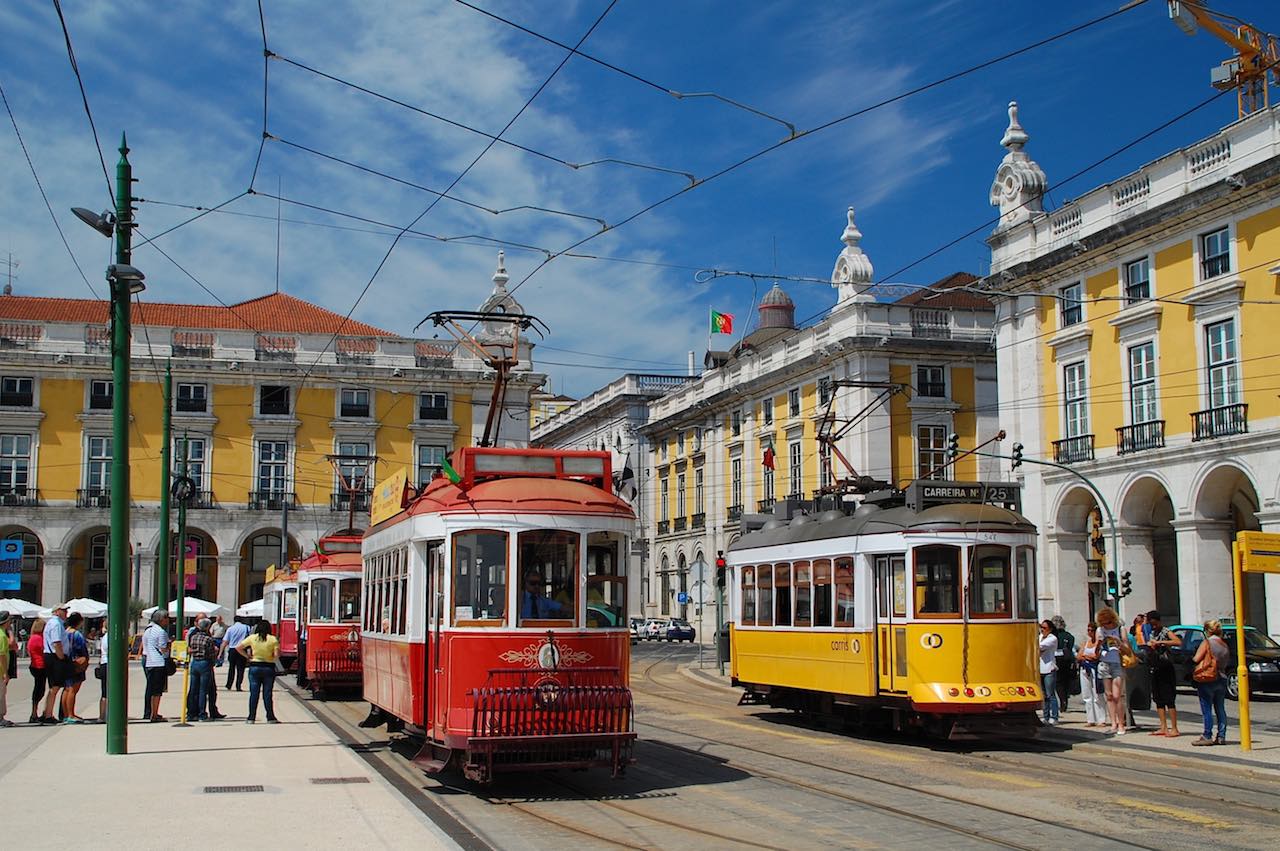 Situated at the Western-most tip of Europe, Lisbon has historically had a strategic importance in the discovery of the World. As such, it is a city rich in culture and history. Having been destroyed by the earthquake in 1755 and neglected since 1928 for almost half a century during the Salazar’s fascist era, Lisbon has had a complete “face lift” in honour of 1998 Expo.

While there are many museums, palaces, monuments and churches, Lisbon is much more about taking in the relaxed atmosphere of the city’s mosaic-cobbled streets and spacious squares, watching the ceramic-tiled buildings, constantly searching for small architectural details – mixing gothic, baroque, romantic, art deco and modern styles – and stopping in a pastry shop to have yet another pastéis de nata cake. Therefore, we have started our Top 10 by describing some of Lisbon’s neighbourhoods. 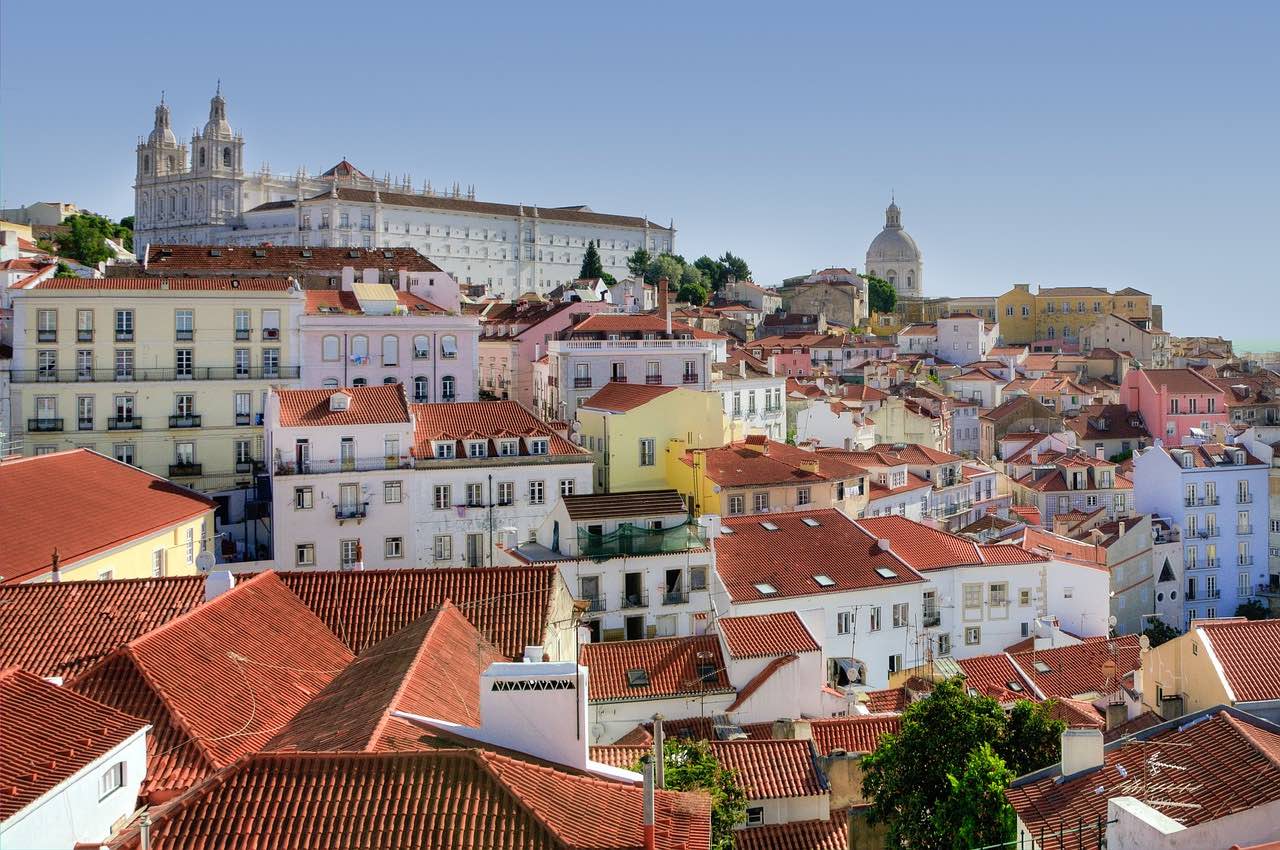 Baixa and Rossio were rebuilt after the 1755 earthquake, with parallel street pattern and organised urban planning. They contain several large squares, such as Praça de Dom Pedro IV, Praça da Figueira and Praça dos Restauradores, each bustling with people. This is also where you can find several popular pedestrian streets: Rua das Portas de Santo Antão, Rua Augusta and Avendida da Liberdade (not pedestrian, but with wide pavements – ladies, do not wear pointy heels or you will probably not appreciate the beauty of the mosaic pavement). Make sure you visit the Rossio train station, with its gothic architecture and have a look at the inside, with ceramic tile decoration.

Bairro Alto and Chiado quarters are where the nightlife is. But during the day there is so much to see too: from Praça dos Restauradores take the Glória funicular railway (another funicular railway to try is Bica, on the other side of Bairro Alto – see below) and admire the view from the belvédère at the top. Then loose yourself in the streets of Bairro Alto and walk towards the Convento Museu do Como, a church with no roof. From there, take the Elevador de Santa Justa (see below).

Alfama, Graça and Mouraria are the oldest quarters in Lisbon. Have a walk around their steep streets and make the most of the fantastic views from the Castelo São Jorge and the Miradouro de Santa Luzia. In Graça, visit Largo da Graça, Igreja da Graça and Miradouro da Nossa Sentora do Monte.

Belém is where Vasco da Gama sailed from in 1497 to discover the Far East and the Monumento das Descobertas (the Monument of Discoveries) symbolises the event. It is also a lovely quarter to take a walk and try the pastéis de nata in the famous Antiga Confeitaria de Belém. It contains a number of monuments, such as UNESCO-listed Mosteiro dos Jerónimos (see below), Museu dos Coches (National Coach Museum), with its impressive collection of ancient coaches and a finely decorated fortress, Torre de Belém (see below). From Belém, you also have some stunning views of the Ponte 25 de Abril (see below).

Parque das Nações was built for the 1998 exposition and has little to offer tourists, but it is worth visiting for the Oceanário de Lisboa (Lisbon Aquarium) with a large fish tank in the middle, spreading over two floors.

45 meters high and built in neo-gothical style in 1902 by Raul Mesnier de Ponsard, an apprentice of Gustav Eiffel. 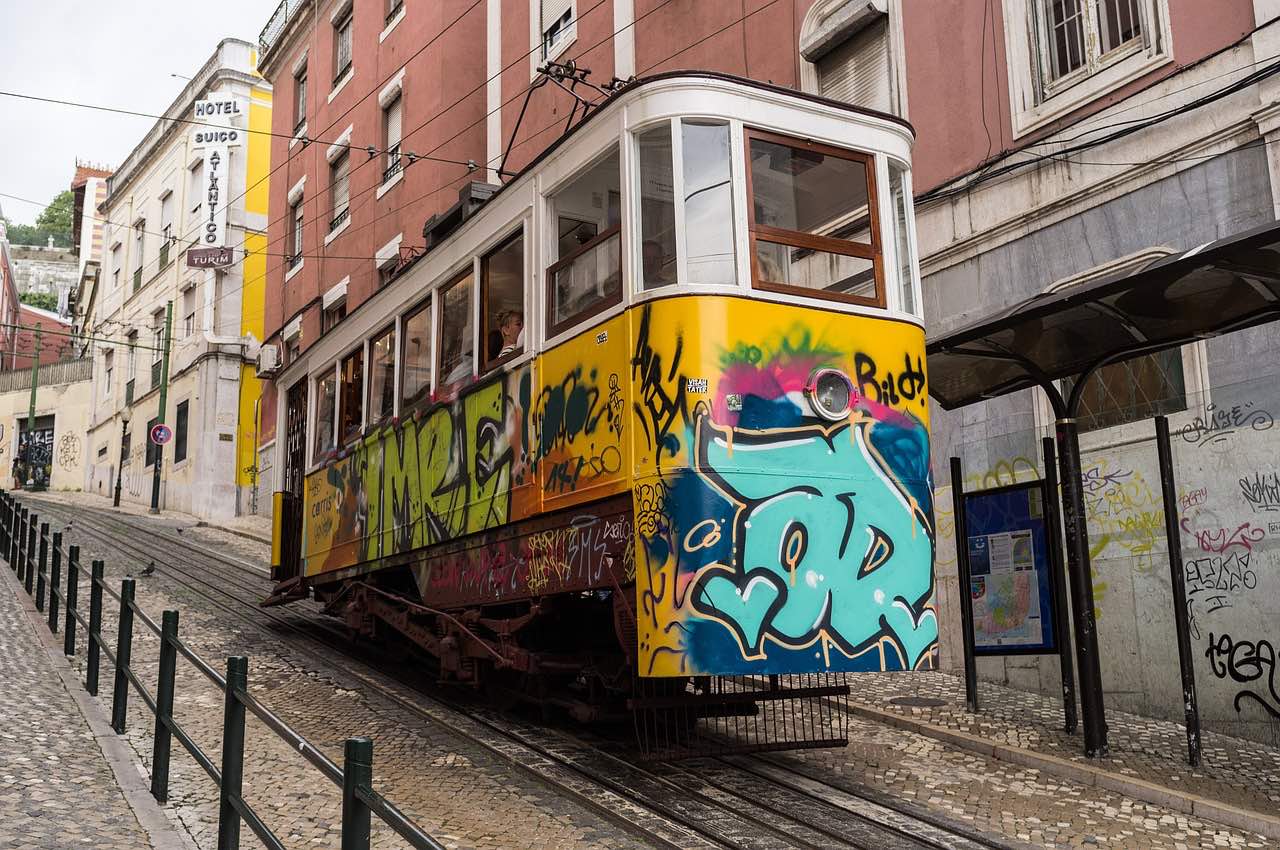 Bica (classed national monument), Glória and Lavra (the oldest of the three, dating back to 1884). 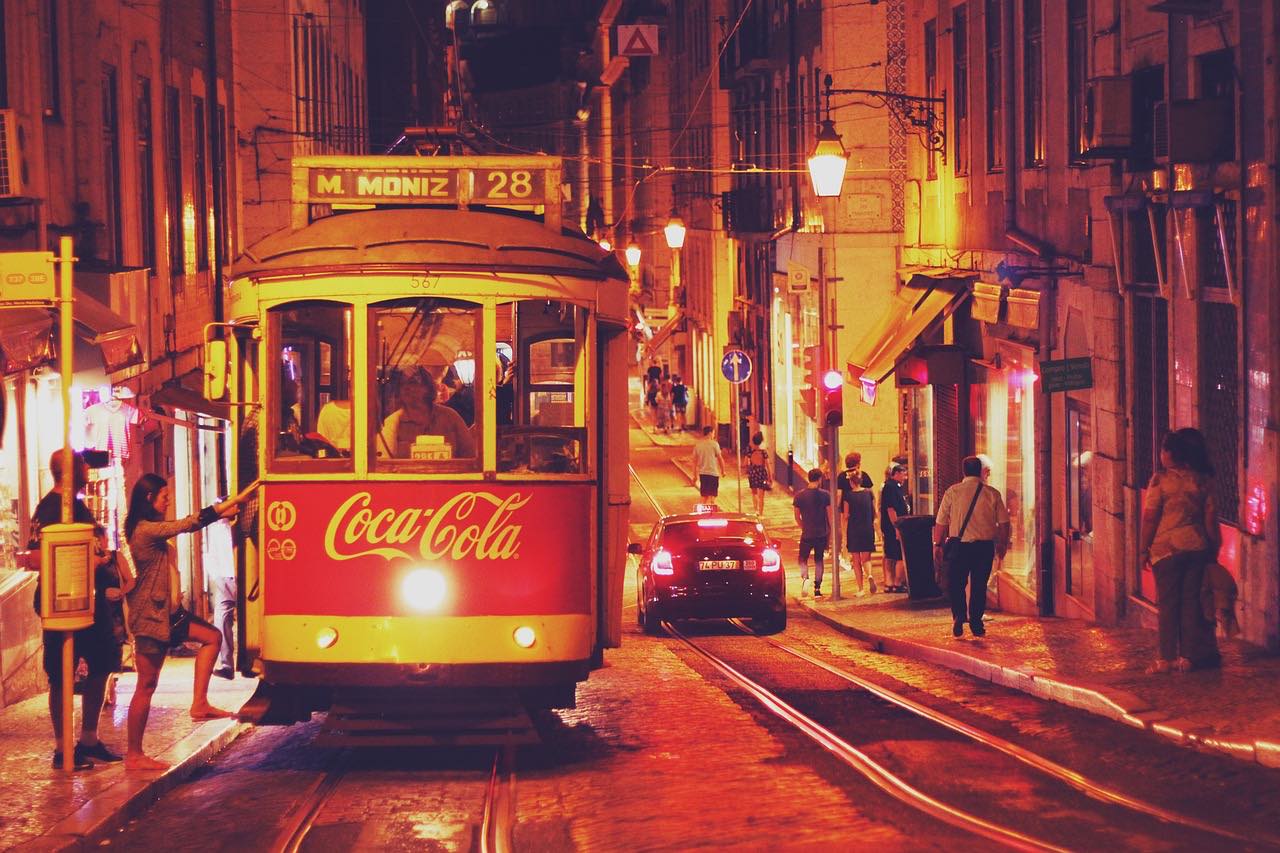 Tram 28 connects some of the most interesting historic quarters: Bairro Alto, Alfama, Graça.

Tip: buy a 24 hour metro ticket for just over 4 euros, as it includes not only metro, but also the Santa Justa elevator, funicular railways and all trams and busses.

Built on the highest hill of Lisbon on top of a fortress dating back to 138 B.C., Castelo de São Jorge (St Gorges Castle) offers excellent panoramic views of Lisbon. The castle got its name of St. Gorges after the Christians re-conquered it from the Maures in 1147.

Mosteiro dos Jerónimos (Monastery of Jerónimos) is dedicated to St. Jerome, patron saint of sailors due to its placement in Belem, where Vasco da Gama returned from his trip to India. You can find his grave inside the church. Wonderful architecture. Make sure you look at the carved details of the stone columns. 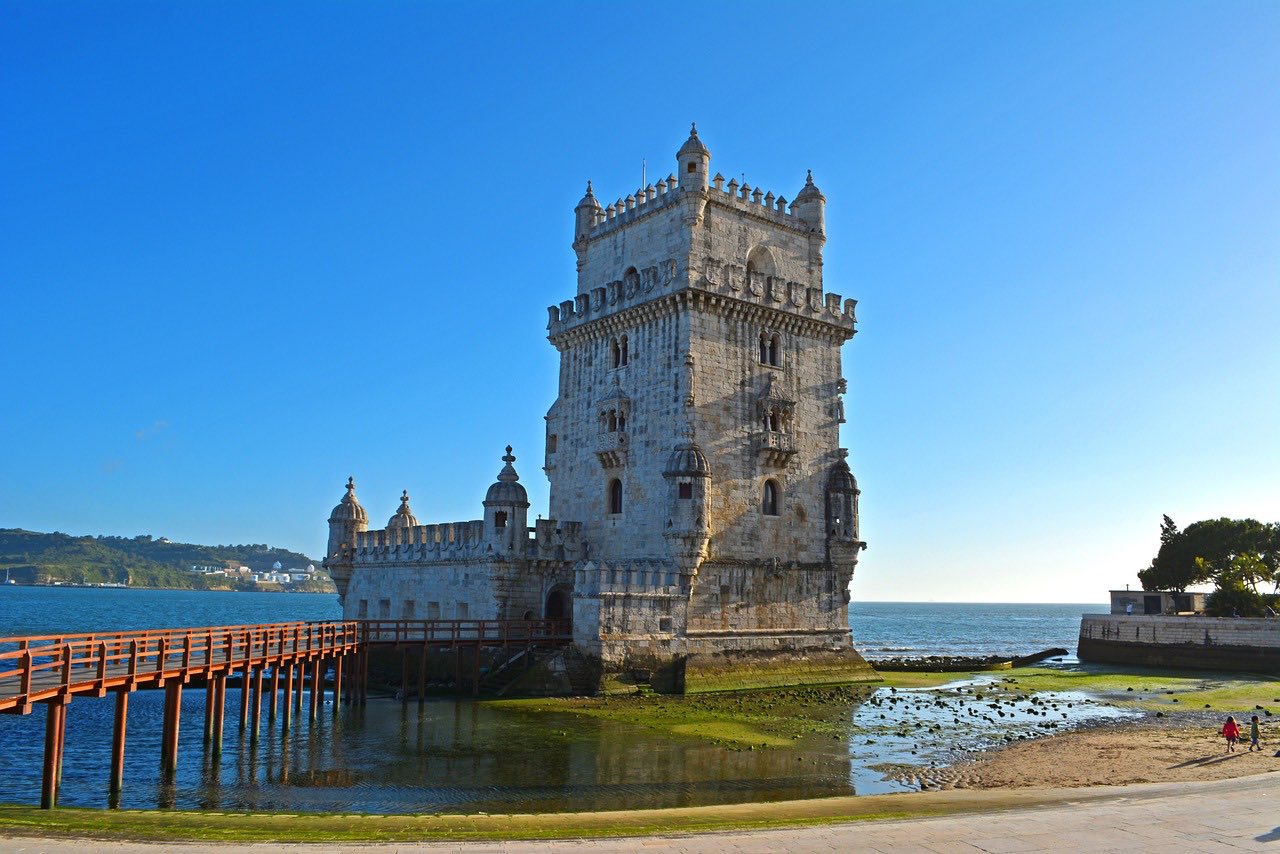 One of the fortresses guarding the maritime entrance to Lisbon via the river Tagus (Rio Tejo). Built in 1515 during the Golden Age of Portuguese discovery of the World. Great views from the top, if you don’t mind climbing narrow streets hardly allowing for people to pass in both directions. 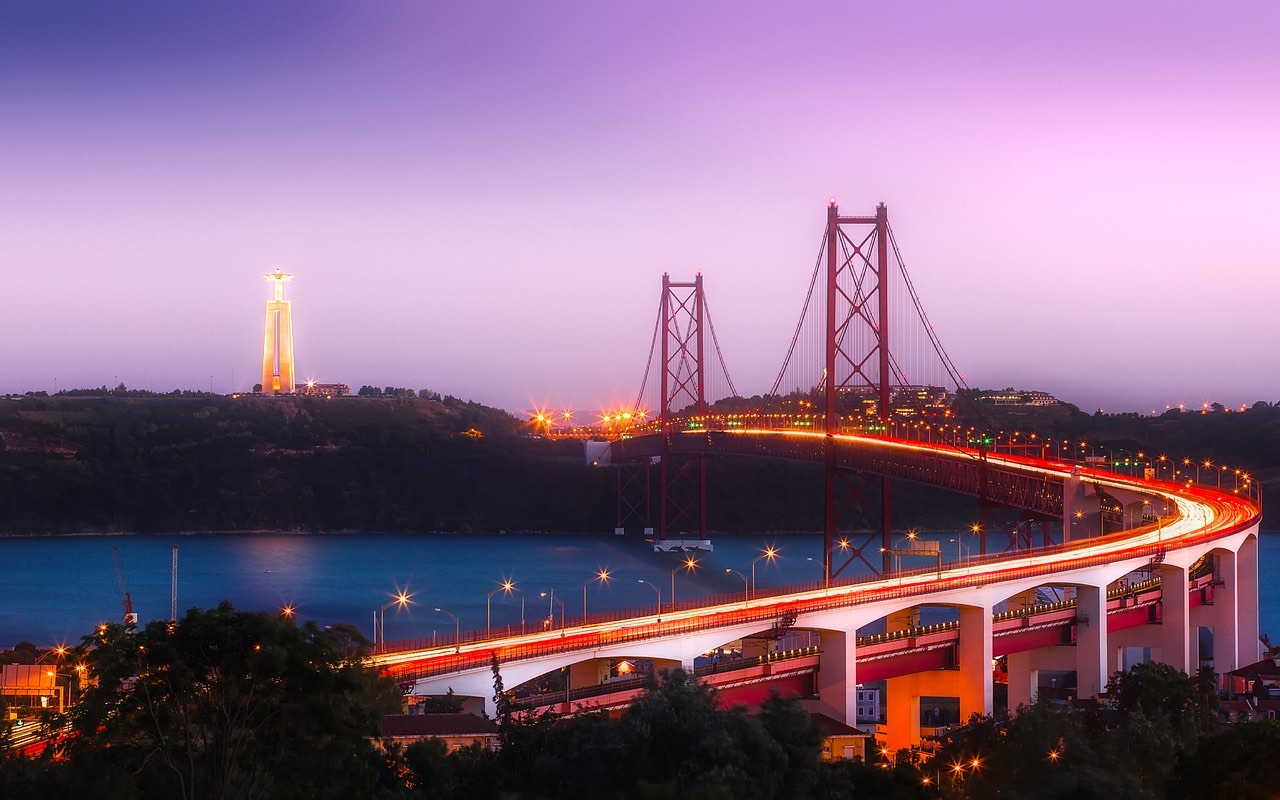 25th April Bridge (great views from Cristo Rei statue, the Castle of St. George and the streets of Belem) was built during the Salazar’s reign and was originally called Ponte Salazar. It was built by the same engineers who built the famous San Francisco Bridge and, although the two bridges are similar, they are not the identical replicas of each other. When it was built in 1966, it was the longest bridge in Europe, the title now belonging to Vasco da Gama Bridge, on the other side of Lisbon (best view from Vasco da Gama Tower).

Cristo Rei statue was built in 1959 after the famous Christ the Redeemer statue in Rio de Janeiro. It is over 200 meters tall, with an observation tower at 184 meters, giving impressive views of the 25th April Bridge, Lisbon and the River Tagus. 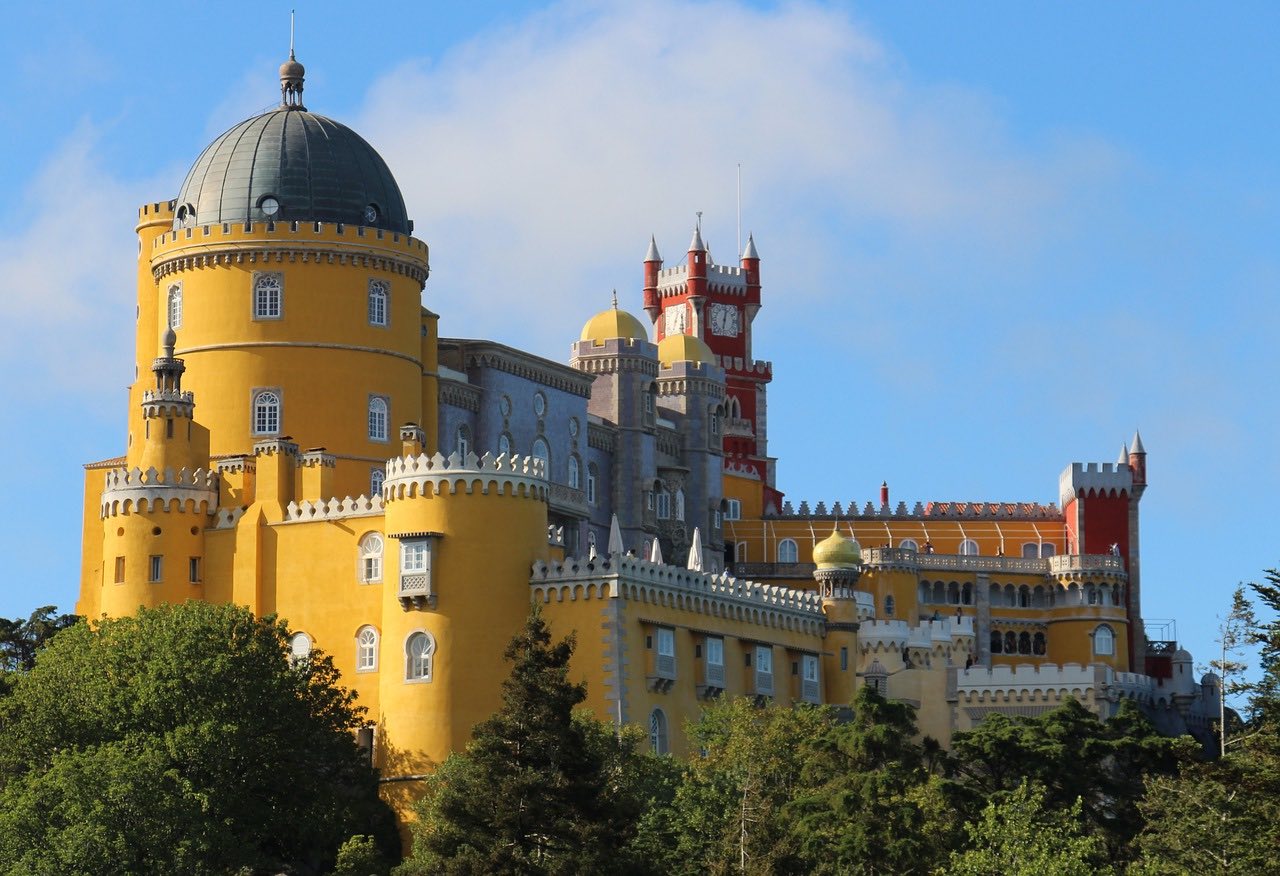 At less than an hour by train from Lisbon, Sintra is a must for any visitor to Lisbon. The town and its surrounding are full of beautiful palaces, as this is where the royal summer residence was. Do not miss the Palácio Nacional de Sintra (National Palace of Sintra), with its two massive chimneys in the old kitchen, reminding one of a factory, Quinta da Regaleira, a surreal palace and gardens and Palácio da Pena (Pena Palace), up on the hill. Watch out for the price of Palácio da Pena: 11 euros for the palace and the gardens, 4.50 euros for the bus from Sintra to Pena and 2 euros for the (optional) train from the gardens entrance to the actual palace. On the way to Sintra, the train stops in Queluz, with Palácio Nacional e Jardins de Queluz (Palace of Queluz) definitely worth a visit. Note the contrast between the elegant palace and the run-down city on the way to it from the train station.

The Time Out Guide to Lisbon is a fact-packed chronicle of everything Lisbon. It comes with a pull-out map too.