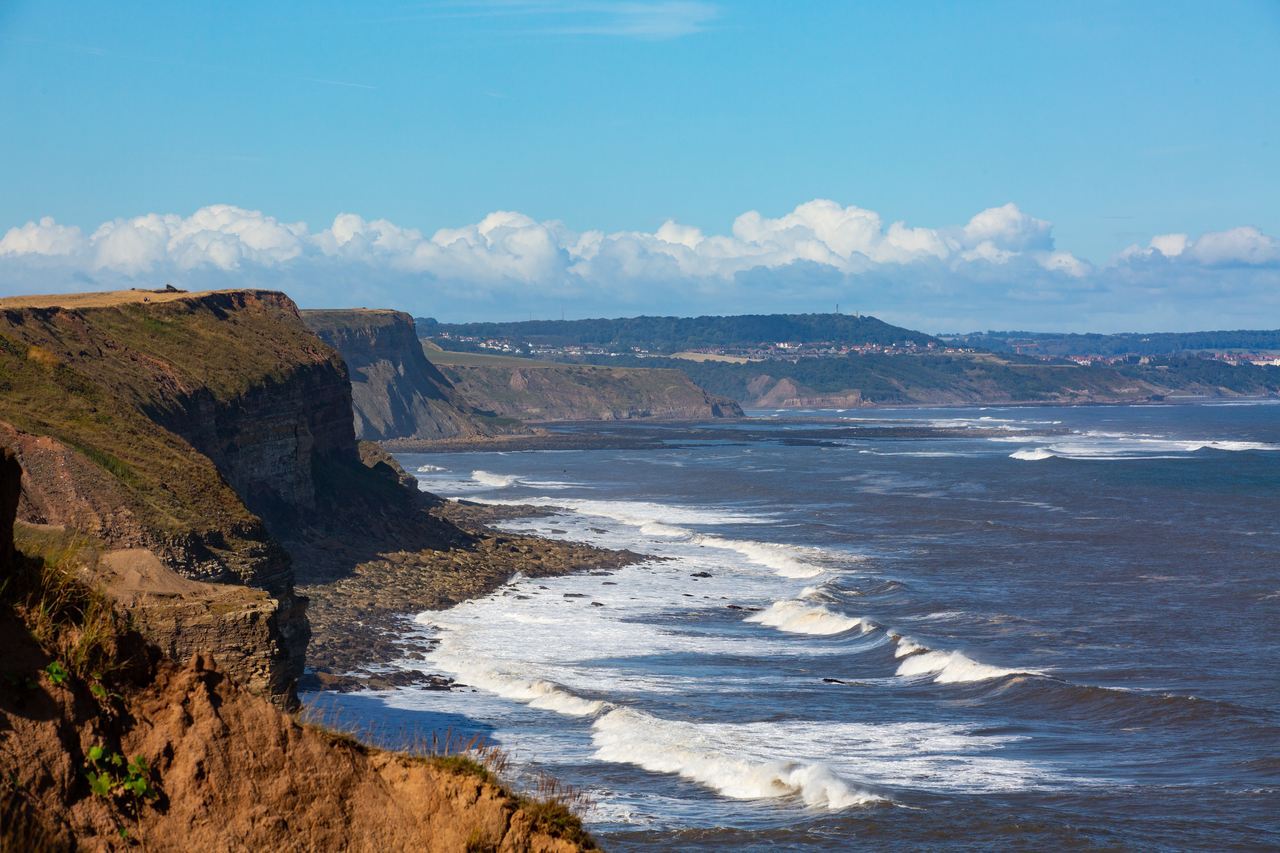 With the ban on foreign travel, British seaside resorts are fast becoming the only place to go. I was In Scarborough over 30 years ago, when it was rather rundown, and I’m pleased to see it has undergone some sort of rebirth.

The terraces overlooking the sea have been spruced up and the gardens by the sea are immaculate. The harbour still has a smattering of fishing boats ensuring that the fish and chips here are some of the freshest and the theatre has a new Alan Ayckbourn play.

The weather outlook for the next few days is set fair … as it would be in Scarborough. 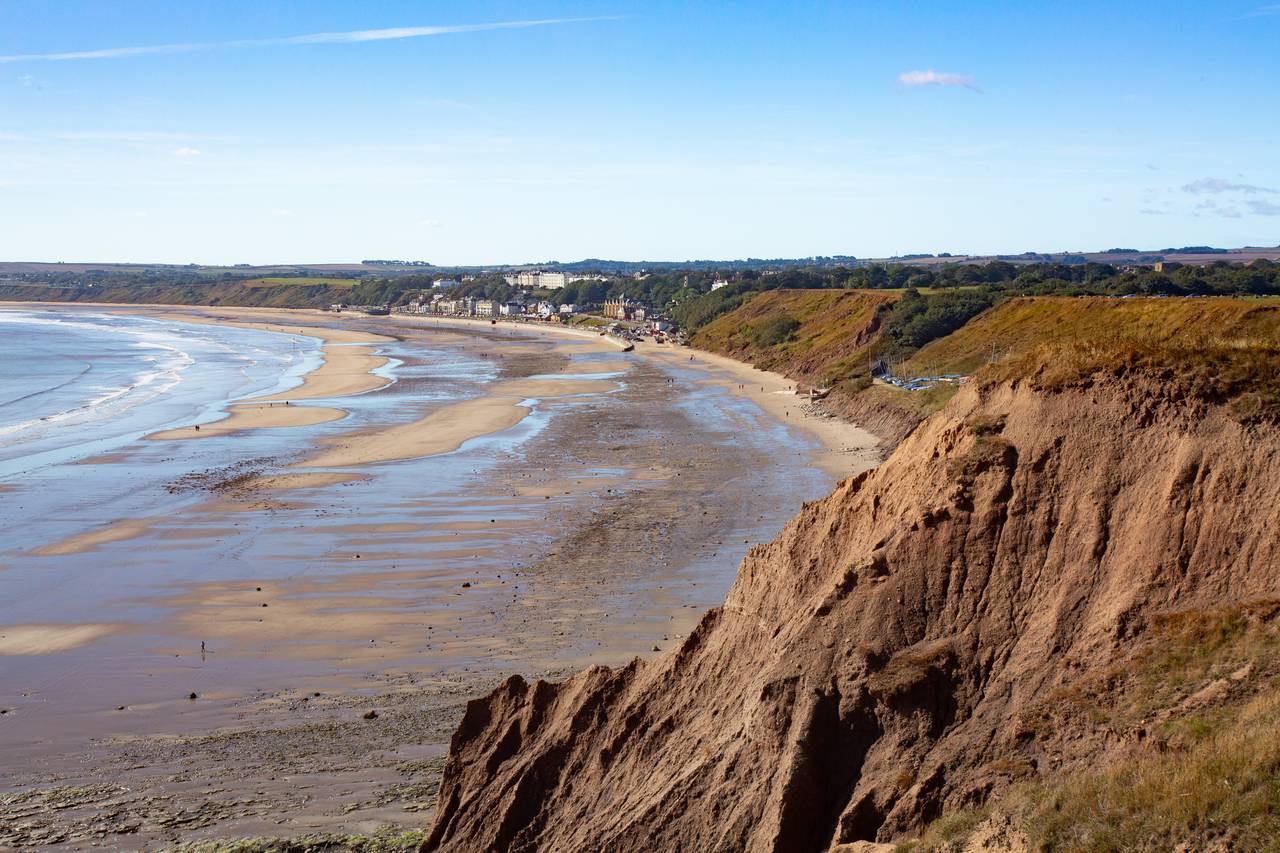 It’s a gorgeous sunny day when I arrive, perfect for hiking down the coast to Filey. This is the last leg of the Cleveland Way, a 100 plus mile trail that starts north of here in Helmsley. I set out along the prom at South Bay before climbing up onto Wheatcroft Cliff. 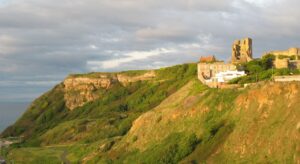 Looking back, Scarborough’s castle dominates the port and some brave souls are braving the icy North Sea. I carry on along the cliffs, where signs warn not to get too close to the edge, through pleasant woodland, skirting the odd caravan site.

It’s an easy walk and, getting closer to Filey, there’s a rocket launcher memorial. It was used for practising firing lifebelts when rescuing stricken seafarers. The Cleveland Way come to an end at Filey Brigg, the long narrow peninsular that juts into the bay just north of the town.

The Romans were here and a few earthworks are the only remains of their signal station. I walk past them to the end of the Brigg and scramble down onto the rocks below. Fishermen are out in force and it’s exhilarating to be surrounded by water on three sides.

Since it’s low tide I’m able to follow the shoreline path to the wide expanse of sand that is Filey beach. A slipway leads up to the attractive old fishing port, now home to cafes and fish and chip shops, and I catch the bus back to Scarborough. 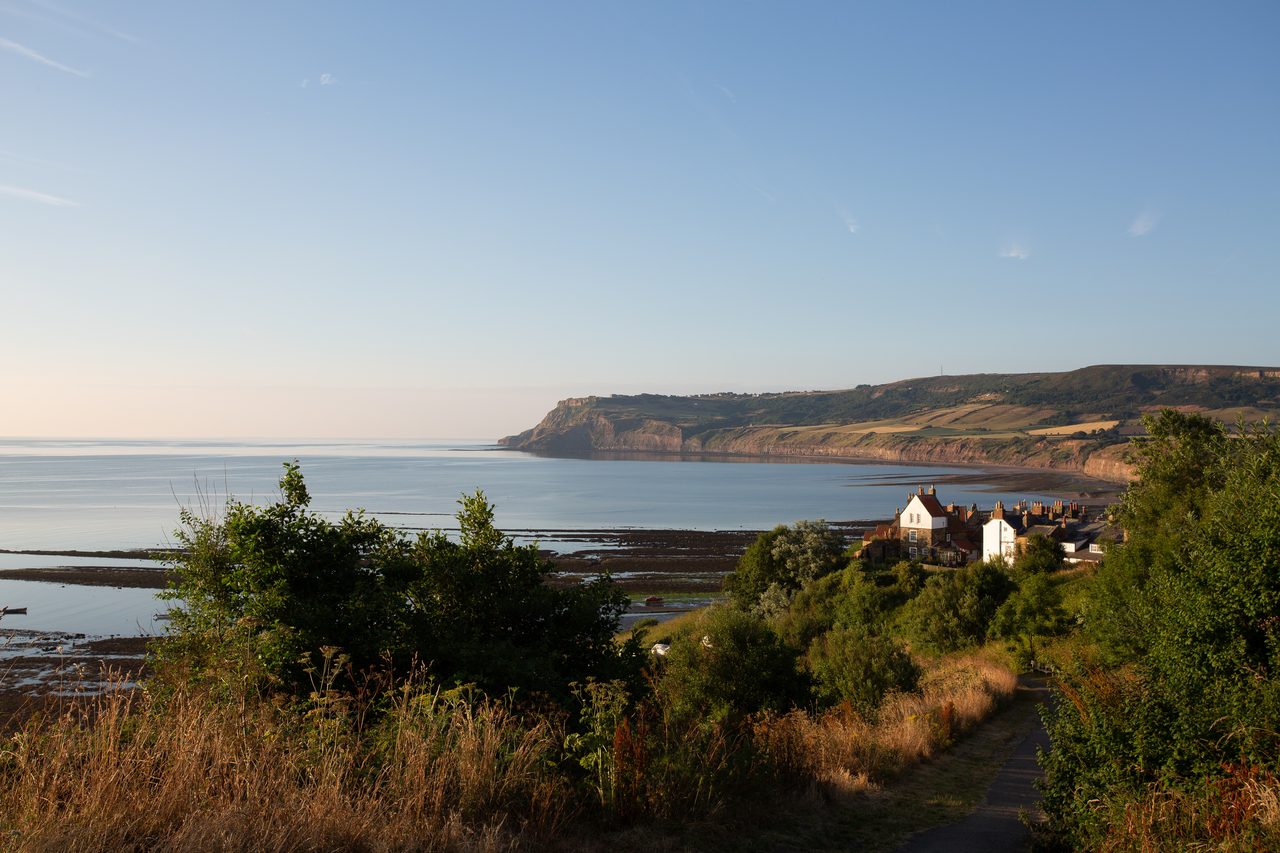 The forecast predicts rain later so I start early. I’m taking the Cleveland Way once more, but this time in the opposite direction. Crossing the town, I pass rows of multi-coloured beach huts on North Bay before climbing up to the cliff path.

The walking is harder today, the gradients steeper, often dropping down to cross streams running through wooded valleys. After three hours I pass the remains of an old radar station, part of a WW2 early warning system, before arriving in Ravenscar.

When the Scarborough to Whitby railway was built in 1885, someone had the bright idea of creating a new resort here.

Unfortunately, they forgot that it’s tricky to get to the sea, there’s no sandy beach and the howling wind isn’t particularly pleasant. Still, the plan was only abandoned in 1913 but all that remains are a few houses and the imposing Raven Hall Hotel.

From here I pass the remnants of another scheme, this time a success story. Alum, used for fixing dye, was mined here from the 1650’s until the 1800’s, and ruins of the works and jetties can still be seen. The path descends to the beach and climbs again to Boggle Hole, home to an isolated Youth Hostel, before continuing along the cliffs.

Robin Hood’s Bay comes into view and I make my way down to the water’s edge and celebrate with a pint in the Bay Hotel. This is also the terminus for the 192 mile Coast to Coast Walk, and there are a couple of weary veterans enjoying their well-earned refreshment.

In the past, the village made its money from smuggling but now the atmospheric narrow lanes are lined with craft shops and cafes and restaurants. It’s deservedly popular and I walk up the hill to catch the bus back to Scarborough.

It’s a grey day with light drizzle, so I decide to set out again toward Ravenscar, this time along the old railway line. It’s known as the cinder track, as cinders were used for ballast rather than stone chipping. Sainsbury’s car park is the unlikely start of the walk and it leads through housing estates before getting to the countryside.

The line closed in 1965 but the stations are still standing.  From Cloughton, it’s a gradual climb, passing the platforms at Hayburn Wyke, and then though Staintondale Station, now a private house, to Ravenscar At 192m, this is the highest point on the line, and that’s my cue to turn around and follow the coastal path back to Scarborough.

The wind is whipping up the sea into breakers crashing onto the rocks and there’s little shelter on the cliffs. Fortunately, there’s some respite at the delightful wooded bay of Hayburn Wyke, with its double waterfalls, perfect for a quick snack. It’s still a long haul to Scarborough and it’s a relief to see the castle finally appearing in the distance.  Even better are the tea and cakes when I arrive back at the hotel.

Only a few hours for walking today, as I’m travelling back to London later, but I can’t leave without seeing Whitby.  It’s an hour by bus and when I arrive I’m surprised to see a steam train ready to depart from the station. It’s from the North Yorkshire Moors Railway which extends some of its steam services here. 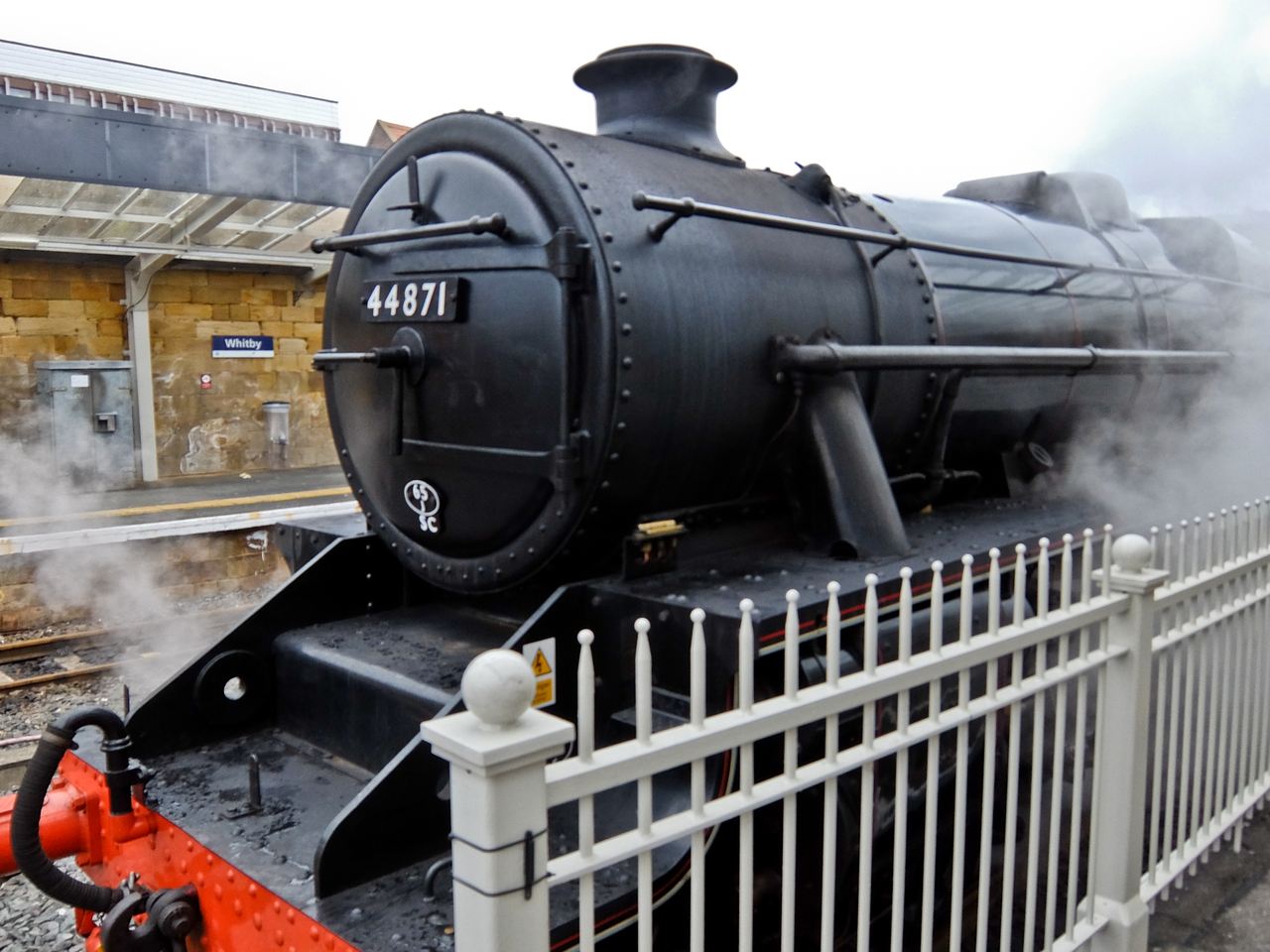 A swing bridge over the River Esk leads me into the old town and its narrow streets and I’m soon climbing the famous 199 steps up to St. Mary’s Church and the ruined abbey. The churchyard and the atmospheric ruins inspired Bram Stoker to write Dracula when he stayed here.

There’s a stunning view from the top with the estuary and harbour spread out below but there’s time to linger. After traversing another caravan site. I’m soon in stunning coastal scenery. This is Saltwick Bay, the attractive beach protected on each side by two shale outcrops.

Colonies of seabirds populate the cliffs and distinctive Whitby Lighthouse warns ships of the hazards below. The walking is easy and Robin Hood’s Bay is soon in reach. I vow to have one last pint at the Bay Hotel before taking the bus back to Scarborough and then the train home.

GET THERE: LNER runs rail services between London Kings Cross and Scarborough via York. Bus services are frequent in the region.

MORE INFO: Discover Yorkshire Coast has information about the area.

STAY: The Bike and Boot Inn is a newly renovated boutique hotel in South Bay with an excellent restaurant. It’s designed for active guests and serves free tea and cakes in the afternoon plus free movies in the evening. Rooms cost from £65.

EAT: The Golden Grid Fish Restaurant by the harbour serves more than the freshest fish and chips and its menu includes oysters, lobster and scallops.