Home WorldEuropeAustria An E-Bike Tour of Salzburg and its Lakes, Austria
AustriaTravel Articles

The beautiful Baroque city of Salzburg is forever associated with the epic film Sound of Music, but its history goes back long before the Von Trapp family.

It’s the centre of the “Salzkammergut”, literally the land of salt, since the glistening white stuff has been mined here since 800BC. In the 19th century the healing properties of the saline waters led to the development of high end spa resorts, but these days the major draws are the stunning lakes and mountains. 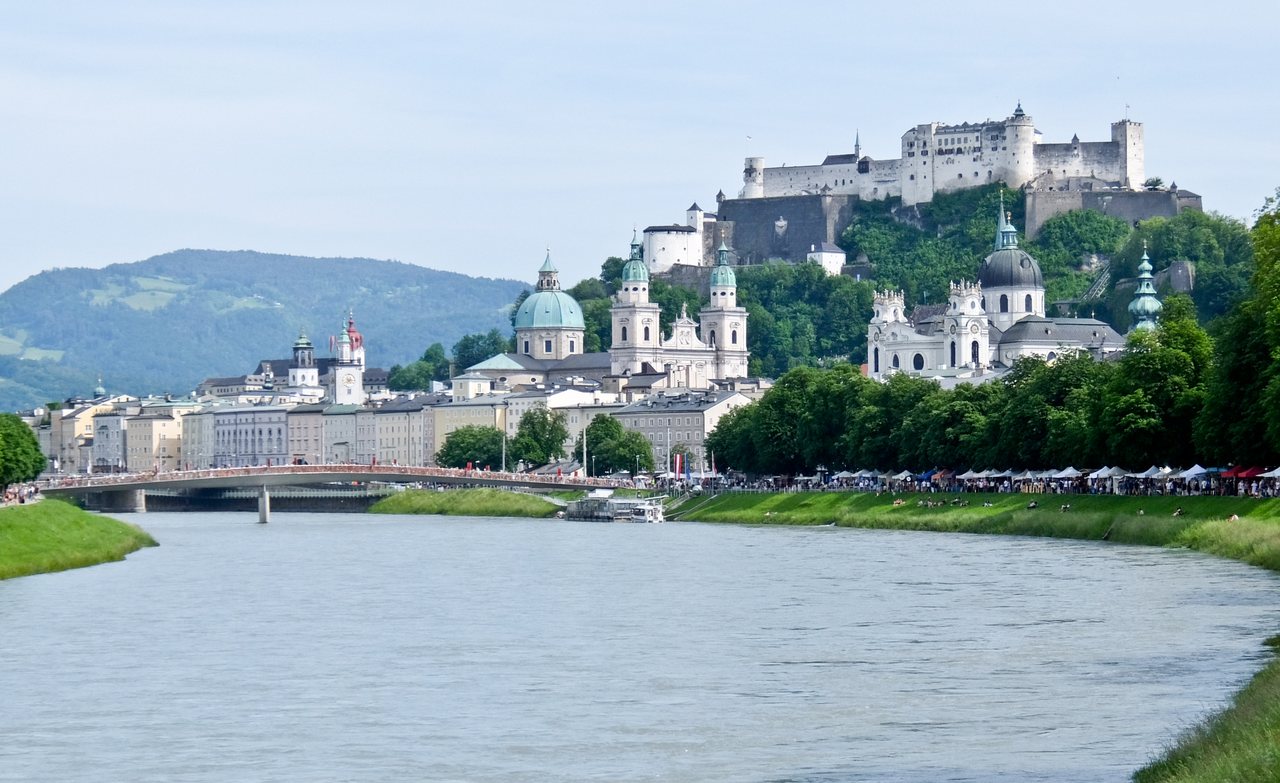 I’m all set to explore the region on a traditional cycle but looking at the map and examining the contours I decide that it’s far easier to hire an e-bike. Now I’ve only used these for the odd day’s outing so am slightly sceptical about how they would work over a week but my fears prove unfounded. The latest batteries easily manage over 100kms on one charge and I never run out of juice. Of course I carry the charger, just in case.

It’s a bright sunny day as I leave Salzburg following the River Salzach to the town of Oberndorf where the Christmas carol, Silent Night was composed in 1818. There’s a small chapel here, built on the sight of the original church and also a museum where you can listen to the carol in many different translations.

I leave the river and continue through gently rolling hills, glad to have the assistance of electricity. Around lunchtime I spot my first lake, the small Grabensee, before plunging downhill to the much larger Obertrummersee.  I have a quick dip here before settling for the night at Seeham, about half way along. 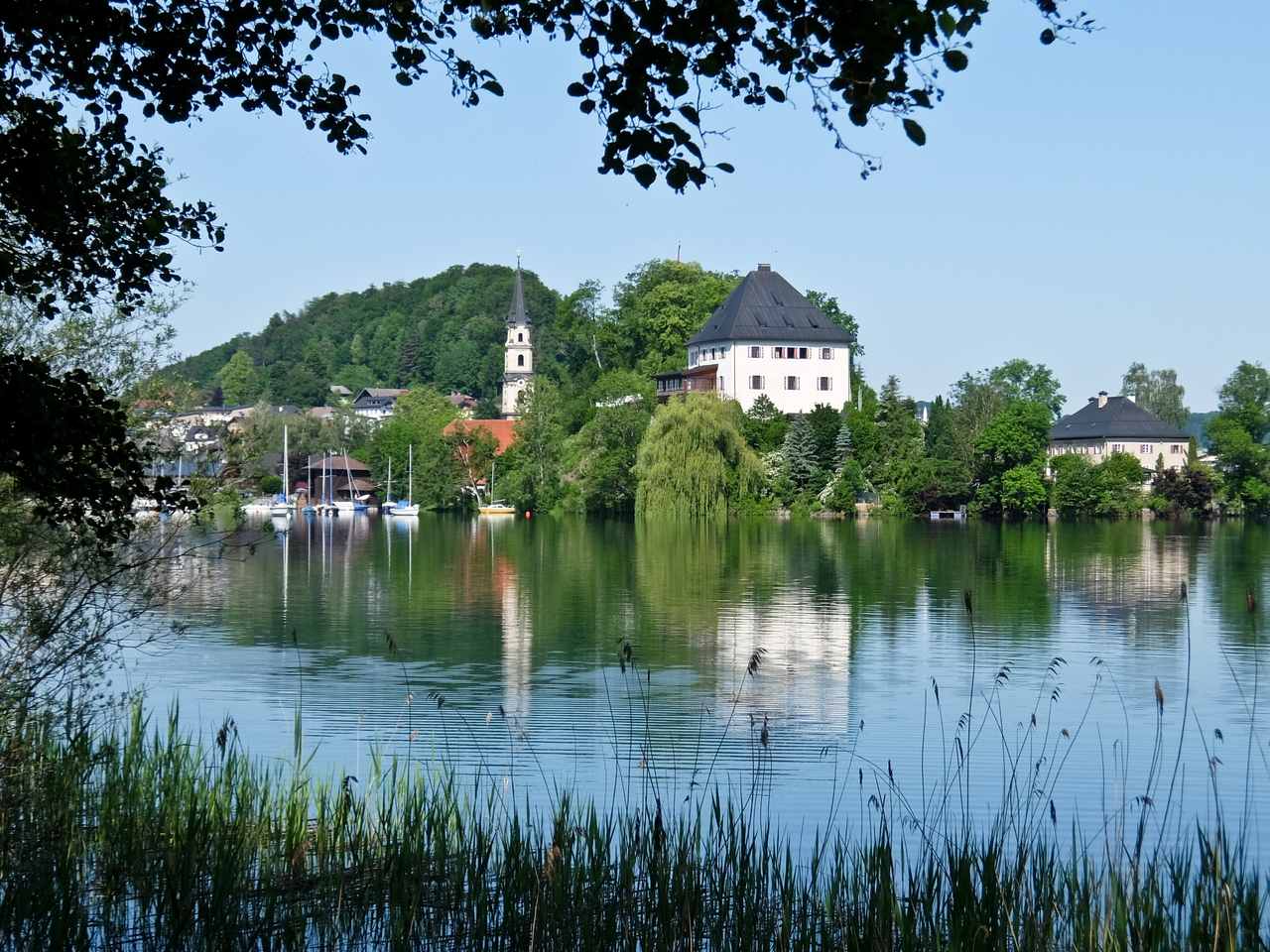 I slightly backtrack to reach my third lake, the Mattsee, and stop to examine the huge gothic abbey church in the town of the same name. I follow the lake for a mile or so then climb steeply through the forest before emerging into open country where farmers are cutting the hay.

I pass through a succession of tiny villages and soon on my left is the Irrsee, a long thin lake which I follow for its length.

Another short climb and I drop down to the town on Mondsee at the head of the lake of the same name. This is a sizeable town, with the twin towered church of St Michael dominating the market square. It was also the location for the wedding scene in the Sound of Music.

An early start today as a big distance to cover. The first 16km follows the banks of the Mondsee then reaches the adjoining Attersee. At 20km long, this is the largest of the Salzkammergut lakes and I cycle all of it, rewarded with good mountain views with the clouds touching the tops. I turn off at Kammer and climb gradually into the forest.

Villages here are often not much more than a single farm and the nearby motorway has taken away all the traffic. Finally I arrive at the Traunsee, my third lake of the day, and cycle south to the attractive village of Traunkirchen. It’s perched on a promontory and across the lake is the Traunstein, the highest mountain in the area at 1,691m.

A bit of cheating this morning as I only cycle for 20 minutes before boarding a train from Ebensee. Apparently the road ahead is full of traffic and fairly unpleasant, so my bike and I ride the rails for an hour to Bad Aussee. This is a spa town and the jumping off point for five lakes.

My first is the Grundlsee, dominated by magnificent snow-capped peaks and the largest in Styria. At Gossl-Wienern, at the end of the lake, I take steep forest path then descend to the Toplitzee, a smaller patch of water.

I then retrace my steps and cross to the Altausseer See, another small lake full of fish. It’s then back to Bad Aussee and a steep climb up to 560m before descending to Obertraun on the Hallstättersee. 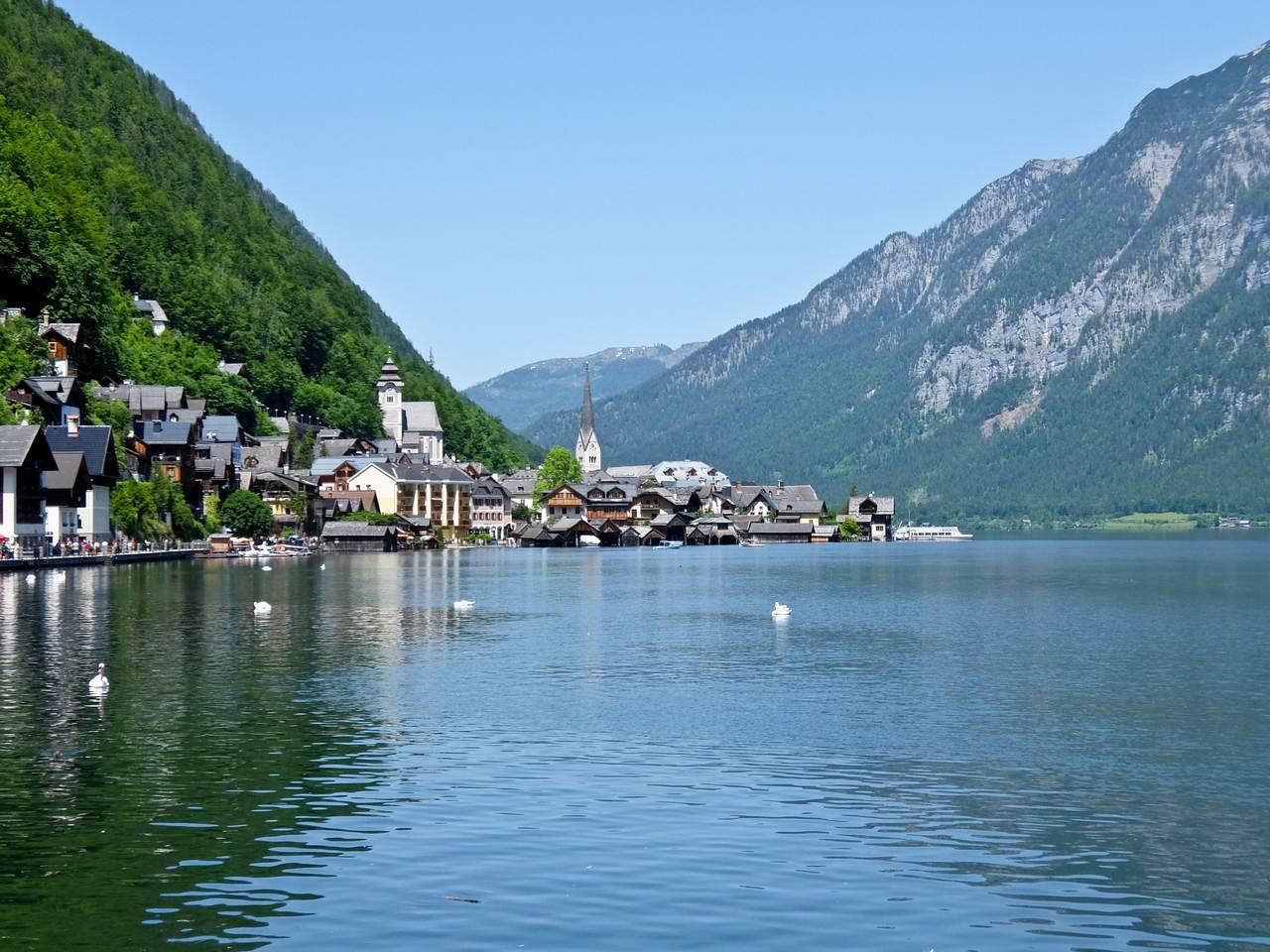 Salt mine village of Hallstaat

Surrounded by towering mountains this is the most impressive of all the Salzkammergut’s lakes with crowds of tourists to prove it. They gather in the UNESCO World Heritage, salt mine village of Hallstaat, half way up the lake, and although it’s undeniably pretty I can’t wait to get back to the peace and quiet.

After I reach the top of the lake I’m soon in the market town of Bad Goisern. There are fewer tourists here, but unfortunately an Austrian folk band starts playing just below my hotel window.

It’s overcast as I follow the Traun River to arrive at Bad Ischl where Kaiser Franz Joseph was born and spent all his summers until 1914. During his reign it became the Hapsburg summer capital with grand buildings to match and of course a huge palace. It’s still Austria’s most famous spa town and, on a Sunday morning, people are promenading in their finery.

I set off back into the country before arriving at Strobl at the foot of my penultimate lake, the fifteen kilometre long Wolfgangsee. I’m staying about half way up, and across the water is the town of St Wolfgang, nestling on the shores at the foot of the mountains. I can’t resist cycling to take a look but it’s full of tourists and my attempt to go further is blocked by a sign prohibiting cyclists. I content myself by taking a dip in the icy water near my hotel. 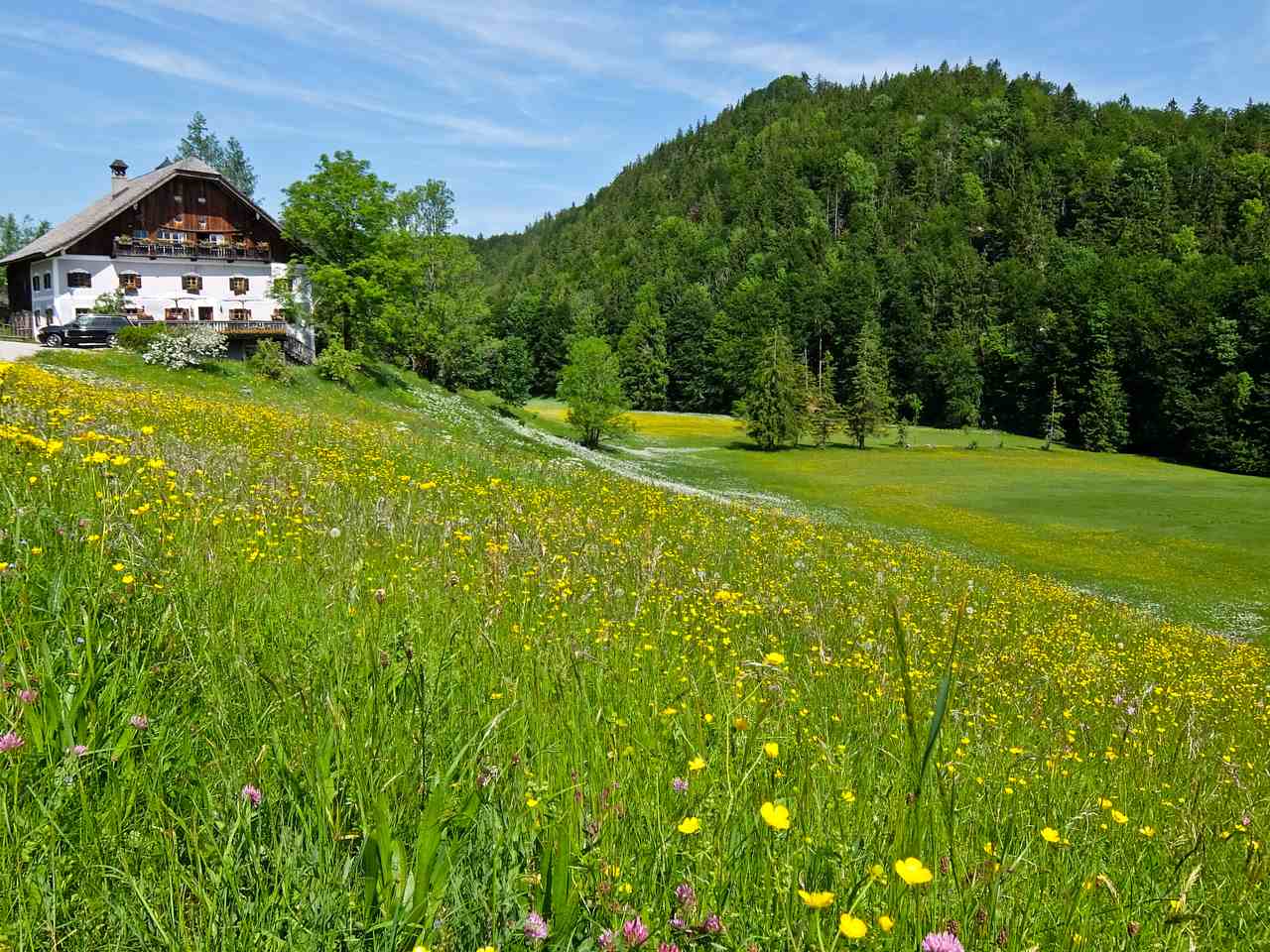 Some walking today to avoid a congested road. I leave my bike at St. Gilgen at the top of the lake and hike steeply uphill through forest and wildflowers for around an hour. They’ve transported my bike to top and then it’s a glorious downhill through pretty farmland with snow-capped mountains in the distance.

I pass the Hintersee, my final small lake, before steeply climbing cross county then descending for the final stretch to Salzburg. I know I’m close when I see the castle looming out of the haze and in no time I’m back on the Salzach River where I started.

This cycle tour is an excellent way to get to know the region and has the added benefit of two nights in Salzburg which gives you ample time to explore. I’m glad I chose the e-bike option as, although there are no major hills and I could manage it on a normal bike, in the heat of summer the electrical assistance really makes a difference. Of course you still have to pedal and some reports say you use as much energy as on a normal bike. I’m not sure about that but it certainly makes cycling more enjoyable.

Lumix holiday photo competition: And the winner is….