Bergamo, Lombardy: Six months on from the COVID 19 lockdown

Before the virus hit northern Italy the prosperous city of Bergamo was enjoying a tourist boom. Its airport (Orio del Serio, branded as ‘Milan Bergamo’) is Ryanair’s biggest Italian hub, serving around 90 cities in Europe and beyond.

Although overshadowed by the more famous cities of northern Italy, Bergamo has a majestic setting high on a hill and a magnificent medieval town. Its proximity to the airport (6km) made it perfect for a city break, but the boom came to an abrupt end in the early spring when the city, at the heart of Lombardy, Italy’s worst-hit region, became synonymous with coronavirus.

The wounds are still raw, but the Bergamaschi are resilient and there are signs of hope.

The wounds are still raw, but the Bergamaschi are resilient and there are signs of hope.  Although like many European countries, Italy has seen a recent rise in infections, most travellers within Europe, including those from the UK, can travel freely to and from the country, without quarantining upon arrival or on returning home.

Bergamo’s hospital of Papa Giovanni XXIII currently has no COVID cases, hotels and restaurants are gradually reopening and the city, along with nearby Brescia, has been nominated as Italy’s cultural capital for 2023.

Sadly though, this fine walled city, with its beautiful mountain setting, its culture and gastronomy, is still being shunned by tourists. This of course has its plus points for those few visitors (myself included) who can make the most of peaceful piazzas, quiet cobbled streets and historic sights without the crowds.

Venetian Lion of St Mark and other superb landmarks 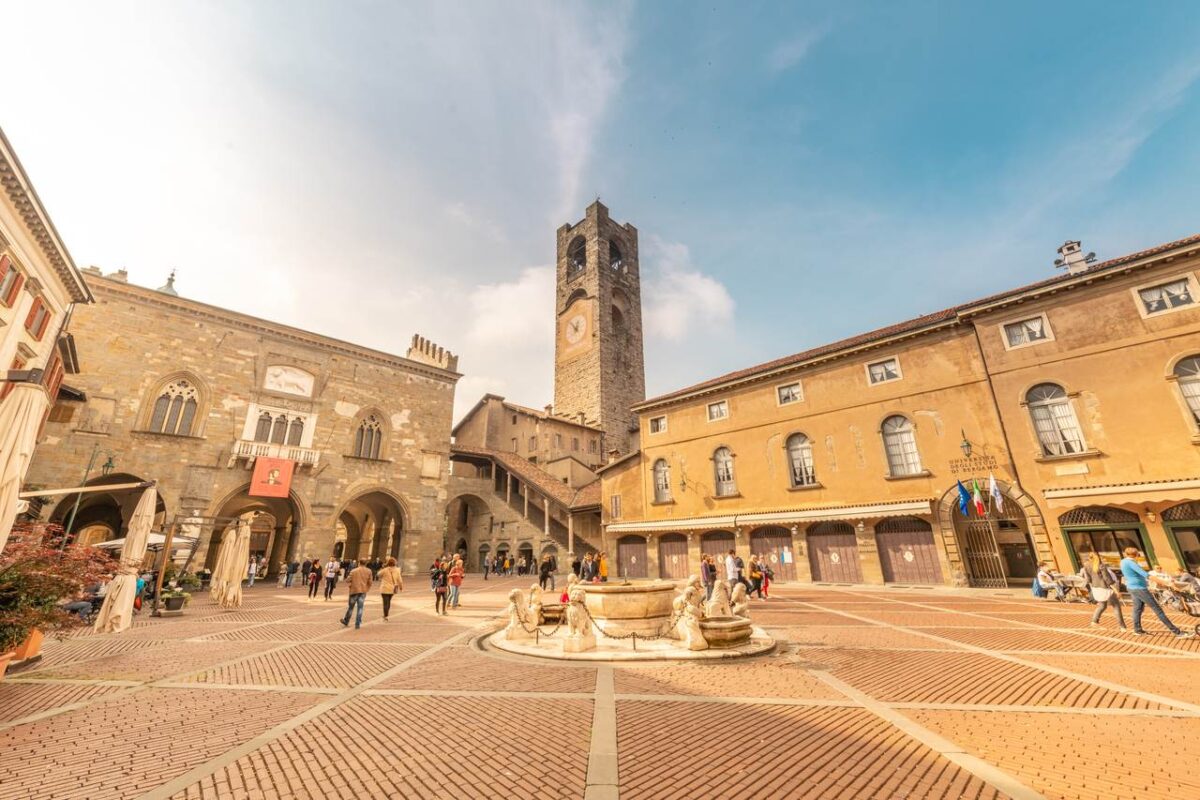 As the only visitor turning up to the Saturday morning guided tour in English, I have my own personal guide to the Città Alta (Upper city). Roberto explains how some 400 years of Venetian rule have left their mark on the town’s graceful architecture and points out the Venetian Lion of St Mark, conspicuously sculpted on the Palazzo Ragione in the Piazza Vecchia. The square is a glorious showpiece of medieval and Renaissance monuments, surrounding an elegant marble fountain.

The medieval Civic Tower known as the Campanone has birds’ eye views from the top, which is reached by lift (or 230 steps). The bell is the biggest in Lombardy and chimes 100 times every night at 10 pm, recalling the curfew under the Venetians. 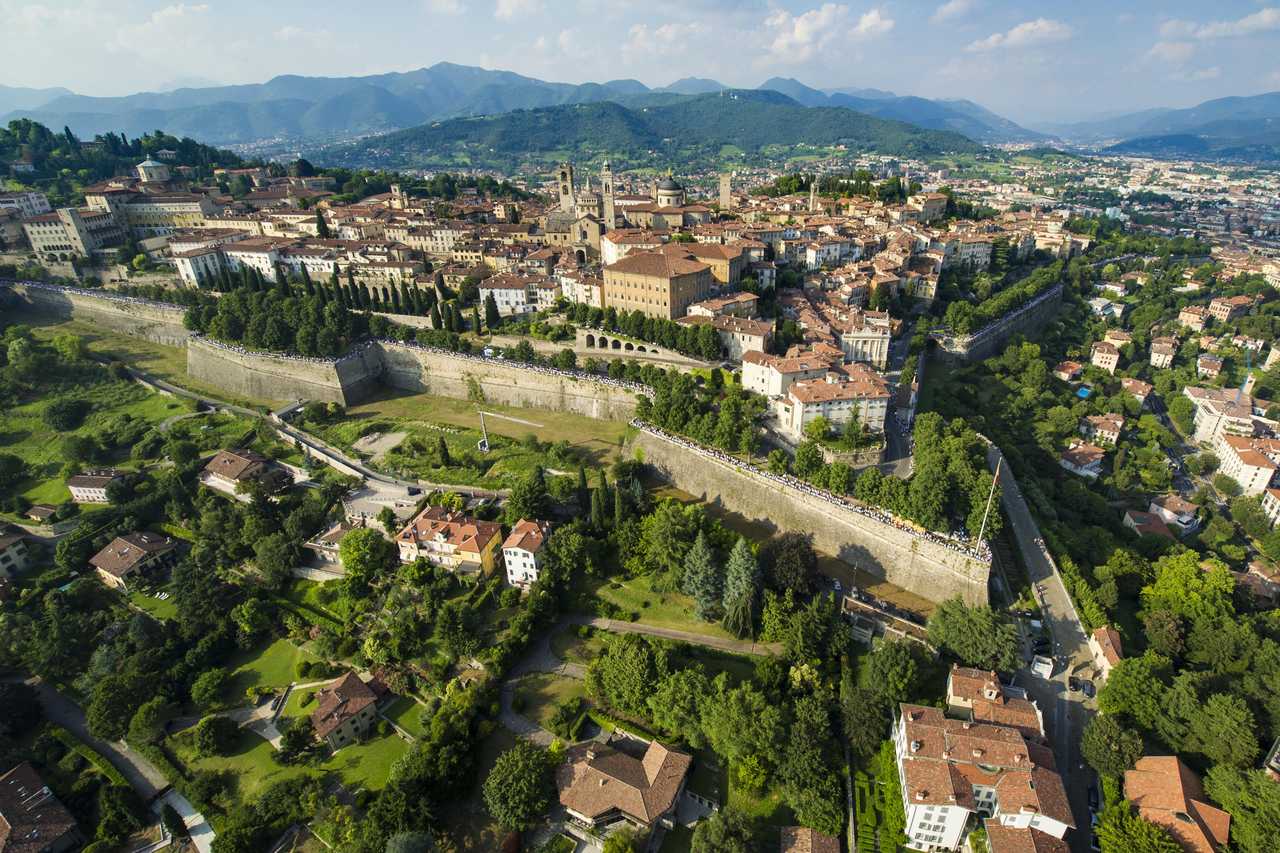 Three of the prime sights are conveniently grouped together in the adjacent Piazza del Duomo: the Cathedral, with a sumptuous Baroque interior, the fine Romanesque Basilica of Santa Maria Maggiore, with an interior explosion of gilt, stuccowork and paintings and the exquisite Renaissance Colleoni Chapel, a mausoleum for Bartolomeo Colleoni, a rich Venetian condottiere (mercenary).  On the railings attention focuses on Colleoni’s coat of arms, comprising three gleaming testicles (coglioni) – the third it seems endowed by mother nature.  Roberto explains that rubbing the crest brings good luck – and adds that Bergamo needs it.

We head to La Rocca, high point of the city, with views of the Bergamo Alps to the north and the Po valley to the south, then it’s down to medieval Via Gombito to salivate over gastronomic food shops.

It’s time for a break and the chance to sample Bergamo’s speciality cake: the wickedly calorific polenta e oséi.  It’s not made of polenta or wild birds (oséi) but of sponge, with chocolate and buttercream, coated in marzipan and topped by chocolate birds.  With renewed energy, I walk the 6km panoramic circuit of Bergamo’s Venetian walls, which were awarded Unesco World Heritage status in 2017.

City of art and music

From Piazza delle Scarpe (Shoe Square) I hop on the bright red funicular linking the upper and lower cities. It is an efficient system which has operated for over 120 years. The Città Bassa (Lower City) was laid out in the 1920s with stately tree-lined avenues, porticoes and piazzas.

But my main focus is the Accademia Carrara, one of Italy’s finest provincial art museums which takes you through five centuries of Italian art and includes some exquisite portraits.

A whole room is devoted to Giovanni Battista Moroni from Bergamo, whose portraits are remarkable for their psychological insight. Also linked with Bergamo is Lorenzo Lotto who resided here for 12 years, painting portraits of the local bourgeoisie along with altarpieces and frescoes for the city’s churches.

Bergamo is proud to be the native city of Gaetano Donizetti (1797-1848), a leading composer of the bel canto opera style. As a child he learnt music in the Basilica of Santa Maria Maggiore, where lessons were provided for young boys from poor families. He is buried in the Basilica and commemorated in the city by a street, a theatre, memorial and a museum. 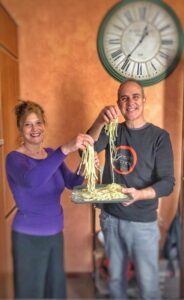 The Bergamaschi have hearty appetites and the Alpine influence can be seen in the rich cheeses, home-made salami and polenta dishes. The favourite pasta is casoncelli, tasty meat-filled ravioli served with a butter, pancetta and sage sauce.  As a fan of this pasta I’m interested in learning to make it from scratch and opt for a private cookery class at Michele’s Kitchen.

Chef Michele is passionate about Italian cuisine and gives cookery lessons on dishes from various regions. 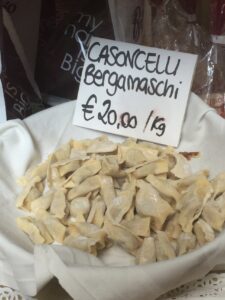 Creating the casoncelli involves chopping, frying and mixing, rolling out and kneading the dough, then filling and sealing the distinctive little parcels. We dine on a sumptuous array of antipasti, followed by our casoncelli, tiramisù and home-made limoncello.   Michele and his wife, Wanda, are welcoming hosts, making guests feel completely at home. Originally from southern Italy, the family retreated to their house in Calabria during the worst of the pandemic.  Now back in Bergamo they are soon to re-open for families or small groups – practising social distancing.

Bergamo’s restaurants have been slowly re-opening

Bergamo’s restaurants have been slowly re-opening.  A favourite among locals is the charming La Colombina just beyond the Sant’Alessandro city gate, a traditional trattoria, producing honest Bergamasque cuisine – and beautiful views from the terrace.  On the way back a stop at Café La Marianna is mandatory for the irresistible stracciatella ice cream. The gelato was invented here in 1961 by using the dark chocolate from unsold Easter eggs.

Where to Stay in Bergamo

Just re-opened is the central Hotel Gombito adjoined to the medieval Gombito Tower.  The first design hotel in the Upper Town, this has 13 comfortable and stylish rooms on 4 floors. 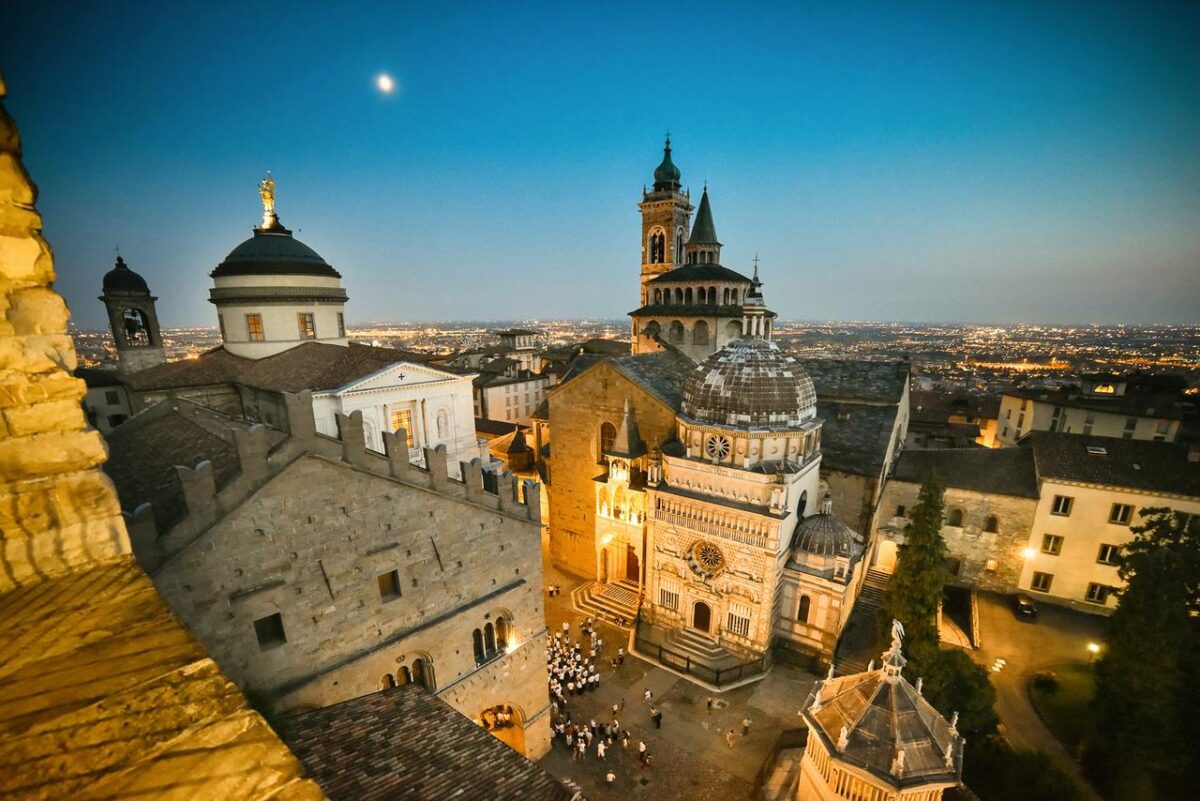 Susie Boulton is sole author of 30 guidebooks, published by mainstream travel publishers including Dorling Kindersley Eyewitness Guides. She contributes articles to national newspapers and magazines and is a member of the British Guild of Travel Writers. Before becoming a travel journalist she studied languages and history of art at Cambridge University.

Want to check which countries have COVID-19 spikes?