Norway: Bergen in winter makes for a spectacular short break.

Bergen is too quaint not to visit, get there in time for Christmas and make it festive.

It’s true, Bergen in the winter months is a tad chilly. Temperatures can plummet to 0 degrees, so, I knew to don my thermals, gloves and hat when I visited in early December.  I only had two days and I had no intention of staying indoors. And certainly not in this most picturesque port city on the west coast of Norway.

I awoke early to find snowflakes falling gently down onto the quaint, cobbled Bergen streets, decorating Mount Fløyen just beyond with snowy icing and topping the zeniths of colourful wooden buildings with blankets of white.

When the snow ebbed completely away, the air was fresh and so I wrapped my gloved hands around a warming hot chocolate I had bought at the Bergen Julemarked or Christmas market in Festplassen in the heart of the city.

White marquees were selling baubles, trinkets, clogs and all sorts of festive fare, while music, the sounds of the Ferris wheel and giggling children filled the ether. I followed my nose to the hotdog stand and though the chilled air blew to redden my cheeks, all seemed not just well in the world, but unquestionably festive.

The best of Bergen though is the city itself, a delight any time of year and surely best discovered on foot. I spent the day just strolling around and absorbing its charm and architecture. 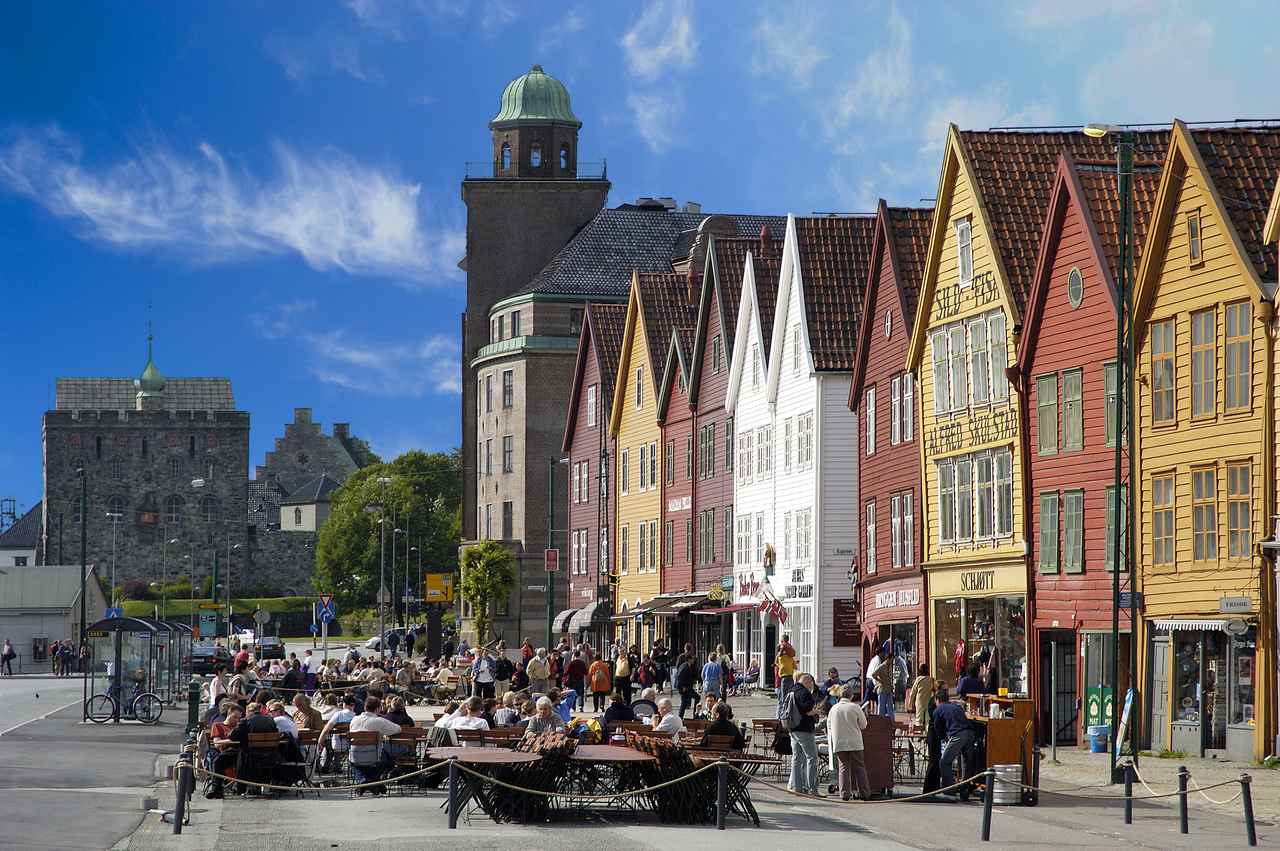 The old warehouses in the historic town of Bryggen, a harbour district, is one of North Europe’s oldest port cities. The area developed as a trading centre in the 12th century when Bergen was the main port of export for dried fish and fish oil.  The Hanseatic League took it over in 1350 and it effectively became separate from the main city.

Though burned to the ground several times the wooden houses were rebuilt with tools of yore, in the same way, to stay authentic – a UNESCO diktat. It seemed a little rickety, with nooks and crannies, and one home tilting slightly to the right yet business is still conducted by the plethora of shops and restaurants that have taken root in those wooden rooms. 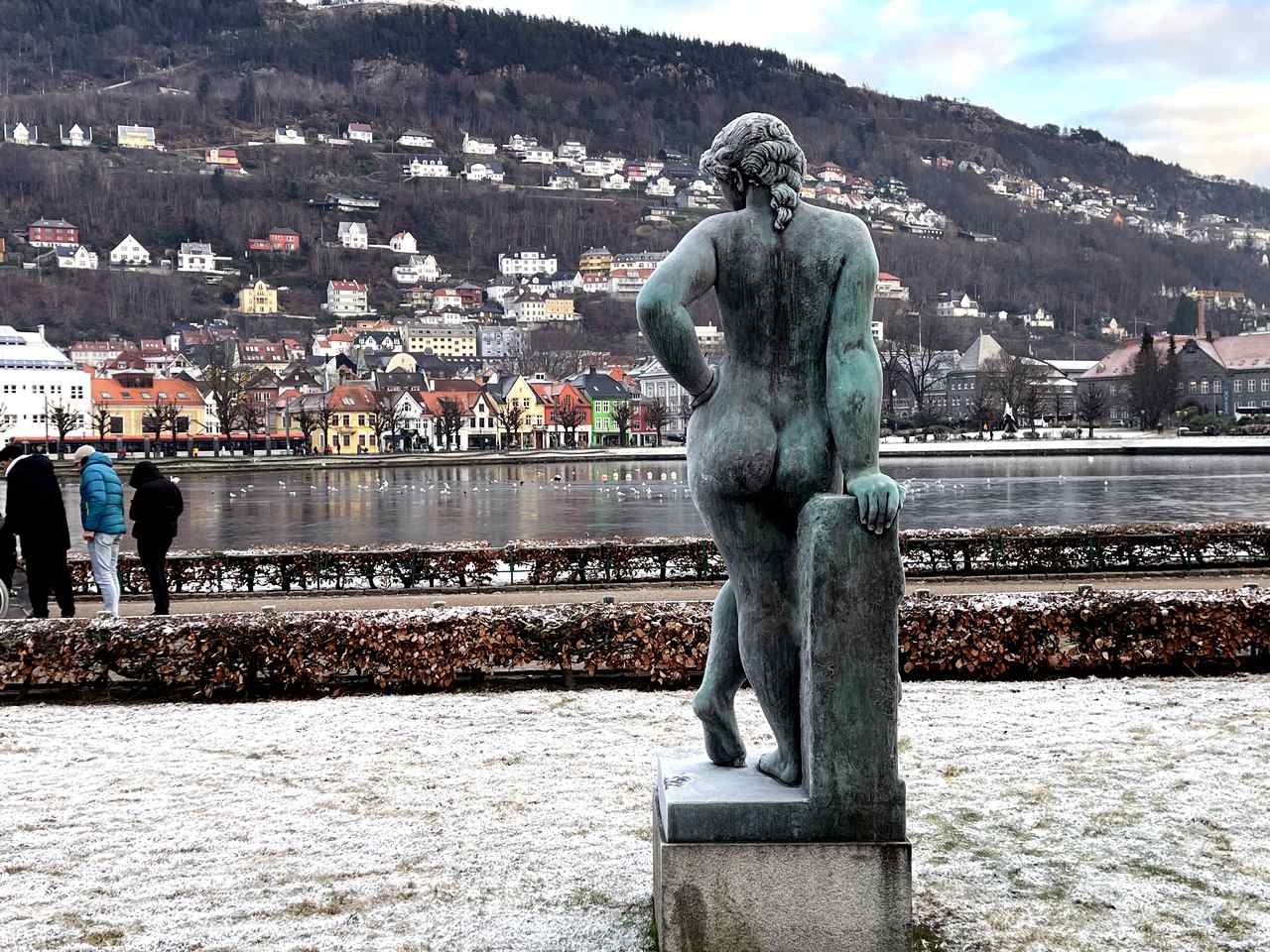 Around 10 minutes walk led me to the lake passing the bronze statue of the Dansk pige opposite the Arts Museum. I was heading to Gingerbread Town which this year is located in the KODE4 art museum. 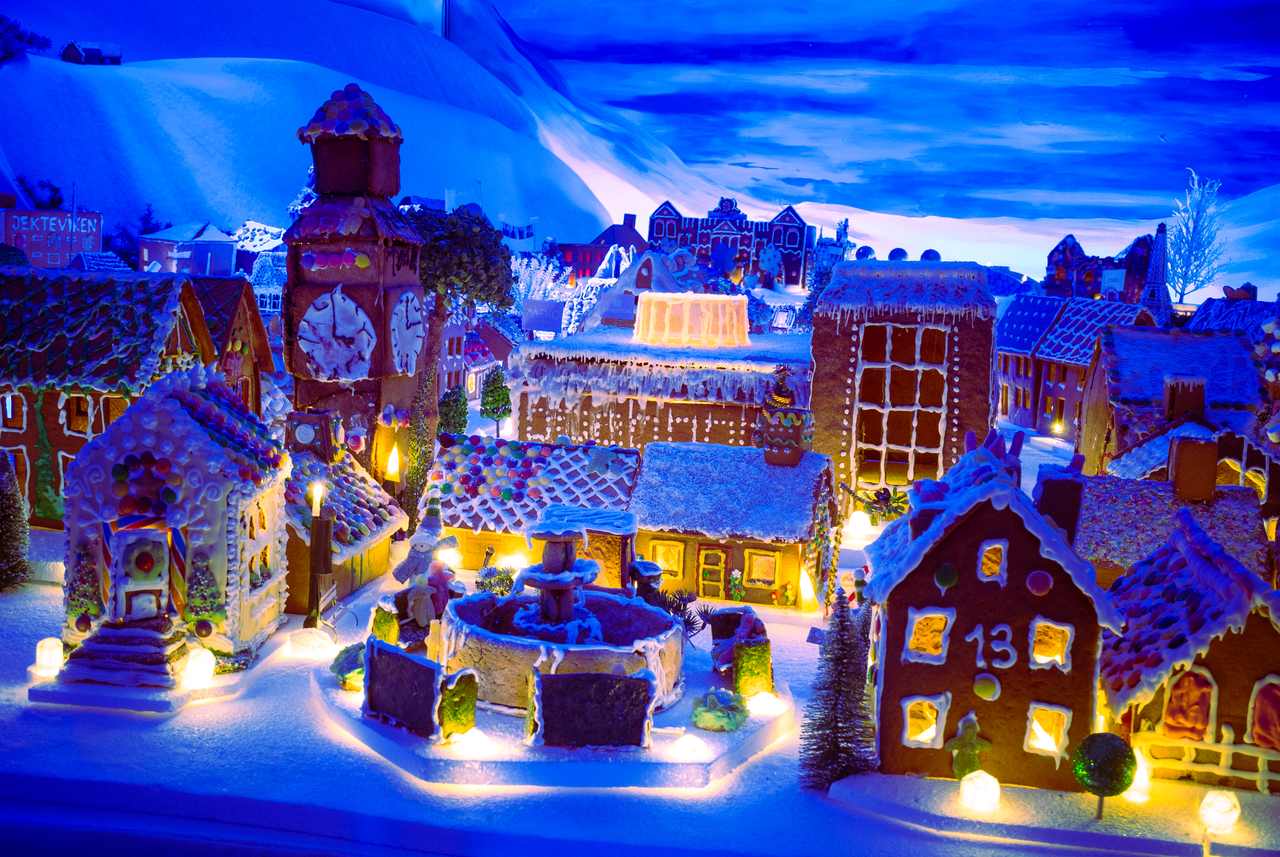 The Gingerbread Town known locally as Pepperkakebyen is a bit of an institution that appears in time for Christmas. It is the world’s largest town made entirely out of gingerbread by volunteers and includes tiny houses to large towns. It would be wrong not to visit.

Gingerbread Town is open from mid-November to 31st December. 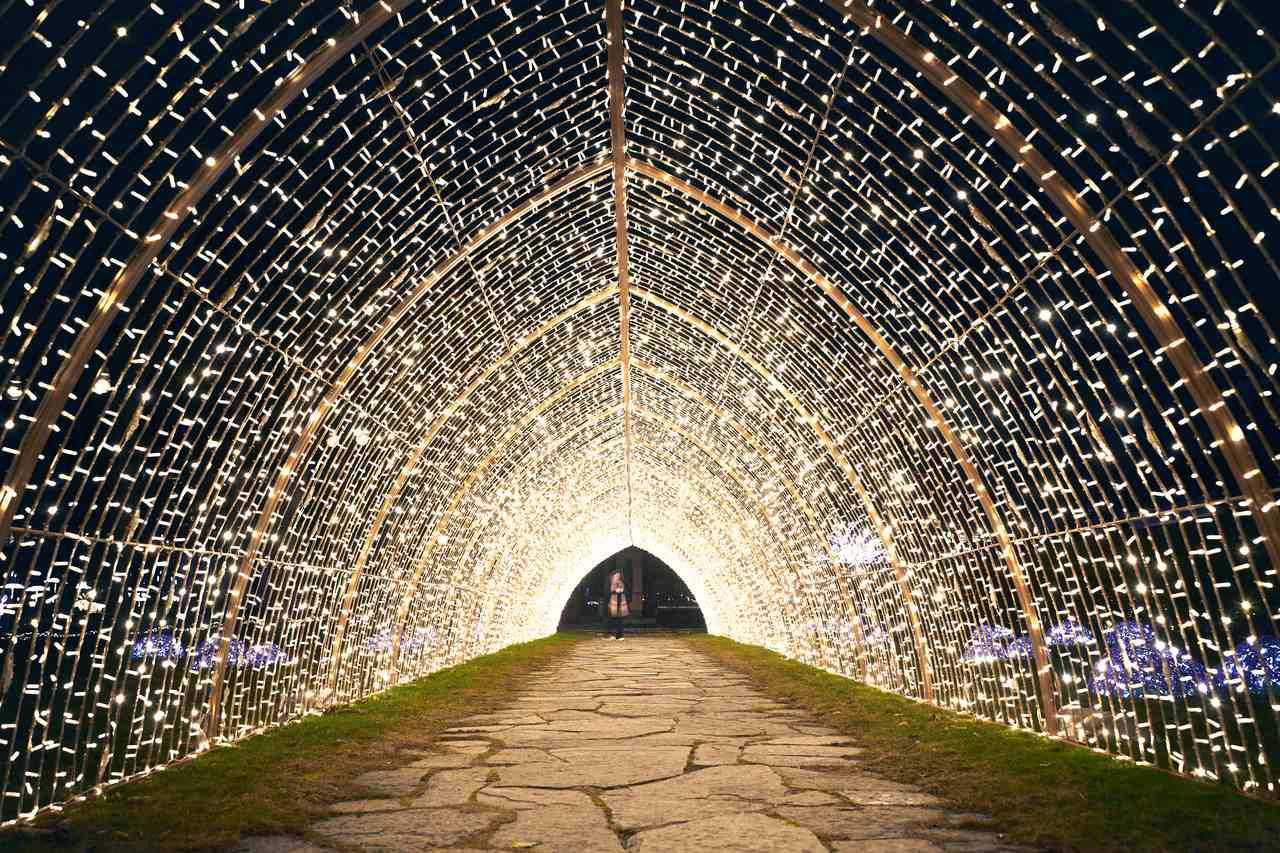 Every year a light show turns up with around 40 artistic light installations and lasts from November to the end of December, and they are indeed magical. It takes place at Bergenhus festning (Bergenhus Fortress) where you follow a path passing the various light artworks, sometimes the lights change to music.

The path ends at a relaxed and cosy tented restaurant. Entry is from 200 Nok or cheaper online.

The Fløibanen funicular to Mount Fløyen

For the views, and also the thrill of travelling through a mountain to reach its top, hitch a ride on the funicular. It’s just a few minutes to the top of Mount Fløyen (320 m above sea level) and the vista is splendid. 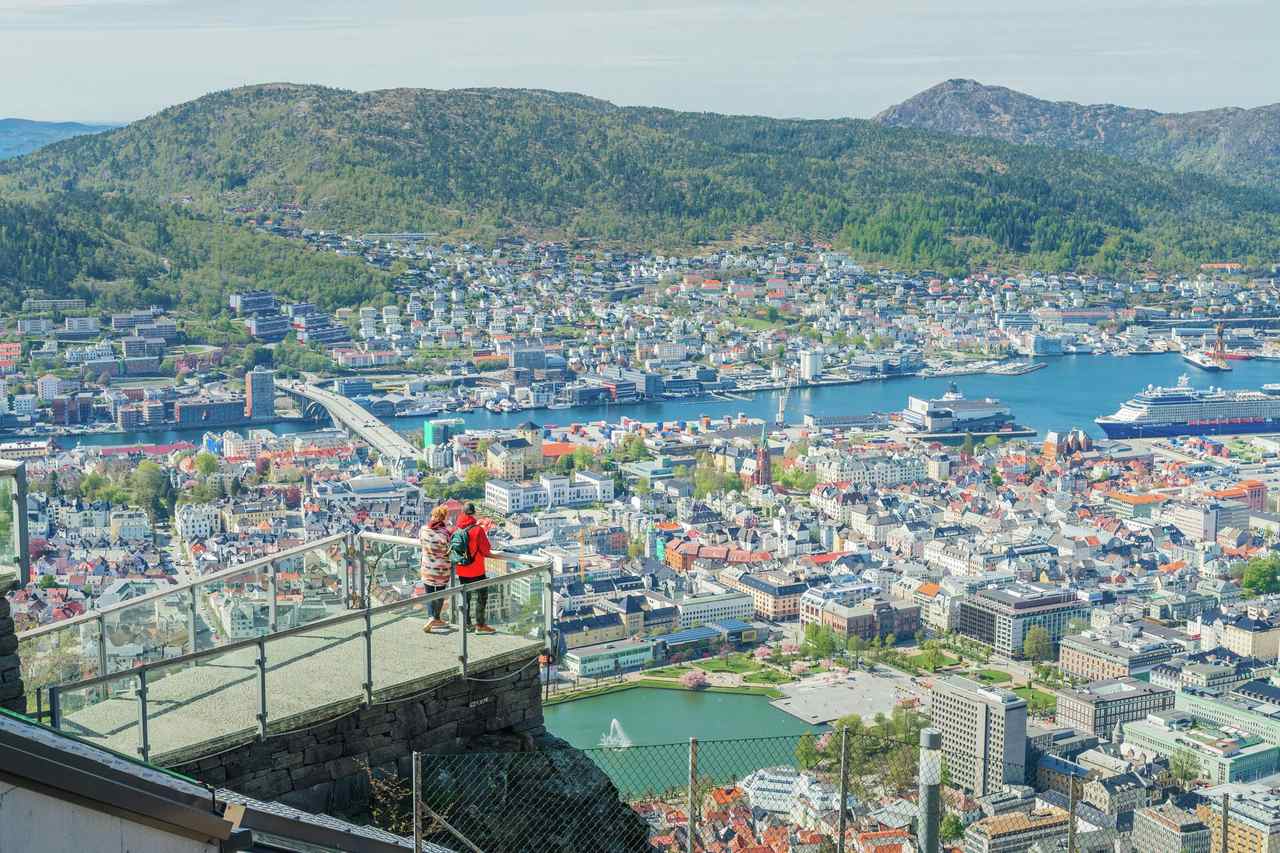 View over Bergen from the funicular c. Casper Steinsland

Alight on the first cabin and grab the first seats as these will give the best views as they unfold.

There’s a restaurant, Fløistuen shop & café, at the top, a restaurant and a shop. Those feeling active can hike, cycle and even go canoeing on lake Skomakerdiket located 10-155 minutes from the top station. You can walk down, it’s just a 40-minute stroll, but I chose to descend on another thrilling trip via the funicular.

Norway in a Nutshell tour

This is a very special tour that takes you on a boat trip through the amazing scenery of the fjords and then onto a train journey dubbed the most beautiful in the world.

The boat, Future of the Fjords, leaves from Gudvanged and is comfy and quiet. Today it was sunny with blue skies yet so cold that the boat was actually breaking the ice as it moved forward on the water at 15mph.

The scenery is beautiful, especially by the Beitelen mountain where the three fjords – Sognefjord, Aurlandsfjord and Nærøfjord – meet, and the colourful village of Undredal where I managed to snap a picture while passing. The boat makes one stop at Aulandsvangen where much more intrepid travellers than I get off to explore Norway’s Grand Canyon. 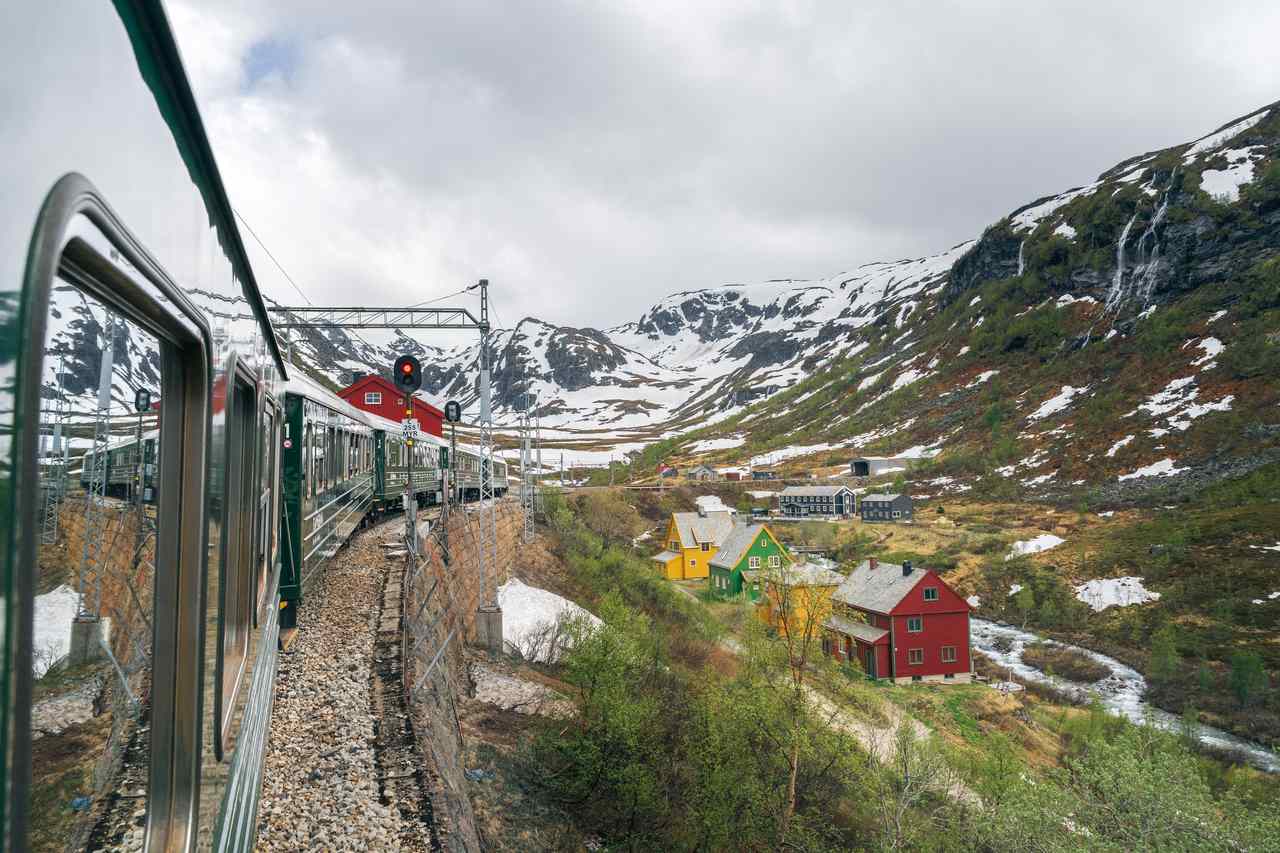 The boat journey ended at Flåm at the end of Aurlandsfjord, a tributary of the Sognefjord, to pick up the Flåm railway for a beautiful 50-minute journey up to the high mountains at Myrdal station.

It’s another 30-minute wait and another hot chocolate but once onboard, we began the 20-kilometre journey rising from an altitude of 2 metres as we headed to our final stop at Myrdel to 867 metres above sea level. As the train wound its way upwards through the mountscape, we passed incredibly picturesque landscapes, dotted with waterfalls including the most spectacular, the Rjoandefossen waterfall, whose water is literally stopped in its flow by the cold.

A short trip to Bergen any time of year is joyful, if you make it in time for Christmas, you will get that extra bit of festive joy thrown in.

FLY: Norwegian airline Widerøe Airlines fly direct from the UK. Widerøe flies daily from London Heathrow to its hub at Bergen. From Bergen there are frequent onward connections to a number of other destinations in Norway, making it possible to enjoy a two-centre holiday in both Bergen and, for example, Tromsø.

STAY: Thon Hotel Rosenkantz is a modern, well-designed hotel in the heart of Bergen. Don’t miss breakfast. It is a highlight.

Fish Me, is a fine dining restaurant by the fish market and so the fish is the freshest it can be.  The starters included ceviche halibut was super fresh and tangy, and the smoked fish selection included, mackerel, salmon and whale, and crab balls served with wasabi sauce. The mains were baked salmon and some reindeer dishes.

Frescohallen is the trendiest place to be seen. This former stock exchange building overlooking the beau monde, opened in May 2022, is almost as spectacular as the frescos by Axel Revold that decorate the high-domed ceilings.