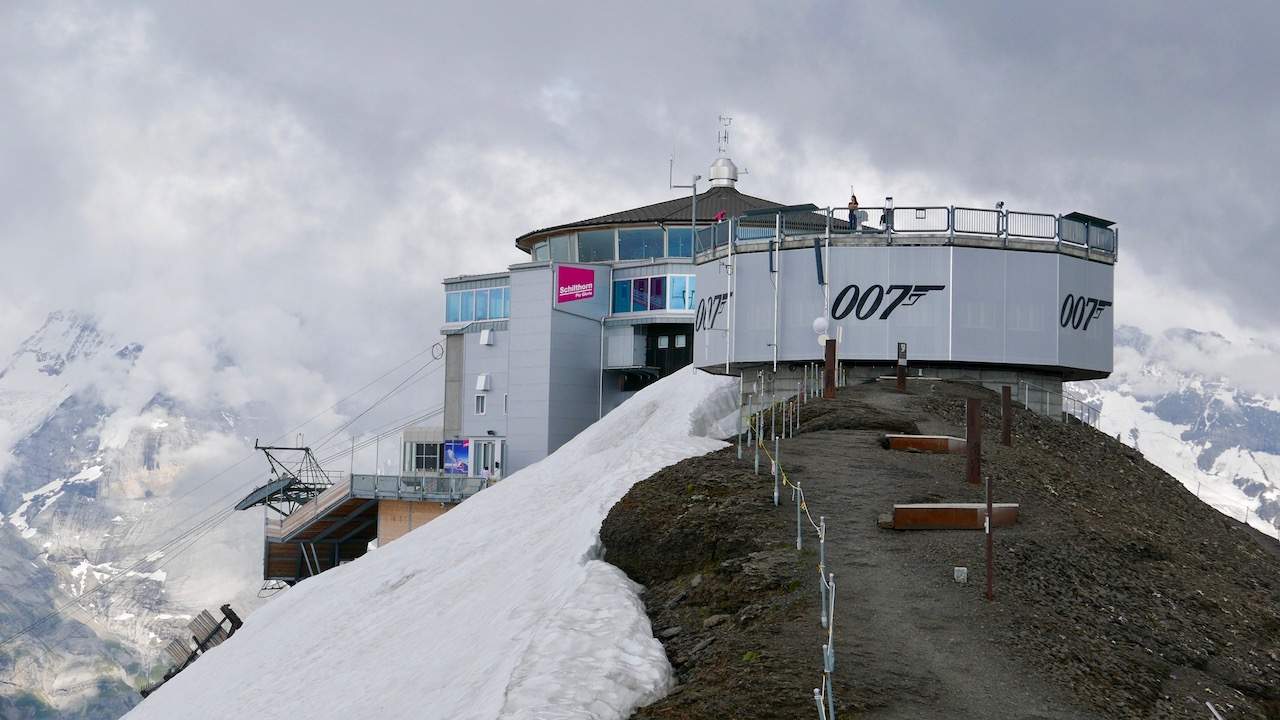 In the wake of the sad passing of the supremely gorgeous late Diana Rigg it brings to mind the Bond film she featured in On Her Majesty’s Service. The legendary actress played the exquisitely seductive Countess Tracy di Vicenzo.

Like every other Bond story, this one features a masterly villain with ambitions of world domination, but few are so iconic as Ernst Stavro Blofeld. Most recently portrayed by Christoph Waltz in Spectre, Blofeld has appeared in seven other Bond films and is often seen stroking his white Persian cat in evil contemplation.

One such appearance is in “On Her Majesty’s Secret Service”, one of the more divisive Bond films thanks to its leading man, George Lazenby, who played the role of 007 just the once. Although the 1969 film received a lukewarm reception from critics, many consider it to be one of the best in the series, in part because of its spectacular scenery.

The site of Blofeld’s secret lair, Piz Gloria, is atop the 2,970m summit of the Schilthorn in Switzerland’s Bernese Alps. This is one of the only places in the world where the public can experience a Bond film set up close and personal.

Covid-19 update: Piz Gloria is currently open to visitors (as of 21 September 2020) but with restrictions. Visitors must wear a mask in the cable car on route to Piz Gloria.

The story of Piz Gloria

While searching for the ideal film location for Blofeld’s lair, the production team came across a partly constructed sports bar with a revolving floor on the Schilthorn summit. Set against a backdrop of dramatic, snow-topped mountains, which includes the indomitable Eiger, it seemed the perfect setting for a villainous plot. The film’s producer agreed to finance its completion in exchange for exclusive filming rights. 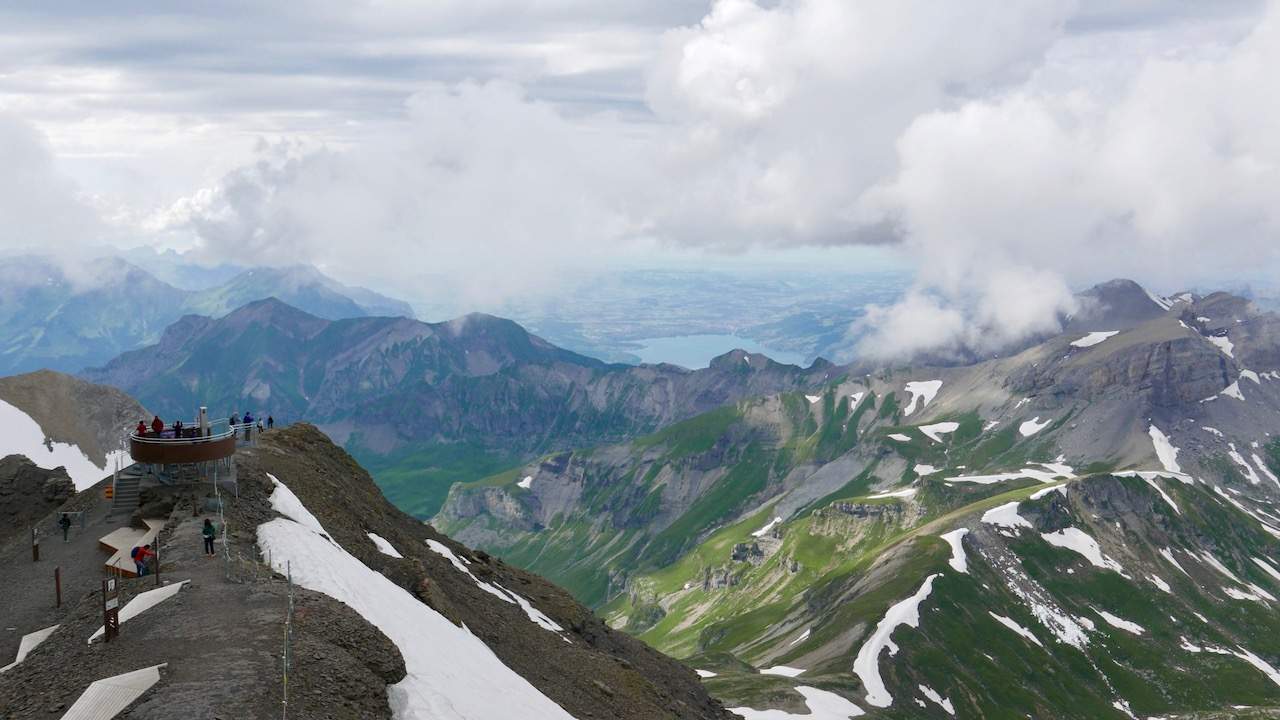 Wonderful views from the top of the Schilthorn, including the “007 Walk of Fame” (c) Lucy Woods

Since filming ended, the building has retained its Piz Gloria moniker, taking full advantage of the Bond connection. The restaurant has floor-to-ceiling windows and revolves a full 360 degrees in 55 minutes. The family-friendly menu includes the fan favourite “007 burger” complete with a 007 stamped logo on the bun.

As well as a restaurant, there is also a permanent exhibition containing Bond memorabilia and film clips on the lower floor. While this could seem a little corny, the “Bond World” exhibition is actually very well presented, with a great selection of iconic Bond posters, part of the helicopter used in the film and various interactive games and entertainment.

As you exit the cable car at the top of the Schilthorn, you are immediately presented with some rather spectacular views of the mountains surrounding the region. This includes the Jungfrau, Eiger and Jura Mountains. On a clear day, you can also see Mont Blanc, the highest mountain in the Alps. There is a large, open area covered with tables and chairs, where you can relax with a cocktail and enjoy the views. 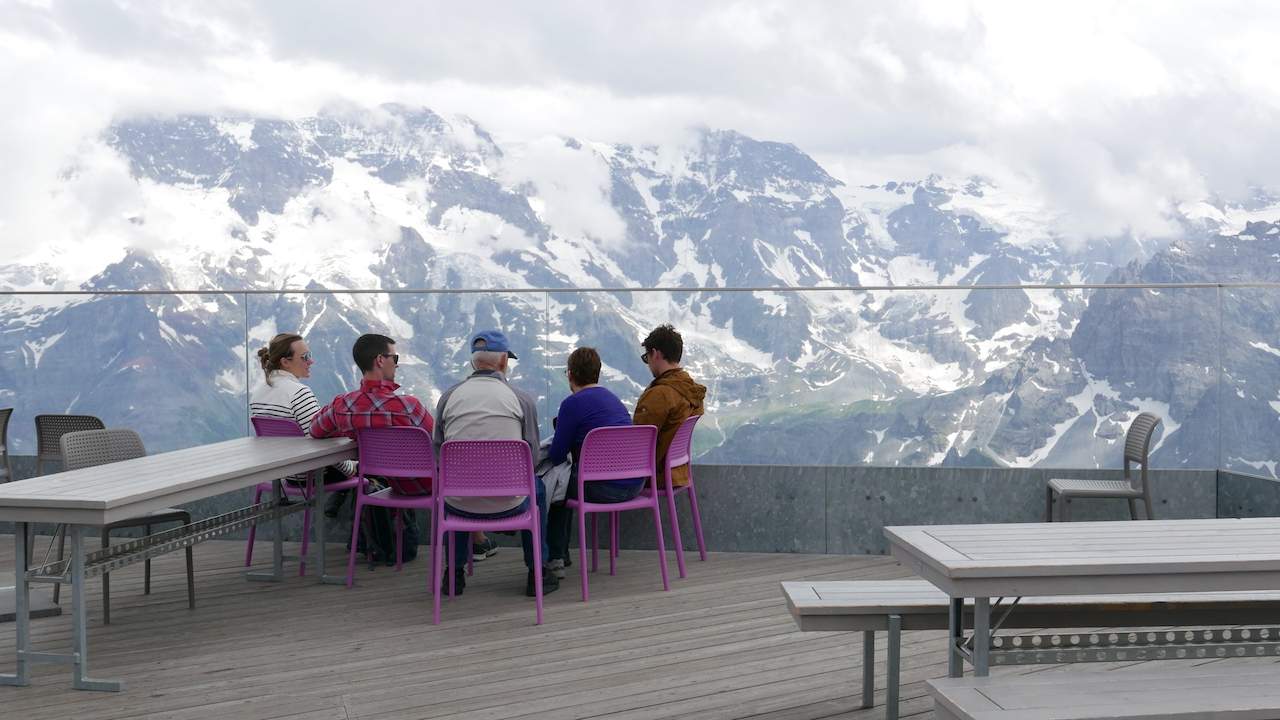 A table with a view (c) Lucy Woods

If you’re feeling more adventurous, you can take part in the “thrill walk”, a 200m long steel and glass walkway that hugs the rock and leads to the cable car station. Not one for vertigo sufferers, the walkway is both narrow and high, but you are rewarded with uninterrupted views of the valley of Lauterbrunnen. You can also channel your inner Bond and attempt to crawl though an (optional) eight-metre tunnel with clear views of the 250m drop below. 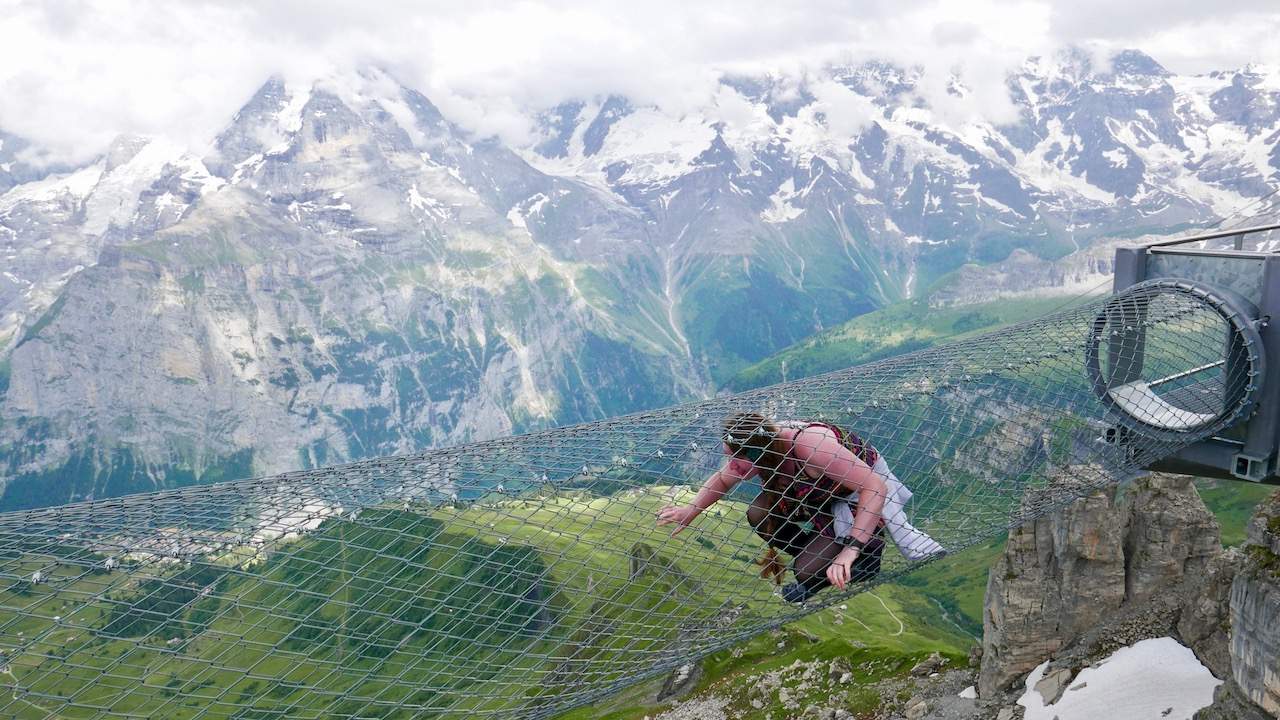 If you haven’t had enough of 007 by now, there is a new exhibition outside called the “007 Walk of Fame”: a series of statues featuring handprints of the film’s cast and crew and information about their time on set. The opening event in 2015 was attended by George Lazenby himself.

The Schilthorn lies above the picturesque village of Mürren, and from here you take the cable car to the top of the Schilthorn – a full price return adult ticket (including entrance to the indoor Bond exhibition and the “thrill walk”) costs 82.60 CHF/£63. If you purchase a Swiss Travel Pass in advance, the return ticket is free.

If you are travelling from further afield, you will need to take the Lauterbrunnen-Mürren mountain railway, before taking the cable car to the summit. 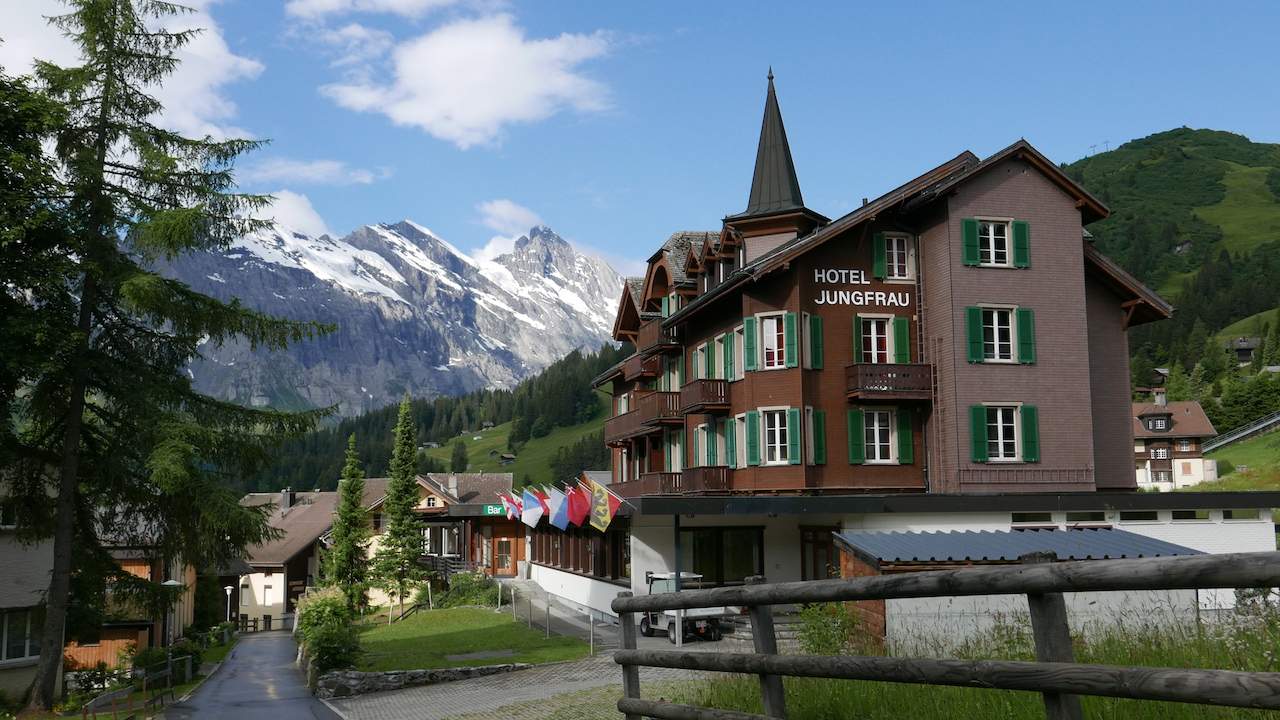 If you decide to stay in Mürren overnight, the 3* Hotel Jungfrau has comfortable rooms, friendly service and a decent buffet breakfast.