Over the years, whilst living in Syros (the administrative capital of the Cycladic group of Islands – Kyklades in Greek), I had heard what an attractive and unique island Sifnos was.

Not so far away, Sifnos is in the chain forming the Cyclades’ western arc and can be seen from the southern end of Syros some 24 nautical miles away. It was said to have an exquisite dreamlike quality.

So I boarded the charming “Artemis” ferry, one of the smaller boats in the Hellenic Seaways fleet, for the four-hour trek to Sifnos.

The delightful port of Kamares on the island’s west coast doesn’t disappoint.  As you enter the deep bay, one is taken back by the height of the rocky hills that form a grand amphitheatre effect. On the hilltops are several tiny isolated white dots that are Greek Orthodox Monasteries. Typical of the Cyclades, it has a dry rocky terrain that meets a stunning white sandy beach and the royal blue Aegean Sea.

It’s a favourite with tourists, but I headed for Apollonia, the capital and the nucleus of a collection of villages all within a two-kilometre radius (Artemonas, Kato Petali, Katavati,  Exampelas, Ano Petali). The 20-minute bus ride up a steep and winding road to Apollonia was an insight into what the island’s topography would offer.

Up into the centre, the rugged rocky landscape is interspersed with green outcrops of the low height ubiquitous Skinos plant with the ever-present white with blue Cycladic cubic houses scattered about.

The following day I set off on the three-kilometre one-hour walk to the island’s biggest tourist attraction, the Kastro (Castle) on the island’s east side. It offers magnificent panoramic views of the Aegean with Paros and Ante Paros a faint outline in the hazy distance.

Kastro is a walled cliff-top medieval village that was once the island’s capital. It is a magical place, a labyrinth of winding alleyways and white-washed houses hanging off the island’s eastern edge. It remains the most important medieval settlement in the Cyclades and all of Greece.

It is best to enter the village by using the peripheral path around the seaside to enjoy the stunning views of the majestic royal blue Aegean before sighting the church below.

The iconic Church of the Seven Martyrs is located below Kastro on a neck of land jutting about 50 metres out to sea. Whilst only small, it is the most symbolic church on the island and one of the most photographed spots in the Cyclades.

In Kastro, a coffee or something a little stronger can be enjoyed in the upmarket Dolci Cafe Restaurant perched on the western side of the village, offering panoramic views of the hinterland valleys; I suggest a full day should be devoted to exploring this amazing settlement, with a lunch at one of the few delightful tavernas.

Taking the bus from Apollonia (regular summertime hourly service) down to the attractive beach settlement of Faros approx six kilometres away on the island’s southeast corner, is worthwhile.

A small yachting marina jetty brings life to the village, and there are two very pleasant beaches (with several tavernas and cafes) connected by a path through a small headland with houses.  Both have tamarisk trees offering shade for the beachgoers within the horseshoe-shaped bay. 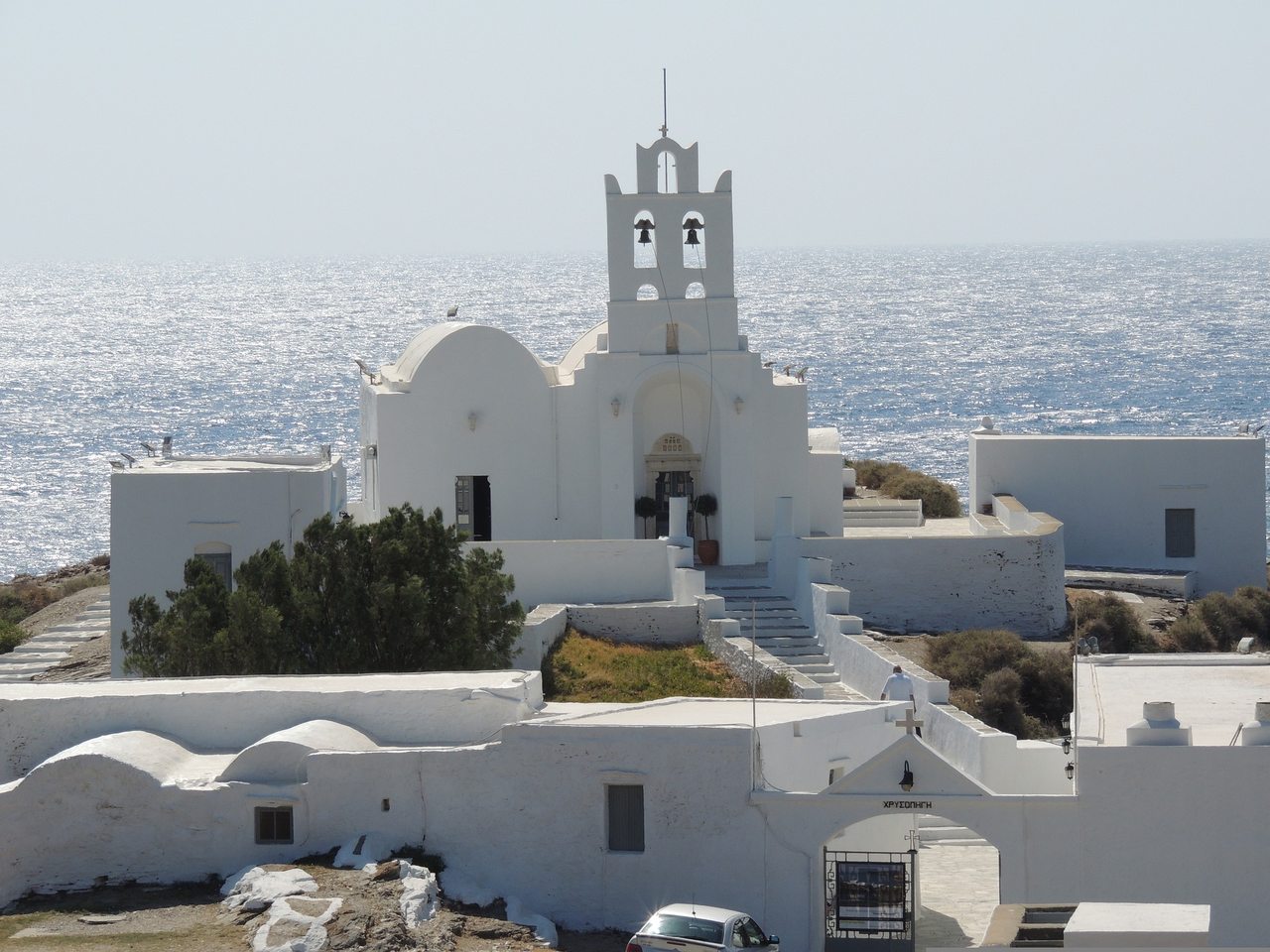 A sign showed the Path to Chrisopigi, another famous church on a slither of land, protruding 100 metres into the sea. The one-hour walk along the man-made path, which meanders approx two kilometres around the edge of the sea to Chrisopigi,  is one of the most picturesque you could expect in these sublime islands. At around 8pm with the setting sun in the west, this was a surreal experience.

The  Monastery of Panagia Chrisopigi – Protector Saint Chrisopgi of the island, is another famous landmark on Sifnos. The monastery was built on top of an older church and is located on top of a rock, literally upon the sea. It is well worth visiting.

Sifnos has developed into a hiker’s paradise with19 designated trails crisscrossing the island. Free detailed maps are available from the Information Offices, and they advertise 100 km of trails ranging from one kilometre (20-minute walk) to 15 kilometres (seven hours) that are very well signposted.

I chose Trial Five, which starts in the neighbouring village of Katavati. It heads in a south-westerly direction ending on the other side of the island in the bay of Vathi, some nine kilometres away.

Setting off at 11am on a date forecast to hot, I was unprepared for the magnitude of the trek, especially during the day’s heat.

A friendly young Belgium couple coming down from the mountain guided me to the correct starting point. Incredulous that I was attempting the trek on my own, they warned me of the need for both water and hat, both of which I had. They had been on a separate trail to the mountain top Monastery of Profit Ilias, which seemed to hang like a cloud in the sky on a distant mountain top. “Good luck” they proffered.

The terrain becomes rugged away from the town, with the track following along the side of a long valley. Whilst the trails are intermittently dotted with the welcome red and white signposts, it’s easy to get distracted by the scenery and veer off onto the wrong path.

An hour into the walk, I managed to get lost and stumbled across an immaculately kept chapel known as Agios Efstathios (Agios means Saint), in such a remote location that I could not understand who would use its divine facilities, let alone maintain its immaculate condition, I would see many more. It seems the Greeks are very religious folk.

Further up the valley along the path came the authentic mountain man on his donkey, with another in toe. This was the only available transport on such a rocky path. The steep track was starting to take its toll, and my water supply was waning as quickly as I. I found myself constantly looking for the reassuring signs, as there was now little margin for error in getting lost again.

These middle two hours of the six-hour trek were the most difficult, up up up on a very rough and rocky path. Eventually, I reached the top of the mountain and caught my first glimpse of the sea out to the west.

Even more of a relief was the cool breeze. Whilst I was only halfway there, psychologically, I was restored knowing that the rest of the hike would be downhill to the sea. In the far distance, I could see the faint outline of Kimolos and Milos islands to the southwest.

I lost sight of the sea as the track diverted back inland along another valley. Along this section, I came across an amazing man-made olive grove of approx 20 trees. Such an unusual place was totally isolated: the small, well-kept white house with no one home.

Perhaps this was where the mountain man lived with his two donkeys. It was such a peaceful setting that I had a 15-minute rest and savoured the serenity of the landscape and my last remaining water.

An hour later, I caught the first glimpse of Vathi Bay approximately two kilometres below in the distance, a welcoming and beautiful sight.

So it was around 5 pm when I staggered off the track and onto the lovely beach at the bay’s northern end (a superb, almost land-locked bay with a narrow entry passage). There were many yachts moored and people enjoying the beach. A nicer swim I doubt I have ever had, and the icy cold Alpha beer at a seaside taverna has never tasted better.

I eventually left the tranquillity of Vathi on 6 pm bus back to Apollonia.

Sifnos is medium in size by Greek standards, just 15 kilometres in length and eight kilometres in width, with the highest point being 680 metres (location of the Monastery of Profit Ilias) and a permanent population of approx 2,650 people.

It is known for its traditional pottery, many small workshops in the villages, and its hiking trails. It has become the most popular destination in the Western Cyclades. Visitors flock to the island in summer lured by its charming villages, terraced countryside dotted with ancient towers, Venetian dovecotes and long sandy beaches.