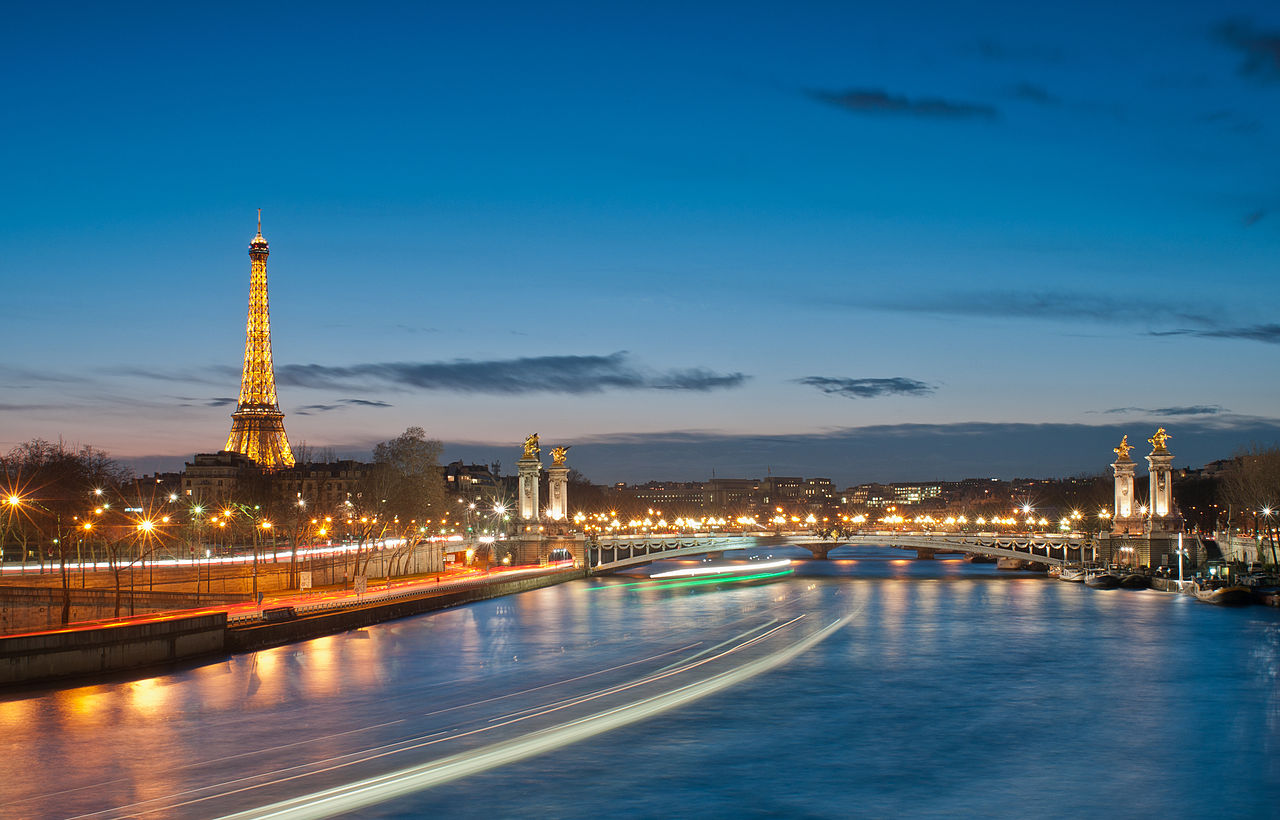 The difficulty is often in knowing what to restrict yourself to seeing. 48-hours lets you take a bite-sized chunk out of this delectable destination. Just remember, if you find yourself overwhelmed, plop down at a café, order a tipple and watch the world go by for a bit before diving into whatever else the city has in store for you.

The omnipresent joie de vie thanks to elegant architecture, classic food and, an effortlessly sophisticated population provide a relaxing getaway.

Our two Paris experts, Ryan Levitt from HouseTrip and Pascale Barget from Twenty Something London suggest their favourite things to do in Paris. 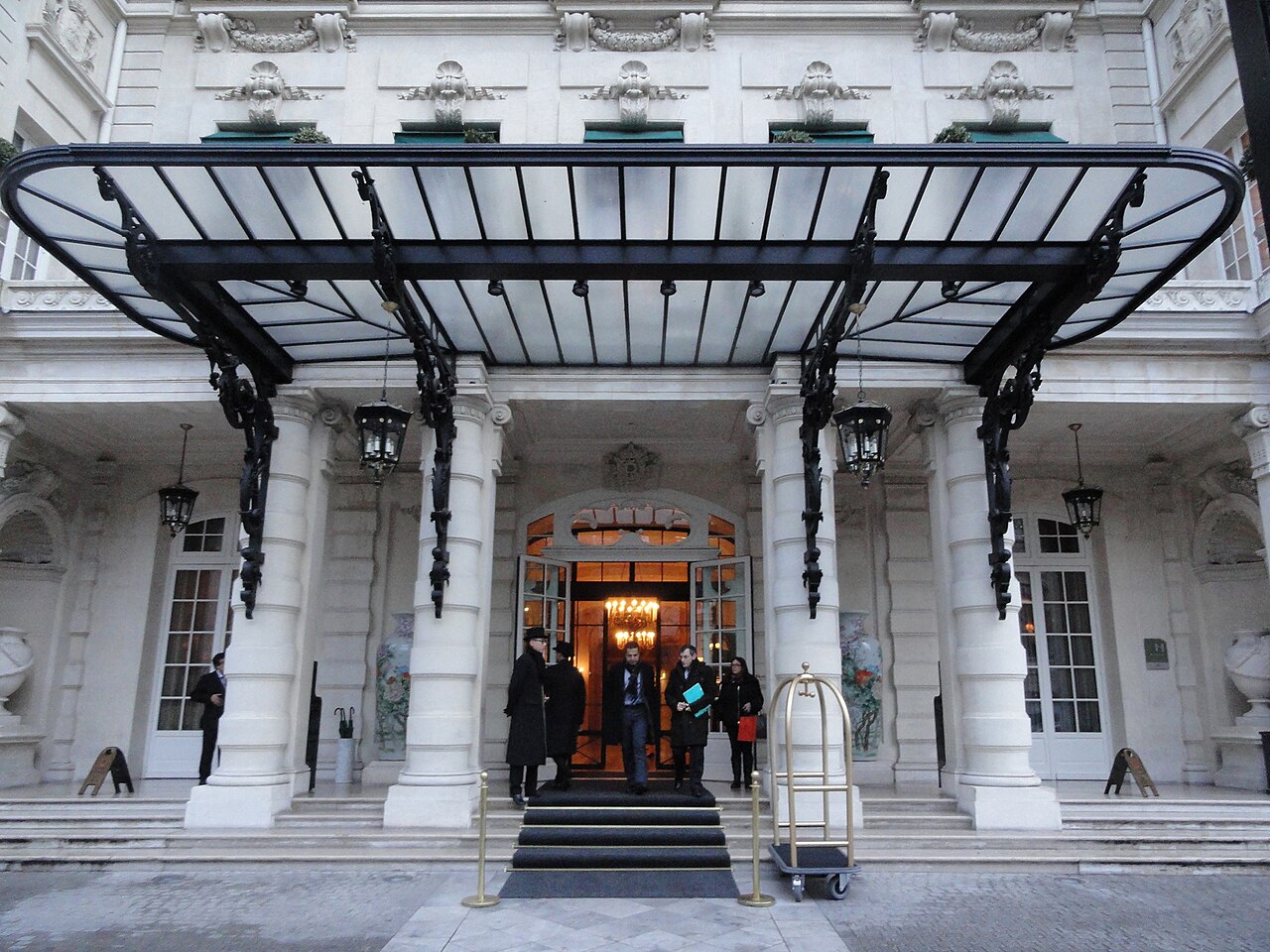 Pascale: If money is no object the grandeur and romance of one of the city’s stately hotels such as the Four Seasons George V or the Park Hyatt in Place Vendôme (rooms from €925 and €660) will provide the movie-esq sought after experience.

For a more sleek option consider Hotel Costes (rooms from €400). The latter also becomes a hub of activity during the evenings thanks to the myriad of themed seating area near the bar.

For a quintessentially authentic and charming experience take a look at the Hotel Saint-Paul Rive Gauche in Odeon, offers rooms from €150 per night. The building dates back to 17th century and was opened by the great grandfather of its current owners, Mr. and Mrs. Hawkins. It has stone walls and rustic wood beams are draped in rich colours and fabrics. They even have quadruple rooms for families.

Ryan: Paris offers plenty of places to rest your head, but quality can vary wildly. For every former palace there is a hovel and everything else in between. The most glittering new arrival to the hotel scene was the Shangri-La Paris which was opened in 2010. Once owned by a member of the Bonaparte family, the hotel particulier is situated in a very chic part of the 16th Arrondissement just across the river from the Tour Eiffel.

For something more affordable consider renting a private residence. HouseTrip offers over 3,000 private residences for rent from studios from €19 per night to six-bedroom homes. Some have private swimming pools and jacuzzis.

Pascale: Most of Paris’ 20 arrondissments have markets but a particular favourite is Le Marché des Enfants Rouges. Situated in the Marais, the place houses lots of outside eateries and very few tourists know about. Tip: Go for either the Moroccan or the Japanese and head there early, around midday, to avoid queuing for ages.

Many tourists think dining in Paris is expensive. Yes it can be but it doesn’t have to. Paris Hanoi has two places in the 10th and 11th arrondissments that serve unbelievable Vietnamese food at around €10 a main. Reservation is essential.

Bouillon Chartier, an infamous restaurant over 100 years old situated in an ex-railway station serves traditional and very basic French dishes diners come here for the atmosphere. To avoid long queues in the evenings arriving early is a good tip. Chez Janou, a charming and bustling French bistro, is well-known for its delicious chocolate moose.

Ryan: Paris is synonymous with the Michelin star, and there is no better place to enjoy haute cuisine than in the French capital. But you will have to pay for the privilege. In the 2012 guide, there were 10 restaurants in Paris offering three-star cuisine, including Pierre Gagnaire, one of the leaders of the fusion cuisine movement.

For something a little more affordable, go where the hipsters go and head over to Paris’ answer to Shoreditch; the Canal St. Martin. Chez Prune is the place to see and be seen. Bistro fare including tasty quiches and salads is standard. It won’t win any awards for quality but it is definitely the place to go if you want to live like a bright young thing. 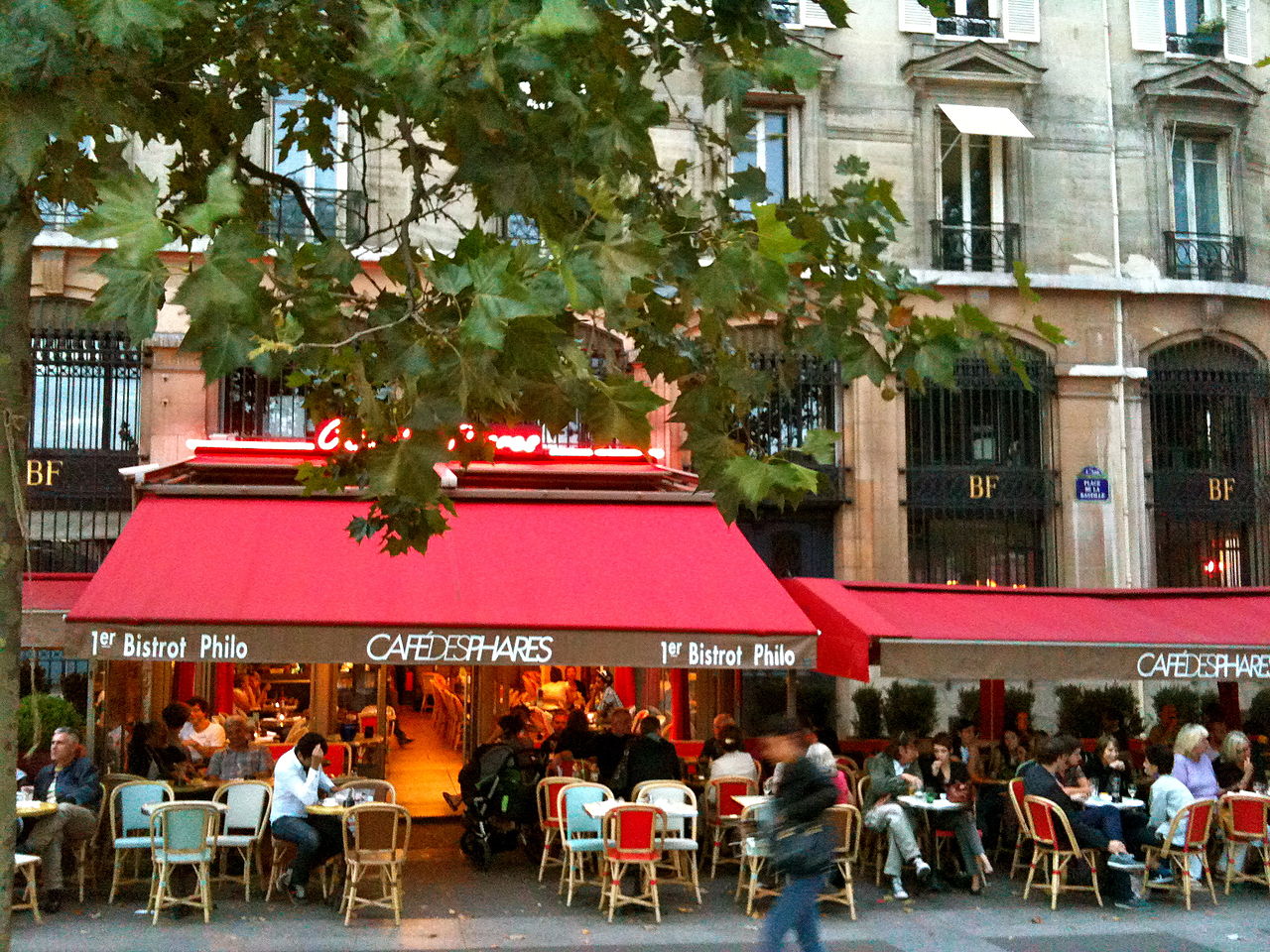 Pascale: The café culture in Paris is how it should be, with cosy and independent cafés lining the streets. Our favourites are La Caféothéque which sits facing La Seine and roasts it’s own coffee each day, Le Pic Clops in the Marais for its fun happy-go-lucky colours and reasonable prices, as well as La Palette in St Germain for its constantly buzzing atmosphere. Mamie Gateaux on Rue du Cherche-Midi is fantastic for their freshly made quiches, cakes each day.

Ryan: Wherever you go, a glass of French wine always adds to the experience, so be sure to take a bottle whenever you decide to go for a stroll. Many cafes allow you to bring your own tipple and will simply charge an uncorking fee, so if there is a particular vintage you would like to try, see if you can bring it along to your meal. There’s nothing quite like sitting by the banks of the Seine or relaxing in the Tulieries gardens while sipping a Bordeaux to make the day seem spectacular.

Read also: 10 Paris bars and cafés only locals know about

10 Paris bars and cafés only locals know about 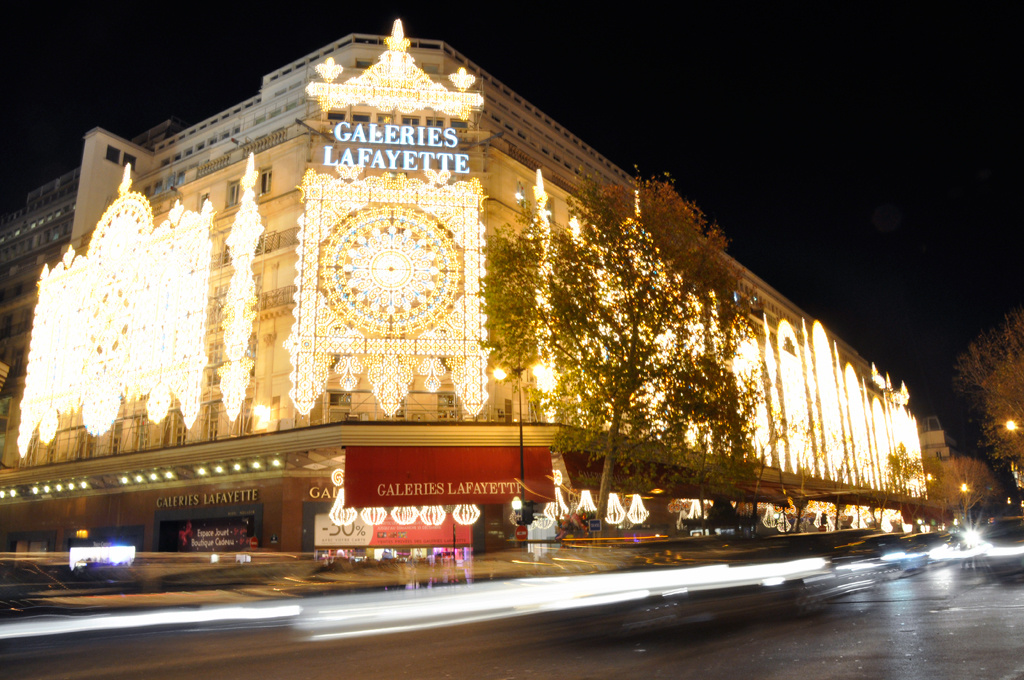 Pascale: le Marché aux Puces is a great flea market in the north of Paris, fantastic for picking up something unique. There are also the city’s vintage shops in the Marais, with Omaya Vintage albeit slightly off the beaten track, a very good find. For more savvy and sophisticated spending, walking around the Marais on a Sunday (when the rest of the city shuts up shop) or around St Germain are a good bet.

Ryan: If you only have time for one place, head to either Les Galeries Lafayette or Printemps, the famous French department stores. While they lack the charm of smaller family-owned purveyors and the sophistication of the famous haute couture ateliers such as Chanel and Dior, they do provide a convenient ‘one-stop shop’ opportunity for the best that France has to offer. Not only that but Printemps boasts one of the largest selections of perfume in the world. Both shops are located next-door to each other on the Boulevard Haussmann.

Ryan: Forget the ubiquitous cupcake. Macaroons are now the ‘it’ sweet delicacy of choice and there is no better place to buy them then from Pierre Hermé. Choose from unique flavours such as Violet & Aniseed, Salted Caramel and Milk Chocolate with Passion Fruit. Be prepared to elbow your way past the constant stream of Japanese tourists who seem to devour these treats by the boxload. Shops are located throughout the city. If you are visiting the Louvre, the shop at 4 rue Cambon is convenient.

Pascale: Going out in Paris mainly consists of bars that get super busy at nights rather than the outright club. The good news is that you don’t usually pay for entry. The Café Cherie in the 20th arrondissment is a good, cheap and fun night out. Candelaria in the Marais is intriguing. One shouldn’t say too much as the surprise would be given away but your first time here will make you think you’ve ended up in the wrong place (in a good way).

Café A and Le Comptoir Général are nearby one another in the 10th arrondissment and are another good place for sociable drinking. Beware, queuing gets underway if you don’t arrive early but at least it’s free.

Ryan: Paris may be the city of lights, but when it comes to great places to explore it is the darkest locations that offer unique finds. Paris Catacombs are a series of underground tunnels built to house the remains of over six million people. Originally old stone quarries, the catacombs were created due to unsanitary conditions at the cemetery of Innocent at the end of the 18th-Century. Today, visitors can explore the fascinating and spooky underground caverns lined with bones and skulls positioned in surprisingly artistic and ordered ways. Entry to the catacombs is near Denfert-Rochereau at 1, Avenue de Colonel Henri Rol-Tanguy.

Ryan: One of the biggest mistakes that first-time visitors make is trying to pack in too much. Try and condense your itinerary to a series of nearby neighbourhoods. By doing this, you can immerse yourself in la vie Parisienne rather than glossing over highlight spots in vague detail. Le Marais is a great neighbourhood to be based in because it offers great shopping and dining, is convenient for the Louvre and other historical landmarks and is also the historically Jewish part of town. Formerly a no-go area, le Marais experienced a massive regeneration throughout the 80s and 90s. Today, it is the address of choice for the chic and sophisticated.

Pascale: Paris is the place for art fanatics. In one trip it’s possible to tour art through the centuries. In chronological order one starts from the Louvre‘s prehistoric era, followed by the impressionists at Musée d’Orsay and more recent work at Centre Pompidou.

Other favourites include Palais de Tokyo and Le Musée d’Art Moderne situated right next to each other and joined by a wonderful terrace with unbelievable views over the city. Another, Jeu de Paume, in Jardin de Tuileries is another good bet for those into modern art.

Read also: Top ten things to see and do in Paris

Top 10 things to see and do in Paris 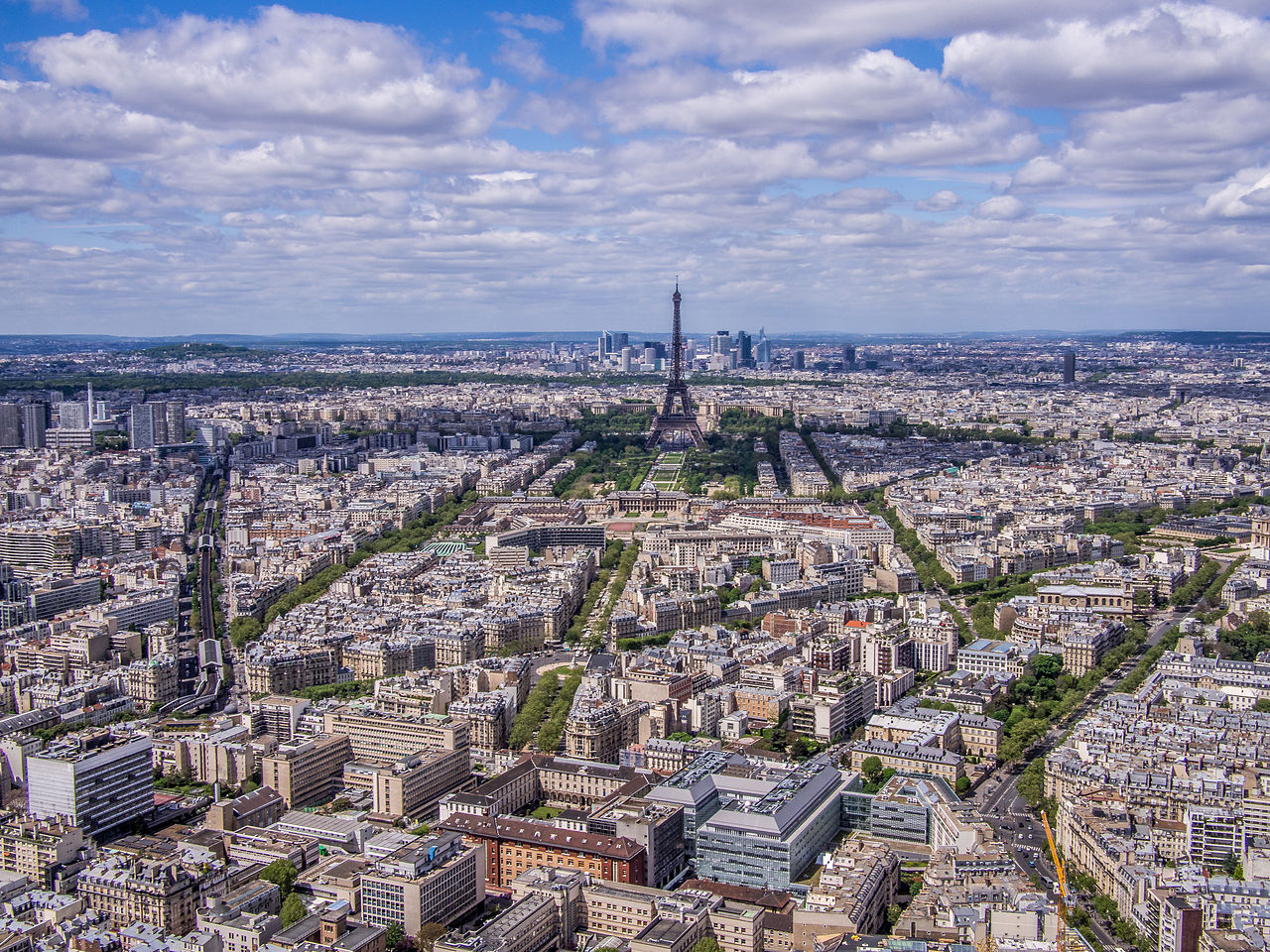 Ryan: Everyone raves about the view from the Eiffel Tower, but there is one thing missing from any photo taken from the top… the Eiffel Tower! If you want to see the city in all its glory, go instead to Tour Montparnasse located in the district of Montparnasse in the south of the city. Tickets cost €15 per person and the queue to go up is always a fraction of what you experience at the more famous Tour Eiffel. 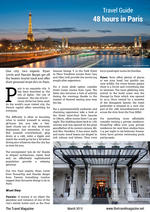 When good travel plans go bad at the airport