Where to swim in the spectacular natural pools of the archipelago of the Canary Islands. 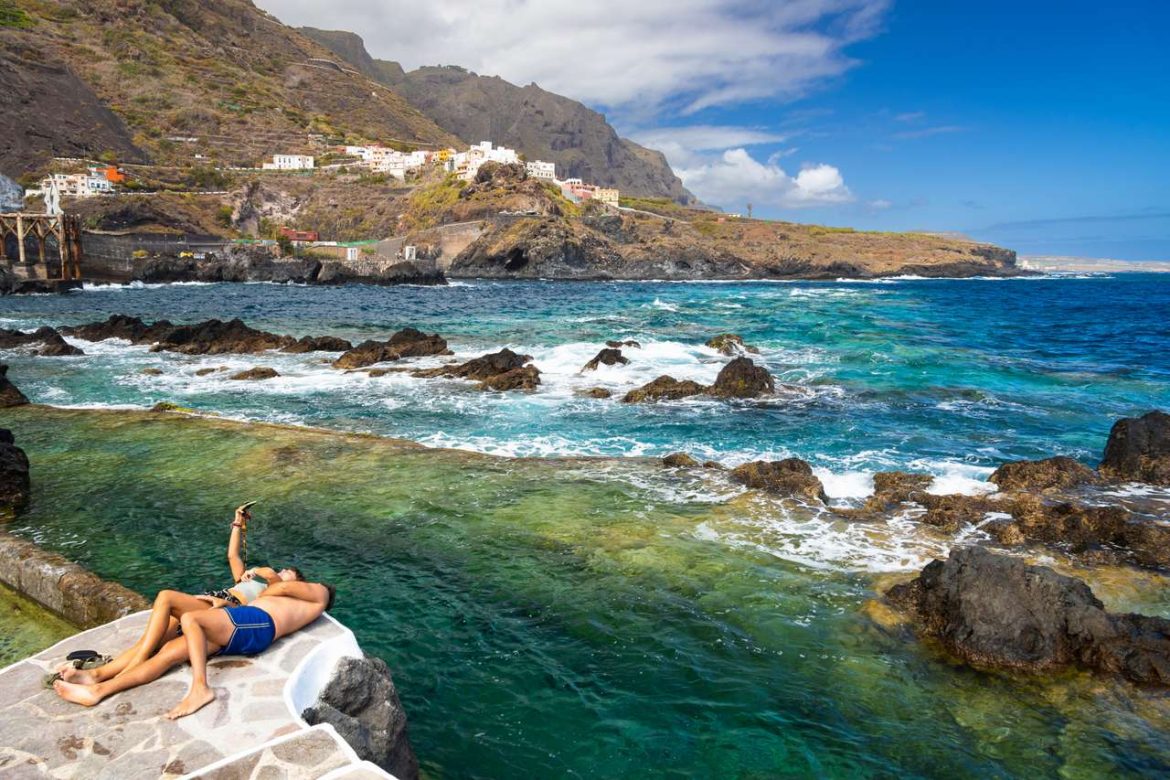 Swimming in the crystal-clear waters of the Atlantic is always a pleasure. But when you swim in one of the strikingly beautiful natural pools of the archipelago, where the Atlantic Ocean relaxes and the sun shines every single day of the year it becomes an unforgettable experience.

These enclosed spaces where water seeps in naturally from the sea are a must for all visitors who are looking for authentic perfection.

We have listed pools in El Hierro, La Palma, Lanzarote, Tenerife and Fuerteventura. 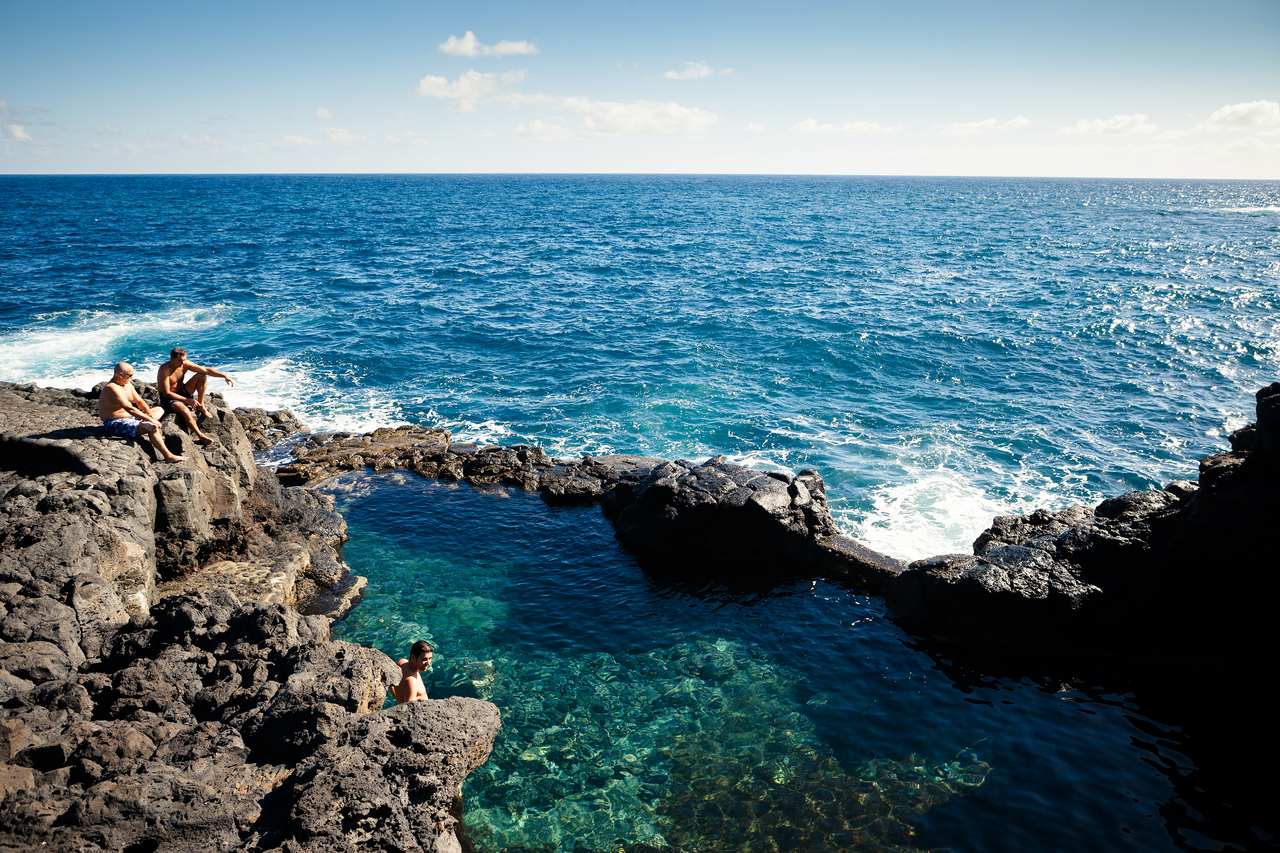 Charco Azul, Santa Cruz de Tenerife, is undoubtedly one of the most spectacular bathing spots on the island of El Hierro, the smallest of the Canary Islands archipelago.

Located in El Golfo, a magnificent valley along the rugged coastline, this pool is one of the finest examples of unique volcanic flows. Created naturally by flowing lava, the water is not too deep and not particularly big but there is an area to sunbathe and a cave you can visit.

Puertito de Lobos – An islet with incredible views of Fuerteventura 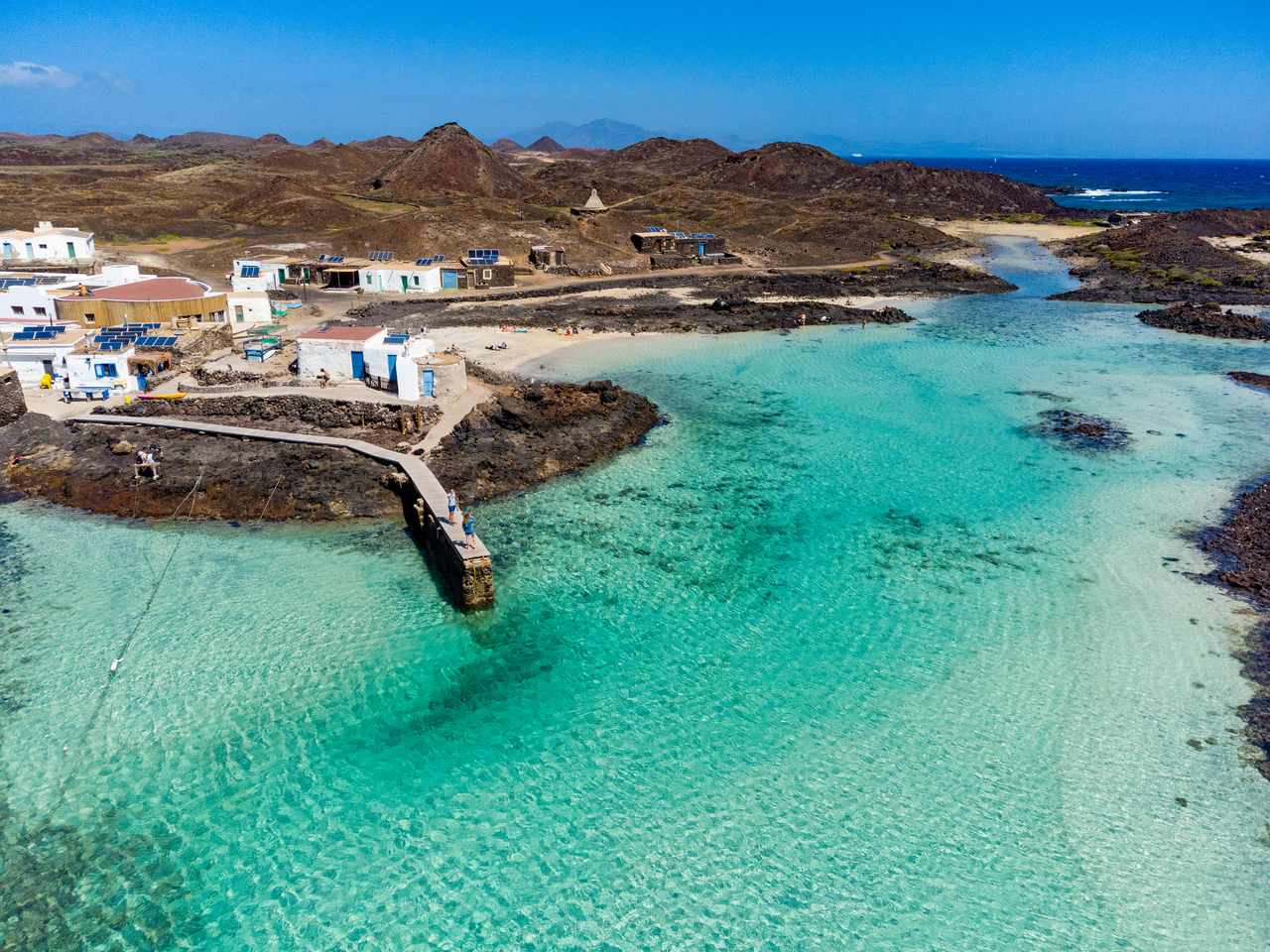 The pools at the virtual uninhabited islet of Lobosareare crystal clear unlike volcanic sea beds elsewhere. And to get here is a fun 20-minute boat ride from Corralejo. The place is considered one of the most popular views of Fuerteventura.

There a fishing boats and a clutch of 10 small houses on the island alongside the vast expanses of water in the area where you can snorkel, swim, dive or just relax. Later enjoy a meal in the only restaurant in the village. 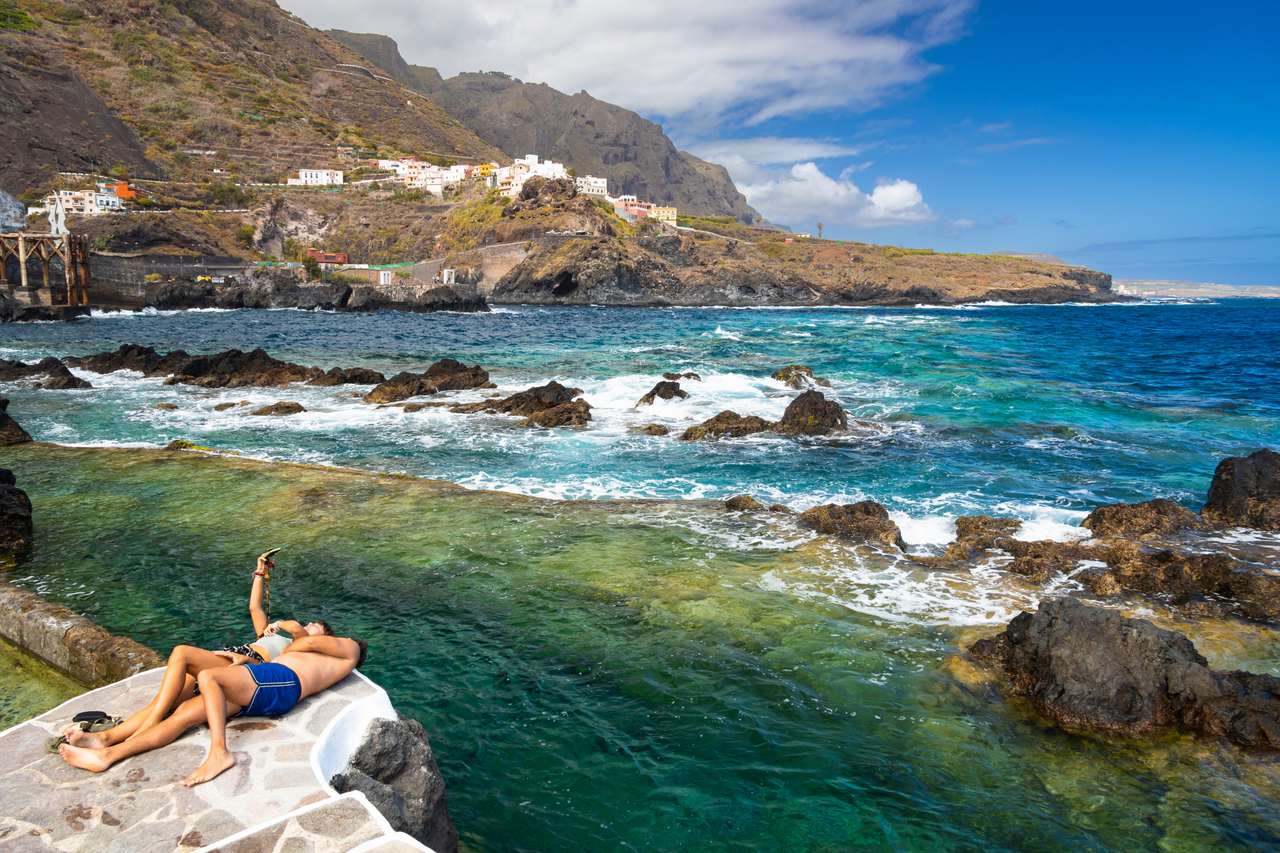 The Atlantic surrounds and soothes the area of El Caletón, in the north of Tenerife. Just beside the San Miguel Castle and with the imposing presence of the famous rock, a symbol of the Garachico eruption in 1706, this area of pure lava offers the perfect combination of the open sea and calm rock pools, perfect for the whole family. Not only does a swim in El Caletón recharge your batteries but also offers you the chance to see one of the most beautiful historic centres in the Canary Islands. 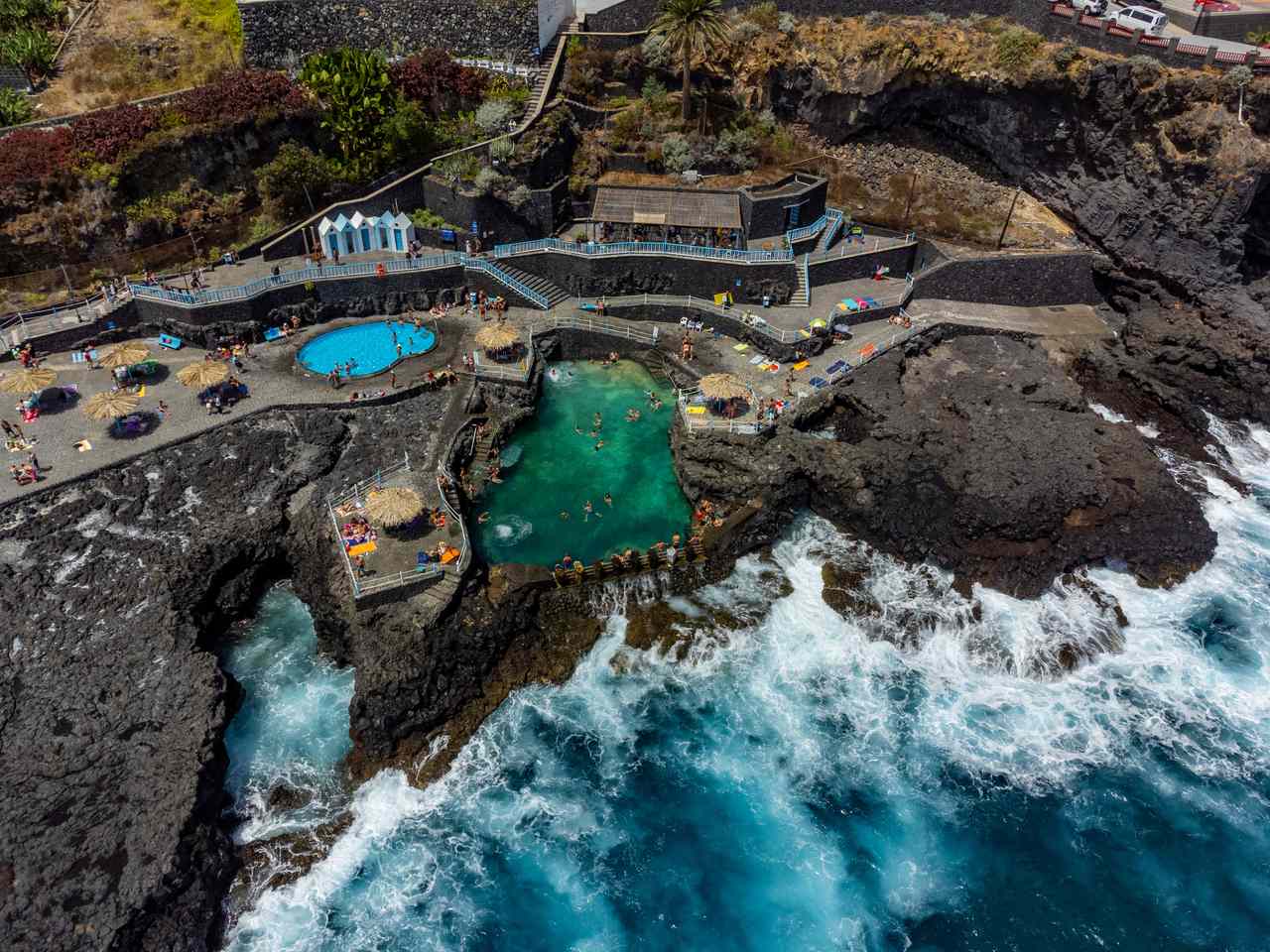 The Charco Azul in La Palma offers a unique way to enjoy the sea. Based in San Andrés y Sauces, this natural pool is one of the prettiest boroughs in the north of the island. It’s a perfect setting to enjoy a day of sea and sun with the family in stark contrast to the rich greenery of the nearby forest. Bathers are protected from the large waves of the sea by huge rocks.

There’s a flat bottom which is great for kids, railings, steps and even a tiny waterfall and a sunbathing zone. Nearby showers and changing rooms and parking make Charco Azul in La Palma a popular place to bathe.

This natural pool was awarded an international prize in 2013 for its features such as steps, railings, changing rooms, security measures, green areas and parking. 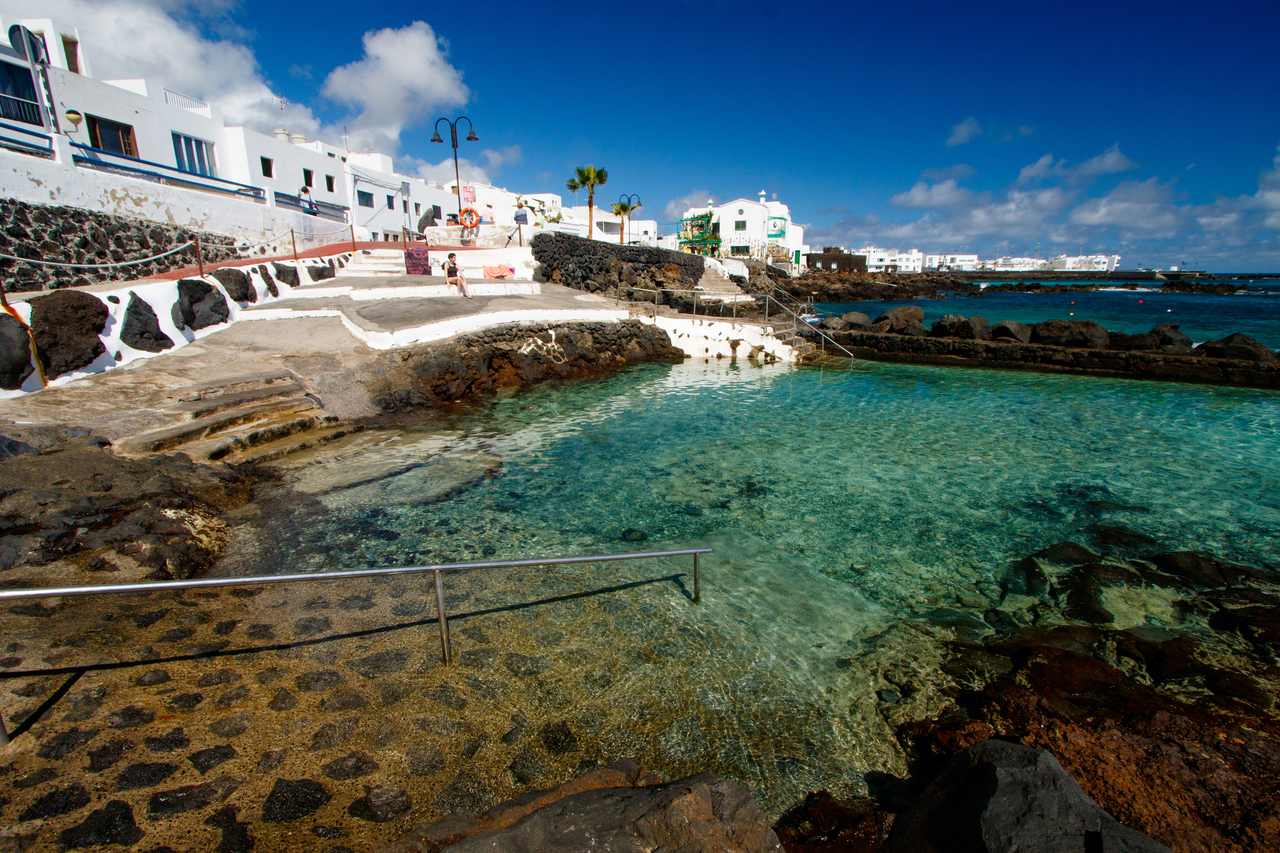 Punta Mujeres means “women’s point” and is so-called because women used to wait there for their husbands to return from their fishing.  There are two kilometres of multiple diverse natural swimming pools that comprise Punta Mujeres, in the northeast of Lanzarote, 30km from the capital Arrecife. It is still a reference point on the island but yet so easily missed.

In a fishing villa of white houses that still maintain the tradition of the area, everyone can enjoy the perfect mix of sun, lava and delightful ocean. Evidence of human presence is only seen in some access steps and sunbathing areas. The rest is pure nature topped with a sprinkle of salt.