Pilgrims taking the many Caminos, or Ways of St James, always end up at Santiago de Compostela and gather in the Cathedral to be blessed. A few carry on to the Atlantic Coast, feeling that this westernmost part of Europe is a more fitting end to their journey. Indeed this was an ancient spiritual route, long before the Catholic Church commandeered it for its own purposes. They were drawn to the sunset at what was then the end of the known world. That’s how it got its name – the Latin “Finis Terrae” translates as Finisterre.

I’ve already walked the classic Camino Frances (The French Way), from St Jean Pied de Port to Santiago and was disappointed by the crowds of people on the trail. When I set out from the city going west, numbers are far fewer, and it’s an altogether more pleasurable experience. It’s going to take three days to get to Cape Finisterre and then another couple of days to the fishing village of Muxia, a place once sacred to the Celts.

In late October, there’s a moist drizzle as I negotiate my way out of Santiago but I’m soon plunged into oak woods with the bracken turning all shades of brown. The route takes me through tiny hamlets, crammed with Hórreos, distinctive stone granaries raised on pillars above the ground, still used for storing corn husks.

Three quarters into my first day I reach the charming medieval town of Ponte Maceira, named after its distinctively arched 14th-century bridge spanning the Río Tambre.

My destination is the town of Negreira, a sleepy little place, although it does have the Pazo do Cotón, a 14th century medieval fortress. It once formed part of the city walls and it makes a fitting exit as I set off next morning.

Rain is forecast, even though it starts sunny, and the clouds open as I climb out of the town. Unlike the Camino Frances, cafes and bars are in short supply, so there’s little shelter.

Today is mostly on roads and I feel distinctly gloomy as the drizzle saturates my clothes. Fortunately, there’s a scattering of other hikers along the way who are feeling equally miserable. There’s a strong sense of solidarity as we battle the elements but a strong west wind picks off the faint-hearted. From the highest point at Monte Aro, I can just about make out the lake created by damming the Xallas River but everything else is shrouded in cloud. It’s all downhill to the small village of Abeleiroas from here. 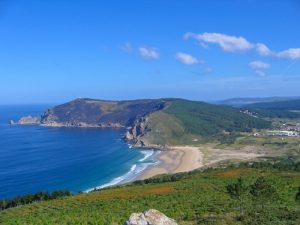 In the morning, there’s a change in the weather and the sun is poking through the clouds. Most of the day’s walking is now on dirt tracks, giving my feet a welcome rest, and the first part follows the Xallas River, lying in the valley below. I climb steadily to the tiny hamlet of Hospital, named because it once provided care for pilgrims and then reach a crossroads. The right branch goes to Muxia, but my way leads left to Finisterre. There’s a pair of battered boots balanced on the stone marker, but no sign of the owner.

The small chapel of Nosa Señora das Neves, built in the 18th Century, makes an ideal picnic spot before the final climb through the pine groves to the Cruceiro da Armada. From there I see the Atlantic for the first time and even a glimpse of Cape Finisterre. Cee is a small seaside town with a wide promenade where couples hold hands at sunset and there’s seafood on the menu.

I walk along the shore through the neighbouring town of Corcubión then cross the peninsula to rejoin the sea on the other side. Here the wide expanse of Langosteira Beach gives me the opportunity to dip my feet into the ocean and I’m soon in Fisterra, or Finisterre. There’s a small harbour, crammed with fishing boats, and the streets are cobbled and narrow.

Later in the day, I join the day-trippers at Cape Finisterre. As you’d expect there’s a lighthouse here, along with a gaggle of souvenir shops. I’m waiting for sunset, as it’s a cloudless evening, and weary pilgrims are gathering. Tradition has it that you burn your clothes here as a symbol of purification but a sign says fires are prohibited. However, just below it, there are the charred remains of someone’s boots and lower down, hidden in the rocks, I see plumes of smoke rising.

I’m not setting fire to my gear as I’ve still two more days walking to get to Muxia. The way takes me through unspoilt countryside where men still use donkeys for harvest and stooped old women tend their sheep.

I soon reach the ‘Coast of Death’ at Rostro Beach where vigorous breakers make swimming impossible. A vertiginous thin path leads me through the gorse, with the sea pounding the rocks below. The small village of Lires, just inland, is my home for the night.

I’ve grown addicted to the wildness of the coast, so next day I leave the Camino which goes overland, and sample the Camino dos Faros, the Lighthouse way. The hotel owner has warned me against this, saying that it’s a hard 30km walk and I may get lost. I struggle to find the track but, more by luck than judgement, I finally reach the Touriñán lighthouse. This is further West than Cape Finisterre and in November 2002, the tanker Prestige was wrecked in heavy seas and leaked 70,000 gallons of oil into the Atlantic.

From here on, the way is challenging, all ups and downs, but gives me access to deserted bays where my only companions are seabirds. It’s getting late and I’m beginning to think the hotelier was right but at last I see the pastel shades of the houses of Muxia. They’re jumbled on a narrow peninsula, surrounded by the thunderous sea, and it really does look like the end of the world.

Legend says that St James preached the gospel here, apparently helped by the Virgin Mary who arrived in a boat. After his beheading by Herod, his body was brought back, but only discovered many years later and taken to Santiago. The Nosa Señora da Barca (Our Lady of the Boat) church was built to commemorate the Virgin and sits right by the sea. In front of it are huge boulders, a place of spiritual and physical healing. The Pedra de Abalar, or rocking stone, is famous for its curative powers, but my feet are beyond help.

PACKAGE: A 6-night package walking the Camino Finisterre from Santiago with Follow the Camino costs from £450 per person sharing, including standard accommodation, dinners on walking days, luggage transfers and holiday pack with pilgrim passport, route notes and maps, as well as access to 24/7 support. Hotel upgrades in bigger towns and airport transfers are also available.

FLY: Vueling flies direct to Santiago daily from Gatwick. Single flights start from £23.45. Vueling is a member of the International Airlines Group (IAG) and offers low cost and flexible travel to over 100 destinations, operating from 8 regional airports across the UK and Ireland.

Disclaimer: this article is sponsored by One Foot Abroad