The food stereotypes of the Soviet Union are long gone and in their place is a mouthwatering mix of organic produce, farm to table restaurants, and a twist of New Nordic cuisine from across the water in Scandinavia.

We set out on a gastronomic road trip to uncover some of the region’s most authentic restaurants.

The Estonian capital, Tallinn, centres on its UNESCO World Heritage Old Town, a perfect picture postcard scene of cobbled streets, fortified walls, and church towers. It’s as beautiful as Prague but without the hoards of tourists.

To get the most out of a gastronomic tour get there in the spring. The growing season is very short and so using local ingredients can pose a challenge for chefs during the winter months. But that makes the first flavours of spring all the more intense when they do finally arrive.

Chef Rene Uusmees has his restaurant Mekk on Suur-Karja street in the Old Town. Rene served our main courses — a delicate steamed fish with fresh herbs — with great excitement and pride: each plate bore two tiny new potatoes, the very first to be ready this season. No one else in the city seemed yet to have local potatoes on their menu, but Rene had his source, a farmer who’d nurtured his potato plants since the spring thaw and then rushed the earliest crop to MEKK.

Standing over our table, poised with a bottle of cold white wine in one hand, he explained the heart of his philosophy. “If you have been kidnapped and blindfolded,” he began, somewhat ominously, “and you are flown around the world, you should know when you taste your very first meal exactly where you are and what time of year it is.”

Game is under-utilised and under-appreciated in European cooking these days, but Estonia’s forests are rich in boar, deer, and birds. They roam wild, and their diet and lifestyle is completely organic.

At Restaurant Farm, the chefs have gone deep into Estonia’s forest and looted their grandmothers’ recipe for culinary inspiration and added their own quirky twist. As you enter you are greeted by a diorama of stuffed wild animals — fox and boar, wolf and hares, different species of birds. Their brethren are served up in all manner of delicious combinations and you can watch them prepare their dishes in their open kitchen. 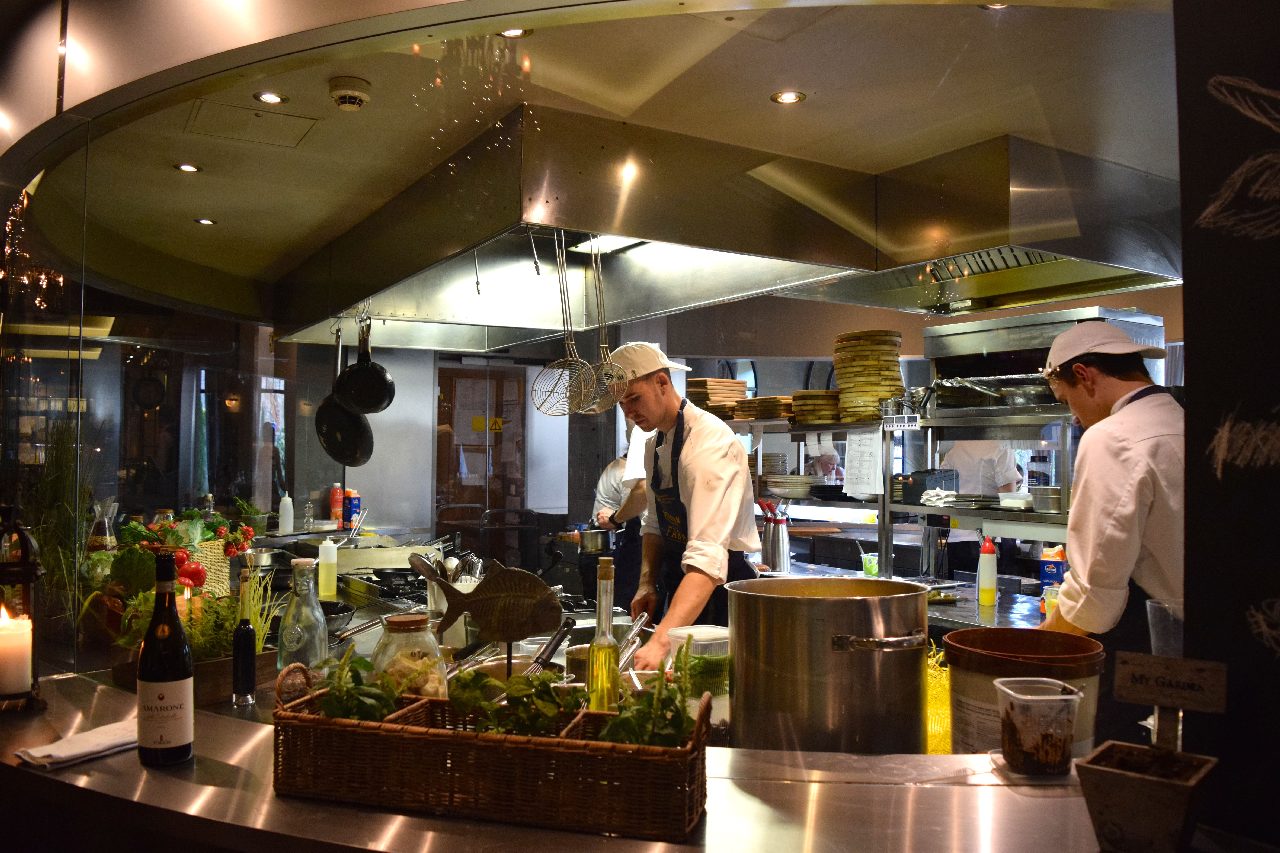 The rich game broth is smoked, grilled venison is served with black garlic and reindeer lichen, and the game cutlets are accompanied by a ragout of chanterelle mushrooms. Each flavour is intense, but perfectly balanced within the dish so that no one taste overpowers the others.

At NOA Chef’s Hall you get to learn as you eat. Head Chef Orm Oja works at a bench, and in front of him are two bar stools. These two seats are the most sough-after seats in the city, and just one of the reasons that NOA has been repeatedly included amongst The World’s 50 Best Restaurants. 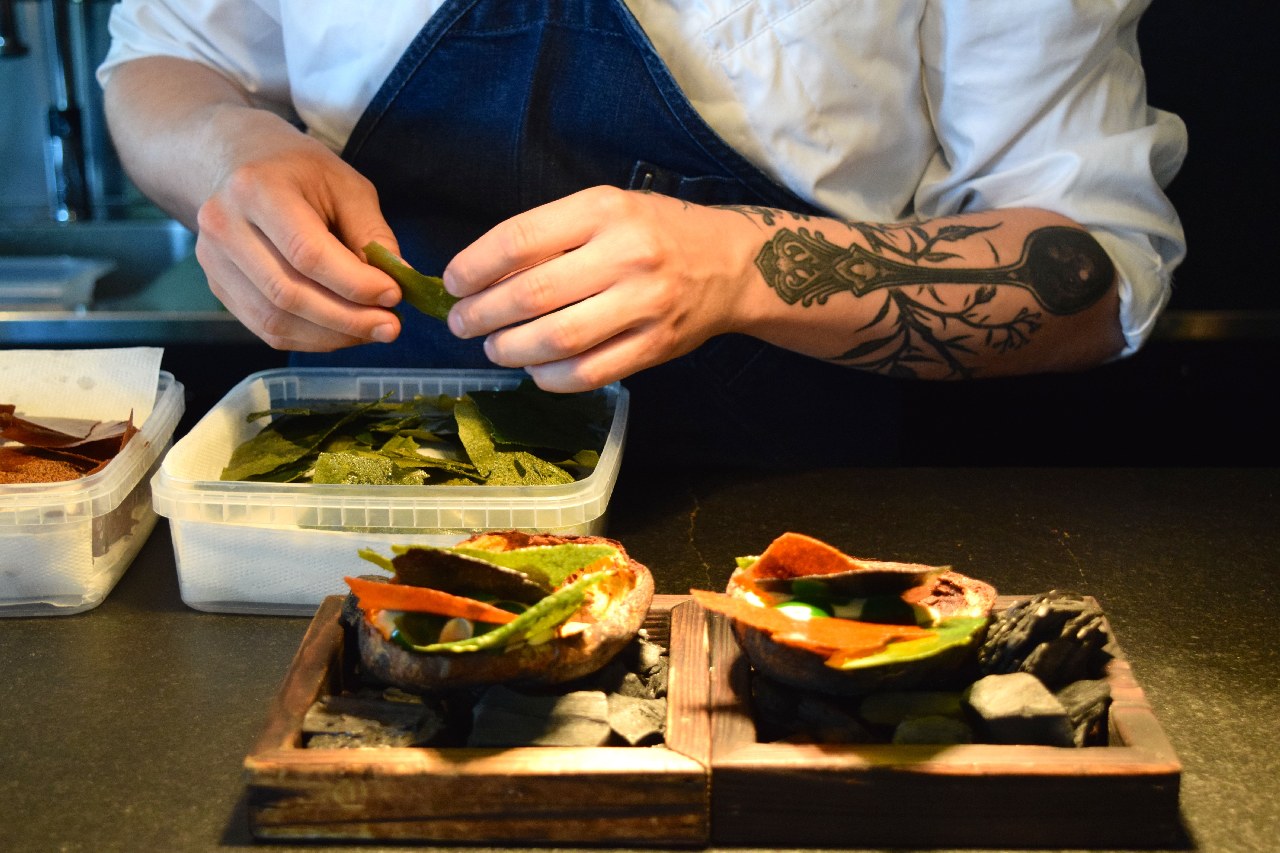 Talking constantly as he worked, Orm gave a fascinating stream of instructions and advice. “If you serve a nice spring or summer vegetable like asparagus, you should first dress it in pig fat,” we learned. “If you pick the leaves off chervil, you’ll be left with delicate little trees.” The menu came with pencils for note taking and by the time the meal ended there was hardly an inch of paper left to write on.

We lost count of the number of courses on the tasting menu, but a few stood for sheer culinary ingenuity. Diced scallop was coloured with squid ink, turning it from creamy white to inky black and so tricking the brain so the flavour seems more intense. Fire potatoes, crispy fish skin, fried so that it had the texture and taste of a particularly decadent prawn cracker, was presented on a bed of bleached white fish bones and graphite coloured pebbles.

The contrast in colours and shapes was striking. And then there was asparagus, buried beneath mouthwatering crumbs of bacon and the thinnest shavings of truffle.

Riga, the biggest metropolis in the Baltics and the capital of Latvia, is known as the Art Nouveau capital of Europe. Designers often take their inspiration from nature and from the ornate aesthetic styles of Japan.

Pride in the city’s aesthetics permeates every aspect of life, including Riga’s food scene. 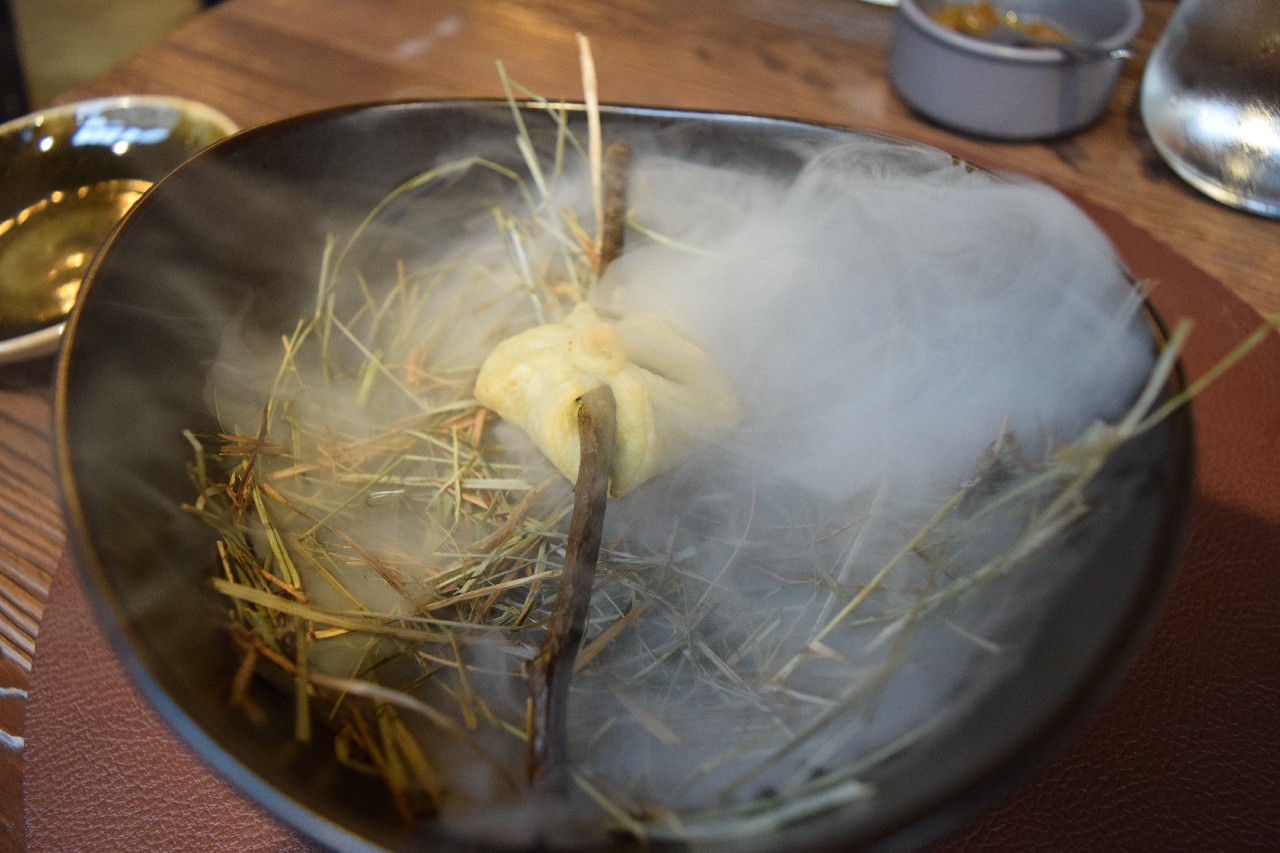 Juris Dukalskis, Head Chef at Restaurant 3, seems to have taken a leaf out of Heston Blumenthal’s book: parcels of cheese wrapped in crisp pastry arrived on a bed of smoking hay; and the fish ravioli were presented atop a bowl of perfectly smooth grey pebbles and amid a cloud of liquid nitrogen coloured with ash.

In spite of the theatrics, Restaurant 3 doesn’t actually feel pretentious: the decor is simple and hip and the staff were happy to chat about the food.

The same is true at Valmiermuiža’s Embassy, a little outside the Old Town, where artistic black and white photographs add interest to the monochrome interior.

Though named after a brewery, Valmiermuiža’s is a restaurant, though it does serve draught beers that are brewed in the north of Latvia using 250 year old techniques. Diners are encouraged to try them in new ways. We opted for the signature beer tasting menu, where every dish was paired with a different beer and, in one remarkable case, a beer cocktail. Drinking like this might well horrify the beer purists, but if brought out unexpected flavours in the food.

Tiny Lithuania, a patchwork of wetlands and mixed forest, intersected by rivers and streams, clings to Europe’s Baltic shore.

We arrived via an unofficial route: a muddy track through the forest from neighbouring Latvia cutting a good 100 km off our journey to Ilzenbergas Manor, our first stop in the country.

Ilzenbergas Manor was built in the early 16th century as the home of a wealthy trader who made his money selling grain, butter, spices, and tar. Today its raison d’être is to produce affordable, high quality organic produce for the local market. The hens and geese provide eggs; milk is pasteurised for drinking, and also turned into butter and cheese; and whole grains grown on the farm are baked into bread with natural-yeast.

Taking lunch in the barn with farm manager Gintaras, we had the chance to taste a little of the manor’s output — cured meat, white cheese, and kvass (a slightly fermented drink made from rye bread). It was simple, homely fare, but indisputably good.

In Kaunas, Lithuania’s second city, we sought out Vista Puode, Kaunas’ leading farm to table restaurant. Proprietor Egidijus Trumpa, though indisputably Lithuanian, has the air of an Italian restaurateur. His business is a family affair — his wife and elder children work in his restaurants — and food and wine are hugely important to him. He’s larger than life, with dark curly hair and an infectious passion (and occasional seriousness) for the food he puts on the plate.

Egidijus serves the food he enjoyed as a child. He tells us that his grandmother’s dishes were far better and that he can’t quite replicate her recipes, but we’ve a sneaky hunch that it is his nostalgia talking: the food tastes pretty wonderful to us. 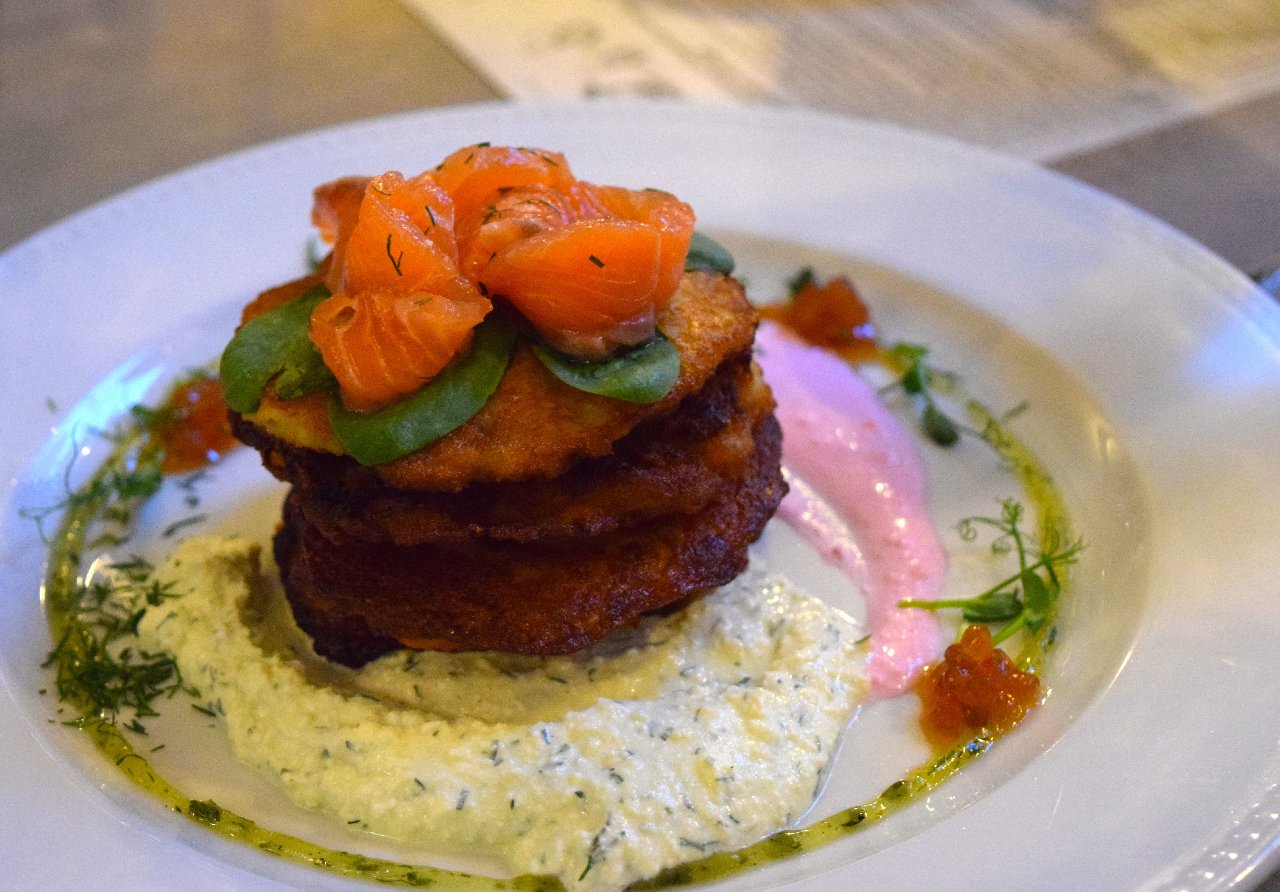 The highlight of the evening is a very Lithuanian dish indeed: potato latkes (shallow fried pancakes) served with sour cream and topped with cold smoked trout. There’s a sprinkling of caviar too, though mostly for its visual appeal rather than its flavour.

It’s an incredibly wholesome dish, the kind of thing you’d want to eat on a long dark evening in the village. The grated potato is crisp on the outside, but still soft inside, and it smells divine. We ate, Egidijus talked, and the local beer and wine, made from Lithuanian berries as the country is too far north for vineyards, kept flowing.

It is not a cuisine which will easily travel — the local, seasonal, and organic ingredients are what set it apart — so there’s nothing for it but to travel there in person and feast on the local flavours, one succulent bite at a time.