Slovenia: A guide to Lake Bled

Lake Bled is a European gem, surrounded by a forest and nestled below the snow-capped peaks of the Julian Alps. A landscape that has escaped from the pages of a fairy tale. 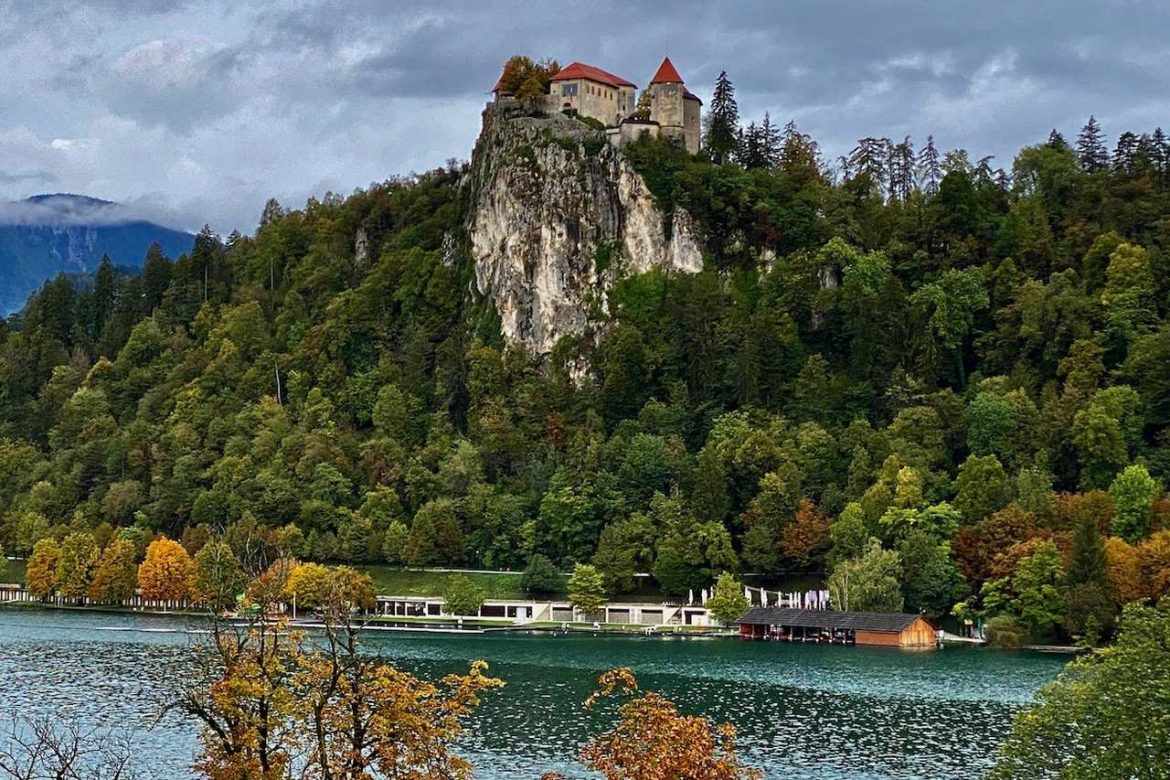 Slovenia’s Lake Bled is a glacial lake fringed by a pretty town, also called Bled. A medieval castle balances on top of the craggy cliffs that rise up from its shore.  And it even has its own small island with a church at its centre featuring a Wishing Bell. The ideal place for those looking for a peaceful break or an action-packed holiday.

The main promenade on the lake is lined with colourful cafés interspersed with vibrant souvenir shops. Most of these shops have pyramid displays of decorated jars full of local honey.

A popular purchase for visitors as the area is famous for its bees and their produce. Bee-keeping is a traditional activity in Slovenia and was pioneered here. It is home to the Carniolan honeybee which is described as an “exceptional diligent, peaceful, modest bee with a great sense of orientation.”

These bees certainly produce delicious honey. The painted decorative panels from the fronts of the beehives are a special souvenir from Slovenia. 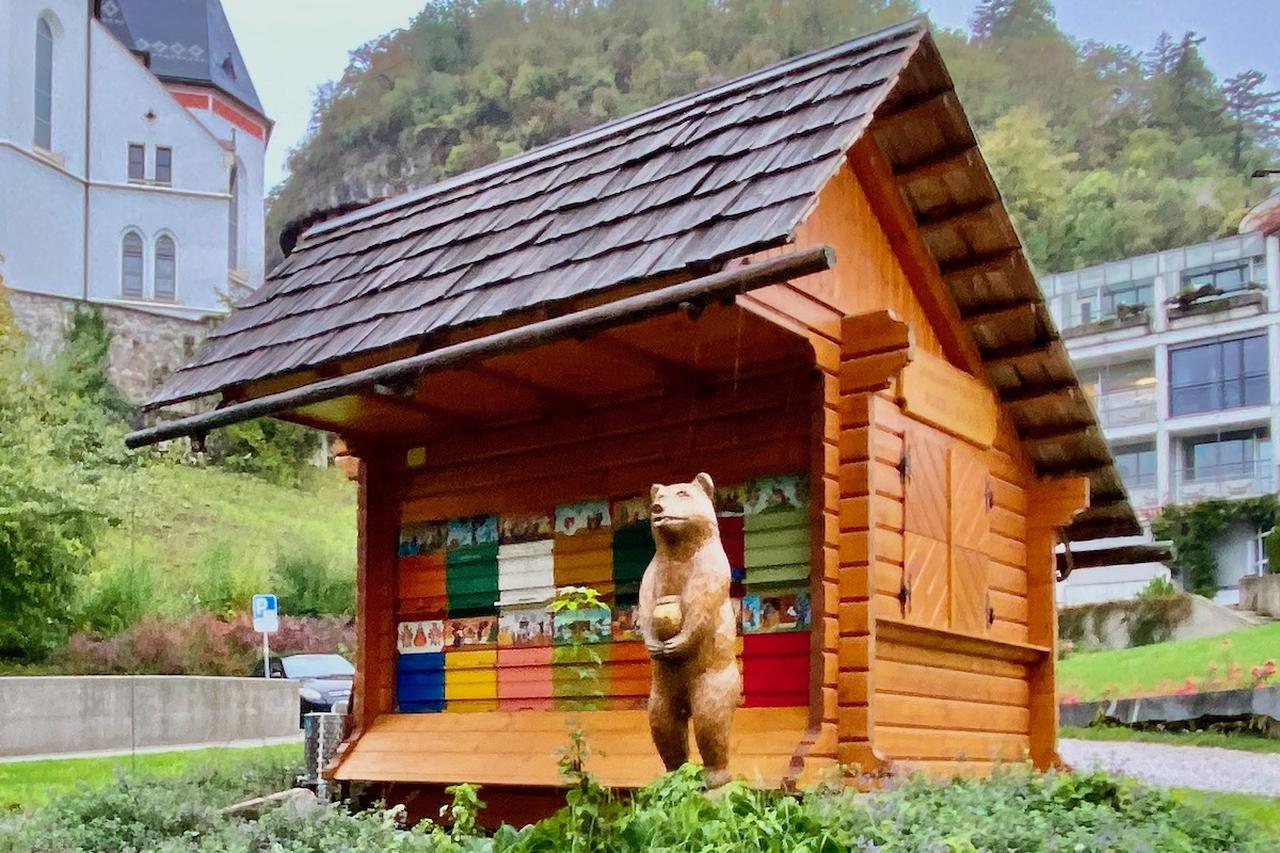 A circular walk around the lake starts from the main promenade in front of the town. Beside this path as it heads towards the island at the far end of the lake are several moorings of the local wooden boats known as pletnas.

Pletna boats are a tradition of Lake Bled and date back to the end of the sixteenth century. These flat-bottomed wooden boats are distinguished by their colourful awnings to protect passengers from sun and rain.

A pletnar navigates the boat which is a skill that was originally passed down through generations of local farmers who were granted ownership rights for pletna boats. For this reason, the profession of Pletnarstvo has stayed with individual families for centuries.

The boat has a pointed bow and a wide stern with a step where passengers enter – up to a maximum of eighteen people can travel in one boat. The oarsman stands on the stern and rows with two oars. Pletna boats are the most popular conveyance to cross the lake to Bled Island. 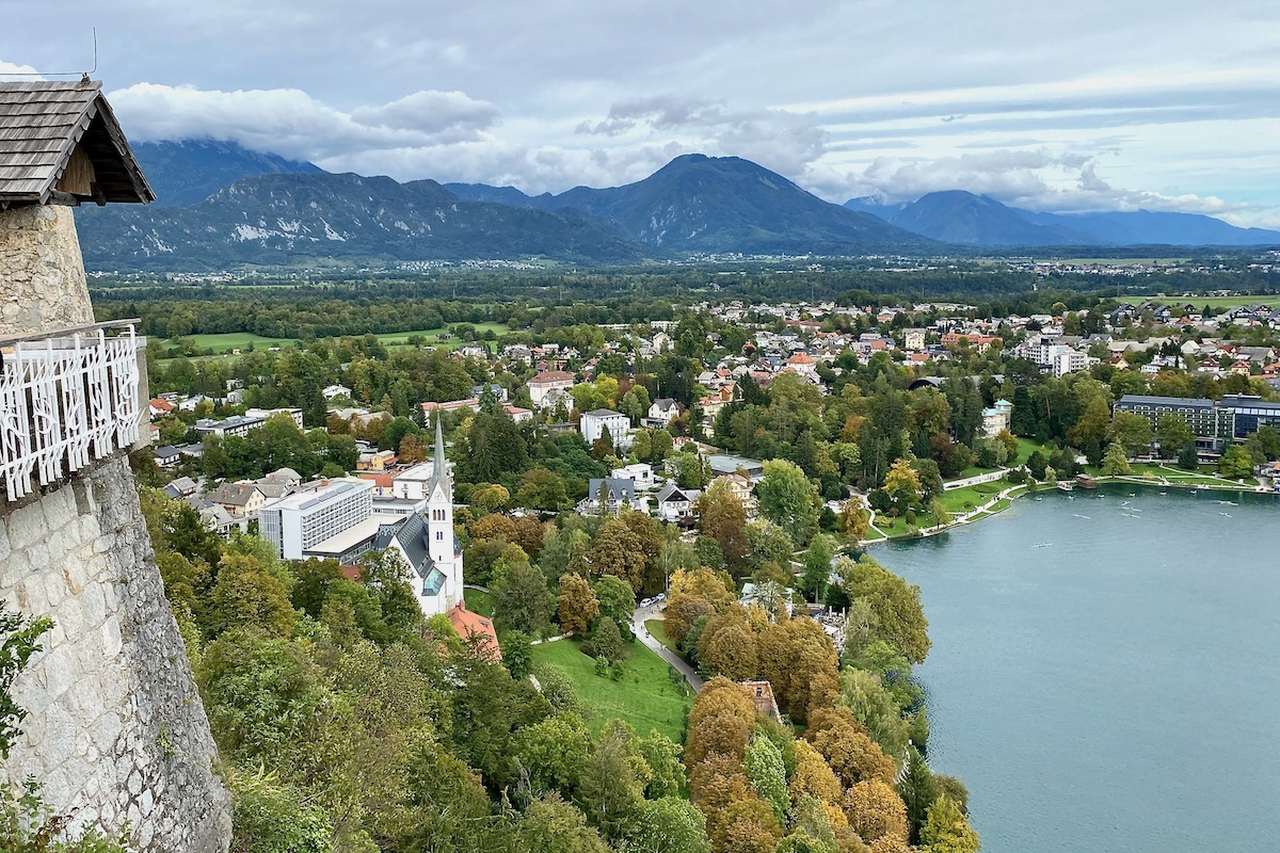 View of Lake Bled from castle

Arriving on Bled Island visitors have the choice of walking up a long, wide flight of stone steps or taking the path that encircles the paved courtyard in the centre of the island. This tiny island is home to the Church of the Mother of God on the Lake. There has been a brick church here since 1142.

The present, restored church, was built during the seventeenth century. A popular feature of the church is the Wishing Bell and tolling this bell three times will grant the wish of the bell ringer – according to legend. Next to the church is a fifteenth-century bell tower that has been renovated several times.

Climbing up this tower, visitors can admire the mechanical oscillation clock installed inside. And from the top, a beautiful panorama of the lake below. There is also a good view of the famous Villa Bled on the opposite shore. 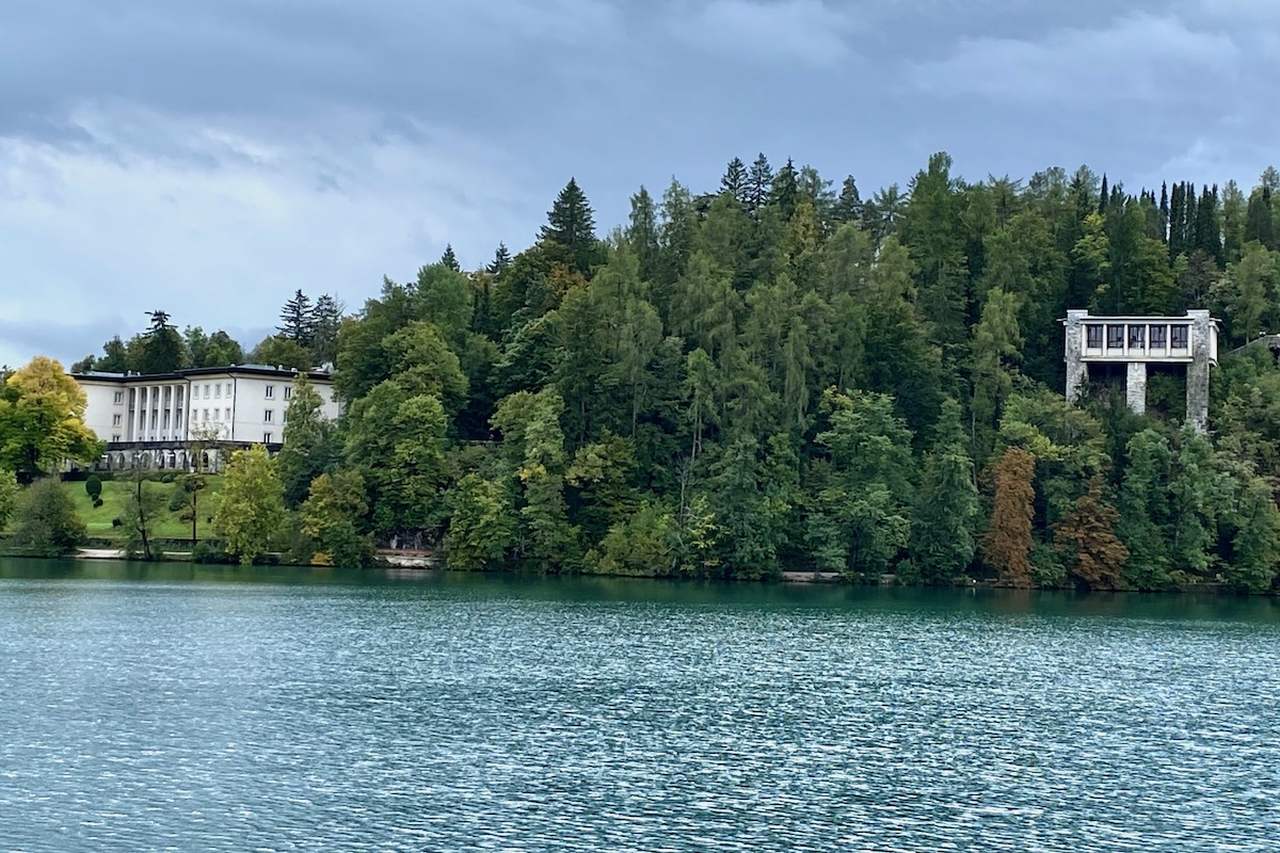 Villa Bled and Pavillion on Lake Bled in Slovenia.

In bygone days Lake Bled was a favourite with Austrian aristocrats as evidenced by the attractive villas that still grace the area. However, its most famous summer resident was President Tito, the communist president of Yugoslavia. He acquired Vila Bled after the Second World War and used it as his summer residence for many years.

It was here he entertained some very famous guests. The villa is surrounded by parkland. In this park is the Belvedere Pavilion, a tea house set on pillars and used by Tito for his tea parties. Today the pavilion is a café and Vila Bled is an exclusive hotel. The path around the lake goes through the Vila Bled park before arriving at the Olympic Rowing Centre. 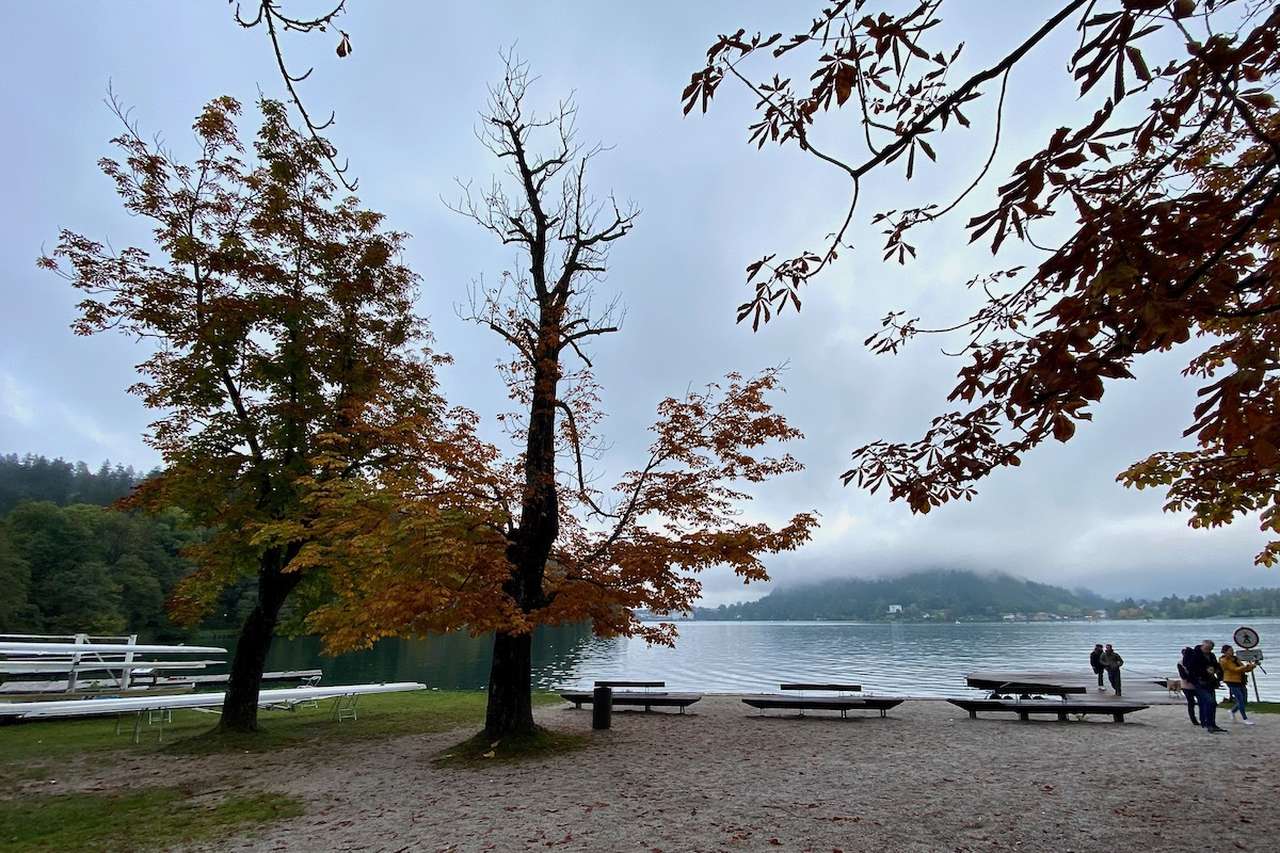 The Olympic Rowing Centre on Lake Bled in Slovenia

Lake Bled is a popular venue for rowing regattas hosting large international events as well as local meetings. The land-locked lake provides perfect conditions for the rowers. All events are based in the Olympic Rowing Centre in a bay known as Mala Zaka. The boathouse boasts a large café with an extensive terrace that is open to the public. This is a good place to stop for refreshments and views of the lake beyond – and maybe watch some racing. Moving on, the more active may be tempted to follow one of the marked walking trails to the next village and beyond into the Julian Mountains. But, the most popular of these paths is the one that winds through the forest to Bled Castle above the lake.

The original castle overlooking Lake Bled was built by the bishops of the estate of Bled to defend the town. But they never lived there. During the Middle Ages, the castle was extended. In the early sixteenth century it was badly damaged by an earthquake and subsequently rebuilt in the style of today.

During a major restoration between 1951 and 1961, the Bled Castle Printing Works were integrated into a building in the lower courtyard once used by the servants. This building also has a tower art gallery that hosts monthly exhibitions. A museum in the upper courtyard relates the history of Lake Bled.

Cultural days take place in the courtyard including the very popular Medieval Days. The most interesting building here is the Gothic Chapel in the upper courtyard which was built during the sixteenth century. The decorations, including illusionist frescoes, were added a hundred years later. There are stunning views from the courtyards and towers across the surrounding countryside. The walk back down Grad Hill (Castle Hill) passes by the parish church of St Martin. 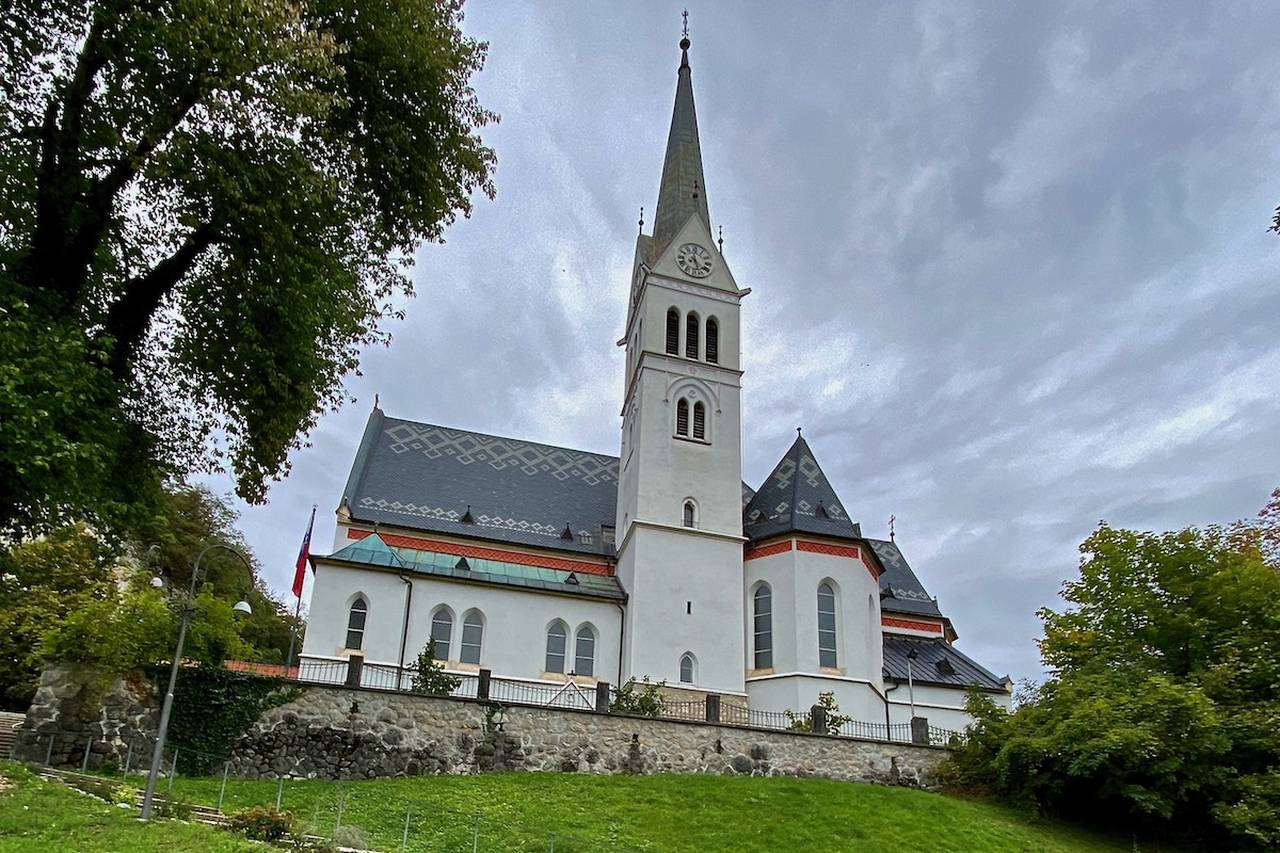 Parish Church of St Martin on Lake Bled in Slovenia

The pretty church of St Martin stands on the shore of Lake Bled and on sunny days casts its reflection across the still waters. There has been a church on the same site since before the year 1000, but the current parish church of St Martin was built in neo-Gothic style in 1905. Some of the walls dating back to the fifteenth century are reminiscent of Turkish invasions. Different styles and periods are featured inside this church and include frescoes painted in the 1930s by Slavko Pengov.

In the same period the great Slovenian architect, Jože Plečnik, designed the garden wayside shrine in front of the church. Close to the church is the Spa Park 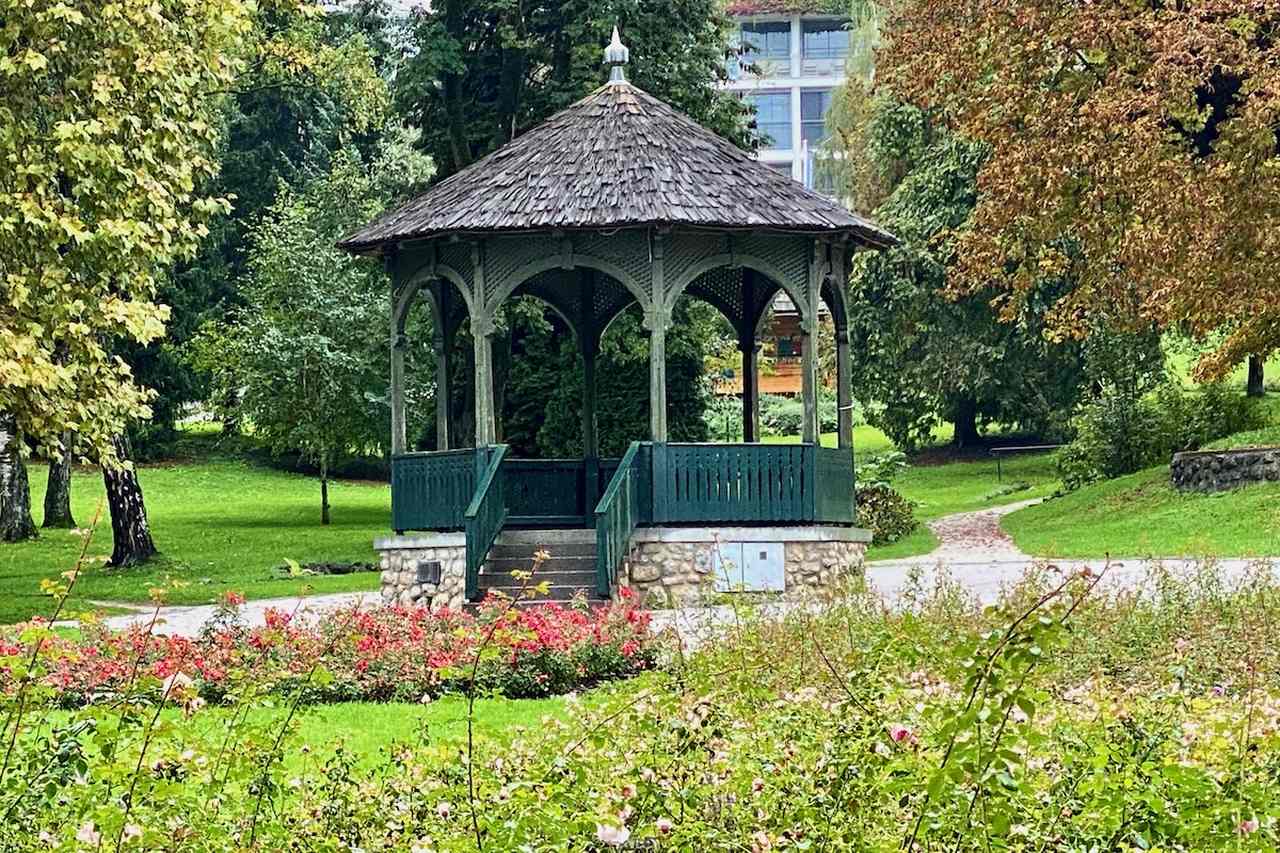 The Spa Garden by Lake Bled in Slovenia

A Spa Park was created around Lake Bled towards the end of the nineteenth century. As well as outdoor exercises it also included some lovely gardens around the Spa House, an elegant pavilion built in 1891 – a place to entertain users of the garden. Arnold Rikli, a Swiss naturopath, was a pioneer of natural healing and one of the first to initiate organised health tourism around Lake Bled during the nineteenth century. His contribution to the town’s global recognition is celebrated with a monument commemorating him at the top of Straža hill. Today this park is also a children’s playground and a site for the local artisan market. Rikli is also remembered in the brand created by Bled combining his principles with a holistic approach to reconnecting with nature. Just beyond the park is the Town Hall of Bled. 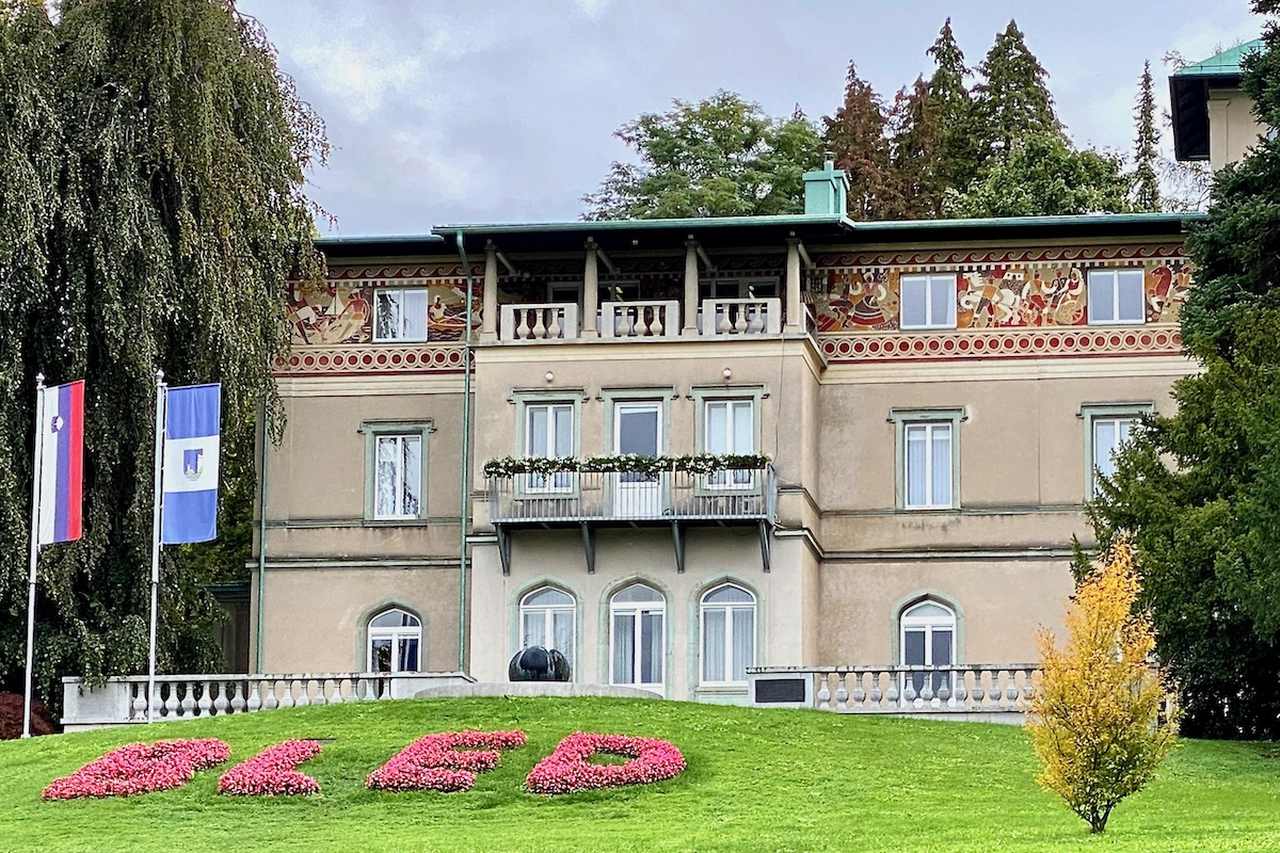 The stylish Town Hall in Bled sits on top of a ridge above the shore of Lake Bled. A wealthy merchant built the original villa in 1853. Although it has been extended and renovated since then it is still the oldest villa of its kind in the area. The rear façade features a series of paintings representing the history of Bled.

Attractions Near Lake Bled in Slovenia 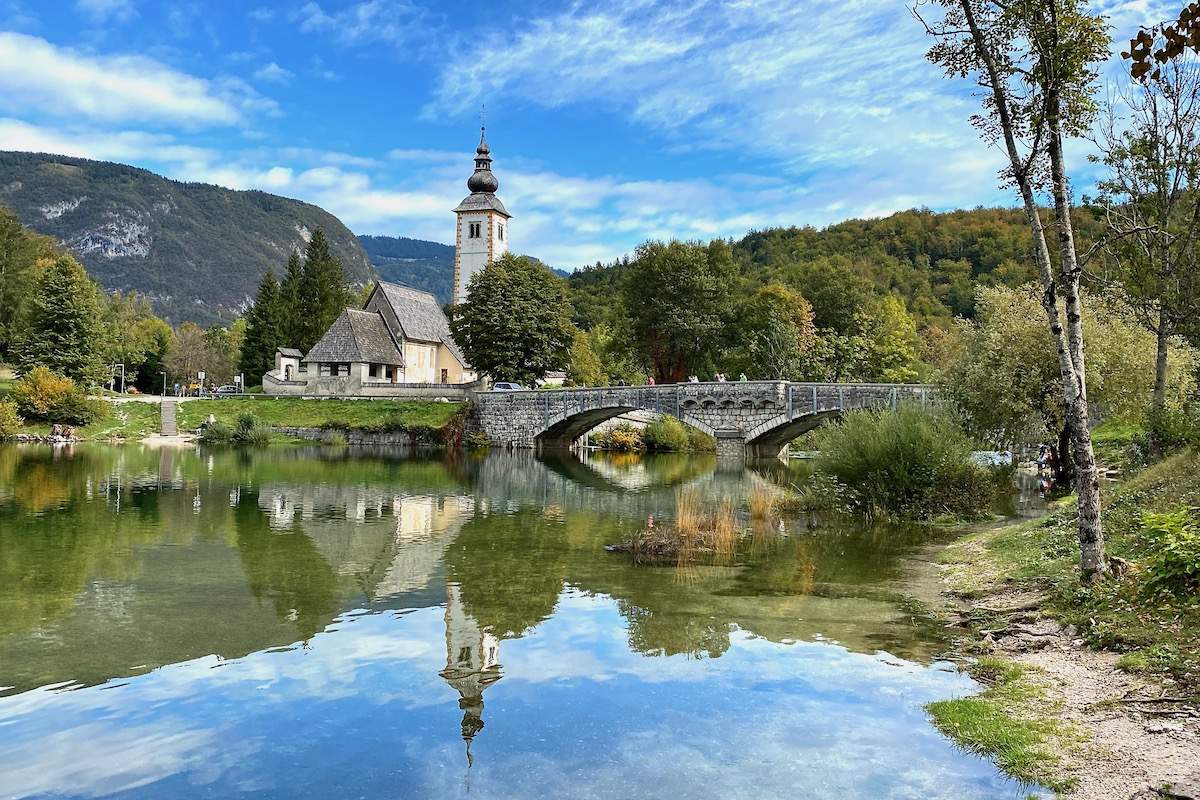 Lake Bohinj, a bus ride away from Lake Bled offers a lovely day out – stroll around the lake, take the cable car to the peaks above the lake to enjoy stunning views and then cruise back on a boat to the bus stop. Ljubljana, the capital of Slovenia is also just a bus ride away – browse the stalls in the market place, climb up to the castle above the town and later enjoy some gourmet delights of this vibrant city.

STAY: Treat yourself to a spa experience in one of the three hotels where the natural thermal springs from Lake Bled fill their pools – Hotel Park, the Rikli Balance Hotel and the Grand Hotel Toplice.

Grand Hotel Toplice also offers the opportunity of a dip in the original thermal waters. At the Živa Wellness Centre in the Rikli Balance Hotel which has the largest swimming pool complex in Bled, treatments adapted to Rikli’s methods of healing are also available.

Q&A: Are the rules on taking liquids through airport security changing?

Kurentovanje in Ptuj, Slovenia is one of the...

Alpe-Adria Trail: From the Alps to the Adriatic...