When the Portuguese settlers arrived on Madeira in the 15th Century, they were struck by the abundance of fennel (in Portuguese: funcho) growing wildly and so named their first colony: Funchal.

This picturesque city has a horseshoe shaped backdrop of verdant mountains rich in colourful subtropical vegetation that look out onto the Atlantic Ocean.

It has remained the capital of Madeira for the last five hundred years and today has its own international airport and serves as a popular destination for several cruise ships.

Read also: Top 10 things to see and do in Madeira

Funchal Market is a busy, noisy, colourful covered market in the centre of Funchal. As you enter the market, you will be enticed by the variety of fresh fish, tropical fruits, spices, colourful flowers and local crafts. Get there early – preferably as it opens at 7am – when the market is buzzing with fishermen cutting chunks of tuna on marble slabs, fruit sellers spreading numerous passion fruit varieties (such as maracujá banana – banana passion fruit) on their stalls and ladies in traditional costumes preparing flower arrangements using the local agapanthus and heliconias. If you are looking for local delicacies to take home with you, look out for Madeira wine or bolo de mel (Madeira honey cake).

The narrow, cobbled Rua de Santa Maria is the oldest street in Funchal, dating back to 1430. When the heavy storms in February 2010 severely damaged the old town, including the Rua de Santa Maria, the municipality launched the project Art Open Doors in order to revitalise the area. They invited local artists to paint the doors in the street and the result is a vibrant, colourful, artistic street, full of shops, bars and restaurants. 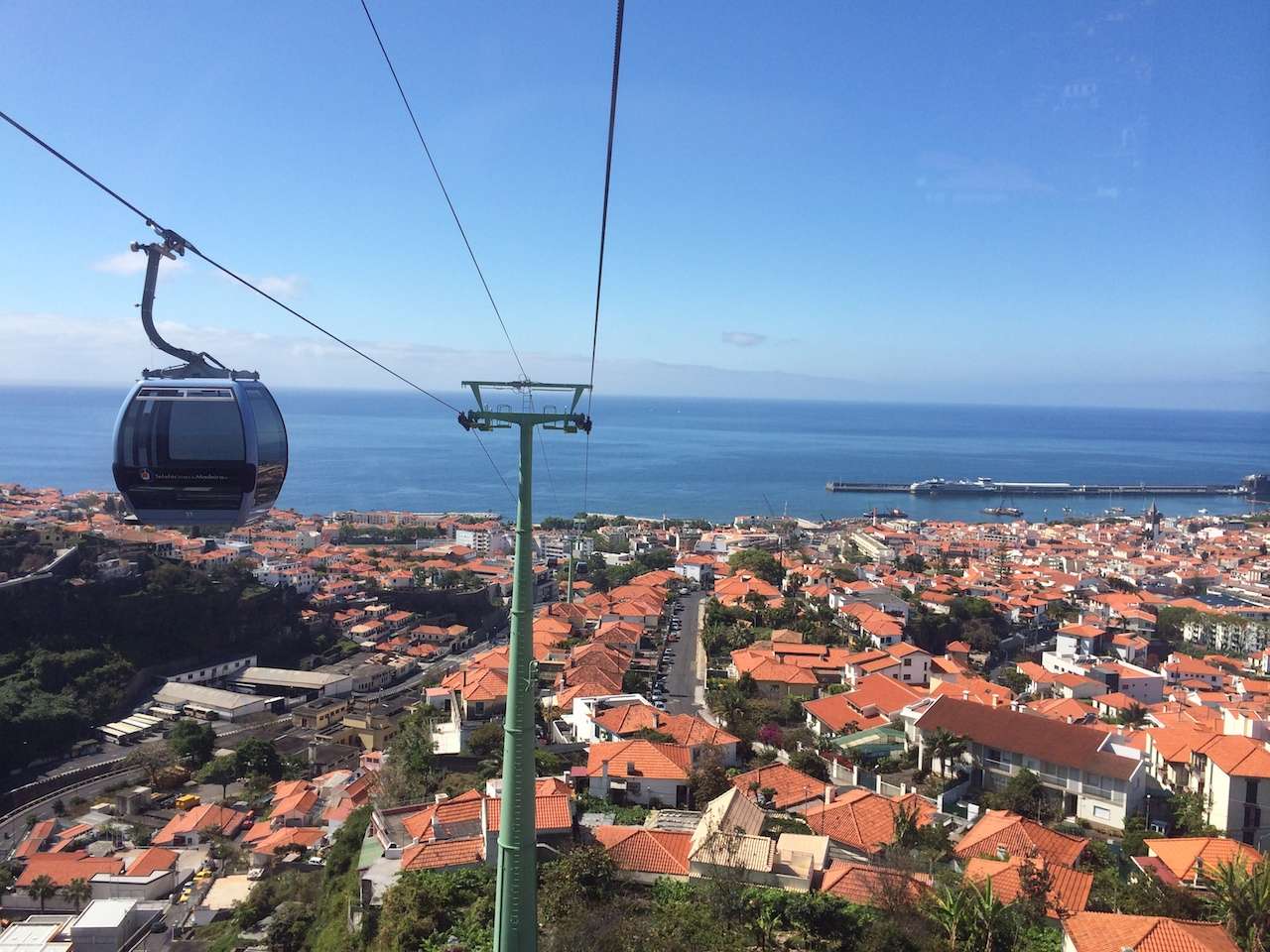 To get the best view of Funchal, take the cable car to the Monte Village. The 15 minute journey takes you 560 meters high above the city, with a 360º panoramic view of Funchal and the Atlantic Ocean.
Price: €10 one way, €15 return.

Tip: take the cable car up and toboggan ride (see below) back down to the city.

Monte Village was built in 1565 as a summer refuge for Funchal’s aristocracy. Constructed in 1741, the Church of Our Lady of the Monte is the resting place of Charles I, the last ruler of the Austro-Hungarian Empire. If you climb to the bell tower terrace you’ll get a spectacular view of Funchal. 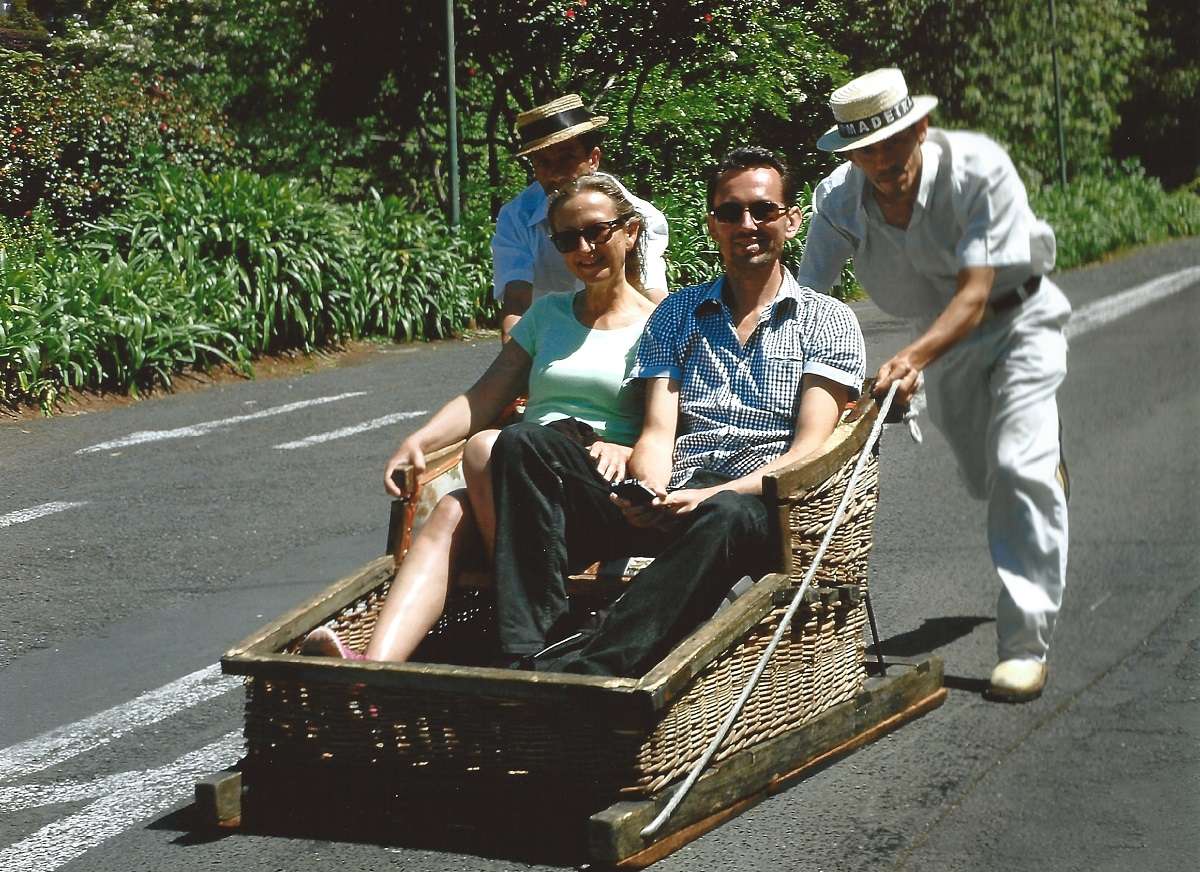 From the foot of the Church of Our Lady of the Monte, you can take a thrilling two kilometre, 10 minute “toboggan ride” to Funchal. In the mid-19th Century this was a fast way for the rich inhabitants of Monte to descend to Funchal. The wicker sledges are now used to transport tourists quickly along the same streets. The sledges are propelled by two men in white clothes, a straw hat and boots with thick rubber soles.
Price: €25 for one person, €30 for a couple, €40 for three people.

Tip: Taxis waiting at the bottom of the ride will charge you 3 or 4 times what the normal price would be to take you to Funchal city centre. Instead, take the bus or walk (it’s a 20 min leisurely downhill stroll).

A good choice for homemade, traditional food in Funchal in a friendly and relaxed atmosphere is Venda da Donna Maria in Rua da Santa Maria street.

For the starter, try bolo do caco, hot bread with garlic and parsley, lapas, grilled limpets with garlic and lemon, or picados, cubes of beef steak in sauce served with fries. For the main dish, go for the espetada, skewers of beef rubbed with salt and garlic and grilled on bay leaves. Madeira being an island, fish lovers will not be disappointed and should try the local specialty, scabbardfish with fried banana (espada com banana). Traditional Madeira desert is the delicious passion fruit mousse (pudim de maracujá).